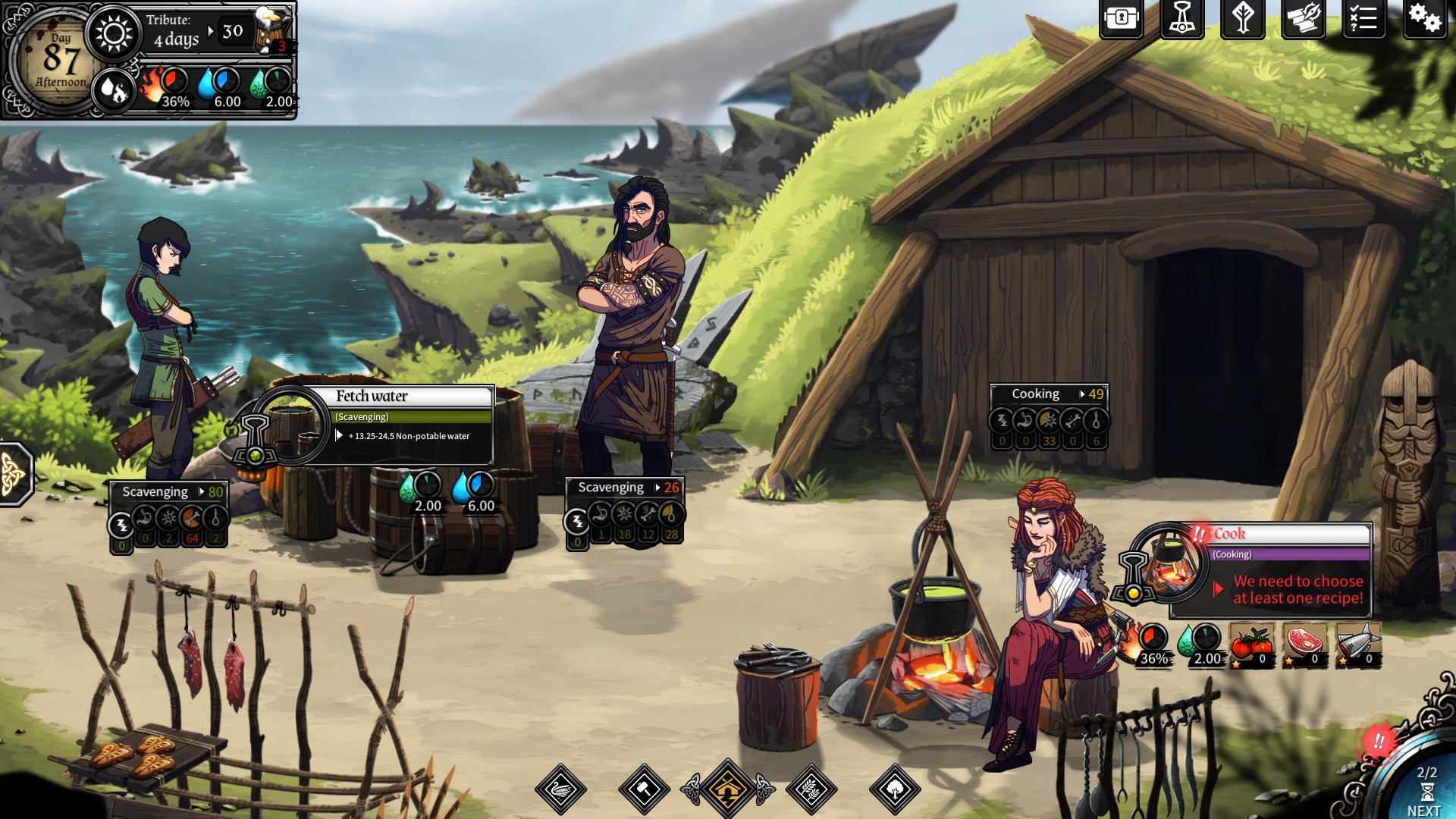 Dead In Vinland is a turn-based resource management game, with some turn-based tactical combat, and a choose-your-own-adventure type of dialogue. The game tells the story of a Viking family that was exiled from their home for reasons unbeknownst to them. The family is comprised by Erik, the father, who lives with a strong sentiment of guilt because he blames himself for the exile of his family, the caring mother Blodeuwedd, the amusing Moira, and the adventurous youngling Kari.

Upon finding themselves stranded on a strange island, the family has to fight not only in order to survive but also in order to remain sane. This is where the main core of the game comes into place, with the player having to manage a series of stats in each character while striving to keep their camp and everyone in it well maintained. The most critical part in this whole thing is managing your campfire, which needs wood in order to keep going, and it’s most needed for boiling water so that you can drink it, and for keeping you warm during the night. Food is also equally important, mostly because it tends to rot during the night, but overfeeding someone just so that you can make the most out of your food stocks might make them sick, or that specific food type might have some undesired side-effect. Still, you have to balance out your odds, because having someone hungry or dehydrated will impact how well they perform their tasks during the day.

Each day is divided into three different phases or turns if you prefer to call them that. There are the morning and the afternoon, and here you’ll be able to assign tasks to each character on the camp, and then there’s the night where they can talk to each other, eat, drink, and rest, in order to prepare for the next day. There are plenty of tasks that each and every person in your camp can perform, from chopping wood, to crafting items, building new facilities in your camp, harvesting berries, scavenging for resources, and even exploring the island in order to unlock new locations that you can visit. All the while, you’ll also have to keep an eye out on the condition of the various structures on your camp because they deteriorate over time, so there’s this constant need to keep a tab on things in order to make sure that everything is fine. 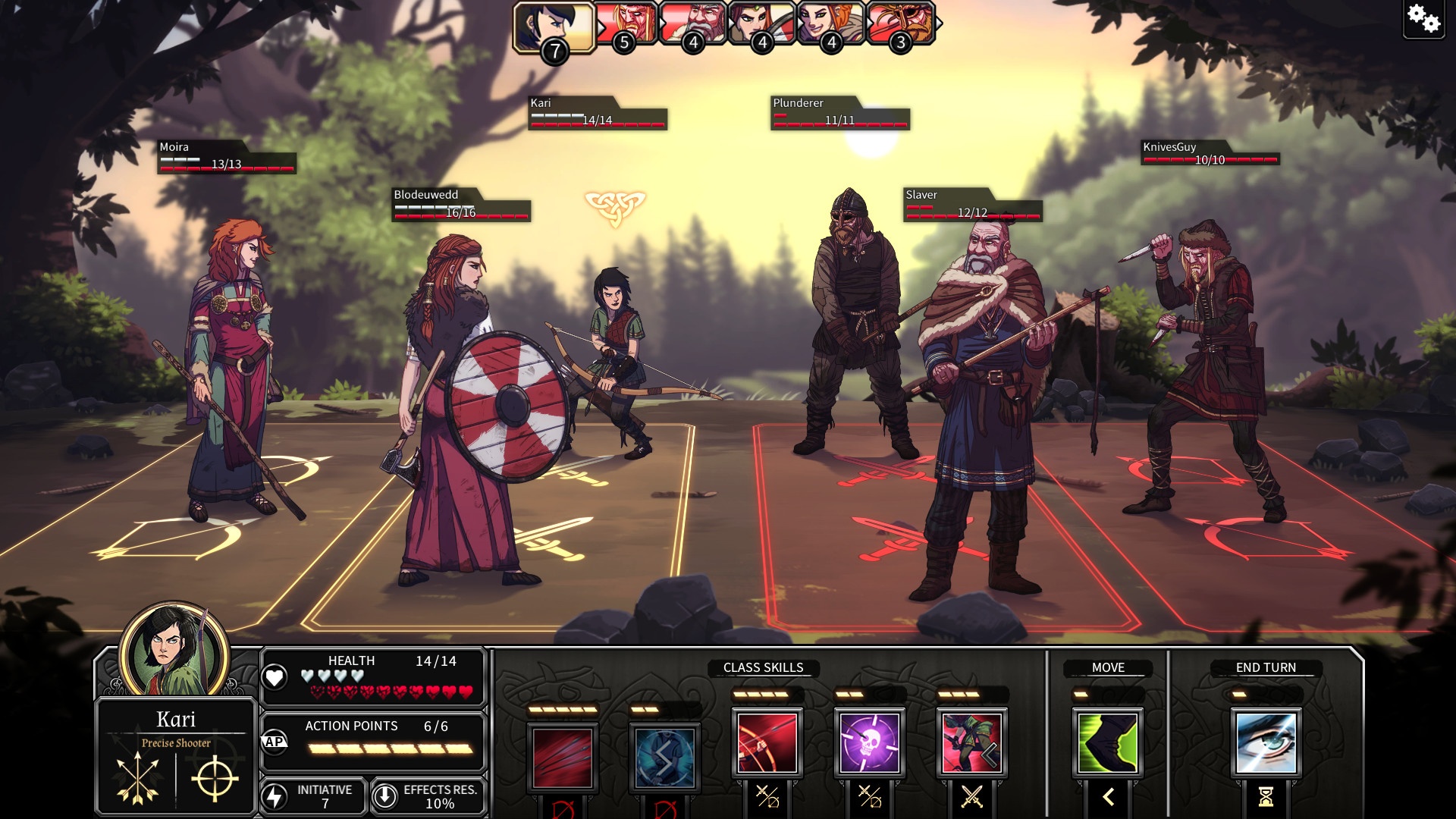 The game has a very strong choose-your-own-adventure gameplay style going on for it, with pretty much every single choice that you make affecting someone or something in some way. For example, choosing to undergo through hard labor, like woodcutting, might make that person feel depressed, which translates to a status effect that lasts for a few in-game days. How you approach every event that the game throws at you will impact in character in a different way, and most often than not, what seems like a good choice might turn out to be quite the opposite. With that said, the outcome of your choices depends based on several variables on each character, but the game will always show you the probability of you actually succeeding on any given task.

Right from the very start, one design choice that I found to be rather curious was the fact that, unlike most games, each character doesn’t have a health bar that indicates how closer they’re to dying, but instead, you’ll have to keep an eye out for each character’s fatigue, hunger, sickness, injury, and depression values, because if any of these reaches 100%, that character will die. On that note, while there are other characters that you can recruit to join your camp, losing any member of your family will result in a game over, which I find to be somewhat disappointing, as it would’ve been interesting to see how the family would react to the passing of one of their loved ones.

Each character has their own strengths and weaknesses, some are more proficient at harvesting natural resources or exploring, while others are better at healing or hunting or are highly charismatic. Depending on the situation, choosing one character over the other might be the difference between success or utter failure, and it’s worth keeping an eye out for each character’s condition, as the health of each character negatively affects their performance. Nonetheless, these attributes improve over time whenever you use them, so it’s up to the player if they rather play it safe with an already developed character or if they want to try and balance everyone’s skills. 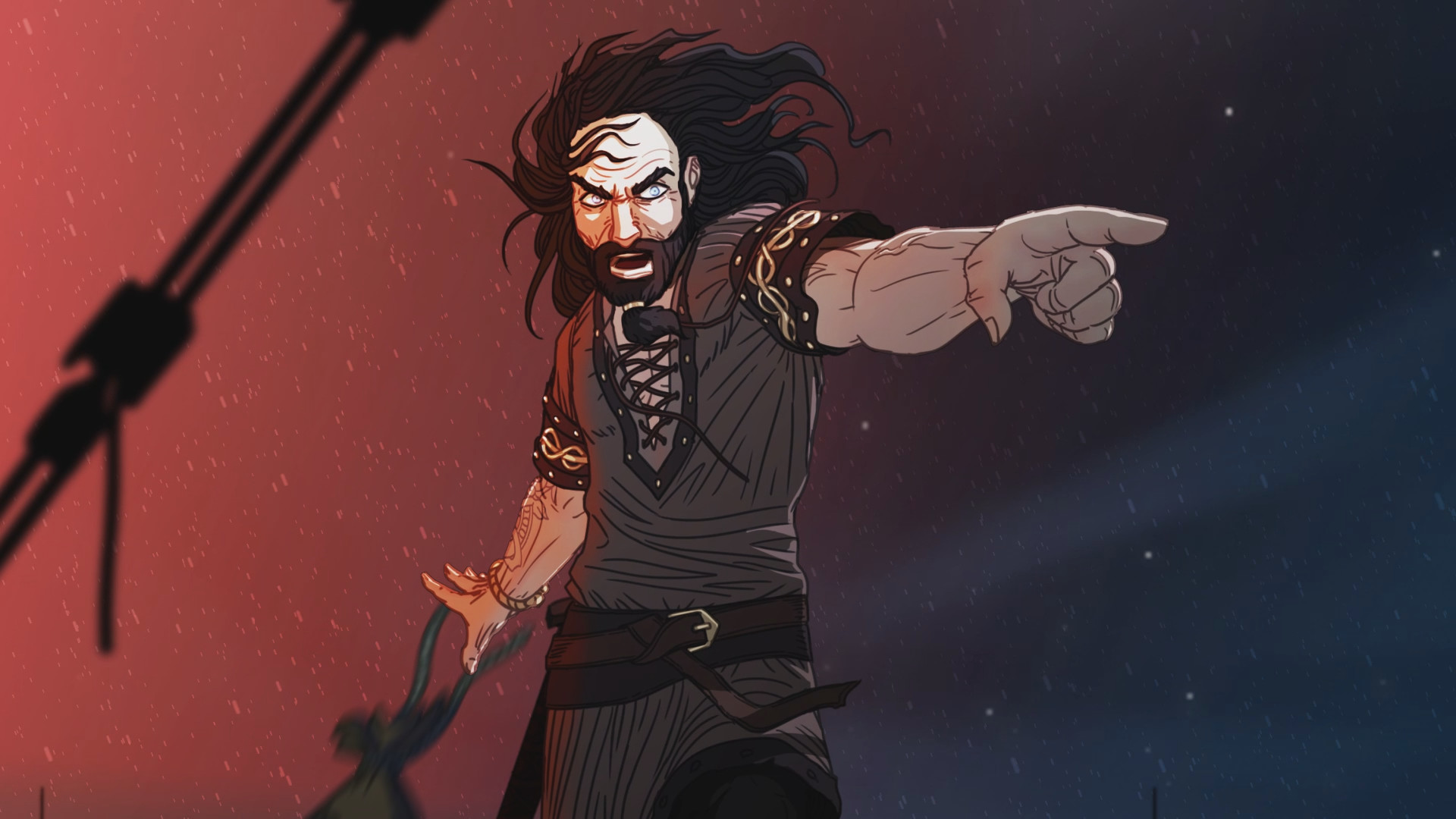 Obviously, there is also combat, which most of the times is triggered after exploring during the day. Combat is turn-based, with characters from both parties acting in a specific order based on their initiative. During combat, there’s also the chance of someone receiving injury points or getting a wound, depending on how much damage they receive. The battle board is divided into two sections, melee and ranged, and, depending on where each character is, that may allow them to use specific abilities. Nonetheless, in order to have someone in a ranged mode, there needs to be someone on the frontline. Besides that, it’s pretty much what you’d expect from a turn-based combat system, with each character having different abilities that they can use by spending action points, as well as a series of debuffs and buffs that can be applied to both sides. In spite of all that, combat is really the least interesting part of the game, and while it was fun at first, it quickly became a chore and I’d close my eyes whenever I saw that exploring the island resulted in yet another encounter.

Where the game succeeds is where its resource management directly affects each character individually and vice-versa. It’s quite amusing at times, as the game tends to present you with these really funny situations that can prove both beneficial and detrimental to your party, but I have to admit that the writing is really odd at times, mostly because certain parts of the dialogue don’t fit the setting nor the time in which the game takes place. There are also plenty of jokes that don’t really make sense, or don’t really fit in given the context in which they’re said, but if you can ignore that you can have a reasonably good time.

If you were hoping for an interesting combat system here, I’d go ahead and dare to say that you’re probably better off looking somewhere else, and the same goes for a deep and intricate story and plot. Dead In Vinland might not get those things right, but it certainly goes out of its way to create this really interesting gameplay loop that ties rather nicely with its narrative. There’s really no downtime because you pretty much always have something to worry about, and thus you have to find out the best way to deal with that problem. While you might be in desperate need of wood, that can also make it so that whoever goes and gathers it comes back depressed, so then you have to fight that depression with booze, which requires farming wheat for producing beer for example. The game has a whole bunch of these loops that fit quite nicely, as you’ll always find yourself worrying about what is your next best move, and that, to me, is the best part about this game, I just find it a shame that it doesn’t succeed that well in other areas.