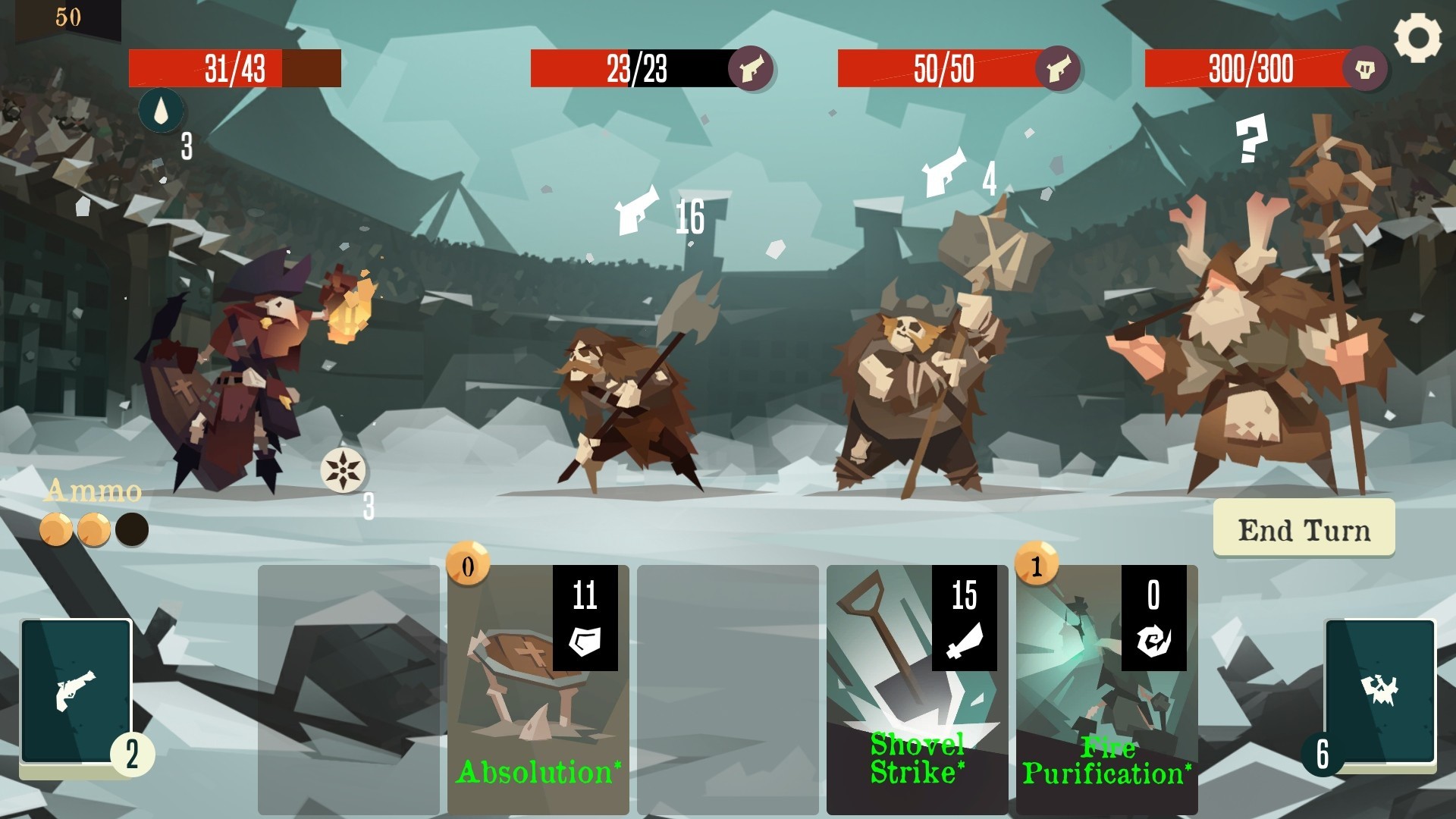 Pirates Outlaws was published by Fabled Game and came out on August 28, 2019. It’s another roguelite CCG/card-battler similar to games like Slay the Spire, Iris the Giant, Neoverse, etc. Though this one stands out from the rest in a couple of key areas.

The game starts off like a lot of other roguelites, teaching you the basic mechanics and how the game works. This tutorial section ultimately leads to a battle on Monkey Island (which was a pretty cool reference).

Graphics wise, this one looks great. It utilises quite a unique and different artstyle but I still think it looks really good for a card game. The character models, although in 2D, look pretty distinct and help give more life and personality to the game. The card designs are also creative and based off real weapons/attacks all connected to the pirate theme. 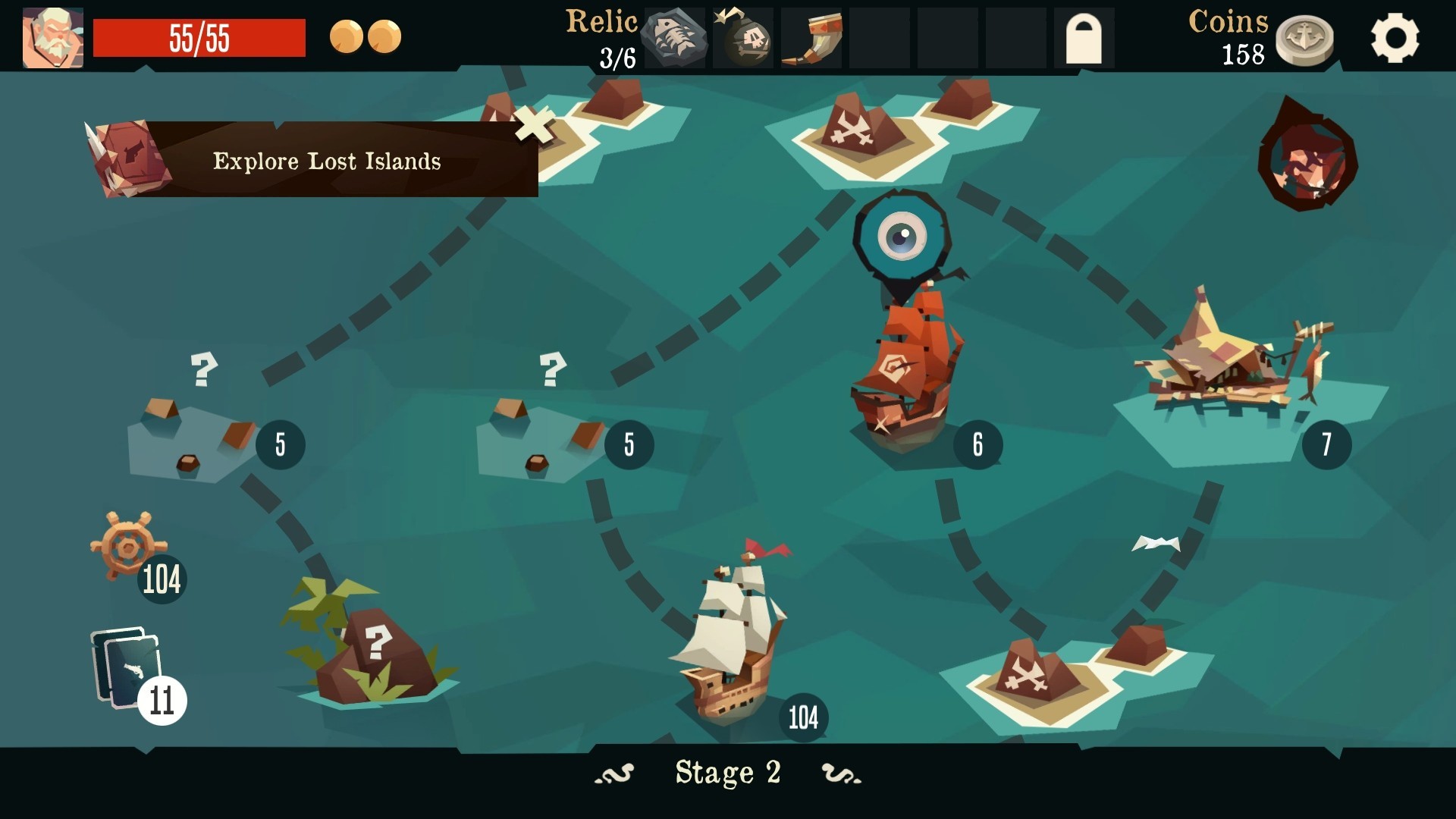 Regarding gameplay, I have some interesting thoughts on this one. Generally it’s a more fast-paced version of the CCG and roguelite mix. The game works like this, in each turn you have limited ammo and a hand of cards. Ranged attacks for the 1st character (specifying this because all characters are different) use up ammo, while melee attacks don’t. Whenever there’s a new turn the 1st default character reloads one ammo automatically (again this doesn’t happen for every character) and can use the ammo cards in his hand to gain more, specifically up to three. You also have your defense cards which build up armor. A normal encounter ends pretty quickly, as enemies have very little HP and each turn of you and your enemies attacking takes at most a few seconds. This is mostly due to how fast the attacking animations are. Pirates Outlaws’ quick and fun mechanics are what draws me to it the most, mainly because you can enjoy a round of this game whether you have the time or not. Whenever you’re done with an encounter you can move on to another through the game’s map, but you only get a limited amount of action points and travelling to different places spends different amounts of these points, but they’re still plenty to get you through the game.

The maps feature normal battle encounters, events which are basically random occurrences, markets that sell you upgrades and taverns where you can regain the HP you lost in battle. There’s also maelstroms, which are shortcuts to other parts on said map. At the end of each map section, you’ll fight a boss which,when defeated will prompt you to either continue on through your journey or take your winnings (gold which is the game’s currency) and leave. Whenever you get through a run, no matter if you die or not you gain notoriety points. These can be collected to unlock different map sections, characters or even a completely new game-mode called “Arena”.

Another thing that I really like is the huge roster of characters you can unlock; there’s a lot of content here and each of them have their unique design, abilities and cards. The game also borrows the Relic system from Slay the Spire, which basically grants you a passive ability whenever you get a new relic (multiple can be collected in one run). When a character dies and the run inevitably ends you unlock a few cards from the game’s huge collection of over 6000. On top of that they’re still updating the game frequently and regularly. In short, this game is lots of fun and super quick to get into. The only problem that the game has or, to be more precise the game’s monetization on the platforms it’s being ported to, is that Pirates Outlaws is also a mobile game. This wouldn’t be an issue at all normally, but there’s quite a discrepancy with the game’s price on these two different platforms. In mobile devices it only costs about a dollar, meanwhile on Steam it’s priced at $15 even on sale. I’m not saying it’s not worth it to buy the game at $15, but getting essentially the same game on a different platform for way cheaper should definitely be mentioned. Although this didn’t affect my score on the game, as it’s not inherently a problem with it, it’s still a very important fact to be noted. Other than that, I’m of the opinion that this game has become my favorite roguelite/CCG mix even topping Slay the Spire because of it’s overall fun factor. 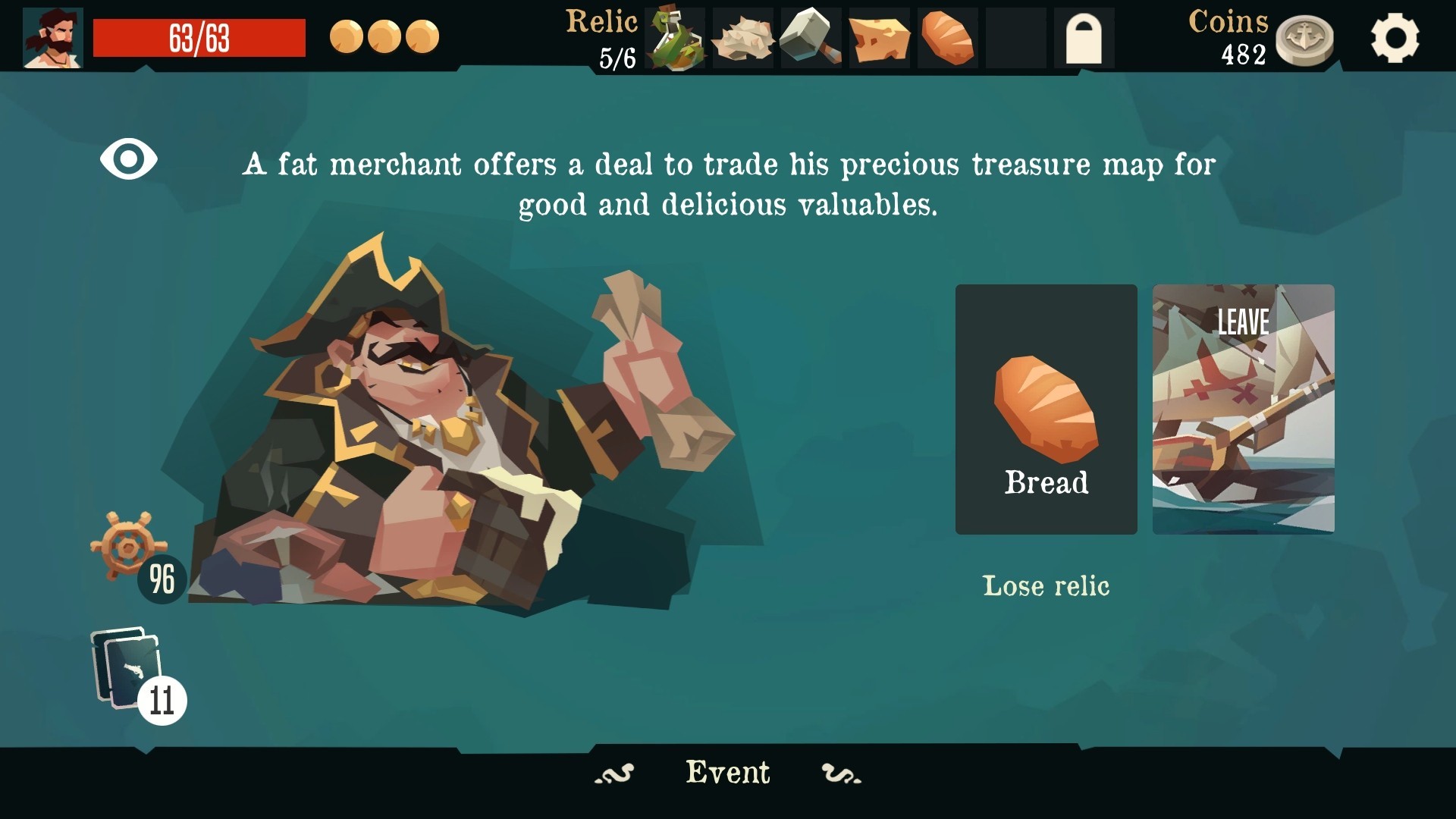 I don’t really have much to say for the sound design, the sound effects are pretty well-made and the music doesn’t sound half bad, especially considering what type of game this is.

The accessibility on the other hand is definitely a strong point. The controls are simple, they’re made to be touch-based, but also work great using only the mouse and the overall difficulty for a roguelite is definitely on the lower end of the spectrum. So, this one can be played by pretty much everyone.

As for the replayability, as I stated previously this is a roguelite which means the map structure, encounters, enemies and even loot are completely randomly generated. Meaning that you can get a lot of playtime out of Pirates Outlaws.

In conclusion, Pirates Outlaws has become my new favorite from the genre mix of CCG and roguelite because of it’s fast pace and entertaining gameplay.

Pirates Outlaws has become my new favorite from the genre mix of CCG and roguelite because of it’s fast pace and entertaining gameplay.