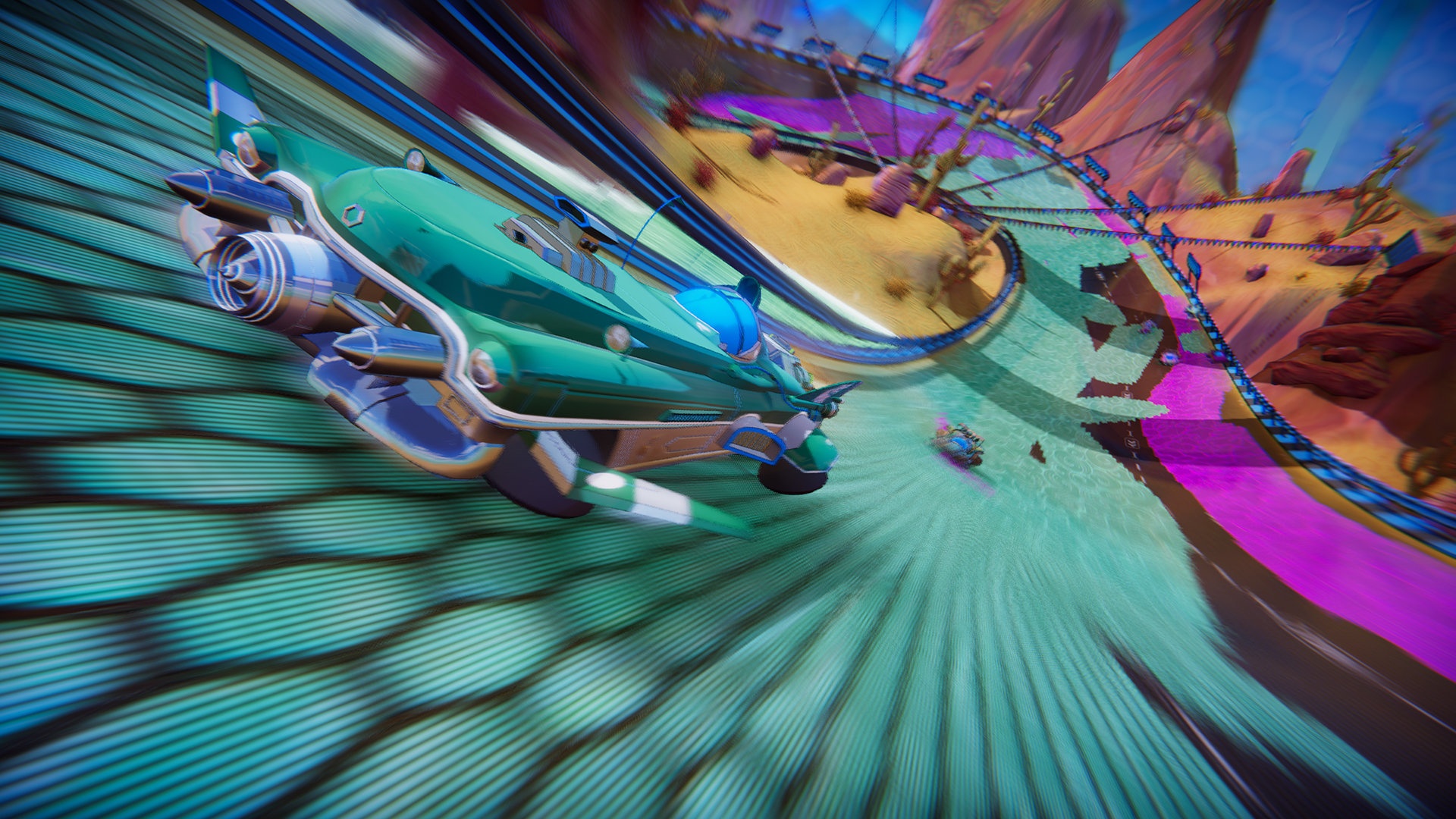 Over the years, I have played hundreds if not thousands of video games, from a wide variety of types and genres. However, out of all of them, the sub-genre of arcade racers is the one which resonates with me the most. And I’m not going to lie, but whenever I hear about a brand new and upcoming arcade racer, I get incredibly excited – especially in this day and age where such titles are a rarity. And when I have found out about Trailblazers – post release – I could not wait to try it.

Trailblazers is a product of Supergonk, a relatively new studio, with just one product to its name. And as you might have already guessed, a supposedly one-of-a-kind arcade racer, Trailblazers, is the studio’s first complete release. And Rising Star Games, the publisher of the title, is adamant that Trailblazers is a breath of fresh air to the stagnating, if not borderline dead, sub-genre of arcade racers.

On core mechanical level, Trailblazers is not exactly reinventing the wheel. It is a six man racer, where you blaze across a plethora of tracks while controlling zany, Wipeout’esque floating vehicles. However, unlike your Blurs of Split/Seconds, Trailblazers is a team based racer, where you compete against AI, or other players in 3v3 or 2v2v2 races. And you could argue that such approach to arcade racing is not exactly the second coming of Jesus Christ as Sony’s own Drive Club was centered around team based racing. But team based competition, is not the only thing which Trailblazers has to offer. 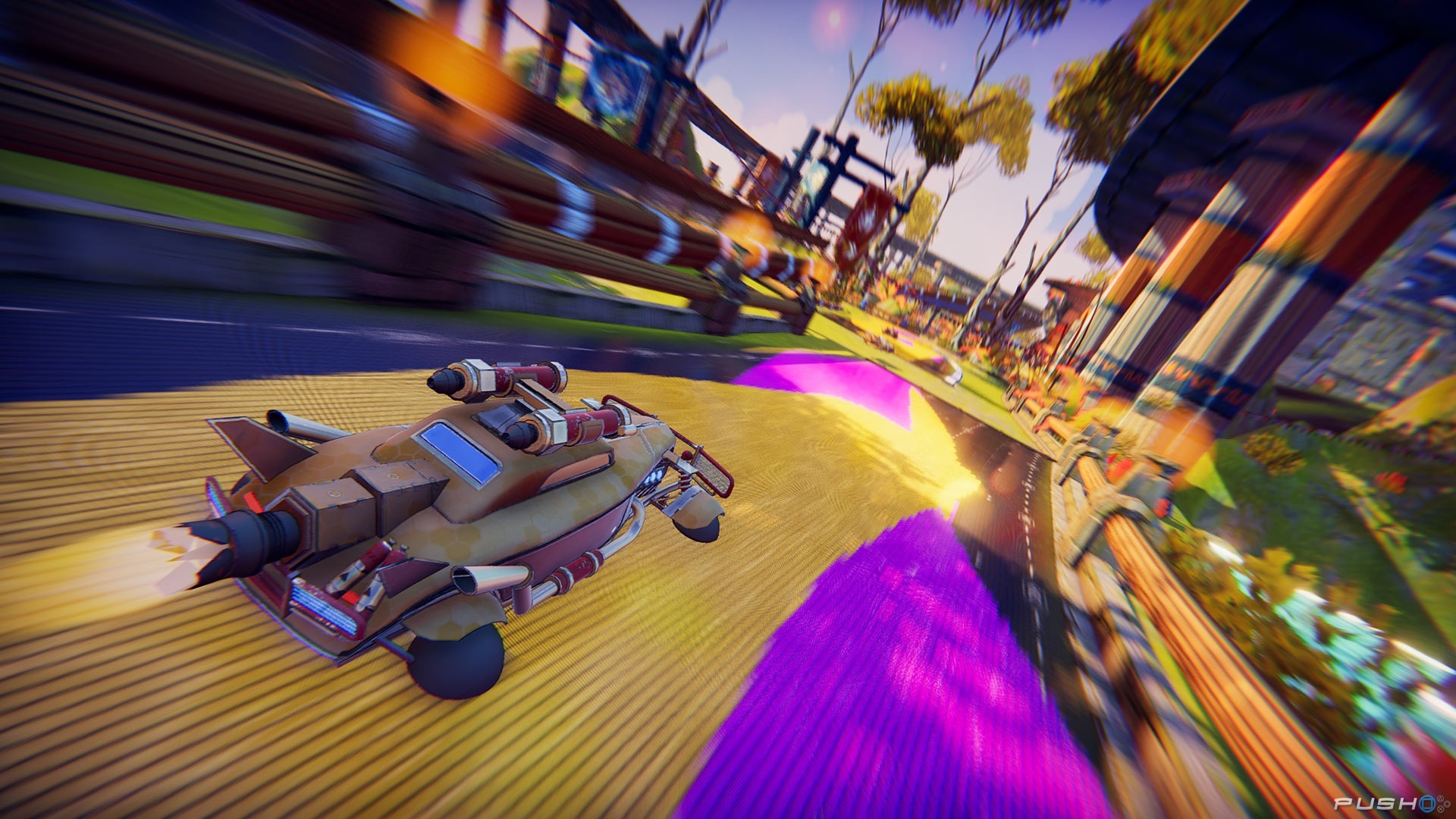 Outside of its core racing mechanics, Trailblazers also features a Splatoon-like painting system, where you can leave a trail of paint for your teammate to use, and vice versa. And when traveling on adequately painted surface you gather boost, which can be multiplied up to four times. And in truth, the title’s team-play is more about the usage of the aforementioned paint, rather than sheer skill, as ultimately you won’t get far without boosting. And while some could complain that sole reliance on the track-painting mechanic completely removes the skill from the title, then it has to be said that doing so is ultimately for the better, as Trailblazers core racing mechanics, and game-feel are not particularly good, or enjoyable.

Within seconds of starting Trailblazers you’ll notice that there is something odd about how each of the in-game vehicles controls. And at the beginning it is hard to grasp what is exactly wrong with them, but as you pres through the title’s rather uninspired and unceremonious campaign, you’ll realize that Trailblazers’ core controls are incredibly loose, and inaccurate. And in the long run, they’re ultimately immensely frustrating, and remove any semblance of fun and/or entertainment from the title at hand.

As you press through Trailblazers’ campaign, the game in question does not grow on you one bit. Instead, you grow to dislike it, and with even more time hate it. As at the end of the day, Trailblazers, is an arcade racer which should have been in development for may more months, as its core controls are simply inadequate – and that is putting it nicely, as some, most even, would call the title’s game feel downright bad, if not catastrophic.

Trailblazers is clearly a product of some intense labour, and game design. But with each and every passing minute it becomes more and apparent that the developer behind the title has spent more time worrying about making Trailblazers unique, instead of making it, you know, ”good”. And this particular title clearly suffers from the Lawbreakers syndrome, where the developer wanted to avoid being compared to other games so much – especially Wipeout – that in the end, it has completely forgotten about to actually make the title work as a complete product, rather than a collection of shallow ideas. 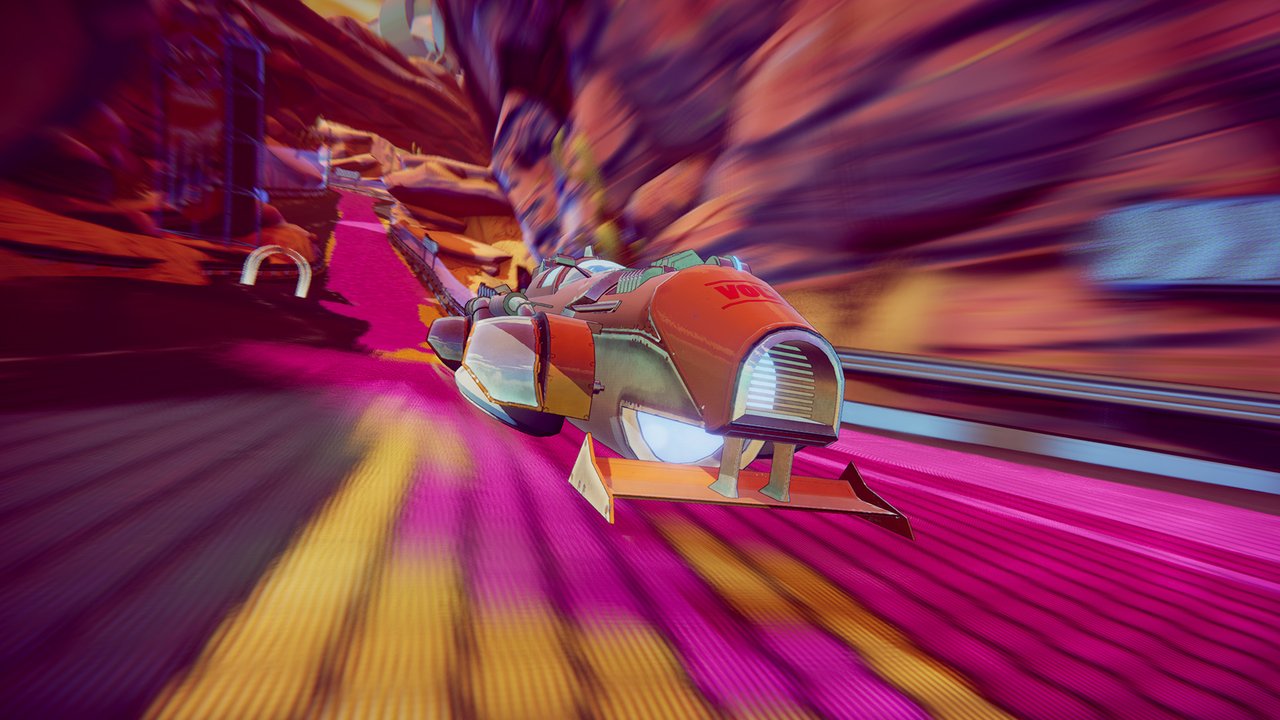 Supergonk is clearly proud of what it has achieved with its ‘revolutionary’ and ‘innovative’ team-based, paint-driven racing, as the entirety of the title’s story mode is trying to push the title’s core selling points at each and every turn. And unfortunately, the core narrative, just like the title’s game feel and controls, suffers greatly due to developers fixation on being unique. And it is just as under-cooked and underdeveloped, as the title’s other features – besides the ‘ground-breaking’ track painting. And that’s incredibly disappointing, as Trailblazers is a title with a lot of hope and promise, but such are incredibly extinguished by the developer’s fetish with apparent innovation.

The best arcade racers out there, are like hardcore punk songs of the 1980’s. They’re short, concise, to the point, and most importantly, they are incredibly fun to experience. And Supergonk clearly understands that, but by trying to avoid copying the old school punk, they’ve ended up creating a shambolic rendition of TerribleTim’s Brotherman Bill, which has been seemingly performed by a crackhead using a xylophone. And as funny as it sounds, it unfortunately isn’t, because in the long run, it is downright unbearable.

If you were to read about Trailblazers prior to its release, you would walk away thinking that it may just be the next, big, arcade racer. However, if you were to purchase it on the back of the previews and promotional materials, you would end up being as incredibly disappointed with it, as I currently am. Because Trailblazers, despite of its plentiful and brash promises, it fails to deliver on either of them. And ultimately, Trailblazers serves you with a product that differs greatly to the one which you were intending on buying. And if you are looking to fix your arcade-racer itch, then you may be forced to dust off your last gen console, or wait for the release of Onrush.