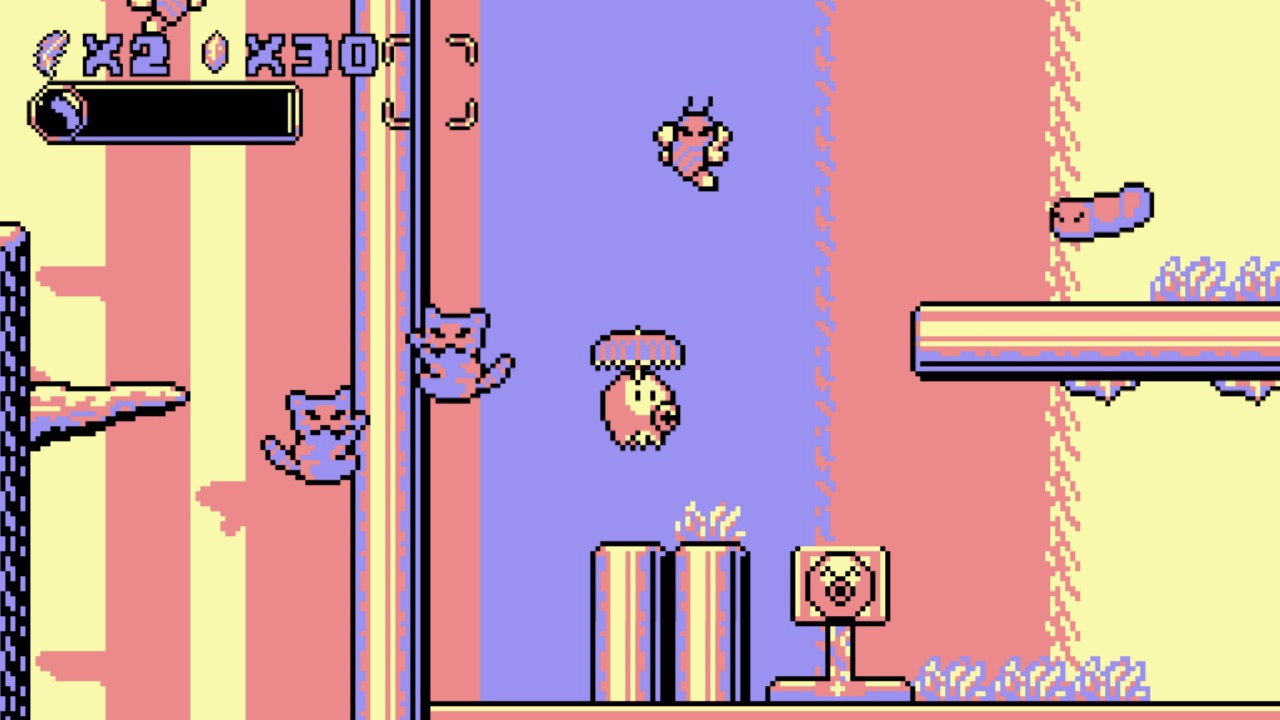 There’s just something about Nicalis that’s always sat very well and very satisfying with me. The games that they’ve published – from The Binding of Isaac to Crypt of the Necrodancer – have ended up being some of my absolute favorites. Blade Strangers, Code of Princess and Ikaruga are unbelievable, while smaller titles like Knight Terrors or Tiny Barbarian DX still kept my attention in a big way. So I trust when I see their name stamped on something, I’m going to be fairly excited. I was surprised that a clear Gameboy homage was coming out of their stables, but I still put on my helmet, got my head down and went to work. And wouldn’t you know it: Save Me, Mr. Tako! straight up blew me away.

The world of Save Me, Mr. Tako! is a strange one indeed. You play an octopus who is a loyal member of the octopus army, and it’s important to know that humans and octopi are at war. One day, whilst raiding a ship, you defect from your training and save a human princess, swimming her to a distant shore, far from your bloodthirsty brother. Everyone is confused by your actions, and the King sets you the task of proving your loyalty. You see, the octopuses have made strategic alliances with other humans to overthrow the kingdom which rules them all, but the octopods also have every intention of double-crossing them once power is seized. But our hero doesn’t want to hurt humans or enslave anyone. He wants to restore peace and harmony, he wants people to be free and happy, and he wants octopuses to be friends with humans…but maybe we can keep the tacoyaki octopus-free from now on.

Before we get into anything else, it should be said that the developer, Christope Galati (who worked within Nicalis), set out to write a love letter to the Gameboy, and holy moley did he nail it. Certain games like Downwell can capture the look of the Gameboy, but that’s really as far as that game goes in emulating the handheld godfather (it’s still a great game, though). Mr. Tako does this fantastic job of helping to use graphics, color palette, the soundscape and the controls to best make this title feel like it should have been released two decades ago, but maybe on a specialty cart. Even the loading of the game uses a chime that’s almost but not quite the Gameboy startup sound (probably to avoid legal trouble). I’m completely in love with how the worlds were designed, how the chiptune soundtrack plays out, how the multiple save slots feel like it’s straight out of Link’s Awakening…as someone who once owned close to fifty Gameboy cartridges, this is a real deal contender for a “Gameboy game.” 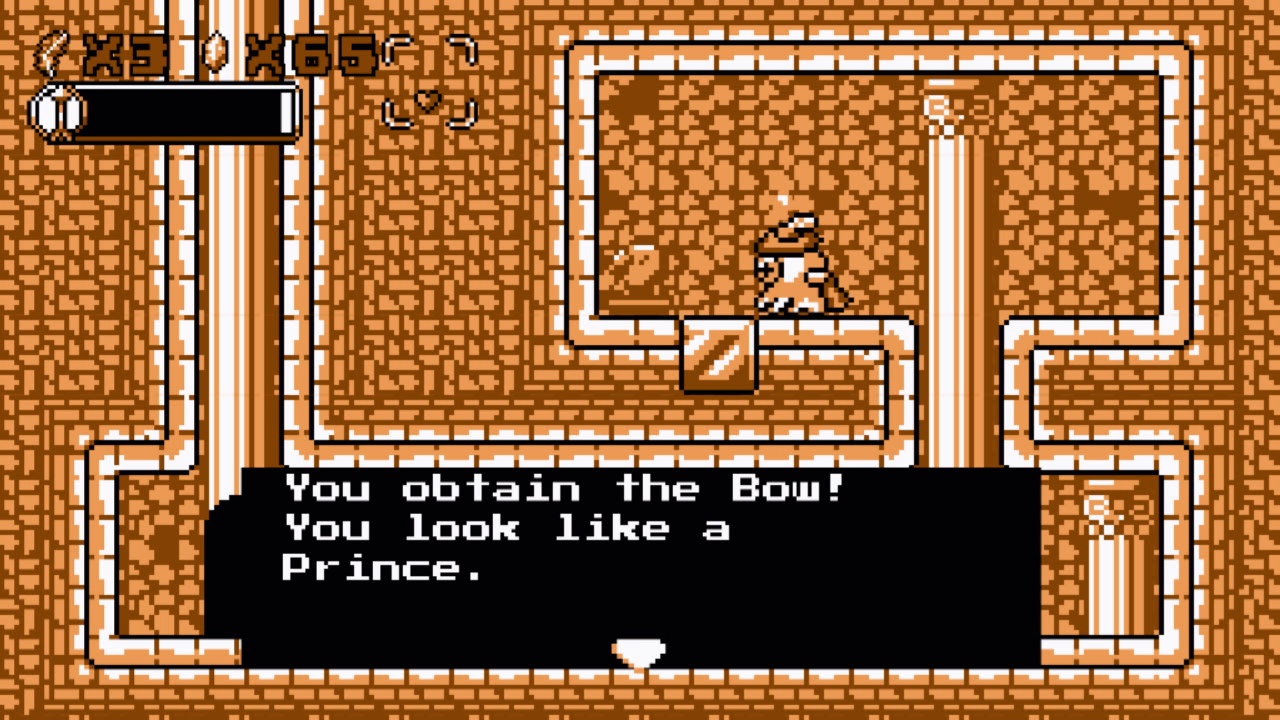 Save Me, Mr. Tako! plays out like a combination of Super Mario Land meets the original Kirby with a very strong narrative and exploration angle. Each level that you play through means going through a door, and the doors gradually appear, one at a time, as the storyline triggers new events to happen and pathways to open up. Starting out in your own oceanic backyard, you gradually unlock new worlds to visit, starting with gaining the power to breathe air and getting the hell out of the water. Pretty soon you’re bounding through forests and towns, making friends, helping children, and trying to stop wars. Each level feels a bit short, but that’s due to three distinct factors. Firstly, once you get a grip on the controls, you’re set for life. Second, more than a few levels have replay value, which we’ll address in a moment. And, most importantly, it’s because Mr. Tako remembers some important tenets of Gameboy gaming: short, sweet and devastating.

In each level, the primary objective is for Mr. Tako to get to the door at the end, and there’s plenty between you and that gate in the meantime. Tons of enemies, from crabs and fish to humans and sea lions, will move and patrol, ready to take you out in a single hit. There are no life bars in this game: an errant blow to an exposed octopus is game over. So, you gotta be smart: feathers are one-ups, and collecting enough gems (100 to be precise) is an extra life. You’ll have moments where it’ll feel silly how many extra lives you have, and then it’ll just take a small patch of hard-to-reach platforms or overlong gaps or a goddamn boss fight against a bird and those extra lives start dropping like mad. Now, you do have some offensive capabilities, but a raw octopus only can do so much. You can jump, and you can scramble onto ledges by the tips of your tentacles (a jump positioning mechanic that I loved). You can also shoot ink, which will stun most enemies and make them safe to jump on. This becomes a great platforming situation, but be warned that the ink will wear off eventually, and you don’t want to be standing on a squid when it comes back online and is mad at you. 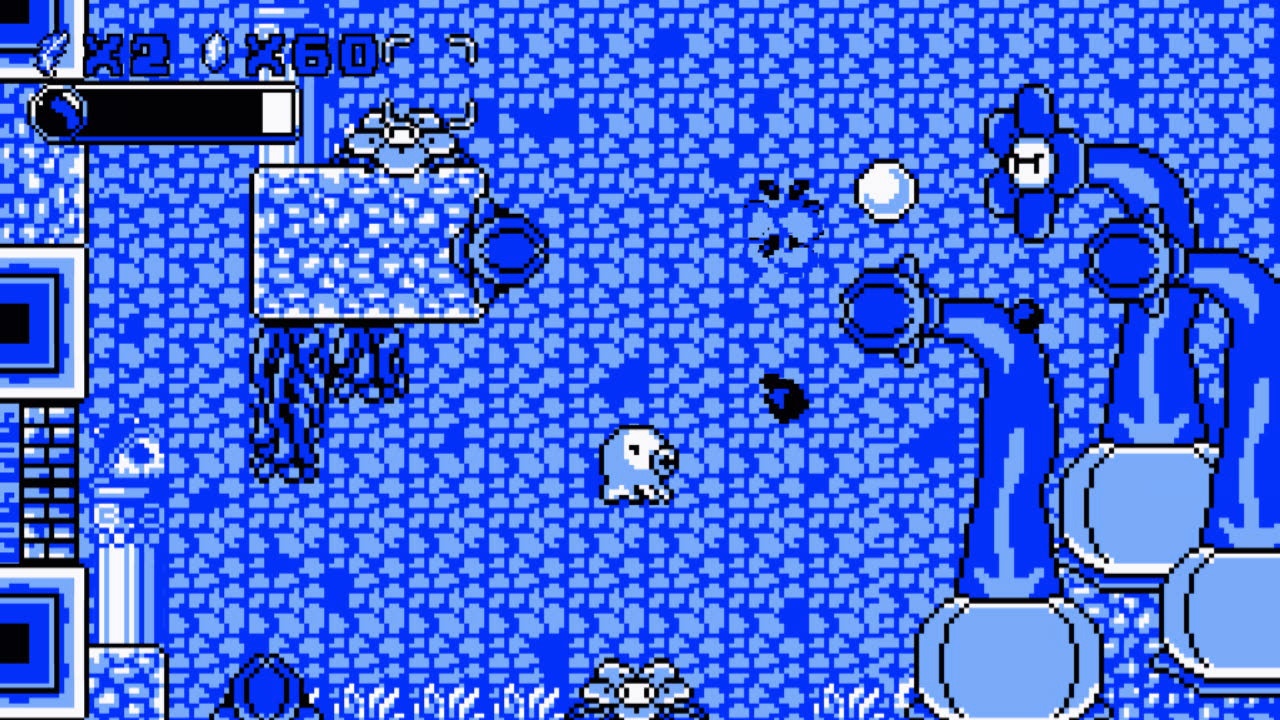 Mr. Tako also boasts a bit of wearable flair to keep alive, and this comes in the form of hats, which I positively adore. Every hat you find has the benefit of giving you one extra hit before becoming seafood, but it’s more than that (well, except your very first hat, which that’s all it does). The hats also alter the way you attack, changing your ink shots into arrows, bouncing balls and boomerangs, to name a few. Most of the time, your projectiles, no matter what they look like, will still do the same thing: freeze enemies. However, they’ll also give you a leg up in the way that they can interact with puzzle triggers and hitting enemies with odd attack patterns. The balls, for example, are great for hurling off ledges and hoping they hit the pelicans waiting below before you get there. But if you get bumped while wearing the hat, you’ll live, but lose the hat’s power. You might be able to get it back from a checkpoint (if the level has one), but you’ll probably have to head back to the Hat Dealer’s house (his name is Bako and he’s inexplicably moved in with you). With fifty different hats to find (and some are not part of the main quest at all!) there’s tons of variety in how this octopus can greet the day.

But the most interesting part about Save Me, Mr. Tako! is how the story really does develop the rest of the game. Taking the time to talk to the different people and cephalopods that you run into will sometimes open up branches and side quests that can lead to great things. You see a hat early that you can’t access till you rescue someone. An octopus at the very beginning of the game hints about something hidden in the coral that you won’t be able to get at till MUCH later on. There are even mini games, the hallmark of a silly Gameboy title, that occupy your time and make you want to get high scores even though there isn’t an initially apparent positive affect it has on your story. For me, it was the only way that I could finally put to bed all those concerns I had over seeing Japanese tacoyaki stands with a mascot of an octopus as the cook. Now knowing that octopus-less tacoyaki was possible made all the more sense and less nightmares.

This is one of those games that’s really good if you have no ties to the source material and is positively wonderful if you do. Save Me, Mr. Tako! has everything that I loved about the games that I played in the back of a Honda Civic as my mom drove me to soccer practice. It’s got the banging music, it’s got tough but fair platforming, it autosaves and prevents me from screwing everything up, and it can either be a straightforward play or it can drag out extra hours of exploration and enjoyment. Best of all, the Switch is backlit, SOMETHING I ALWAYS WANTED FOR A GAMEBOY. If you’ve got any room on your Switch for some modern retro, have I got the octopus for you.

This seriously feels like a game that was a bestseller in Japan for the Gameboy that just got ported to the Switch and no one knew about.