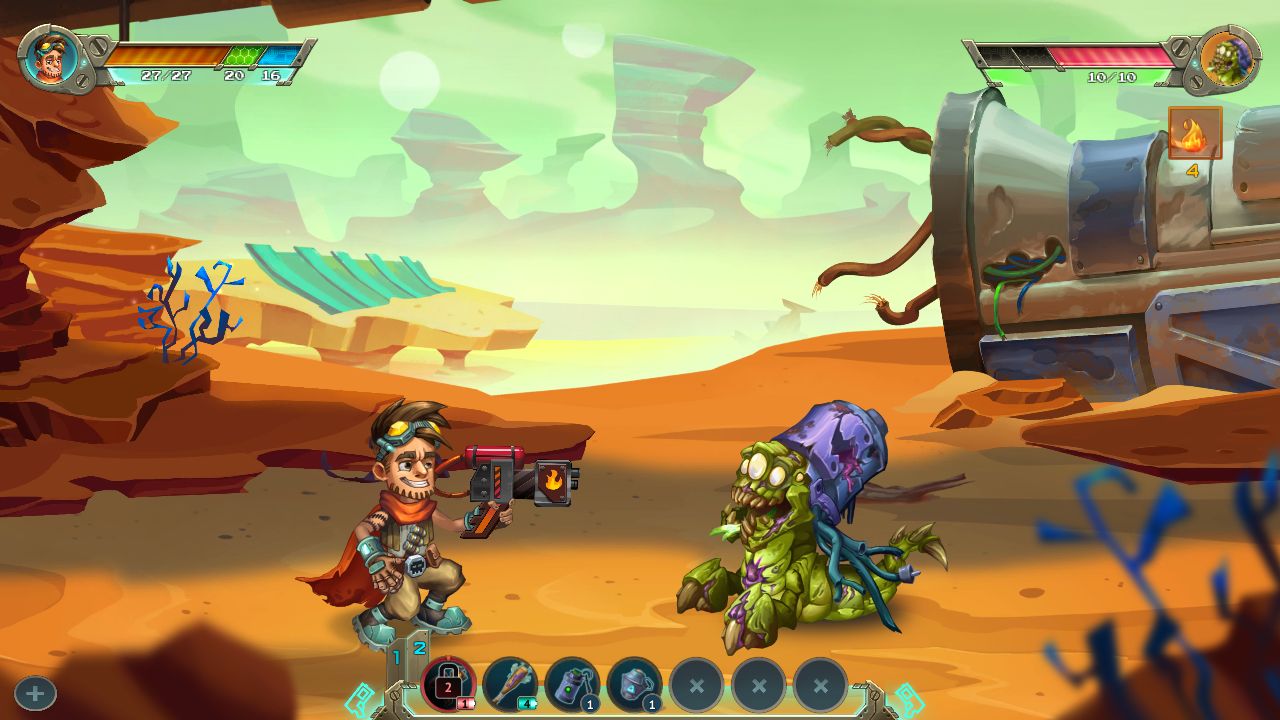 There aren’t nearly enough gamebook adventures on the Switch. In total, there’s one, and it’s one of the best of all time, and a damn fine game port as well. But a lot of people grew up getting to know gamebook style stories, be they the choose your own adventure type or “I hope you have dice and a pencil handy” Fighting Fantasy style. In any case, gamebooks are the perfect bridge between interactive fiction and literary adventures, and often help lead early players to things like tabletop gaming or even RPGs in general. So when I see that Forever Entertainment has brought EvilCoGames’ short-but-sweet expedition to the Nintendo storefront, I got a little excited. And, thankfully, it’s a pretty good port.

Star Story: The Horizon Escape is the tale of Van Klik, the space archeologist/opportunist, who goes off in search of great and potentially valuable artifacts and ends up getting dragged into a massive tale of legends, deception and shaky alliances. After his spaceship unceremoniously crashes on an unknown planet, it only takes Van a moment to run into hostile natives and some semi-hostile strangers. Assisted by a well-meaning but possibly jealous hologram AI, Van has quite a journey ahead of him, and a surprising 24 different endings as to what may happen.

Star Story is a great example of blending genres, as the developer clearly has love for both text-based adventures, point and click and, strangely, turn based combat. Van will walk around a number of worlds and terrains, picking up various items and making decisions that will potentially influence one of three stats: strength, intellect and charisma. The more decisions you make affecting a singular stat, the stronger that stat becomes and, potentially, allows you to make better decisions to avoid or change encounters. For example, you run into a gang of space scavengers relatively early on and have the choice to engage or try to outwit them. The first intelligence check is fairly low, and you can simply make the leader laugh before he walks away. However, to basically “intimidate the gang” to avoid any henchmen fight, you need significantly higher intelligence, and failing the check means fighting a whole bunch when maybe you didn’t need to. 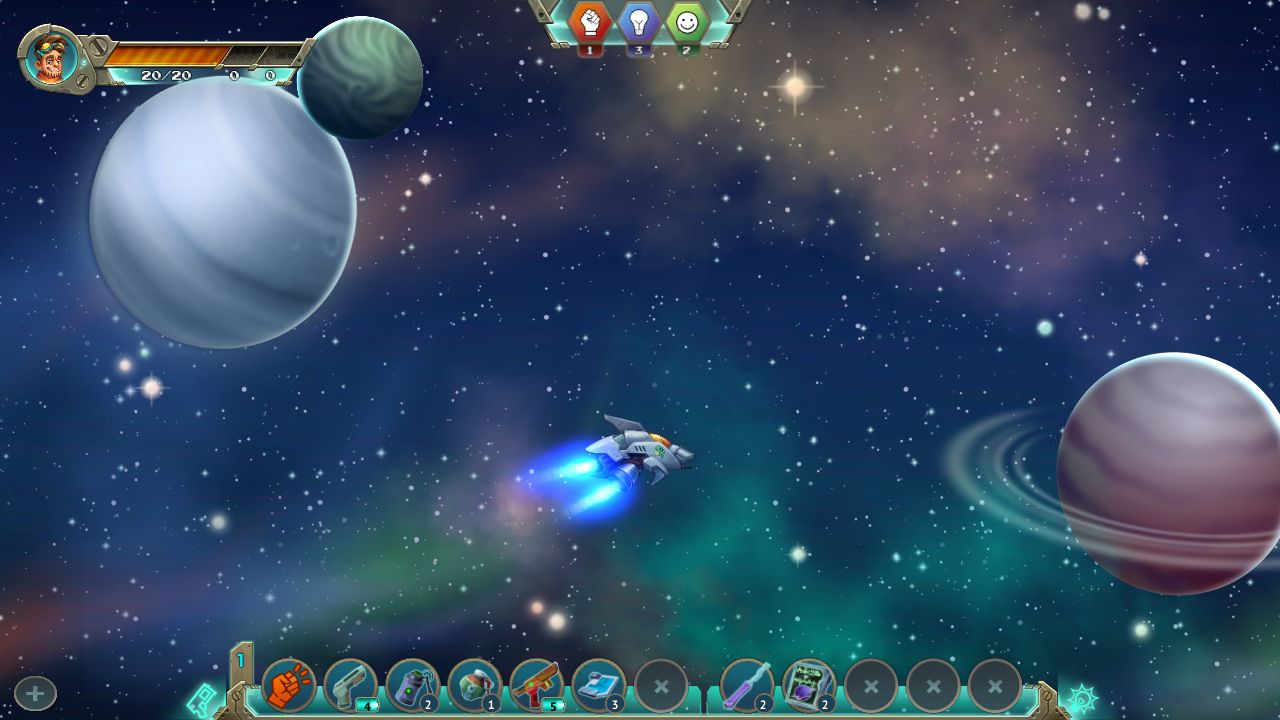 The combat aspect certainly sets Star Story apart from most other games in this vein. Reminding me a lot of Galaxy of Pen and Paper, there’s a certain wink and a nod with each turn-based encounter that Van runs into. Each opponent (which often looks like a space shrimp) will present different approaches in how to deal with the hostilities. The most sure-fire way to die is to simply keep hitting it and hope things will work out for the best. Alright, that’s not exactly true: if you dump all your stats into strength, raging on things will often work out just fine. But to maintain a good amount of leftover HP and to make the battles go faster, you gotta carefully choose what items you want to use and in what order. Stun grenades, corrosion blasters, hack viruses and more will give you variety in how to approach the battle. In all cases, making sure you can hamstring your opponent (either by destroying their defense or stunning them and earning extra turns) is key to getting out mostly unscathed. Of course, the combat is a background note to the story itself.

Star Story: The Horizon Escape is pretty damn engaging, but it feels like some of the game’s length is slightly manufactured. In fact, it becomes apparent the perceived “point and click” interface is little more than an atmospheric framing device that adds some valuable screen time to the environment. There’s not really much you ever need to “click” on other than for some very brief exposition and analysis of things in the background. You don’t control the walking of Van whatsoever: he plods along in a straight line, going after the intended target that was decided upon in the most recent dialogue branch. The developers originally wanted to boast the 24 endings as ways to convince players for greater replay value, and I think that’s a very brash and hasty intention. After all, when you think about a game like, say, Shin Megami Tensei, do you consider the game to be 40 hours long, or 160 hours long because of all the endings? The former, really, and that makes Star Story feel quite a bit shorter when it dawns on you that people are banking on replay to see all the branches and choices for the endings.

And don’t get me wrong, if the game hooks you, it’s easy to want to go back and redo it. The porting from PC to Switch has gone incredibly smoothly, and the footprint for this game is a good size (approximately 2.2 GB) with some solid performance and configuration. Forever Entertainment went with a combination of buttons and touch screen, and that feels right for whatever style you play. Using the Joystick for actions and the directional buttons for inventory works wonderfully, and you can toggle between docked or handheld play with relative ease. I do feel the point and click aspect works best with the touch screen, but I also don’t know if that’s enough of a selling point to convince players to always stick with the undocked option. Time will tell, I suppose. 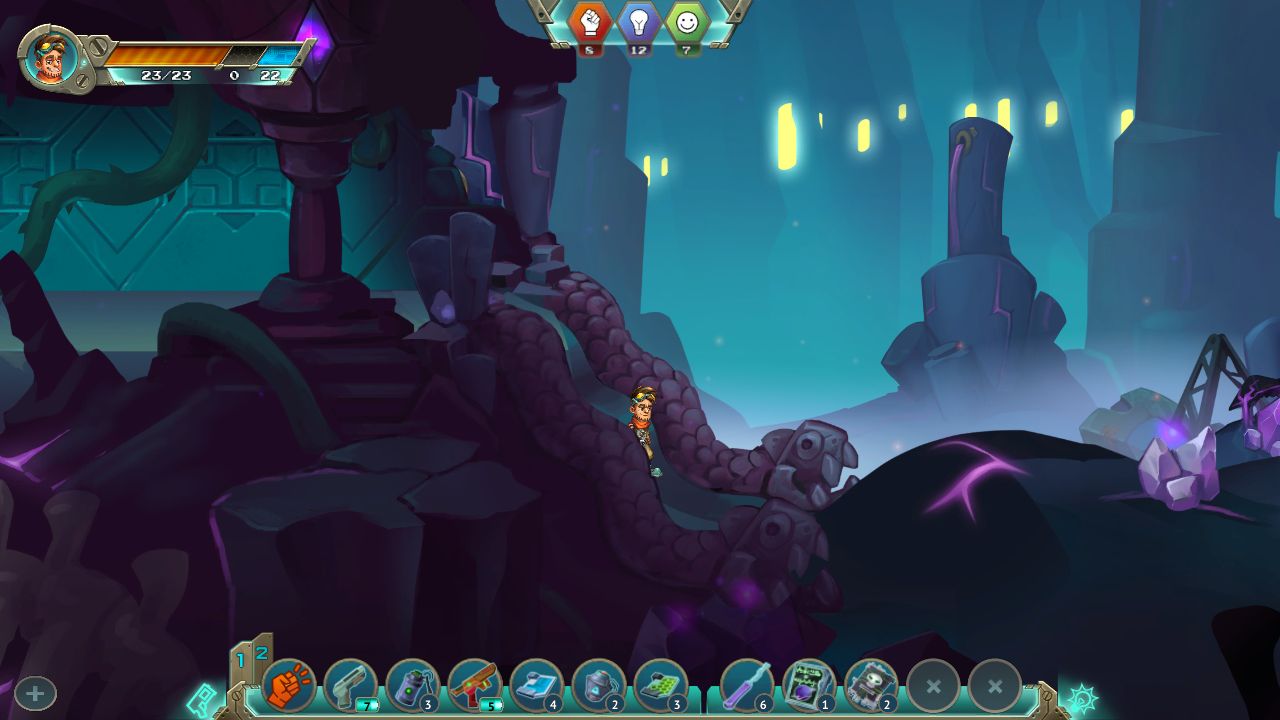 But the lifeblood of Star Story: The Horizon Escape are the characters and the choices, and that does stand strongly on it’s own two feet. Van is an affable, likeable hero without being too smarmy, swarthy or abjectly stupid. Everyone that you encounter, from the standoffish Sid to the wildly swinging Blake has their place in the world and fit in well. Everything is cohesive and feels like they were constructed together to weave a giant tapestry of mild insanity and excellent engagement. Your choices are limited for many instances (this isn’t Grand Theft Auto), but the game does a great job of offering at least one branch that makes you pause and say “Well..what would happen?” And this actually caters even better in combat, where bizarre choices of items could lead to great outcomes. I mean, using a hack virus on a totally organic being wouldn’t have any effect, would it? You definitely need to try it and find out.

In the end, Star Story does a lot to make sure that this scrappy little package of a game has plenty of choices and outcomes, hoping to cater to every kind of player, from the would-be hero to the self-centered villain and even the deranged anarchist in all of us. The only problem arises from not getting to go down the path that you want and being unable to easily back up and try again: once you start a new game, the old game is erased, and you’re back to square one. Still, for the price, you get a pleasantly surprising amount of content, and players looking to do more reading that running will have a fine time hiding from the heat with this title.