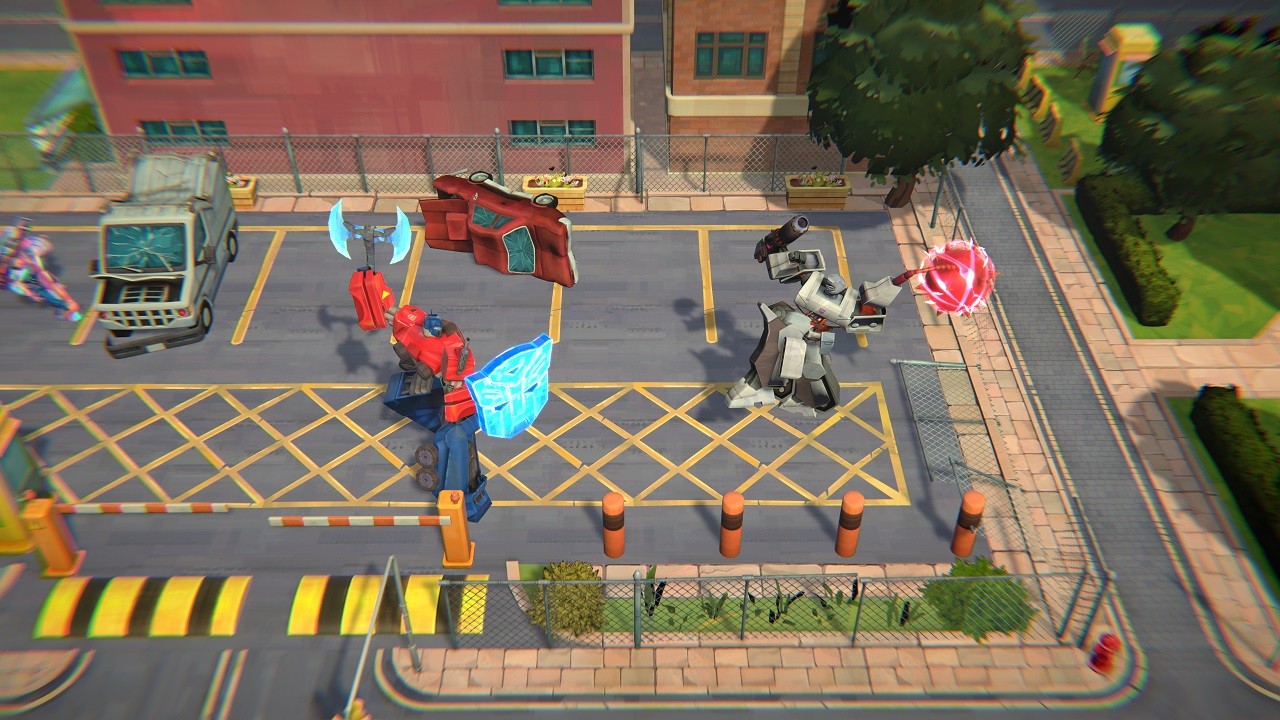 Transformers has been a perennial line of animation and toys for as long as I can remember. I literally recall moments from the original series that I watched when I was like 3 or 4 years old, and I still own the first season on DVD, having begged for it for Christmas the year it came out. From Beast Wars to Armada, the original amazing movie to whatever the hell Michael Bay did (still fun), I’ve kept up with the show in some capacity. The games…not so much. It’s just that it felt like the games weren’t targeted towards me, and I respected that. There was something about the newest instalment, however, that seemed to smack of a more mature vibe. Like maybe there was something to the entire idea of bringing the franchise into a bold new area. After all, Mario vs. Rabbits is one of those insane mashups that didn’t seem like it should work, yet it was one of the best turn-based SRPGs that I played in several years, so I took a gamble with Transformers: Battlegrounds.

The game, straight out, does not start good. When you dive into the main story mode of Transformers: Battlegrounds, you have a sort of cartoonish setup with both plot explanation and a tutorial mixed into one. The Decepticons have invaded Earth, so take this as a fresh reboot of the entire central concept of the game. You are immediately saved by some kind of talking drone that’s very annoying, and greeted by Bumblebee, who, if they didn’t get Dan Gilvezan to voice, they at least got someone VERY close (it looks like it might be Jeremy Levy, so kudos to him for doing a good voice). Anyways, now that this talking drone is carrying you around, the Autobots decide to defer to you, child of indeterminate age who definitely has no military experience, to order around massive robots in combat. After a quick rundown of the how and why of your movement and attacking, you learn that Megatron is helming the invasion (because of course) to capture the AllSpark, and we’ve all been here before. I wasn’t expecting them to reinvent the wheel, so the plotline gets a pass, especially because it at least makes sense in the next few segments. You spend a handful of missions getting to other Autobots and rescuing them before really mounting the offensive against the Decepticons.

Gameplay is very straightforward, particularly if you’re familiar with turn-based strategy games. You can move a party of robots around the battlefield, getting a certain number of action points for each Autobot per turn. You can use up an additional action point to move even further, with the disadvantage that it might hamstring the type of attack you have available when you’re within striking range. You can only attack once per turn regardless of action points, so keep that in mind. Most Autobots will have a couple of attacks with different levels of power, and each level deals more damage or afflicts status changes (knockback, paralysis, etc.) depending on their cost. When all Autobots have moved and attacked, it’s the Deceptions’ turn. Continue to bounce back and forth until the mission objectives (usually to defeat the opposing side) are met or until you are defeated, at which point you’ll get a chance to start the mission over. 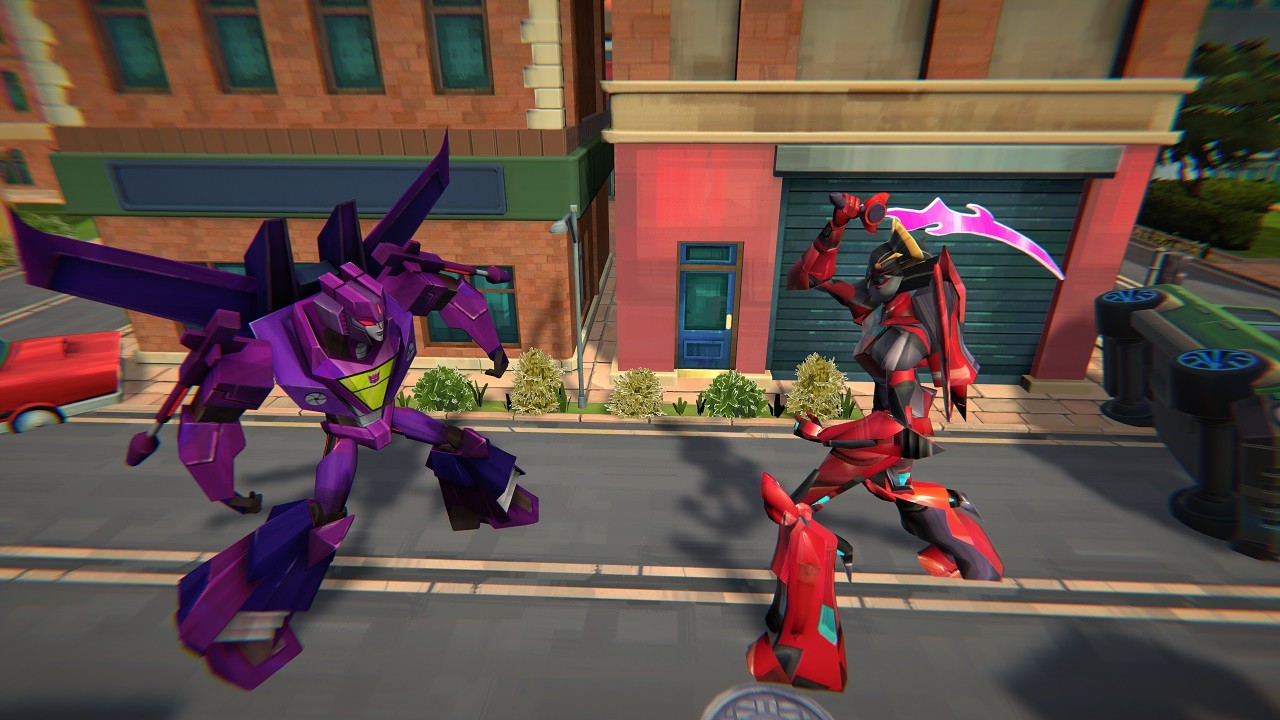 The good news is that, if you end up liking this dressed-down version of the strategy turn-based game style, then Transformers: Battlegrounds has it in spades. The number of story-based missions are quite a few, with the added benefit that completing them then unlock additional characters to use in the Freeplay mode. Freeplay incorporates a good number of game styles, from Capture the Flag to Destruction (a battle royale, if you will) and the ability to have two players go head-to-head against one another. A single console is all you need, so no worries about multiple games and multiple Switches. Players will get a kick out of the moments of tighter fighting, when the camera will suddenly zoom in and crop a single shot between the two robots like a dramatic moment in the show. Granted, these moments show off that the game is lacking the full detail of the animation, but I digress.

Additionally, as an entry-level turn-based strategy combat game, Transformers: Battlegrounds is arguably decent. Anyone coming from things like Final Fantasy Tactics or Disgaea is naturally going to be disappointed (as there’s no real RPG elements to the game) and even Mutant Year Zero is significantly more complicated, but this feels like a good introduction to the concept. The health meters are clear and easy to see, and the correlation between how much damage can be done, what you need to do to achieve your goals and how to read the map outlines are exceptionally clear. Some attacks rely on conditionals that need to be met, like distance, terrain and even line of sight ideas. The jet-based Transformers can move through low cover differently than, say, a hulking mess like Grimlock, who, in turn, can occasionally scale buildings to get the high ground and do different attacks. While this isn’t something that’s going to utterly consume you in terms of figuring out the correct strategy, I think that it’s great for players who are unfamiliar with the genre and want to get in on the ground level.

The story is trite and boring, but it’s pretty much on par with what you’d expect if you took all the key ideas from a Transformers comic book or cartoon and threw them in the blender before dumping them out into a game. I mean, you’re the good guy, you need to defeat the bad guy, and you can be the bad guy when you play against your friends, like when you were kids and you were slamming together action figures that are worth hundreds of dollars now (thanks for throwing them out, Mom). There are some quippy one-liners and throwaway comments from some of the Transformers that brought a smile to my face, but nothing really blew me away in terms of writing. Oh, except for the one achievement from successfully shoving one Decepticon into another. Two Cons, One Stone? Seriously, Coatsink Software? I mean, it flies under the radar because what kid is going to get the reference, but that was kind of out of right field. 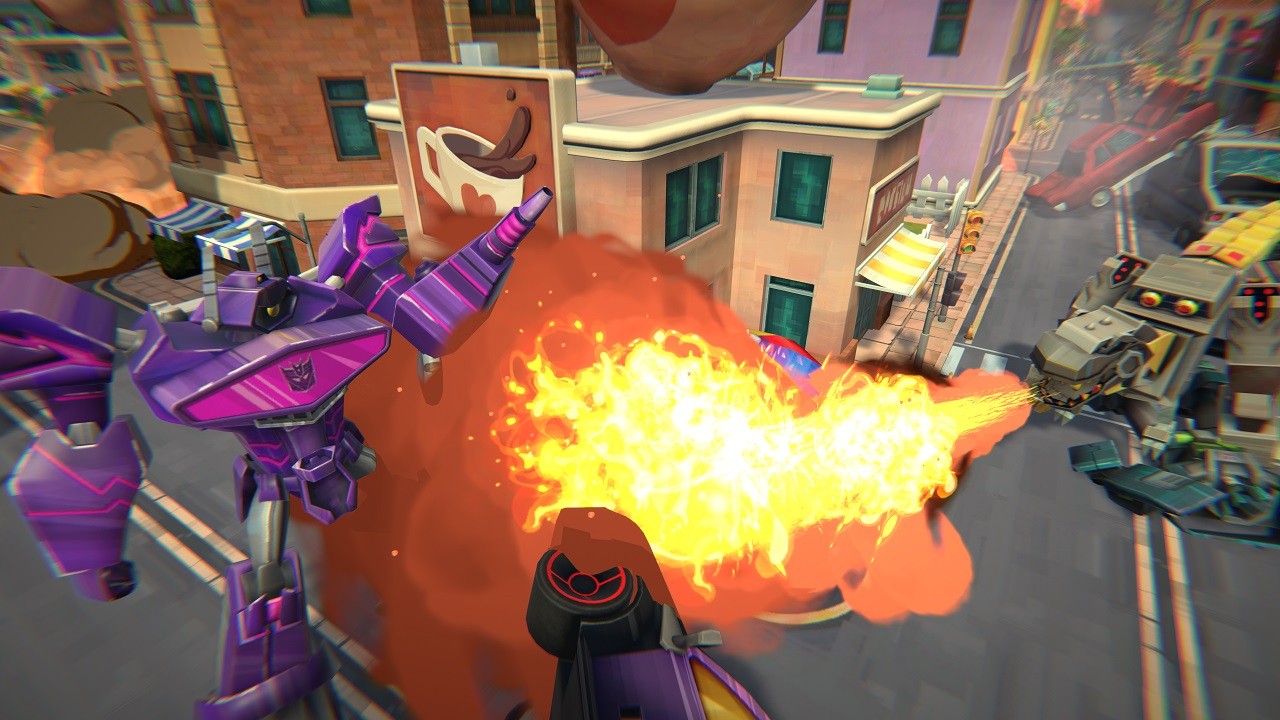 The soundscape is such a mixed bag that I have to address it individually. The music for the game exists, but it’s such a background affair to the voices and sound effects that you barely notice it: I was only aware that anything that remotely resembled a score was occurring when I was trying to decide what to do next. It’s not a bad or a good thing, it’s simply a thing. The voicework for Transformers: Battlegrounds apparently lifts all the voice actors from the Cyberverse cartoon series, and it looks like they did some decent casting there, so that’s a benefit, as almost all dialogue is spoken and players are treated to different expositional comments from both sides of the field. However, and this is such a big deal to me, there isn’t a good “transforming” sound effect. You only transform when you do certain attacks (which is already a minus) but the sound for it doesn’t match the iconic metallic henshin noise. This is over the plate kind of material, and it bothered me that it wasn’t there. If I’m wrong and the sound is there, please let me know, maybe I’m just really going deaf and I kept missing it, but the lack of presence made me bummed.

Though the game is visually appealing and it seems to run very well, it’s difficult for me to recommend Transformers: Battlegrounds to anyone who isn’t under the age of 11, and I bet there are plenty of 4th and 5th graders who could actively school me in games like XCOM or Hard West. However, the entire approach to the game is too generous, even in later levels. Thanks to the action points and how they limit the fighting, every encounter is basically a guerilla approach: move close, attack, run away. Later, rinse, repeat. It doesn’t ask so much for strategy as it does patience, and the patience to run out the clock by watching most Deceptions cluster together and then waiting for Grimlock to do his flamethrower attack before running away. It’s fun enough in small doses, and it’s a good introduction to the genre, but, for most veterans of both Transformers and tactical combat, this is all about just transforming and rolling out.

Not the best or worst title out there, Transformers: Battlegrounds has some charm but ultimately falls flat for players looking for more than meets the eye.