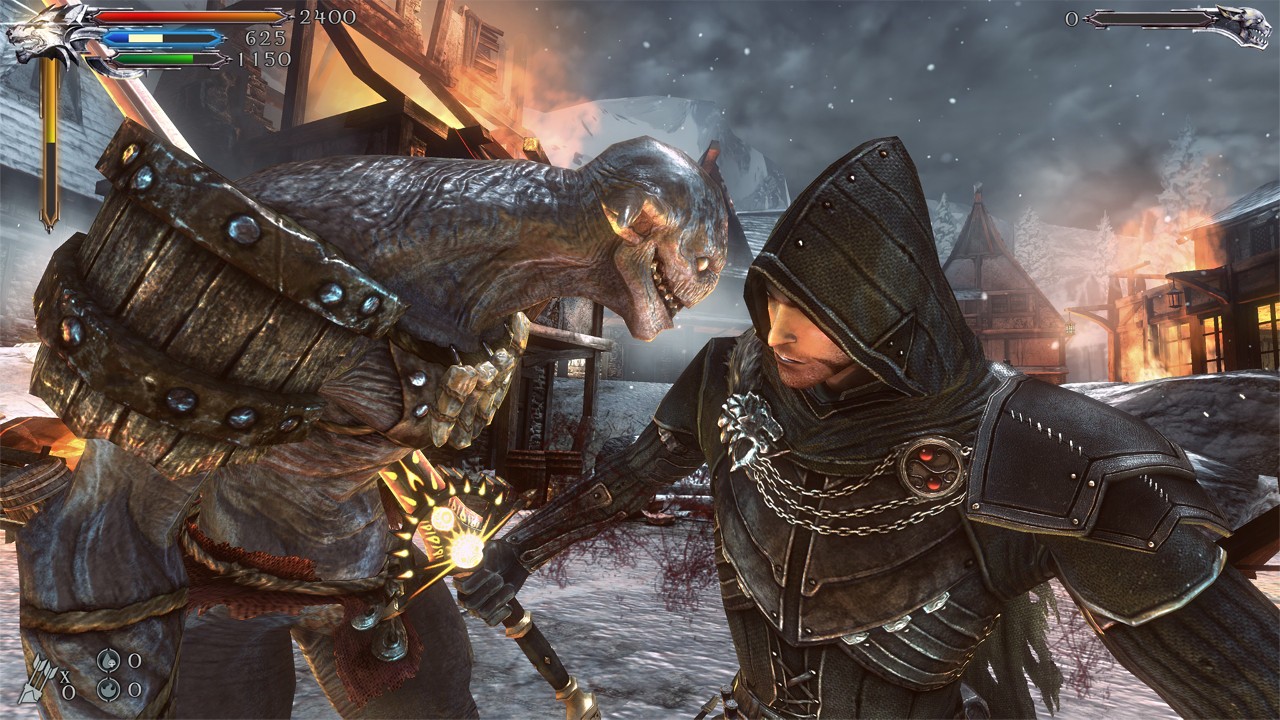 Sometimes the transition between genres isn’t the easiest task for stories and even entire universes to master. Take, for example, the Tolkien books: fantastic works, which turned into pretty good movies until the whole Hobbit debacle burst onto the scene and ruined the goodwill that Fellowship of the Ring had created. Or, really, nearly any movie that tried to make a video game based on the film; though not universally abhorrent, the general consensus is that most of them are shameless money grabs that use slightly more effort than printing Wolverine onto a lunch box (but not always much). The point is, not every movement between worlds is going to go well, and, for every Injustice that became a game, there’s a Warcraft that became a movie.

Joe Dever’s Lone Wolf is based around a series of game books, also called Lone Wolf, also written by Joe Dever. The game books themselves are the awesome evolution of Choose Your Own Adventure stories that I grew up with, but now I actually have some say and decisions that can change how the story advances dramatically. The best way I can properly describe the Lone Wolf gamebooks are if I wanted to do a Dungeons and Dragons campaign by myself, and they’re actually great way to enjoy a more “active” read, if that makes any sense. Lone Wolf, our titular character, is the last of the Kai Monks, a group that manages to combine every trait you’d expect in a hero into a single sect that has conveniently died out to the last surviving member. Lone Wolf goes about the world, righting wrongs and sticking up for the little guy, which means he usually beheads orcs, befriends animals and finds dead children (like, way more than I expected). If you’re at all interested, I would recommend finding some of the books and giving them a try: Joe Dever has written close to thirty, and, although you should probably start from the beginning, it’s possible to drop in on any of them (not really a great idea, but it is possible).

Lone Wolf, as a Nintendo Switch title, takes a brand new story to the mat, which should be exciting in and of itself: it would have been super easy to simply port one of the existing titles to a game, but Mr. Dever decided to actually have something original in this game creation. Lone Wolf, while out wolfing, gets wind that the village of Rockstarn has ceased communication with the neighboring towns and cities, and decides to go investigate. He finds that everything’s terrible, and the evidence suggests that the Darklords (who shouldn’t need to be explained as “chief bad guys”) decided to decimate the town for unknown reasons. Not being a man of passive acceptance, Lone Wolf sets out on a quest to make things right, which means killing a whole lotta bad guys and also finding out what set off this horrible event. Lone Wolf encounters many curious characters in this journey, and he must use his luck, skill and wits to finally uncover the truth and bring justice to the lost Rockstarnians. 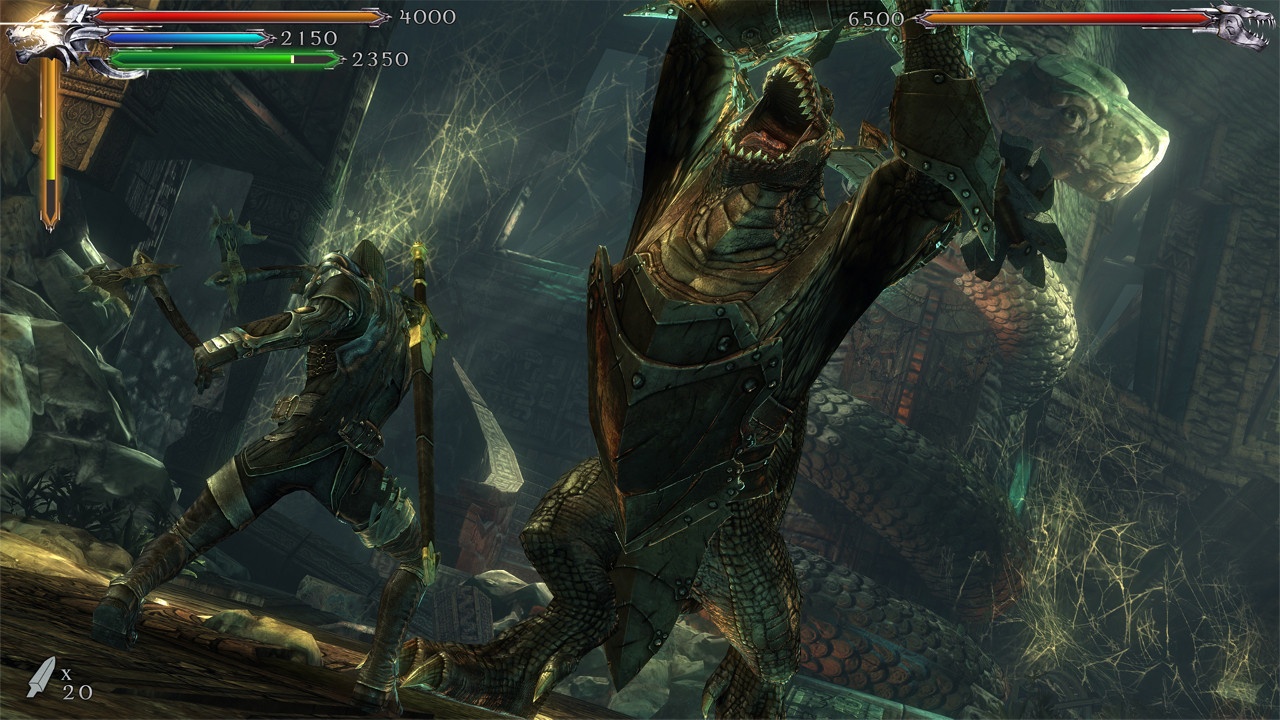 First and foremost, if you are not a fan of reading, I’m confused as to why you’re looking at this review, but, in any case, do not pick up this game. Seriously. Joe Dever has stated a dissatisfaction in previous attempts to bring his books to the digital age, and the only way to properly do this was, in essence, to make an ebook on cocaine. There are fantastic graphical moments and some dope combat that we’ll get to in a moment, but, at the heart of everything, Joe Dever’s Lone Wolf is a literal gamebook that’s on the Switch. There will be pages upon pages of reading that will take, and I’m not exaggerating, HOURS. It’s properly broken down into some good chunks and broken up by different events and checks and such, but there is reading, and it is quite a read overall. As someone who grew up with R.A. Salvatore and Margaret Weis in my normal library, I enjoyed the hell out of myself and know fans of the Lone Wolf books themselves are going to have a field day in this new, augmented version of their beloved gamebooks. But, if you’re hoping for something that’s more action packed (like The Shadow Sun or other D&D adaptations), you’re in for fantastic disappointment. This is a book brought to life but still kept as a book. Be warned.

Having said all that, Joe Dever’s Lone Wolf does a fantastic job of bringing the gamebook experience to a video game console, creating button events and essentially quicktime moments to replace dice rolling and dredging through character sheets. When you reach moments of skill decision (trying to scale a wall, or encountering wild animals), Lone Wolf will have choices based on the character you decided at the very beginning. Dumped some skill points into Animal Empathy? Good news, you can probably chat to the angry bear and reach a resolution that doesn’t involve getting eaten. If you haven’t done that, now you either need to make a strength check to fight the beast or a dexterity test to run the hell away. Unlike the game books, you can’t cheat to get a better ending by pretending you actually wrote down a skill set you didn’t choose at the beginning. Again, D&D for one sometimes results in people fudging their character to get better choices, but this video game won’t allow that. It’ll even show you that, had you picked this other trait, it might be a choice, but you didn’t, you decided weapons mastery was more important, so deal with it.

Once you get into combat encounters (which happen quite often), the game shifts gears entirely, and now you’re suddenly in a ATB style match where you need to pick skills, strikes and potions with a limited amount of activity each round. I adored being able to set up the combat in this way, choosing a couple of different strikes (and timing the joysticks correctly for extra damage) before falling back and hiding behind my shield. This is a cool moment where it feels like the development team, Forge Reply, wanted to show what they could have done had they been given a bit more freedom in deviation. The combat is exciting and engaging, full of choice varieties that are wildly different depending on what weapon and disciplines you chose from the beginning, and some killer animations when striking down enemies and being hit yourself. I don’t think this would have been nearly as good as an open world, 3rd person kind of game, but my God the combat is satisfying. 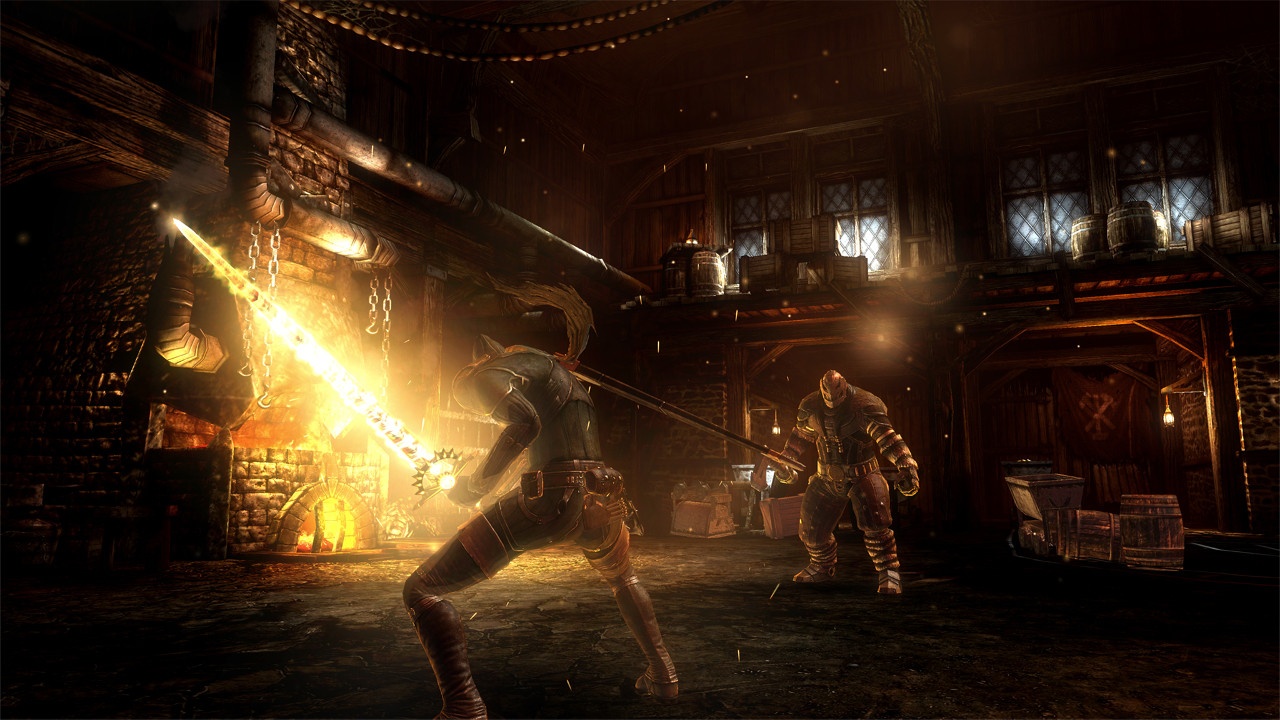 The puzzles, additionally, are crafty and port well into the way the game presents itself. From lock picking to cube shifting, Joe Dever’s Lone Wolf gives players tons of opportunity to engage in the world in ways that maybe wouldn’t seem obvious at first, and play well as actual skill checks instead of, again, dice. Using patience and speed, players will often need to manipulate puzzles with two joysticks and a button or so, trying to figure out exactly what is needed to move on, unlock the chest or figure out the riddle before them. There are times when I felt the puzzles were a bit unbalanced, but that was mostly because they felt odd to manipulate without touch screen controls, which are sorely missing from this port. I found that strange, since this launched on iOS originally, and I couldn’t quite figure out why they were left at the door when Lone Wolf came to the Switch. In any case, it was equal parts handling and actual difficulty, but they still managed to keep my interest and, again, break up the writing when needed.

The biggest surprise of all with Joe Dever’s Lone Wolf is the sheer amount of time you’ll drop into this game. If you just keep your head down and focus solely on the story, we’re still talking close to twenty hours of gameplay with just the main plot in your sights. There’s been enough added into the game (as this is technically the HD remaster of the mobile version) that it can consume your week, and that’s with a single playthrough. Now think about the time that comes from the different combinations of characters you could make. Sure, this time you’re a bruiser who’s main approach is to beat things until you get answers, but what if you went more subtle the next time around, or even focused more on magic? The song remains the same but the extra accent notes are totally different, and that’s damn exciting. Not all players are gnashing their teeth and waiting for another AAA to fall onto their plates: some want an exceptionally quality indie title that’ll keep their focus for a long time. This is one of those games.

Nothing can totally replace the enjoyment of sitting around a fine mahogany table with a group of friends, a six pack of beer and the latest module that your DM found at a flea market last month. But it’s cool when games attempt to do so, and Joe Dever’s Lone Wolf brings a really great recreation of the gamebook approach to the console player. If you don’t mind (or even love) a lot of reading, stay a while and listen: it’s certainly a tale worth hearing.