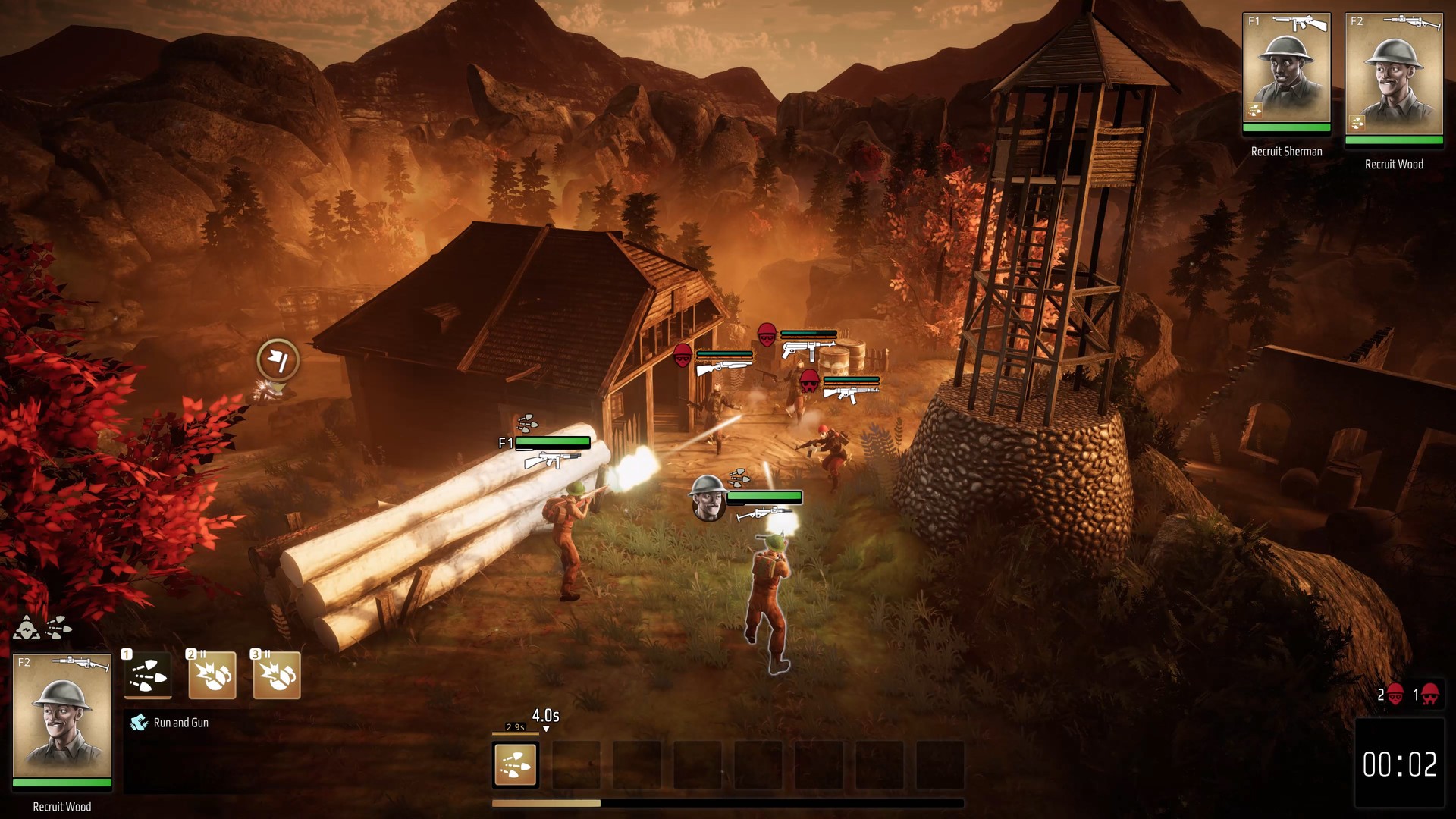 Broken Lines is a narrative-driven, turn-based, combat game set in an alternate World War II. The player controls a squad of eight members of the Royal Army and leads them throughout the aftermath of a crash landing in unknown territory, somewhere in a fictional country in Eastern Europe.

While a big part of Broken Lines is its combat, I have to say that I was surprised at how strongly this was intertwined with the game’s narrative elements. At first glance, if you see screenshots or check out a video, you might think that all there is to Broken Lines is combat, but while that is certainly the most prevalent gameplay aspect, the game also offers much more, but we’ll get to that in due time.

Broken Lines offers a carefully crafted single-player campaign that is designed to be played through multiple times and still feel fresh, thanks to a branching mission structure and several different events that can be approached in different ways. In any case, whether you’re looking for a challenge or you just want to take a stroll and enjoy the story, the game certainly has you covered. Besides three baseline difficulty modes, there is also a surprising amount of difficulty customization, with the game offering options such as being able to stop enemies from using explosives, and increasing or decreasing enemy and player damage multipliers. There are also eight informative tutorial stages that will quickly teach you everything you need to know before diving into the campaign.

Now, while each campaign mission takes place in different places, their structure doesn’t vary much. They all take place in open spaces, there’s barely any indoor fighting, with the most prevalent themes being villages or enemy bases, and objectives are pretty much always the same, go to point A and clear all nearby enemies. With that said, the levels are well designed for the most part, as they tend to offer multiple ways to approach enemy positions as well as bait them into the open, thanks to a clever disposition of all sorts of cover and structures. 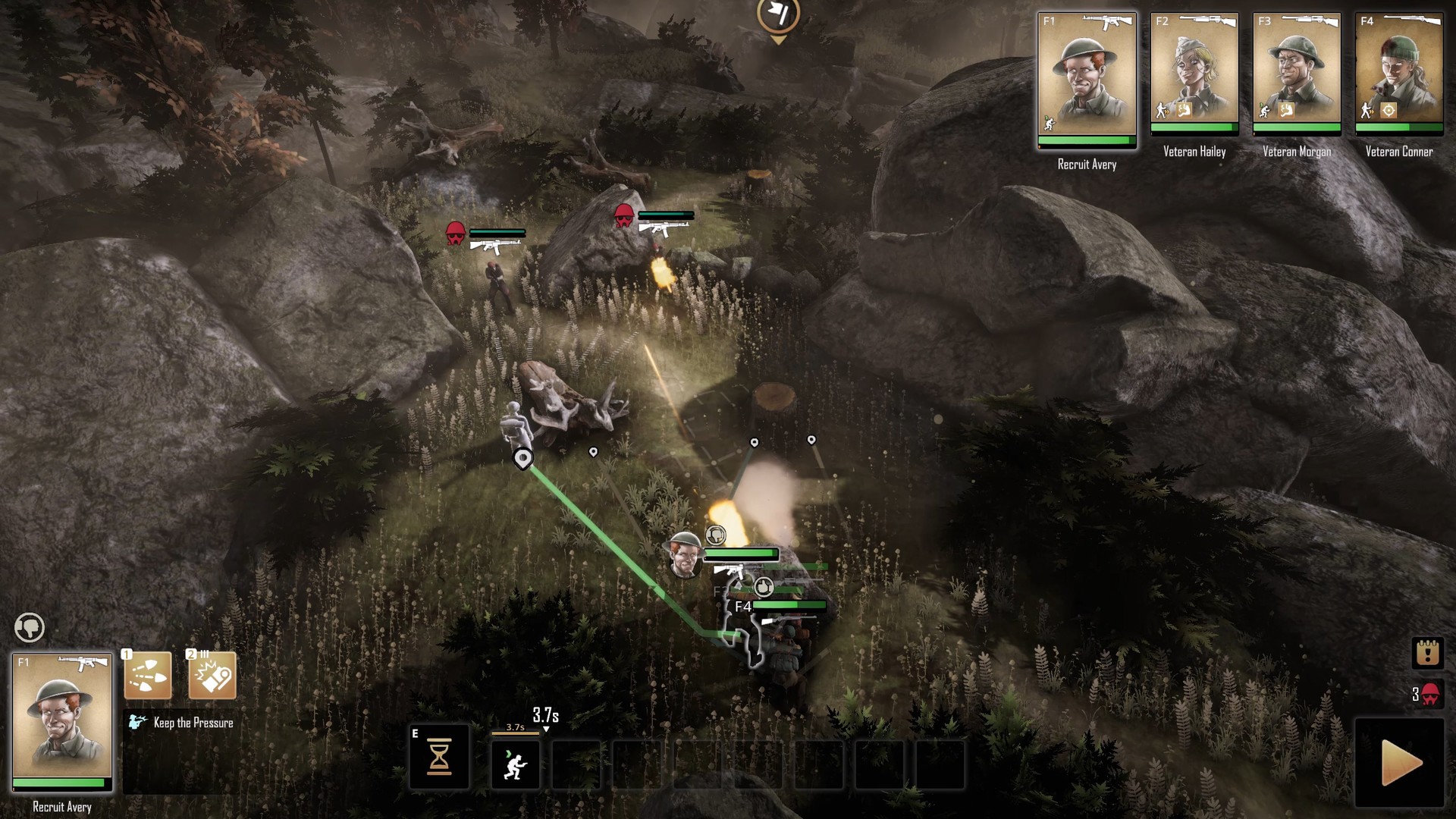 Given the open design of the maps and the distribution of enemies throughout the levels, you’ll find yourself engaging in multiple fights as you move from the starting point of the mission to your objective, as you keep on running into enemy squads placed in key positions. This kind of mission design works perfectly with Broken Lines turn-based combat system, which should feel extremely familiar to people that have played the classic Frozen Synapse.

There is no real-time movement or actions in Broken Lines, not even when you’re out of combat. Broken Lines features a turn-based system that revolves around two phases, planning and action. In the planning phase, all you do is issue orders to your squad members, where you want them to move, and if you want them to use an item or an ability, but you can also gather information thanks to the game’s wonderful UI which I can’t praise enough. What I mean by gather information is that the game perfectly conveys what is going to happen once the action phase begins. For example, the game will indicate if you’re sheltered behind cover when you’re within an enemy’s line of sight, and it will also tell you the hit chance of both your and enemy units hitting each other.

There’s a great deal of tactical manoeuvrability at your disposal, you can order a unit to fire while moving, or you can order them to move while crouching in order to draw less attention and more easily avoid enemy fire, or to run straight to cover, but these two options don’t allow your soldiers to shoot back while moving. There’s also the option to order soldiers to hold their position and fight back, or to simply crouch and hold their fire for whatever time you want, and this ends up tying with the action phase. During the action phase, which consists of exactly 8 seconds, or until you encounter an enemy for the first time, your orders will be carried out and you can only issue new ones once the next planning phase is activated. Furthermore, your troops will automatically fire at enemies within their range and will prioritize the nearest enemy, which makes their behaviour predictable and easy to work with, even though I would’ve preferred to be able to select my own targets.

Undoubtedly, terrain and unit placement play a big role in Broken Lines combat. For instance, while placing your troops on high ground increases the chance of them hitting enemy units and makes them less vulnerable to enemy attacks, placing your units behind different kinds of cover (some can be destroyed) will not only decrease the chances of getting hit, but it will also reduce the damage that your units take from explosions and suppressive fire. Suppressive fire plays a big role in combat since it can pin down enemies and stress them up to a point where they’ll just aimlessly run away, but it’s just one of several abilities at your disposal. Besides that, you also have rifles which can focus on specific targets, shotguns which can knock down enemies, and a wide variety of limited use items such as all sorts of grenades and healing kits. 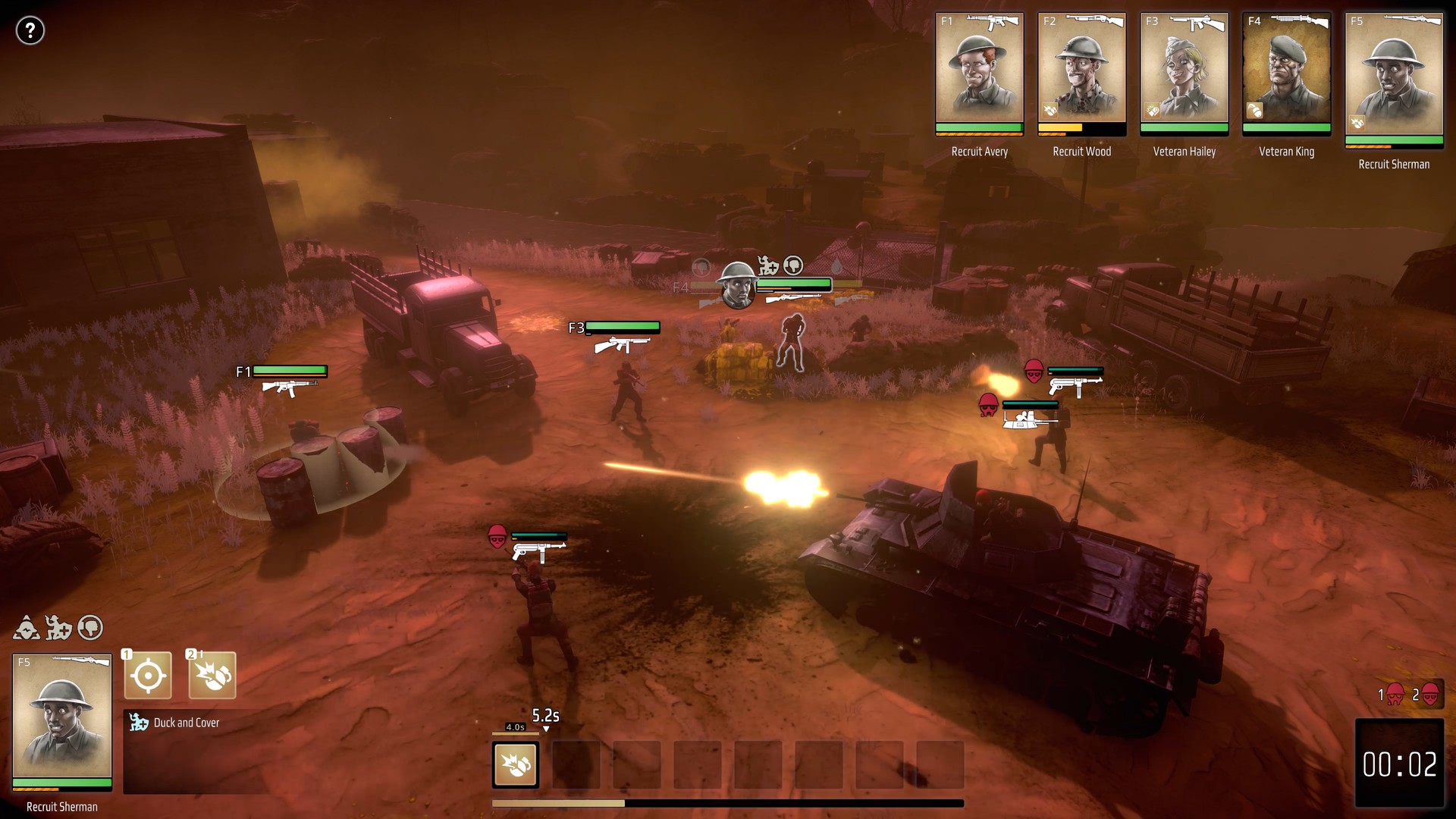 Now that we’ve talked about Broken Lines main selling point, it’s time to discuss its other big gameplay element, the strategic management layer which also happens to tie heavily with the story. Between missions, soldiers get to rest at their camp and you’re able to pick which soldiers you want to take on your next mission. Furthermore, you get to customize their loadout, and this doesn’t only include weapons and consumables, but also passive perks and active abilities. Moreover, there are also two resources that you need to keep an eye on, supplies which are consumed every day by every single soldier, and salvage which can be used to buy supplies and equipment.

There’s also a layer of interpersonal relations and how each soldier feels about their squadmates, every single one of them has their own personality, they aren’t simple cannon fodder for your warmongering campaign. By the way, just a curious small detail, if during combat you happen to place a soldier next to someone they don’t like, they’ll start to lose their composure, and if they completely lose it they will desert your squad. These relations can be improved or worsened through several random events that can occur while you’re in your camp chatting or when you’re selecting the next mission, as different soldiers will want to pursue different goals.

After all my time with Broken Lines, I honestly only have two complaints. The first one is that your soldiers can easily run into each other, which will make them unable to complete your orders, as the AI doesn’t seem to be able to adapt running into another unit by simply finding a new path. Secondly, there are a lot of times where lines of sight completely ignore terrain elevation, in the sense that you can have a soldier on one side of a small hill shooting an enemy that’s on the other side of it, even though both units shouldn’t be able to see and shoot each other in such situations.

Nonetheless, at the end of the day, while Broken Lines might not look or sound particularly great, it certainly more than makes up for it on everything else. Sure, it could use some more variety in terms of mission objectives, but the combat, the story, its characters, and the management side of things more than make up for the game’s shortcomings. The combat is quite engaging and the mystery revolving around your mission only keeps getting better and better as you progress through the campaign. Also, while it took me about 10 hours to complete the campaign, there is certainly room for replayability. The story has a few nice twists, but even after knowing about them I still want to go back and replay the game so that I can choose to take different missions, make different choices, and hopefully get a different ending. I’ve seen people say that this is more expensive than a lot of other indie games, and while I’ll admit that I was also sceptical before playing the game, I can now say that the whole package is certainly worth it.

Broken Lines offers a carefully crafted single-player campaign that is designed to be played through multiple times and still feel fresh.