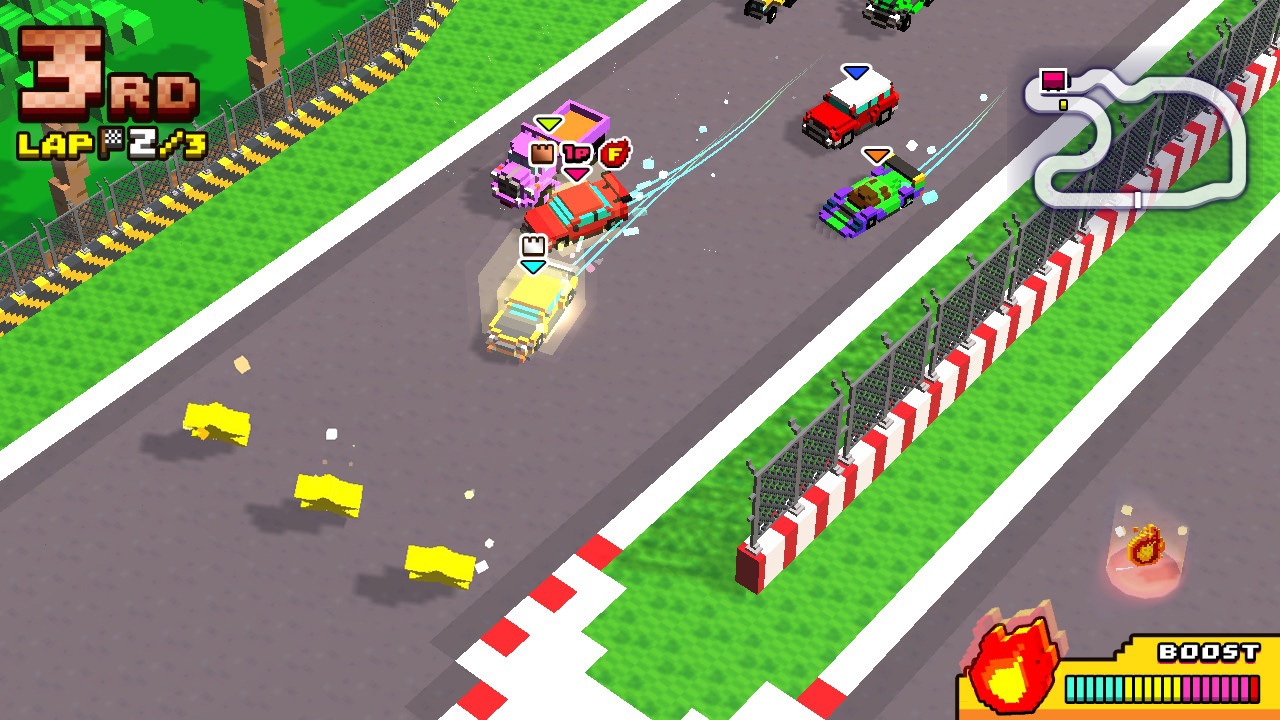 There are a lot of games these days, that rely on stellar presentations or the latest blockbusting graphics in order to sell themselves. Yet, in my experience, many of them fall by the wayside when it boils down to actual gameplay. Not all of them though, as titles such as Horizon: Zero Dawn and Spider-Man have honestly thrilled me with their kept promises of post-production hype. However, it never always used to be like this, as many retro, or older styles of games focused more on gameplay, rather than aesthetics; a trend that still retains its values in many of the indie games that reside on our hard drives today. One such game is Chiki-Chiki Boxy Racers, out now for the Nintendo Switch.

Developed by Pocket and published through UNTIES and Sony Music Entertainment, this retro-styled racer contains a modern style with its Minecraft-inspired voxel presentations, yet boasts a form of playability that simply charms with its elements of old. Everything here offers a simplistic take on its genre, creating an easily accessible game, as well as providing a decent challenge in its racing mechanics. Viewed from a top-down, isometric view, this arcade style game puts you behind the wheel of a series of miniature cars, as you compete over a variety of tracks, as well as take part in some mad-cap party games that cater for solo modes, local multiplayer and online for up to eight people. 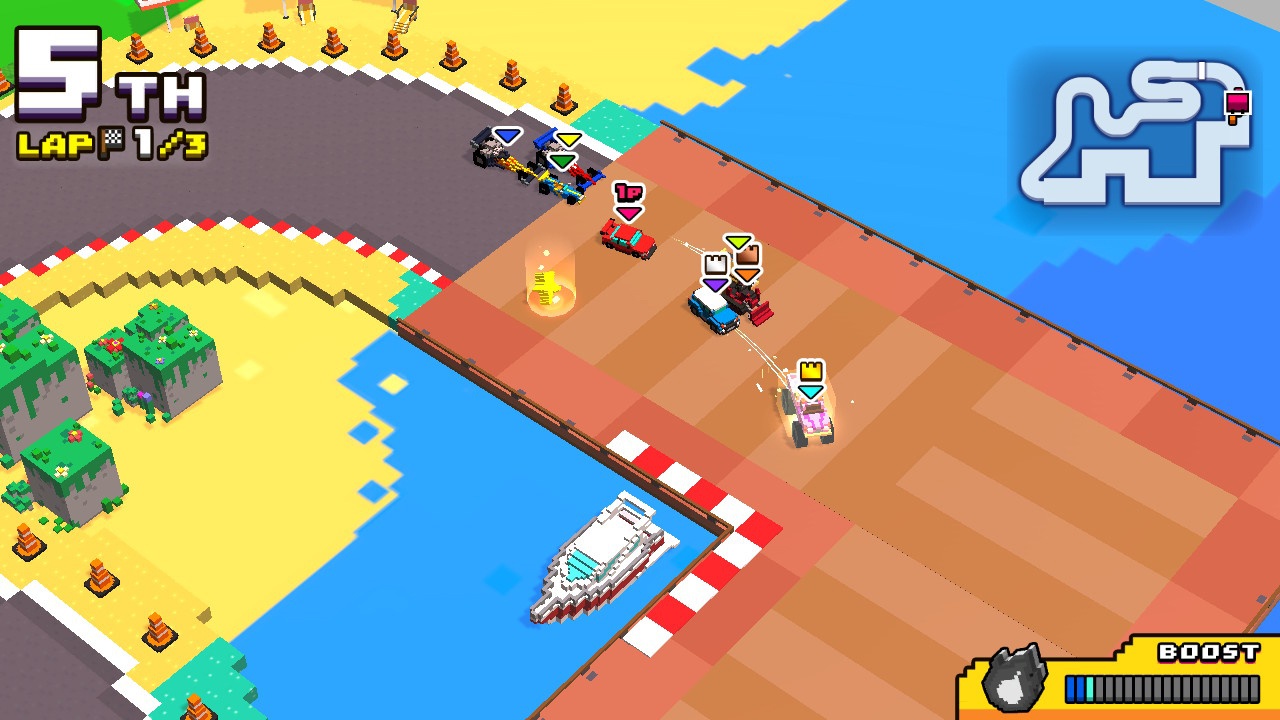 The racing element of the game takes place over a series of twelve different tracks within three different environments; namely city, jungle and beach. You compete with seven other cars, completing a series of laps in order to finish in pole position. The main mechanic here, is to maintain a level of speed through the art of drifting and boosting, as well as avoiding any slow-inducing contact with other competitors, barriers or scenery; the best way I could think of describing how it plays, was that it very much reminded me of Atari’s Super Sprint, at least in terms of playability and fun. There are two control schemes on offer here, stick or handle with stick creating momentum in whichever direction you point the left thumbstick and handle, which plays in a more familiar function, with an accelerate button and left and right steering.

With its focus on a casual style of play, each of the races only take a couple of minutes to complete and their paths contain a linearity that relies on racing lines, rather than shortcuts or branching routes, although some tracks do contain jumps and obstacles to add a touch of variety.  In terms of mechanics, the elements of racing work quite well, with a smoothness of control and an AI competitiveness that keeps you on your toes. With the successful completion of each of the races, you unlock further models of cars, up to a total of fifteen varieties, with each one boasting different attributes from speed to handling.

As well as the racing element of the game, you can also play from a series of four different party games: Coins, Smash, Paint and Goal. Each of the games are of a simple affair, yet provide some of the most compelling and fun aspects of the game; especially when playing in the games’ multiplayer element. In Coins, each of the cars battle it out to collect the most coins, as well as use or dodge bombs and hit the reels button for a chance of winning a jackpot payout. Smash is a demolition derby style game, tasking you with knocking your opponents out of the stage five times in order to eliminate them. Paint follows the same premise as Nintendo’s Splatoon, in that each car paints the turf a certain colour; possess the largest turf and you win, whilst Goal, the last game, plays in a similar way to Rocket League, with a soccer-style game of knocking goals in your opponent’s net in order to outscore your rival team. 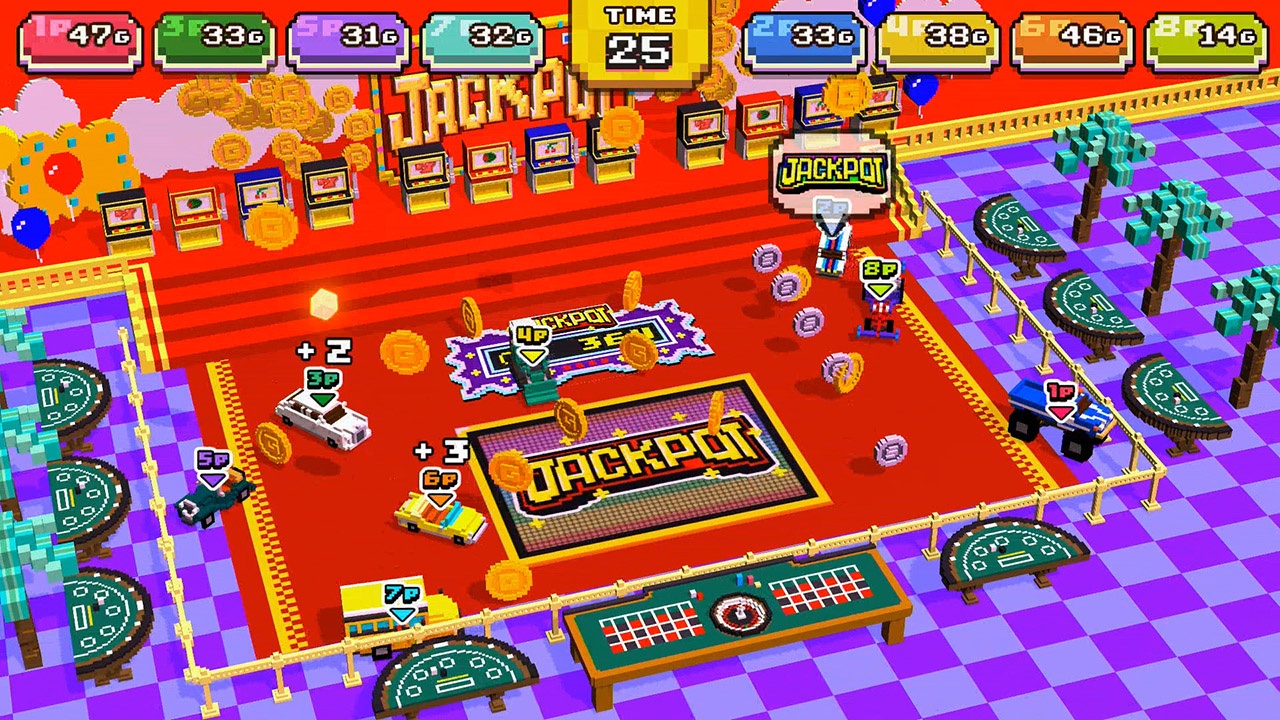 Each of these party games, as well as the racing element, can all be played in a solo or multiplayer capacity; either on a static screen or through teleportation should you fall back far enough from the pack. With the ability to play either locally or online, these modes of play provides good value in its entertainment; especially if playing with family and friends which can riotous fun. Unfortunately though, it can be difficult at the best of times to find a full lobby for online play; at least, at the time of writing this review, it was. Hopefully, things may have picked up by now. However, despite its offerings in a variety of different game modes and play styles, as well as the ability to unlock further vehicles, a distinct lack of any depth or the relatively short time in which you can experience everything, namely an hour or two, presents a game that can be over before it even starts.

Overall, Chiki-Chiki Boxy Racers can be a lot of fun in terms of playability. This isn’t a game that you should be fooled by with its basic aesthetics, for what it may lack in presentation, it more than makes up for in terms of gameplay. Whether you play in the game’s racing mode, or in party play, the mechanics in its control and execution, as well as the fun factor in its competitiveness, provides a good experience overall, but only in a casual capacity. Its severe lack of depth and content can make the game rather short and the difficulty in finding online opponents severely limited the scope of what the game can potentially offer, at least in terms of my experience, it did. That said though, what I did enjoy about this game and what stood out the most for me, was its level of good old-fashioned fun and, for me, that’s a very important element in the art of playing of video games.

What do you get, if you cross Minecraft with Super Sprint? Chiki-Chiki Boxy Racers is what you get, plus a spattering of fun party games too.