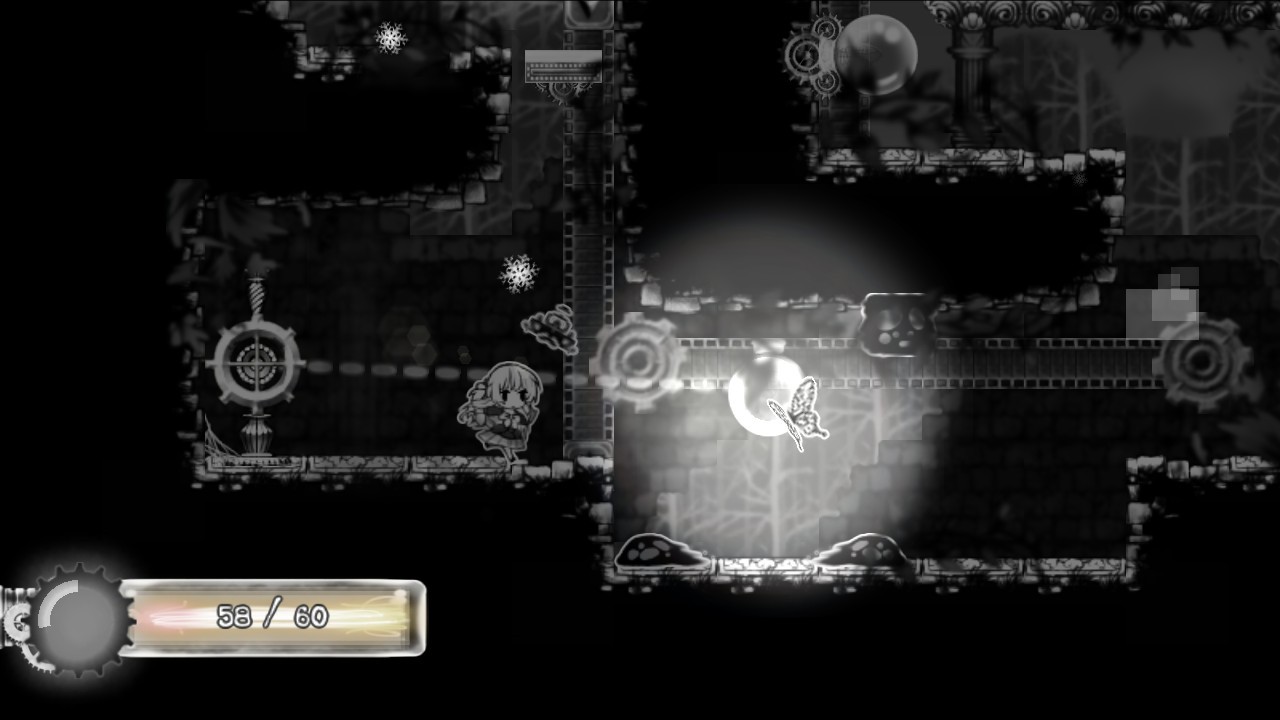 Honestly, I’m annoyed. When I first came across Nevaeh, I did not understand what to expect from this game, but the presentation looked good. I was intrigued by the gothic layout and the black and white mannerisms, and Alpheratz (the developer) had done a solid job of making me totally unaware of the plot. Thinking I was going to experience another interesting game where a cute girl was thrust into danger or darkness, I merrily stepped into the cockpit of Nevaeh and decided to see what on earth was going on.

From the drop, something was weird. You don’t have any dialogue or exposition for what’s going on: everything is told through a series of wordless interactions between the main character and others, with strange pictograph speech bubbles to fill in the details. However, these speech bubbles tell you very little unless you’re in the developer’s head, so I had to carefully piece this together by watching what was going on and think from there. Apparently, you, the main character, are a girl who likes to hang out by a coffin, because why not? One day, you decide to enter a Tower to go get some light, and at the top of a Tower is a shiny butterfly. Now, this butterfly is behind a massive glass orb that you need to purposely go out of your way to break, so naturally you do. You grab the butterfly, because it’s clearly the source of light, and immediately regret all your actions. Turns out that darkness is sort of a bad thing, and you’re now the only one in possession of light. Oh, and the witch you stole from isn’t too happy, so now you’re trying to put the butterfly back without getting killed to death. To recap: you’re bored, steal something that is the source of life and light for everyone, and now decide to bring it back. Got it.

Nevaeh is a puzzle platformer that works with the ideas of light, traps and some minor enemy stomping in order to move forward. You, the Girl, can walk, slide and jump to move around, but you gotta time everything well. There are globes all over the place, and some are lit and some are not: stay close to the lit ones. Everything and anything hurts you in this game, including standing in the darkness. Being away from the well-lit areas results in a slow depletion of HP, whereas running into massive saw blades or getting attacked by monsters is a much larger hit. The whole game is in black and white and the only colour you see is red when you take a hit (and the red is right around your HP bar). It really helps to sell the idea that “you’re hurt,” but don’t take it too seriously: HP naturally regenerates over time, so just take it easy and relax somewhere light if you need to recover after a particularly bad encounter. 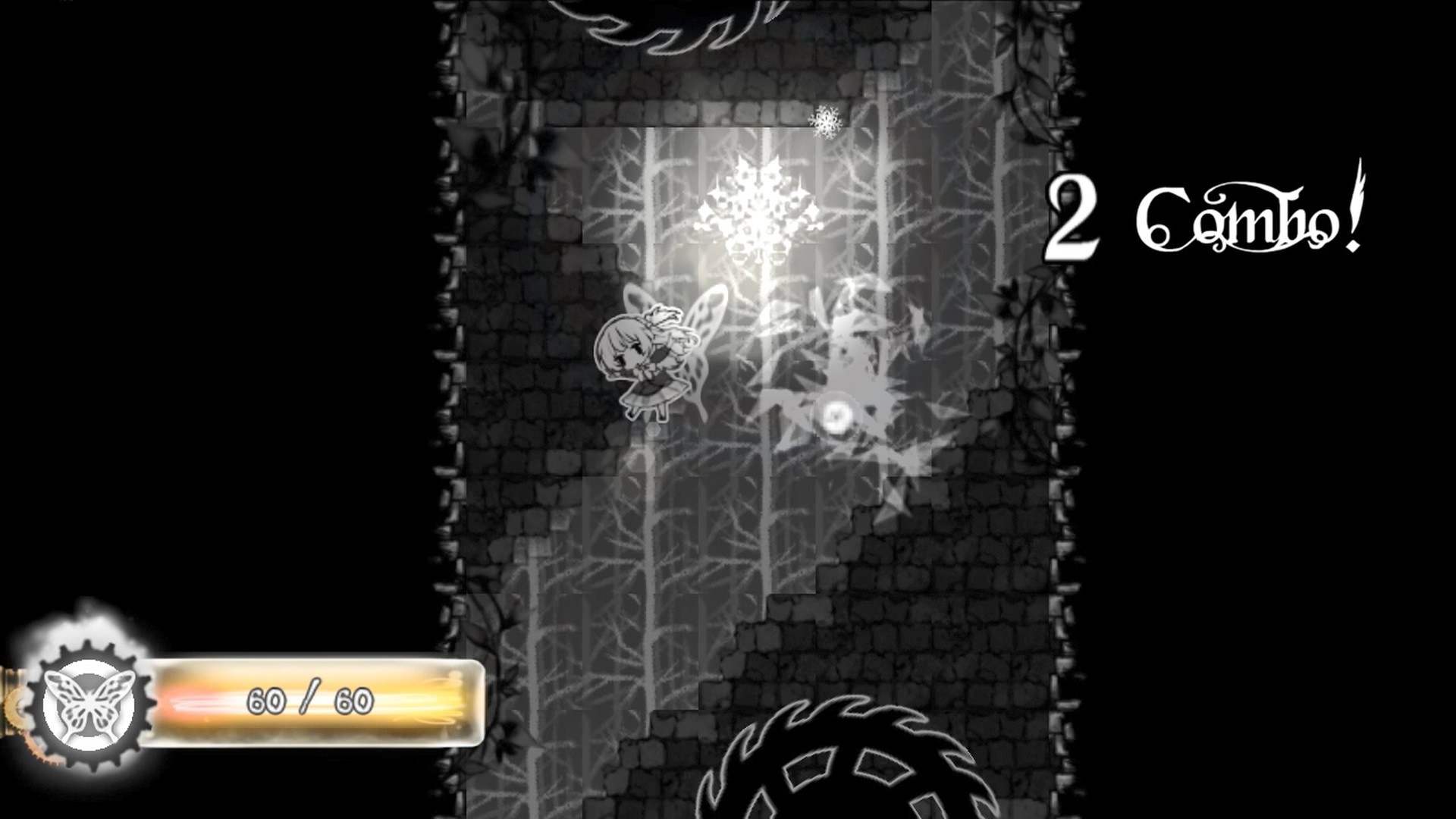 The butterfly that you stole is your main component in survival and unlocking what to do. You can send the butterfly to any number of globes that exist on the screen, thus powering it up and providing light in certain areas. Light is the whole name of the game: you use it to make certain platforms disappear, to make other platforms start moving, and to also render some enemies intangible and harmless. Rather than take the easy route of just super peppering everything and just lighting up the world, Nevaeh has the butterfly work on a two part caveat. One, you need to recharge between butterfly distributions, forcing you to occasionally seek refuge and retreat. Two, not everything is solved by lighting up everything: occasionally, you gotta decide which of the bulbs is most valuable and essential to move forward. In that same vein, you need to be careful to understand sometimes the light activation is a timed effect: you might only have that bulb for a few moments before it mysteriously goes out.

Nevaeh should be an enjoyable and interesting experience. Storytelling without spoonfeeding information through language is a clever tool to break down barriers and allow people from all walks of life to get into the game. The concept is simple enough: remorse over a selfish action and now trying to correct the mistakes. In that same idea, the game idea is fun in having some slightly violent consequences tied to a childish setting and avatar: all the humans that we meet look quite young and move/behave as such. It’s a great contrast to some of the darker elements, like when you’re being chased by the Witch at the beginning or need to vault over some spear-like spikes in order to survive. While the soundtrack isn’t stellar, it suits the mood, giving a sinister music box style atmosphere to it all.

However, the problem is that Nevaeh is a bad combination of boring and broken. On the one hand, it gets boring: the levels are oddly proportioned in a way that leaves the player hanging on to different areas, totally unawares of what is above or below them. This might not seem like a bad thing (certainly adds to the thriller mystery element of it all), but it requires you to navigate the butterfly into areas you haven’t visited yet with your physical self. This means you basically get a preview of what’s to come while actively turning on the mechanics or disabling the traps that could, otherwise, be troublesome for you. The result is that there isn’t a lot of tension for a majority of the game: you just move forward, cast out the butterfly, decide where to put it, and then wait for the butterfly to recharge. The butterfly stops time, so there’s no inherent danger while trying to get the right position or figuring out what to do next. 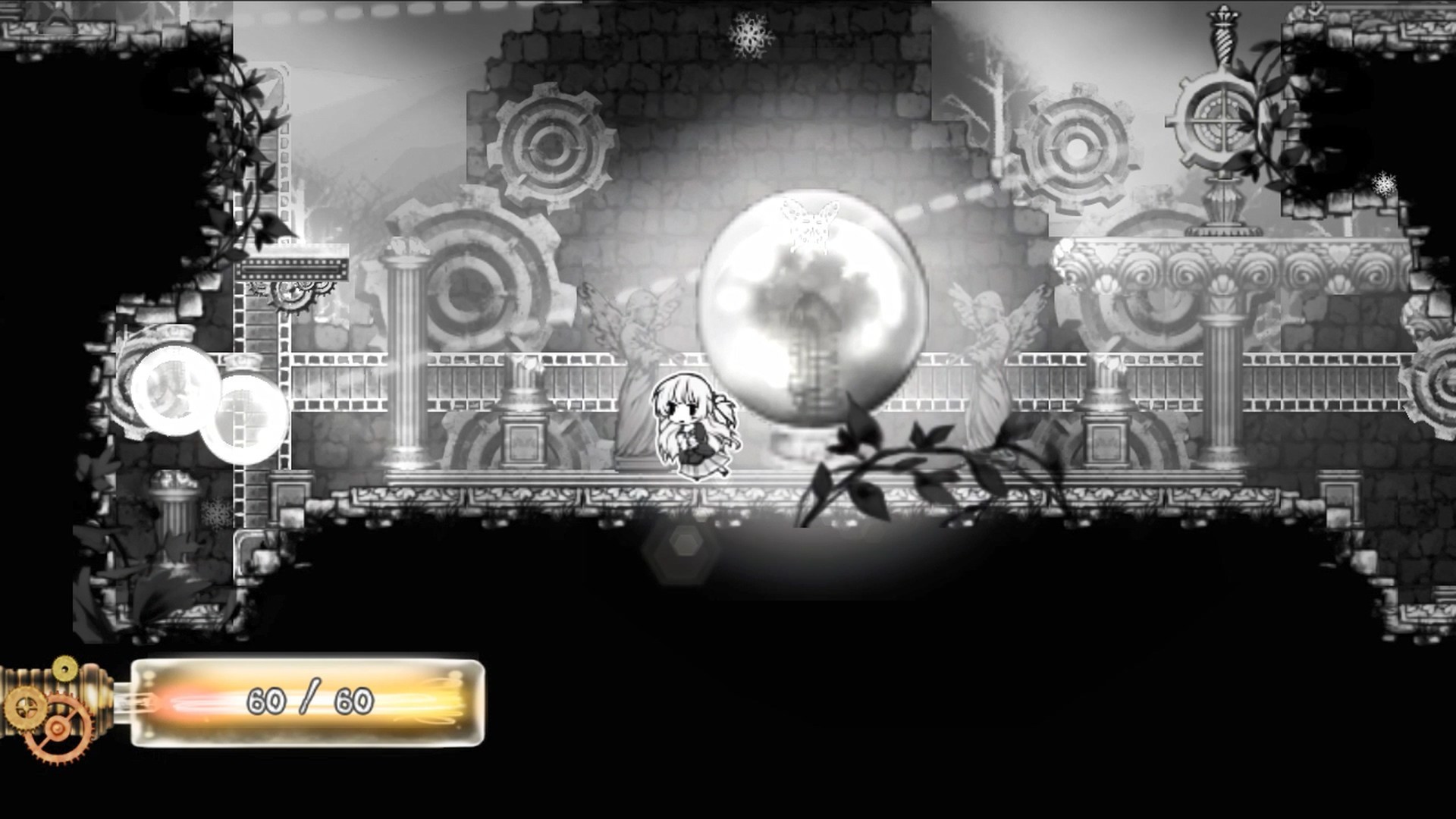 Additionally, though, I haven’t had nearly as many problems with game crashes on the Switch in recent memory as I have with Nevaeh. Due to everything I said above, The Girl has this terrible habit of somehow getting sucked into the nether of the gameworld, never to return. On FIVE different occasions in different areas, I would send out the butterfly, and, by the time I anchored it, my character was gone. It was like she absconded into the night to a different game, only she was nowhere to be seen. This would be awful enough, but to wherever she vanished counts as darkness, which meant she would begin slowly losing health. The mental games that come with realizing that you’re playing a game about the dangers of the shadows and then having your character pulled into a permanent, invisible shadow realm where you slowly die is something messed up and totally unintentional from the devs. Having to then quit and pray that you respawn somewhere close was emotionally taxing, and not enough was coming out of the game to make it worthwhile.

The bugs can be ironed out, so Nevaeh doesn’t need to worry much in that department. The lacklustre game itself, however, is a problem to the core. You walk around with paperdoll movements, you set your butterfly, you occasionally need to move a little quicker to ascend or descend so that you don’t get caught in a trap and then that’s it. There’s just not enough urgency within the game to keep me locked in, and I doubt it’ll be enough for most players. I get that Nevaeh is heaven backwards, but this is just straight up backwards all on its own: no heaven needed.

Decent art but boring gameplay, Nevaeh is just a lackluster title that leaves me indifferent to the fate of the game world.