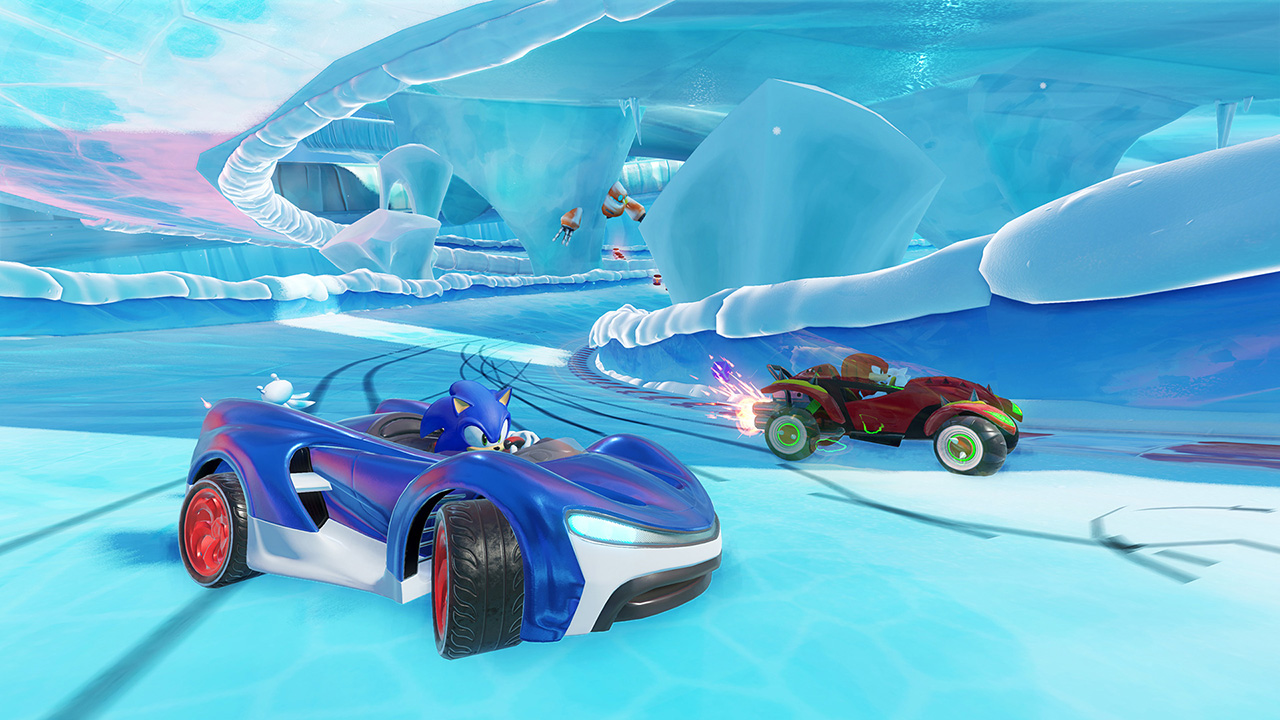 Well, to answer that you have to address the elephant in the room – Mario Kart. The bar for arcade racers is set very high by Mario Kart so really you cannot avoid drawing comparisons with Nintendo’s giant franchise. Of course, they are not mutually exclusive, so they can both exist in their own right but there’s no denying that consumers will hold this to the standard set by Mario Kart. Team Sonic Racing does not do much to evolve the formula besides its focus on teamplay, so it all comes down to the execution.

That focus on teamplay certainly is the biggest differential with Team Sonic Racing versus its competitors. In Team Sonic Racing, teamwork really does make the dream work. Here, you are racing as part of a team of three racers and all three must work together. You can cross the finish line first and still end up not winning if your team does not do well too. There can be up to four teams of three that can compete, for a total of twelve racers at any time.

The important decision you will have to make when picking your team is what archetype you pick. That’s because each racer belongs to one of three categories: Speed, Technique, and Power. These distinct classes dictate every character’s stats and also what items they can pick up. Each class has their own unique abilities and skill sets that bring with them their own pros and cons. 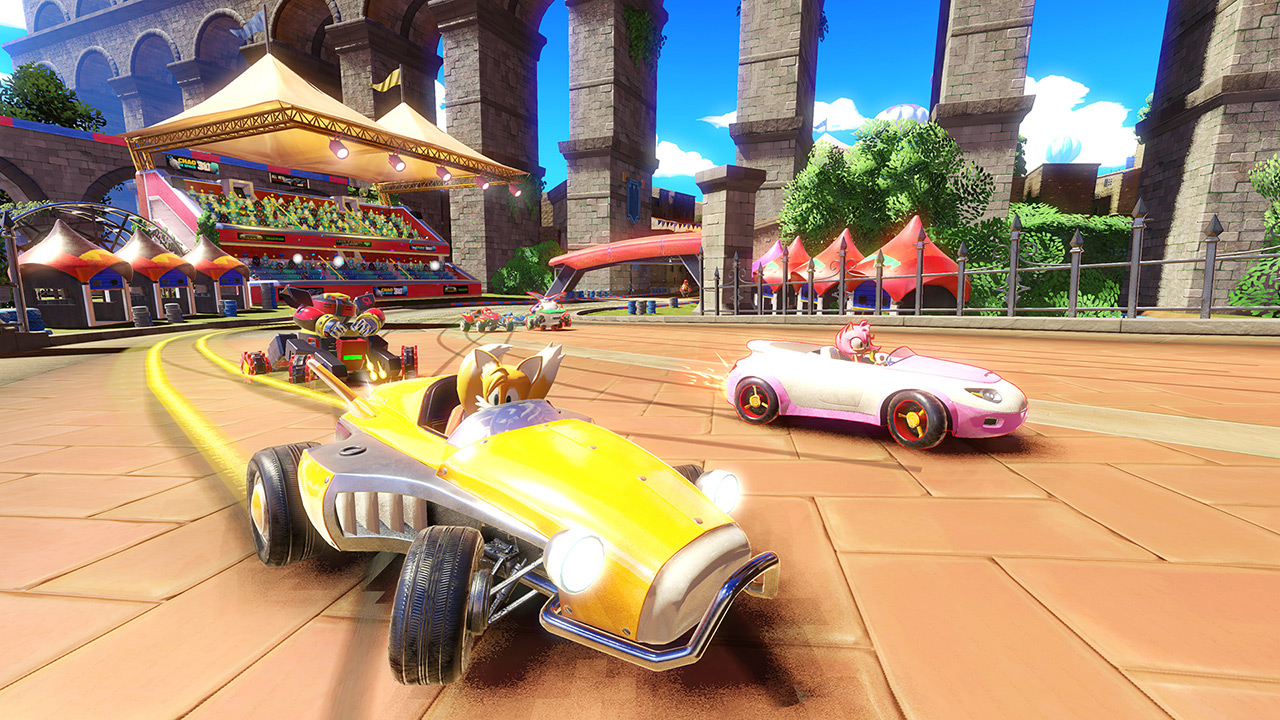 Firstly, the Speed class focuses on… well you can guess… speed. This means characters in this class have the fastest top speed. They also have well-balanced handling. The drawbacks of the Speed class is the fact that they have weak defence and poor acceleration. Secondly, the Technique class focuses on nimble handling and precision driving. It also increases acceleration and steering stats. This class also has the ability to cut corners on rough terrains without being slowed down, but does have a drawback of having a slower top speed. Lastly, the Power class focuses on defense and boost. This class can smash into barriers without being slowed and also does not spin-out when damaged. However, it has the worst handling and speed of the three classes.

Team Sonic Racing offers up a wide range of varied modes to keep you coming back. From Grand Prix to King of the Hill, there is plenty of variety to keep you playing and entertained. In terms of roster size, Team Sonic Racing has 15 playable characters at launch. This is slightly disappointing when you consider its predecessor, Sonic & Sega All-Stars Racing Transformed launched with over 20. Albeit, this time this is a standalone Sonic-only title with none of the Sega all-stars such as Ryo from Shenmue. This seems like an odd regression and is perhaps down to the “team” aspect of Team Sonic Racing, but still feels like a let down. Here is a full list of the characters available at launch:

What Team Sonic Racing does better is contain 21 tracks from across the Sonic Universe. You can speed through your favourite locations from various Sonic games such as Planet Wisp and Seaside Hill. 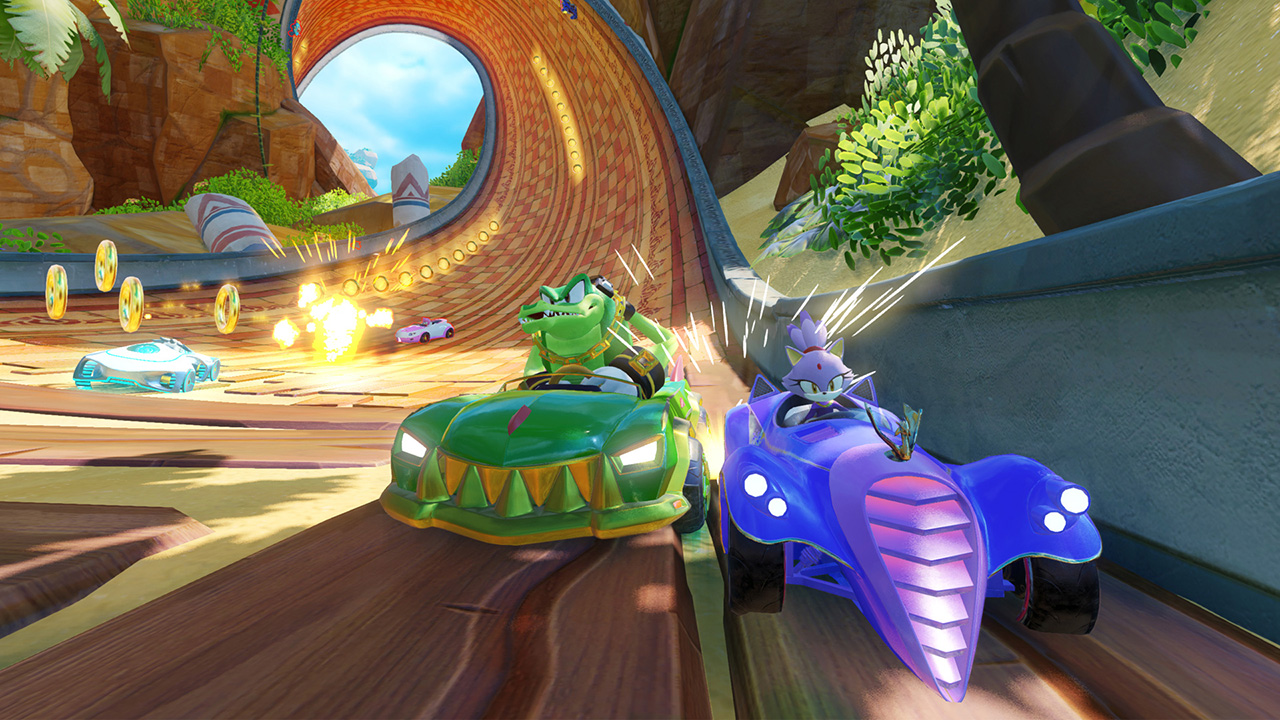 Aesthetically, Team Sonic Racing is very pleasing on the eye. For the PS4 and Xbox One we get a native 1080p crisp image and the Switch isn’t far behind at 900p. Resolution is not everything though, as its really is the graphics that make everything pop out of the screen here. The characters exude personality and the tracks are thoughtfully-detailed and rich in colour.

Ultimately, Team Sonic Racing is a good-enough kart racer. It is a worthy addition for fans of the genre, but does not match the standard set by Mario Kart, or even other competitors such as Crash Racing. The exclusion of the Sega all-stars feels like a step backwards, as it limits the roster. However, for what is on offer, there is plenty of content to keep you playing and entertained and it does the Sonic the Hedgehog universe proud, unlike a recent movie reveal. For that reason, Team Sonic Racing might not be the best kart racer out there, but it’s enjoyable and stands out enough thanks to the unique team-oriented gameplay.

Team Sonic Racing is a good-enough kart racer. It is a worthy addition for fans of the genre, but does not match the standard set by Mario Kart, or even other competitors such as Crash Racing.