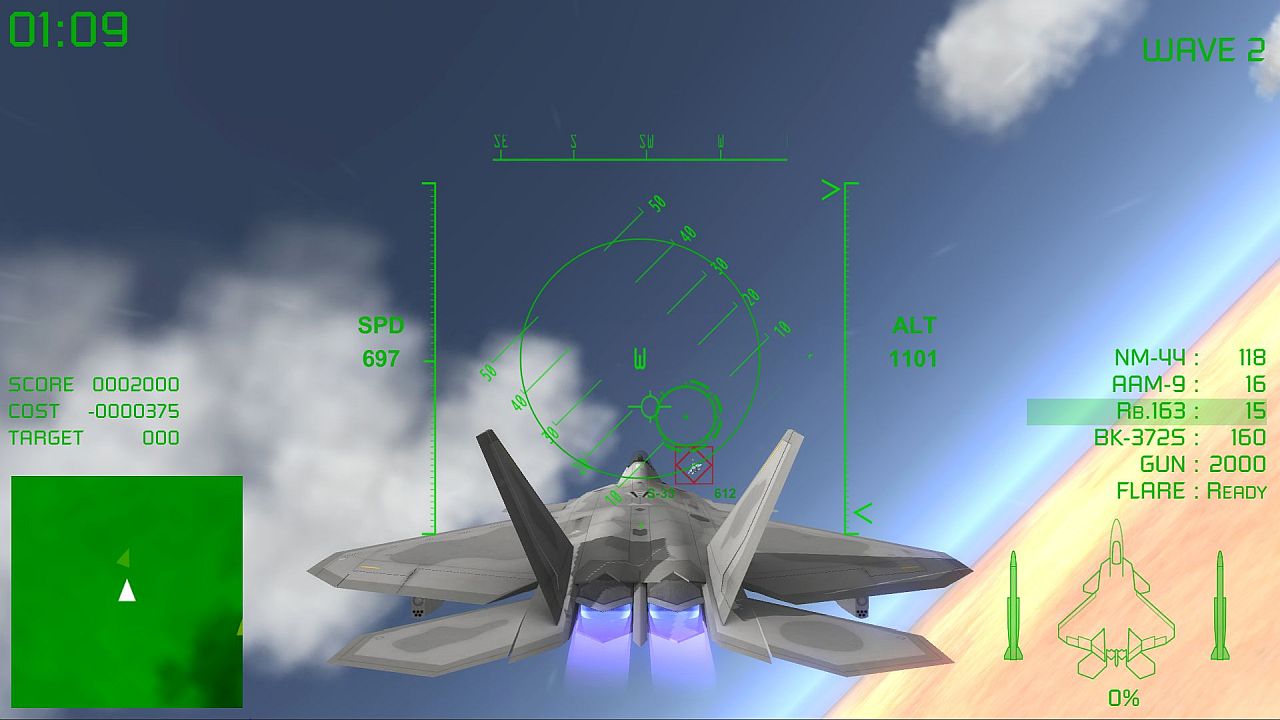 After twelve barren months of having no aircraft in the sky on the Nintendo Switch, it’s library has since seen an influx of air traffic control that has seen a number of aerial based titles take-off upon the system. The latest of these flight simulators comes in the form of Vertical Strike: Endless Challenge, an arcade style of fighter jet combat that sits somewhere between the gameplay of Afterburner and Ace Combat.

Developed in conjunction by Nrtwd, POLi-LiTE and Project ICKX, with publishing through Active Gaming Media and Playism, this modern arcade shooter provides you with an endless challenge, as the title implies, in two modes of play: Anti-Air and Anti-Ship. With two aircraft to choose from, the SAF-22 ‘Slayer’ and the experimental XSF-3A, you choose your loadout, from gun pods, missiles and unguided bombs, before strapping yourself in for a high-octane sortie against an endless onslaught of enemy forces.

As the two game modes suggest, one is specifically an anti-air campaign, whilst the other is an anti-ship sortie, although air threats do remain too in this mode. In typical fashion, there are two camera options, third-person and cockpit, along with a HUD which details ammo counts, altitude, air speed and target acquisition. Once airborne, you are presented with two landscapes, depending on what game mode you are playing; either desert or oceanic. Hostile targets are then labelled and, once lock-on has been achieved, you can fire missiles or use your cannon to destroy any threats. 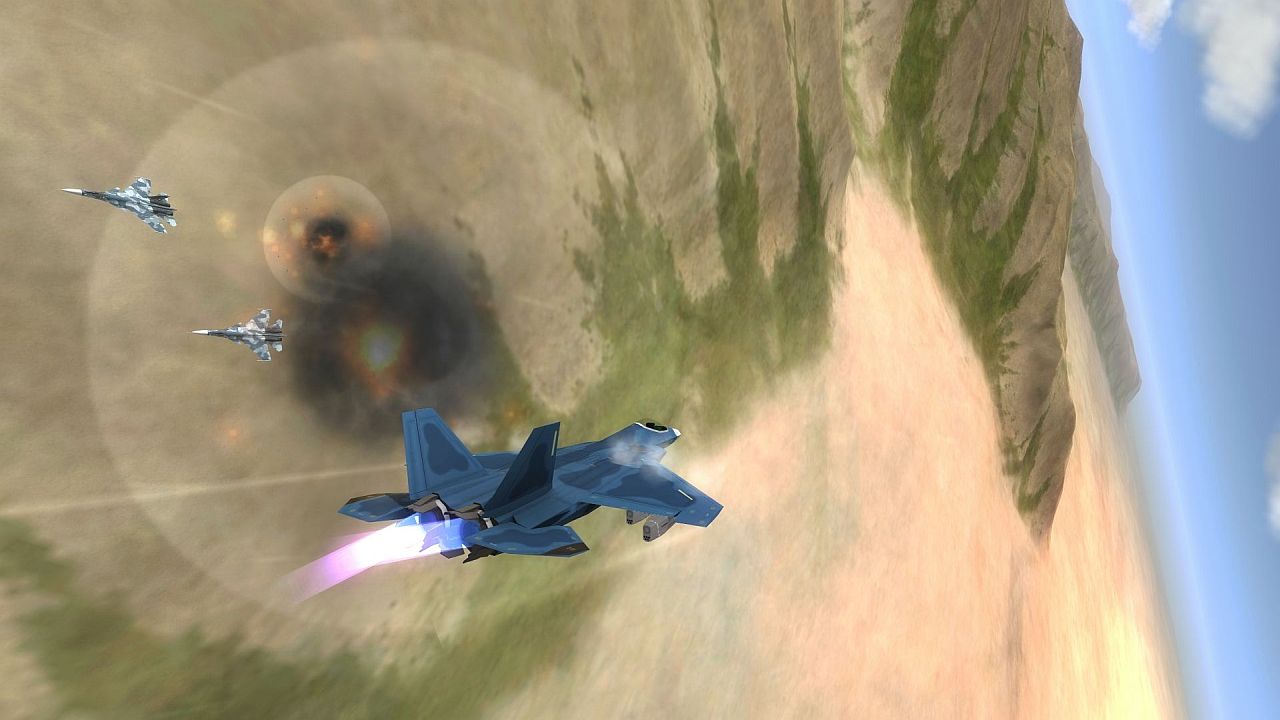 The game has been designed to produce an easy-to-access style of gameplay, as well as create a style of play suitable for a casual experience. Pitch and roll are controlled with the left thumb-stick, whilst the L and R buttons produce yaw. Weapons are assigned to the face buttons, with missiles launches governed by the A button, guns with B, target acquisition to Y and weapon selection with X. The right thumb-stick manipulates camera angles, whilst depressing it releases flares; whilst pressing the left thumb-stick disables the Alpha Limiter, causing your aircraft to perform tight and evasive manoeuvres. ZL and ZR control acceleration and deceleration accordingly.

Graphically, Vertical Strike, represents the most-realistic looking flight combat game presently available on the Switch, with accurate aircraft models and believable landscapes. Clouds and smoke trails are suitably impressive too, producing an aesthetic that is pleasing to play. However, the flight mechanics and weapon utilisation offer a more arcade approach to their execution. Missile launches dispatch a number of warheads towards the amount of targets that have been locked-on, much like Afterburner’s style of play, whilst distinguishing ground-levels can be difficult at the best of times, inadvertently leading to ground crashes as you fly too low; although the sea campaigns do fare better in this respect. There’s nothing particularly game-breaking here, but if you’re looking for a serious flight sim on the Nintendo Switch, you unfortunately, won’t find it here.

This is distinctly an arcade affair, with your only objective being how long you can survive. There’s no mission structure, levelling up or structure varieties; although you do encounter a boss-fight of sorts, although these are usually just a stronger form of warship and enemy fighter. It’s this mechanic that produces a simple, casual setting; making it a game that is best played in short bursts. There’s simply no depth here, apart from the limited selection of loadouts that are available to you. 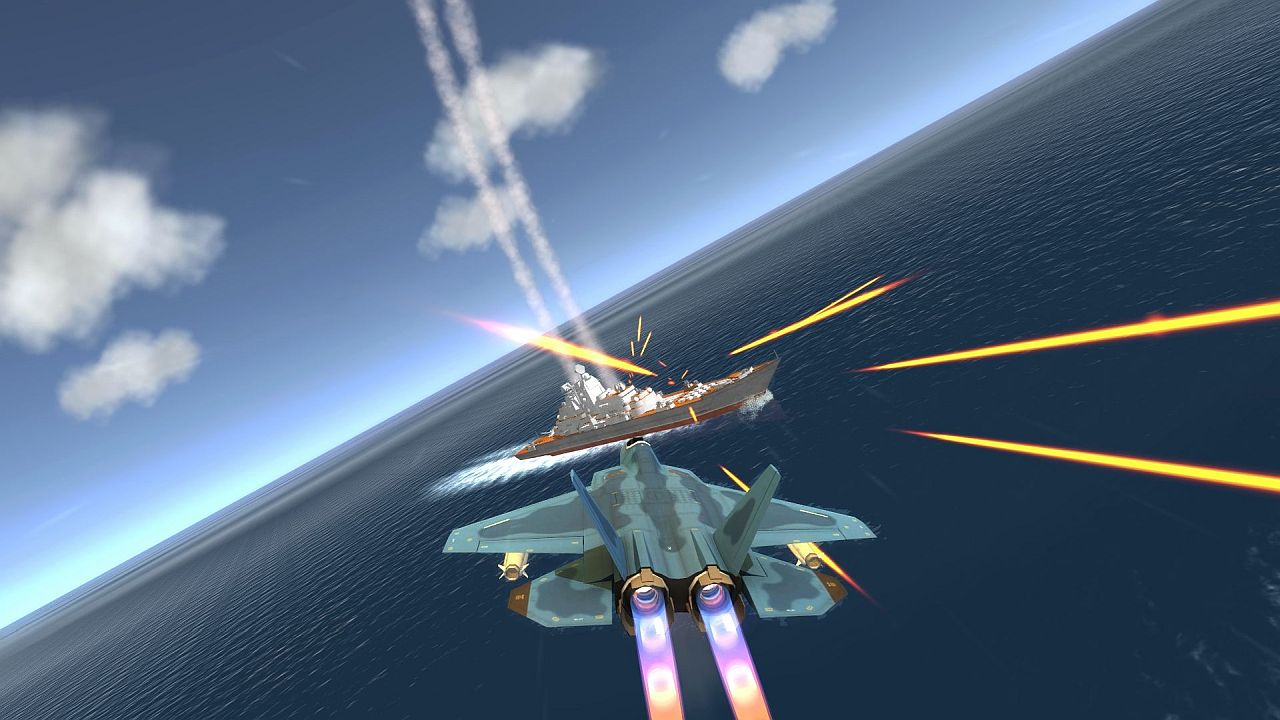 The combat is generally satisfying, offering an experience that is similar to early versions of the Ace Combat series of games. However, a few elements in the execution of the game do produce some puzzling aspects. For instance, especially in the anti-air campaign, enemy fighters seem to be controlled by kamikaze pilots, often flying their aircraft on a direct collision course with yours. It does provide a sense of urgency with a constant need to dodge, but at the same time also produces another level of unbelievability in an otherwise realistic looking setting. Enemy lock-ons can also be difficult to judge, as although the smoke trails from your own missiles are visibly clear, enemy warheads can be difficult to acquire; often leading to a blind guess of releasing flares and performing evasive actions.

Of the two modes available, the Anti-Ship campaign offers the better experience; containing both sea and air threats, better ground acquisition and a clearer vision of threats. However, due to the nature of the gameplay with its endless waves of enemies, it soon becomes a game that grows old quickly; thus the casual element of play in short bursts. It works very well in this setting, but if you’re looking for a deeper, more meaningful experience, then I’m afraid you’ll be deeply disappointed. Saying that though, as an arcade blaster to pass a spare five minutes, and with it’s pocket money price range, you can have some high-octane, adrenaline-fuelled fun with this title.

Overall, Vertical Strike isn’t a bad little game, it’s just not a particularly good one either. It’s a bit of a wasted opportunity really, as with more depth and structure, this could have been a stellar example of a flight combat game. Instead, it feels more like a tech demo than a fully fledged title, but I think the developers recognise this with a price range that fits accordingly. There is a lot of fun that can be had with this game, but as mentioned previously on more than one occasion, only in short bursts. The only mechanic within its gameplay options is to try to improve on your own personal bests, both in score and levels reached. Without any structure or online leaderboards, the game feels a bit flat and lonely sat within the confines of your cockpit. It may be limited, but it’s also cheap, which is its saving grace, as for the price, it’s definitely an arcade flight sim that’s worth checking out. Just don’t expect too much from it, or you’ll be left bitterly disappointed.