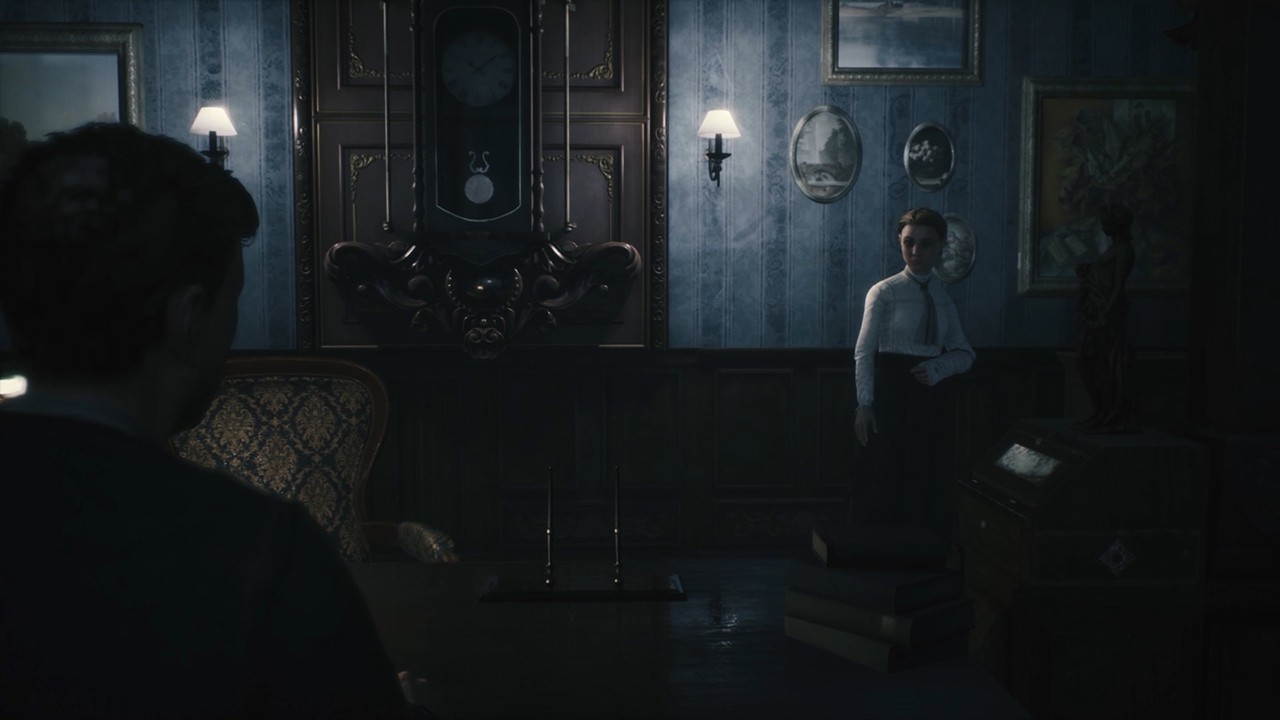 I get the need to try and publish a game that isn’t meant for the Switch on to the Switch. Nintendo’s console has the highest frigging market penetration right now, it’s on track to be the best selling Nintendo console ever. But not every game can be on the Switch. Yes, Bethesda and CD Projekt Red got some seemingly impossible games on here, but notice how quiet Rockstar has been. They put out LA Noire, which was a whopping 30 GB, ran very well, but ultimately it just wasn’t worth it to try and put out more titles. When a game is ported well, it’s applauded and lauded, because the devs went to the mat on it. When a game is a terrible port, however, it buries its own lead in shoddy framerates, constant bugs and load times from hell. As much as I really, really want to say this is an example of the former, Remothered: Broken Porcelain is a firm exhibit of the latter.

This feels borderline shocking if only because it seems like the developers, Stormind Games, received a lot of flack for how the first game performed and looked on the Switch. Remothered: Tormented Fathers was an oddly titled survival/psychological horror game from a couple years back that BonusStage gave a fair but weak review of with a PS4 copy. Now, since that time, there’s been plenty of opportunities to assess the pros and cons of the Nintendo Switch, and most devs have come to realise the little console is tough but it’s not a juggernaut. The feeling across the boards were “Remothered doesn’t run particularly well on the Switch and it feels quite buggy.” Still, there was a level of confidence with Stormind that the secondary title would do better, so Broken Porcelain went ahead, all gas and no brakes, into getting the game into the Nintendo player’s hands.

If you’ve never played the first one, Remothered: Broken Porcelain does give you a brief synopsis of what happened in Tormented Fathers, though it arguably only does a little to help clear things up. The first game stars a woman named Rosemary who is looking for a vanished girl named Celeste (who’s nickname is Jennifer due to some very creepy revelations) in order to calculate if it was just a normal disappearance or if it was a coverup for something far more horrific. There’s a whole bunch of stuff that occurs that involve a drug, some moths, heavy religious undertones, tons of murder, and some difficult family relationships. In the end, the only things we really understand is that the drug in question that supposedly erases memories and covers up PTSD leads to bad stuff, and that Celeste is probably still alive somewhere with vague hints as to where that could be. This whole thing is only vaguely important inasmuch as it directly sets up Broken Porcelain. 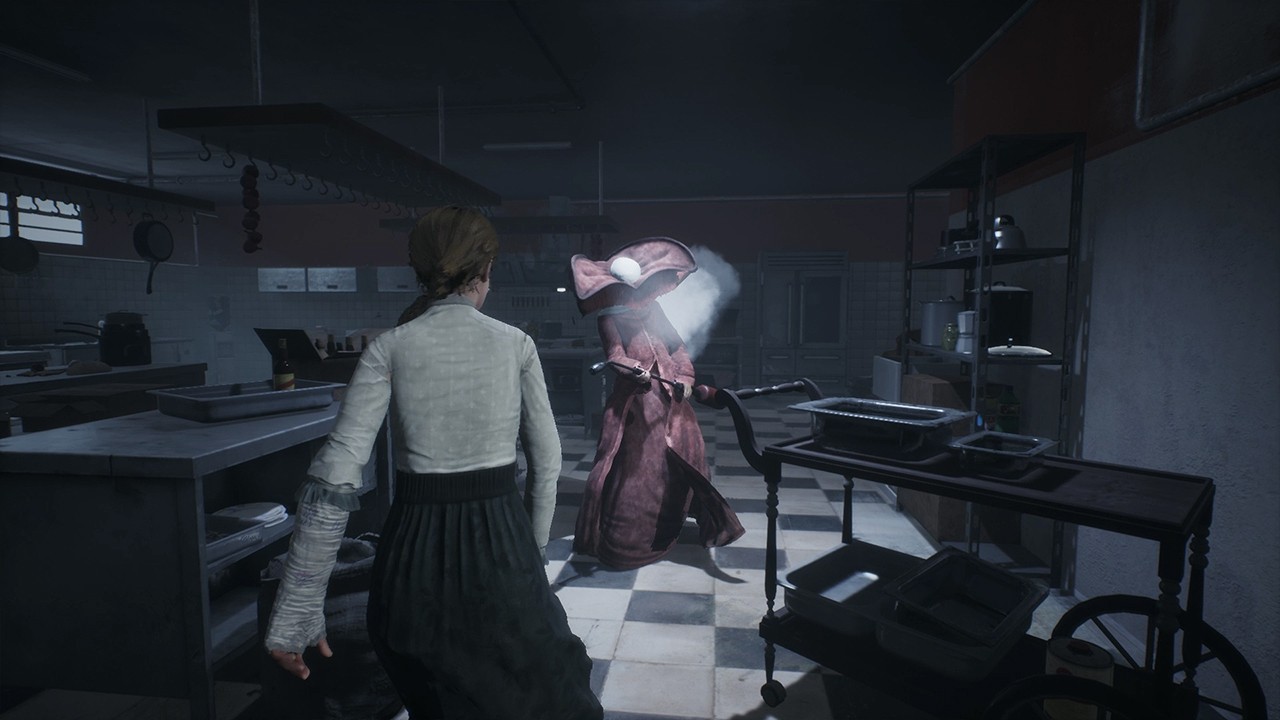 With Remothered: Broken Porcelain, you’re now in the role of Jennifer, who lives/works at Ashmann Inn, a remote hotel somewhere in time (as it turns out, the 1970s) and you know your story has to deal with the first game because we actively open on a commercial for the infamous drug, Phenoxyl, and then Jennifer shooting the tv with a nail gun. There’s an insane sequence where Jennifer is chased and finally stabbed to death by some dude, THEN the game officially starts. That’s one thing that’s always been a bit odd: the Remothered series purposely cuts and jumps around in some aspects of storytelling that can be incredibly disorienting. The effect, I feel, is to make players need to focus up and slowly piece things together to get the full tale, but I often just end up dizzy and check certain scripts in order to make sure I didn’t miss anything or get it confused. Anyways, Jennifer is scolded for being disruptive, gets told her best friend tried to get her transferred to another building, tries to clean up, but gets distracted by weird noises, and then finds a zombie hand that eats a live crow before her supervisor turns into a monster and tries to kill her. If that all seems very strange, it’s because it is, and the game never stops delivering oddball scenarios.

Remothered is a survival horror game from the 3rd person perspective, and the refrain is the survival part. Over the course of the game, you’ll have several moments where you’re basically being pursued by different entities and you need to find a way to get passed them, either through hiding, through triggering traps, through careful planning or through sheer dumb luck. Jennifer has a variety of items that she can pick up along the way that can serve as both distractions and also as melee weapons of sorts. It should be noted that most of the time the stalkers who are coming after you cannot be killed by conventional means. For example, the first adversary, a woman named Agatha, will constantly try and kill you with a pair of scissors. Even if you get the drop on her and stab her yourself, she will resurrect in a disturbing cutscene and then be in prime striking range to stab you. Every so often, the killer’s attempts give you QTE moments to help save you, but it doesn’t happen all the time. You need to explore the Inn, gather information through both the present day and flashbacks, and piece together a very, very convoluted story that will help explain some events from the first game and tie the whole franchise together in a satisfactory if not altogether enjoyable way.

I’ll preface this next part by saying that, if you were okay with Remothered: Tormented Father’s performance on the Nintendo Switch, then you’ll probably be alright with how Broken Porcelain does. You know that things aren’t how they should be compared to something like a good PC or a PS4, so there’s an arguable dip in quality and graphical display. That’s fine, I totally get that. Anyone who thinks Doom or Witcher 3 looks as good on Switch as another system is completely off their heads. If you NEED to get that story element, then you’ll eventually find it in here through a series of trials and errors. You may, however, need a walkthrough like I did to get to different places, not because the game is unclear in direction, but because it’s unclear in visually seeing where to go. 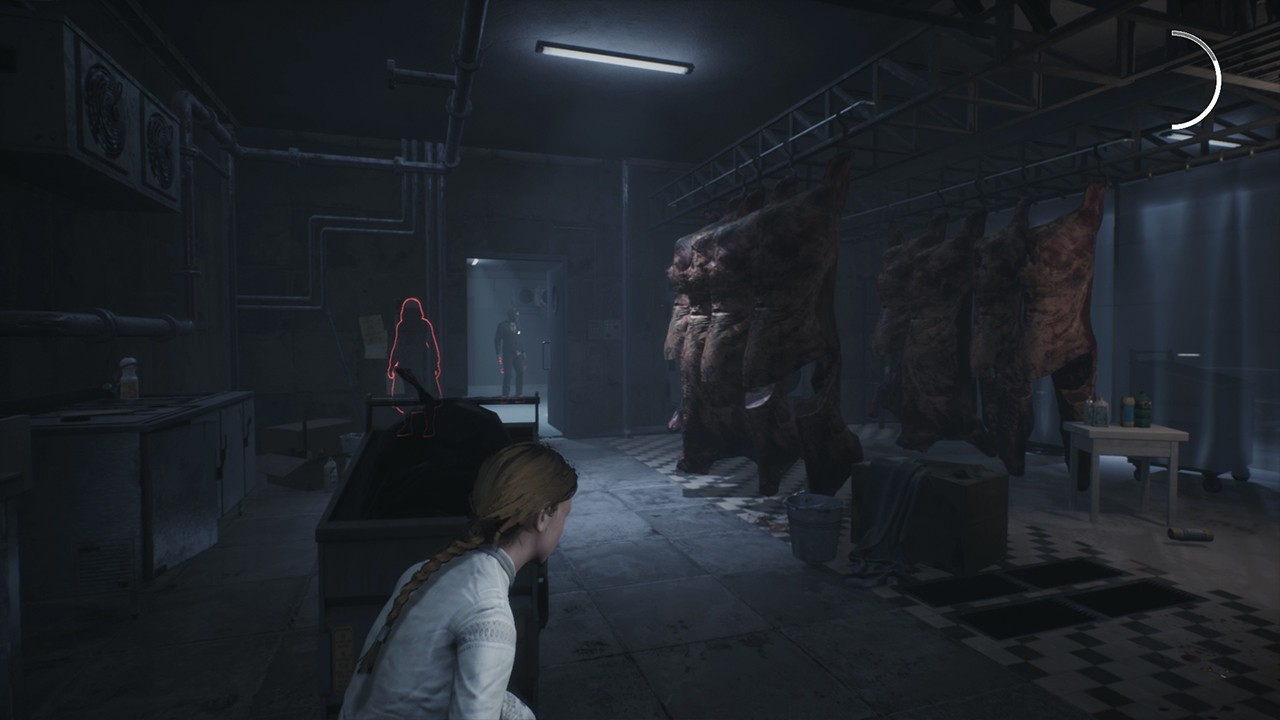 Broken Porcelain looks and plays like absolute garbage on the Nintendo Switch, and it’s even worse in handheld mode. Every single moment of gameplay that isn’t deliberately pre-rendered is straining to perform, and even some of the canned stuff is struggling. The best way I can describe it is if someone was streaming a PS2 horror game over Twitch but they were using a 56K modem to do so. The colours are all incredibly washed out and dull to the point where they became a detriment to the game. There were times where I couldn’t see where to turn or what was ahead/next to me due to the way the shadows and the angles were constantly shifting. The effort needed to basically decipher what was happening on my screen often overtook what I needed to actually do, so things like trying to combine items in my inventory or activate moth powers were superseded by the need to get to certain places so I could focus long enough to actually map out, in my mind, how to do what I wanted to do later on. Does that make sense? It’d be like needing to step out into the hall to get your homework from your backpack because your classroom is so chaotic that you can’t focus enough for this simple task.

Plus, beyond the graphical moments, Remothered: Broken Porcelain is buggy as hell. The fact that there was already a performance patch by the time I got this game that helped “when players lost control of Jennifer” is insane, and that I am currently holding the “best” version of the Switch port so far. Your camera will force you into walls and blind you during a survival horror game. Characters will arbitrarily stop moving their mouths when speaking, or their hair will suddenly fly about wildly as though a ghost were playing with it. The AI becomes very arbitrary with their ability to sense where you are and to care about you or not. There were a couple of times I died and then respawned near where the stalker was, and they would walk right past me because I hadn’t triggered a certain checkpoint yet and thus did not exist. Some of the bugs are good: Jennifer never tires when running despite the stamina gauge being empty, so I can just windsprint the whole game without worrying too much. Some are absolutely hilarious, like when I died because Agatha stabbed the air a good two feet away from my head and that caused me to die. If it wasn’t so goddamn frustrating it would actually be really funny to see this game in action, but I clocked it: loading a game after death or going into a new area takes a full minute in many cases. That doesn’t seem like a lot, but go ahead and time when most of your games display loading screens. I think you’ll find it’s a few seconds at most. I have the Switch so I can game on the go, and time is very important to me. Why on earth would I invest in a dark, visually unappealing, broken and confusing game that takes a minute to load so I can die in fifteen seconds?

The part that rankles me the most about Remothered: Broken Porcelain is the abject dishonesty of it all. When you load the game, there is a pre rendered model of Jennifer on the title screen that looks gorgeous. She’s moving in some very set motions, ranging emotions and facial tics, and it made me excited. Even a bad horror game can be fun if it looks good. But that was the expensive spinners on the beat up car. There’s nothing like that anywhere in this game. It’s bait and switch, and players should feel incredibly upset about that. This horror game delivers on story only, and even that is a labyrinthian mess that you’ll need a flow chart and Charlie Day to fully figure out. If you’re determined to follow the story of Remothered, consider getting it on a different platform: I can’t speak to how it performs there, but trailers indicate it at least looks better. As for the Switch port, it doesn’t need to be Remothered, it needs to be rehomed.

Those screenshots in the review are from the press kit and in no way reflect what Remothered looks like on the Switch. You have been warned.