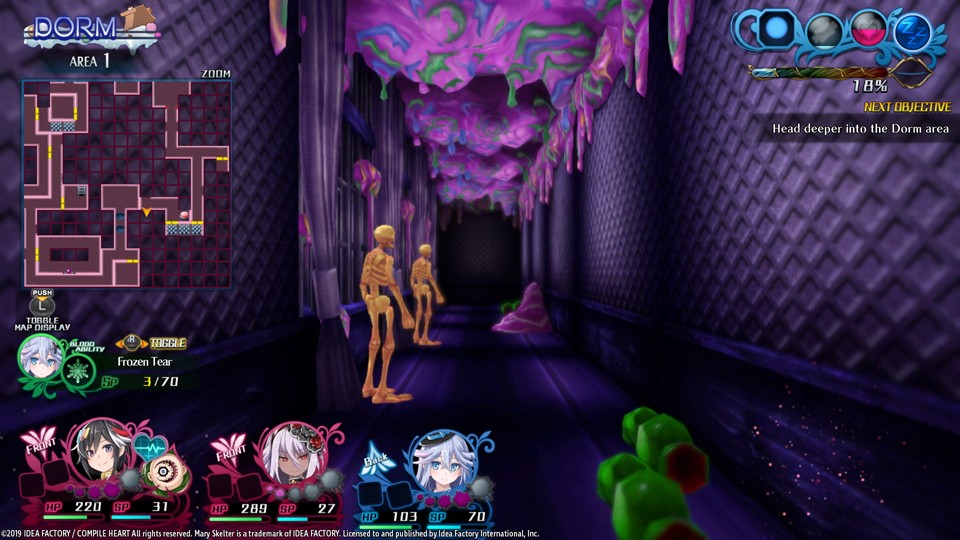 With Halloween fast approaching, it makes sense that companies and publishers are working overtime to make sure they put out titles that best appeal to the scary gamer inside all of us. Thankfully, this year is empty of the Five Nights at Freddys clones and random jumpscare imitations (though I’m sure there’s probably a few lurking somewhere), and, instead, we’re being treated to some top quality, if questionable, titles. Idea Factory and COMPILE HEART always manage to bring something to the table that I’m intrigued by, either by wacky premise, cute protagonists or unique battle elements. The team, interestingly, has managed to combine all three ideas and bring them to the Nintendo Switch in a package that should hook many players, especially once it’s revealed that this sequel doesn’t need you to play the original to enjoy it. Welcome to the demented, dark world of Mary Skelter 2.

Despite the title, you don’t need to have played the original Mary Skelter: Nightmares in order to enjoy this piece (though you have the option to do so later on). Mary Skelter 2 is an alternate reality perspective of the first game, where we’re put in the shoes of Otsuu, a Blood Maiden who is trying to help everyone out of Jail. To catch you up to speed: some time ago (hundreds of years, I believe), a menacing, evil tower suddenly shot out of the ground in Japan, and rapidly transformed the world around Tokyo into a hellscape labyrinth, where the citizens were unable to escape and were constantly being tortured by demonic creatures called Marchens. Over time, the name Japan was lost, and the horrific land was simply dubbed Jail, as everyone who lived there was a veritable prisoner. The Blood Maidens are young women who have been born with a special trait: when exposed to the blood of the Marchens, they become incredibly powerful and can fight back against them, and thus they band together underneath storybook pseudonyms (the first two Blood Maidens we meet are called Red Riding Hood and Little Mermaid). Otsuu is attempting to find a “new” Blood Maiden when they encounter Jack and Alice, who were the protagonists from the original game. However, things change quickly as Alice appears to go a bit off the rails and transform into something new, strong, and totally insane. Jack, on the other hand, is transformed into a Nightmare – a Marchen which is insanely strong and usually spells doom. Jack seems to maintain some degree of cognition, and decides to join Otsuu to try and help Alice, as well as work towards some kind of happy ending for everyone trapped in Jail.

It should be noted, right from the beginning, that Mary Skelter 2 differs a bit in tonality from a lot of other Idea Factory games, and that might put some players off, so the warning comes right up front. While you might get a dark chuckle every now and then, the tone, conversations and overall atmosphere of Jail is far removed from the hilarious banter that we encountered in Neptunia games, Fairy Fencer F or even Moero Chronicles. While I would hardly chalk the banter up as “depressing” or anything to that extreme, the fact remains that humanity is under the thumb of evil overlords, the heroes are not in the best spot, and everything is a post-apocalyptic nightmare. There’s still a bit to lighten the mood in terms of side game efforts (room design and relationship building with characters, “licking” in battle to activate extra abilities), but it’s just not the mildly inappropriate tonality that I normally enjoy from Idea Factory, so keep that in mind as you move forward with the game, should you choose to. 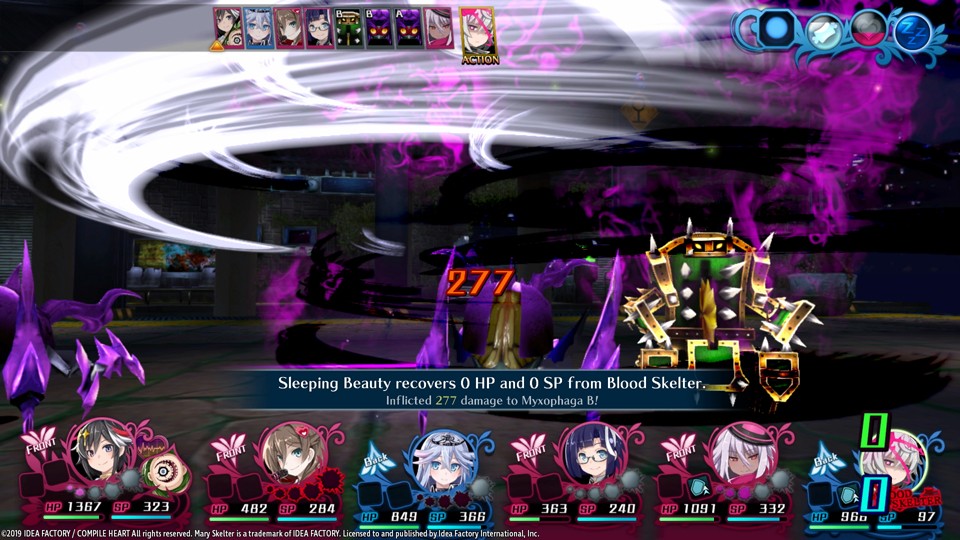 Now, in terms of actual gameplay, Mary Skelter 2 is a first person dungeon crawler, same as Moero Chronicles, with its own set of enjoyment and difficulty to shape the crawl to a player’s delight. There’s plenty of equipment to be bought from the HQ once you get out of a Jail dungeon, and there’s also loot to find, as well as upgrading the aforementioned loot through Blood. Blood is a massive part of the game, but don’t mistake Mary Skelter 2 as overtly gory. The blood we see is bright pink, and it’s an essential part to the Blood Maidens, who enter a transformation called Massacre Mode when they’ve been sprayed with enough blood from enemies. The Massacre Mode is a gamechanger, allowing for a temporary boost in stats that could be a deathblow to larger enemies. You can delay the Massacre Mode by licking blood off each other (yes, that’s actually a thing) and licking then triggers certain spells and effects, such as a temporary shield around everyone, or raising the agility of whomever did the licking. Oh, and you can do the usual deal, like attack, defend, cast spells, and take a deep breath so you don’t murder everyone.

The inclusion of Jack as a Nightmare character in Mary Skelter 2 is a fun addition to the roster and requires players to do extra strategizing during battle. Jack will slowly get worked up during a fight, and it’s up to you to decide if you want to calm him down or let him become Ripper Jack – a full fledged psychotic break for Jack that can damage enemies or allies. It’s a gamble that can seriously help in later, larger fights, though allowing Ripper Jack out too many times in one battle is an instant game over. For a majority of the game, you’ll want to just keep Jack calm and let Otsuu take a breather so Jack can collect himself to prevent the rampage. It’s a cool extra bit, and it helps keep the old school protagonist front and center during the game, but it’s also a bit of extra work that honestly isn’t needed depending on how you choose to play the game.

Mary Skelter 2 also boasts a Job system that doesn’t need to be explained but should definitely be explored. Besides allowing for characters to unlock additional costumes (which can then be seen in the gallery), it gives you a better range for how you can play your game, and gives better customization on skill sets that can really boost your success rate for certain boss fights. There’s nothing completely insane: given that Little Mermaid is more of the mage/healer character in her personality, you can’t just magically turn her into a berserker, but you can still attune her to a more combative spellcaster if that’s your thing. The Jobs do require a bit of grinding and exploration to fully unlock (you need to score Job points to get new positions available), so the completionists out there will have plenty to do, especially if they want to get some of the super-secret jobs that Alice “previews” for us during her grand entrance. 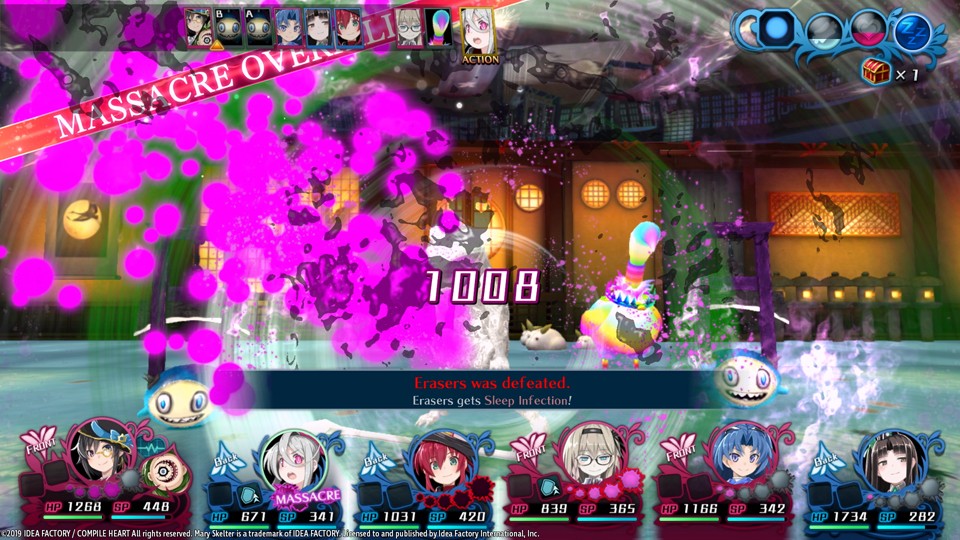 When it comes to layout and design, the mazes of the Jails of Mary Skelter 2 are easy enough to follow when the game is under normal circumstances, though you often find yourself backtracking to put together the exit that’s never straightforward. There are quite a few traps strewn about, some that you have to time and run through if you don’t want to lose all your health, and it can seriously affect your performance in random battles if you’ve just gotten winged by a spiked mine cart. The Blood Maidens each have different abilities that present themselves in the crawl, and these abilities means a different path depending on who is along for the ride. For example, Little Mermaid can summon water projectiles, which can extinguish flame traps and trigger explosive targets. Otsuu can produce massive wicker balls, serving the dual purpose of filling in conveniently sized holes in the floor and slowing down Nightmares who’re chasing you. When a Nightmare ends up chasing you, it’s one of the few times that the “horror” aspect of the game really takes form. The Nightmares, by and large, are much stronger than you, and failure to get away means getting murdered where you stand. Worse, you get slowed down by enemy encounters, and occasionally need to engage directly with the Nightmare and try to stun them so you can get away. The whole dungeon is awash in white fog at this time (called the White Darkness), and, with a higher difficulty, you actually lose the mini map, so the sense of disoriented panic is real and loads of fun. And, trust me, you’ll want to keep the difficulty at least on normal.

As much as I love Idea Factory games, it’s a constant battle to not put their games on easier difficulty settings, and Mary Skelter 2 is no exception. If you choose to drop your game down to Easy, the entire thing just becomes an exercise in hitting buttons. All you need to care about is not running out of Hard Tack while you mindlessly smash the attack button and move forward, and the mini map is present during Nightmares, so the fun is gone. At normal, you need to start strategizing about elemental weaknesses fairly quickly, and the need to escape becomes all the more pressing. And the Fear Difficulty…woof. You certainly will want to save it for a second playthrough. If you’re just interested to see what happens with the characters and how the future of Jail will play out for Otsuu, Alice and the rest, keep it on Easy, but you’ll probably ace the whole thing with minimal effort.

With great character sprites and some pretty superb voice talent in both English and Japanese, Mary Skelter 2 is a solid title on the Switch for fans who want the first person dungeon crawl experience with an anime tone throughout. The performance is decent: the battles and cutscenes have zero issues, and there’s just a small bit of lag when wall textures and traps start to pile on top of each other, but it never caused problems with the actual gameplay. My very early gripes with the lack of save points for the first Jail were washed away by Jack’s “Rabbit Hole” ability, creating a portable save point and exit that can be carefully used to make the most out of your crawl.  There’s a ton to explore, many fan-based goodies to unlock (the inclusion of the first game is just a class act move), and the asking price is fairly reasonable. Just make sure you’ve got enough room on your card: clocking in at 10.4GB, this massive dungeon takes up massive memory.

Mary Skelter 2 is a more mature, engaging dungeon crawl from Idea Factory, but it still keeps a weird and fun nature that keeps it interesting and fan friendly.