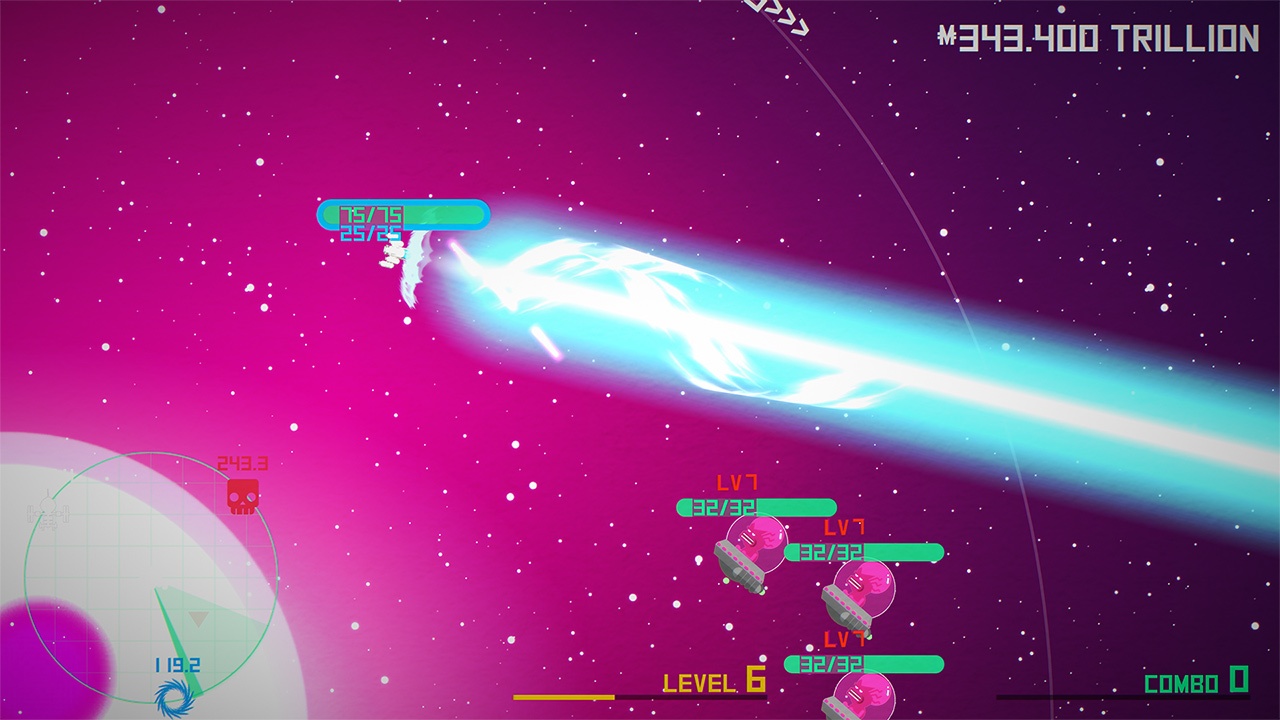 We’ve all been there. Every so often we’ll stumble across a game which is an absolute time sink! It may not be your favorite game of all time, yet there’s something about it that encourages you to pump in days worth of play time. For me, the most addictive games are the ones that have a creative aspect (Minecraft, Terraria), a management or farming aspect (Football Manager, Harvest Moon) or a mix of the two (Sim City, Theme Park, Stardew Valley).

The developers of ‘Vostok Inc.’ describe it as twin stick shooter with a side of business management. Personally I feel as if it’s the other way around. Although I do get involved with the twin stick combat, I view that aspect as a means to an end with the primary focus being on making huge investments and gathering money as fast as I can.

In a brief summary, ‘Vostok Inc.’ is a game where you develop your own intergalactic corporation. You travel from planet to planet, building industrial and commercial properties that will generate you income. With each solar system you travel to you’ll encounter opposition in the form of hostile alien races or rival companies. As such there will always be something trying to attack you as you go about your business. This isn’t an issue as not only is the twin stick combat a welcome bit of action between investments, but destroyed ships also drop useful cargo such as crew members, gifts, or a bit of extra capital.

That’s how the game works in a nutshell, however in order to grow a successful business there are quite a few mechanics that you’ll need to get to grips with. My first few hours of playing mainly consisted of buying cheap industrial units and having dogfights with the locals in my humble spacecraft. However, after some experimenting I discovered the benefit of hiring management. 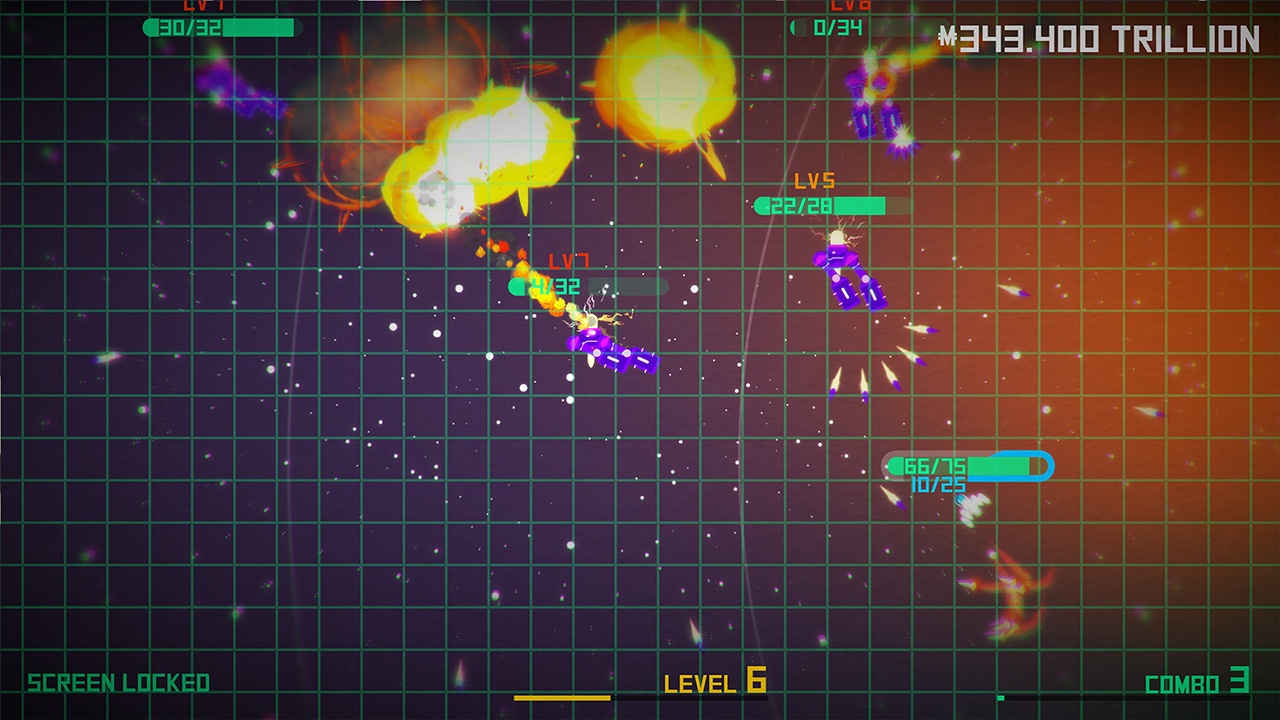 As you fly around the galaxy you’ll soon discover people floating around helpless in midair. Rescue them and they will either invest a large sum to your company or work for you in a management role. Every middle manager you hire with increase your income by a steady 3%. They require no incentives to work, however should your ship get destroyed you will lose them all in the process. Upper managers can add a higher bonus percentage to your income and will stick with you throughout the game, however higher rewards require higher maintenance as you’ll need to regularly offer them perks such as gifts to keep them working hard. In a clever piece of game design, each upper manage is represented by a Tamagotchi, and that is effectively what they are. As a bonus, each Tamagotchi also includes a small mini game to play which can earn you extra perks.

Once you begin to earn money it’s important to invest it, but it also helps to spend some of it upgrading your ship. Your weapons, shields, thrusters and radar can all be upgraded via a space station. You can also buy other perks like increasing the amount of gold dropped by enemies that you destroy. The weapon system is actually quite clever as there are three different types of guns you can buy to fill three weapon slots. However, mixing the various guns actually creates entirely new weapons. This creates a total of 19 different weapons to choose from through a system of customisation.

Progression is measured in a number of different ways. When you begin you only have access to one solar system and can only build a few different unit types. In order to branch out you’ll have to complete a few objectives. Each solar system contains a boss fight that can only be accessed once you’ve accumulated a specific sum of money. By beating the boss you’ll gain access to another solar system and will be free to build on all the planets within. To unlock more profitable building types you have to complete various other tasks such as destroying x amounts of enemy ships, winning races, unlocking cargo crates. There is quite a variety of things to do.

A good head for figures is very beneficial. The units you buy all offer constant revenue, however if you continue to buy the same type of unit on a single planet they will steadily become more expensive. As such you have to be the judge on where the breaking point is when buying certain properties becomes counterproductive. As this is the case it helps to spread your investments across as many planets as you have available. It also helps to study the various upgrades you can buy to work out which ones will be the most profitable.

Vostok Inc. may not be the most stunning game as far as presentation goes, but the graphics and sound are all serviceable and do the job. I would describe the quality of the graphics to be that of a high end mobile game, having said that ultra realistic graphics wouldn’t add a whole lot of value to this type of game anyway.

The music is fairly decent. It’s simple synthesized background music that I wouldn’t want to listen to outside of the game, but it doesn’t distract and helps me stay focused on the job in hand. It is possible to play around with the music in the sound menu as you can play tracks back and toggle each instrument / sound layer on and off. The only sounds that I find obnoxious are the simulated speech noises that play every time your business partner randomly pops up (which happens way too often).

I was able to jump right into this game with no issues at all. All the menus are clearly laid out, making purchases and studying your income is very easy to do. There is a tutorial character that explains the basics as you play, but I didn’t rely too heavily on him. The controls are comfortable. Being a game set in space I was worried that there would be low gravity physics that would make the twin stick combat difficult. Fortunately this isn’t the case and although the ships do have a small amount of momentum behind them, I feel as if this game controls very well. 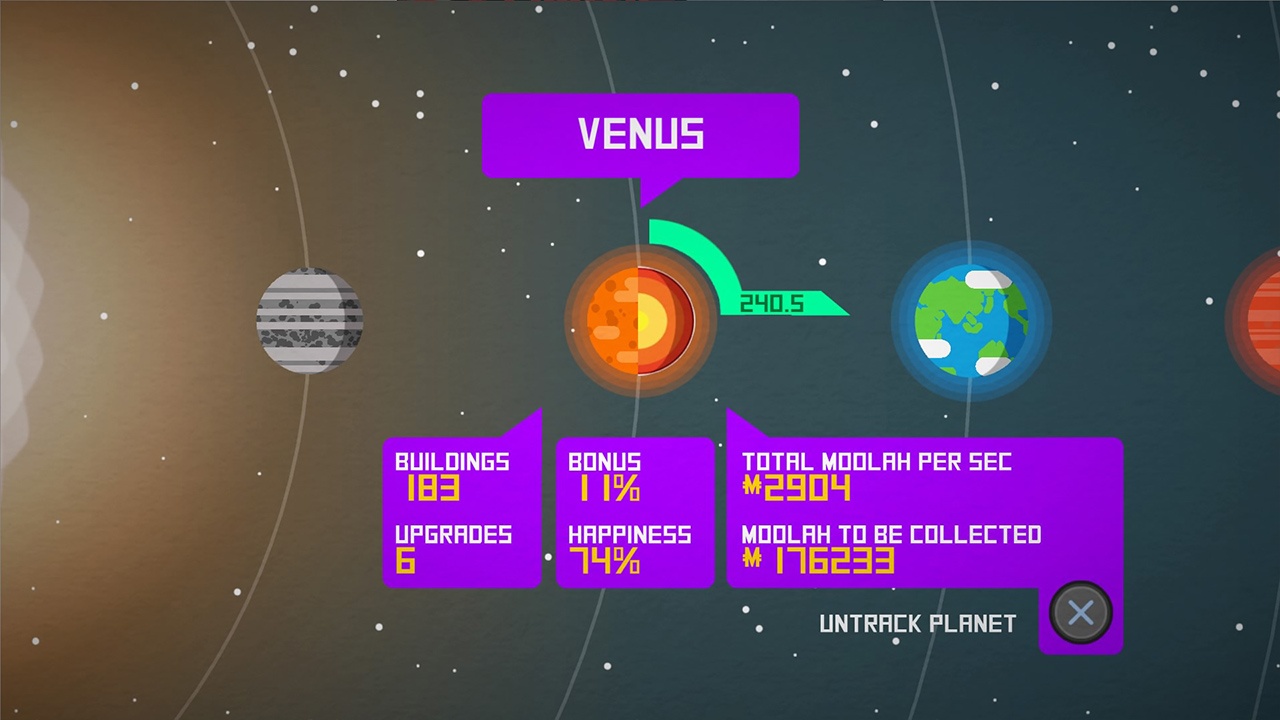 As much as I’m loving this game I have encountered a few minor issues. One thing I found a bit annoying is how fragile your ship can be in certain situations. For example, in battle there doesn’t appear to be any recovery time after you take a hit. As a result there are situations where you can get sandwiched between two enemies, end up bouncing between them and die instantly regardless of how many times you’ve upgraded your shields. This is a shame as whenever I enter a battle, regardless of how overpowered my ship is at the time, I’m never confident that it won’t end up going badly.

Something amusing I discovered early on is an exploit that I can’t get over. The way the system works is that you earn money every second, however you do not need to by flying around or engaged in combat to be earning money. You will still rack up an income even if you’ve landed on a planet or if you are navigating the menus. As such there is nothing stopping you from playing this game all night and instead of turning it off when you’re finished, just pause it, go to bed and when you wake up you’ll have a ton of extra cash to spend. The only downside is that your upper management will start getting stroppy as you won’t be giving them regular gifts, but this doesn’t take long to rectify when you come back. I’ll be honest, I’ve gone to work twice this week and left my PS4 on at home raking in money.

On the whole this isn’t a very difficult game. You’ll make progress faster depending on how good you are, but it’s not a game that requires a great deal of skill to enjoy. It’s a great game if you want to relax and catch up on podcasts or listen to the radio as it isn’t particularly taxing mentally.

I’m having a lot of fun with Vostok Inc. I would like to see this game expanded on in future as I think there is room for improvement. For example, every planet in this game is the same aside from names and cosmetic appearance. They all have the same units available and the same pricing structure. I think it would be great to see a more progressive system where certain properties are more valuable in certain regions, or events where planets require maintenance or defense from hostile takeovers, etc. It’s a good game as it stands, but with a bit of extra work it has the potential to become a great game. I’ll be keeping my fingers crossed for a Vostok Inc. 2, however until that time I can certainly recommend giving this game a try for yourself.

It’s a good game as it stands, but with a bit of extra work it has the potential to become a great game and I can certainly recommend giving this game a try for yourself.