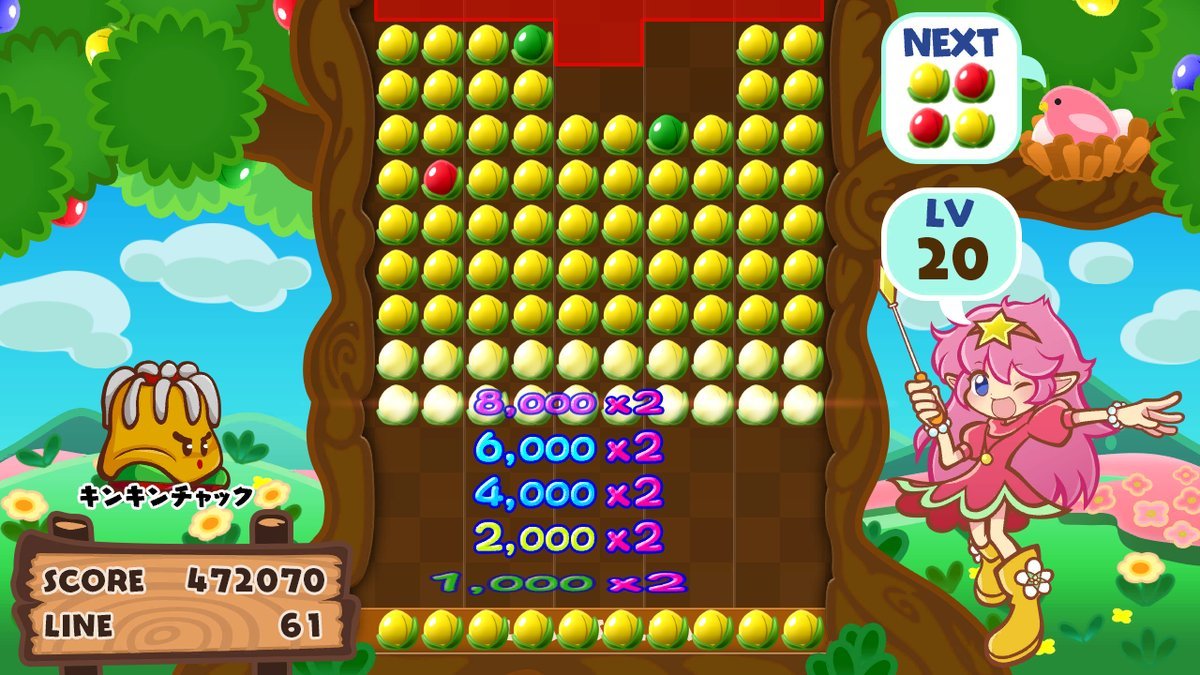 There was a bit of fanfare being thrown around when it was announced that Soldam was coming to the Nintendo Switch. SNK has had a bit of success with its NEO GEO releases, showing that people really enjoy having a classic experience on a new console, and puzzle games, in general, have a good spot for a lot of casual and serious players. In recent weeks, I have played and reviewed quite a few, and most seem to have a pretty definitive place for how they can appeal to players and keep replay value going. After all, puzzlers, by their very nature, need to have some kind of hook that keep you coming back time and again. Soldam, apparently, was very big in the 90s, being touted as “the original match game”, and seemed to be a hotbed of cute anime characters paired with combo mechanics. It felt like it could go against PuyoPuyo, and maybe that was one of the reasons why I ended up not liking it very much.

The mechanic for Soldam is pretty simple: you have a cluster of four berries of differing colors that you guide from the top of the screen. Get all of the same color in a full row, that row disappears and you live another day. If you flank one color with another color, that berry will change colors: that is to say, it’s like if Othello was a bit more fast paced and had a much bigger color complexity. But flanking is only successful if the invading color is on the right side of the screen: dropping onto the left often results in no changes unless you create a diagonal that is moving in from the right. 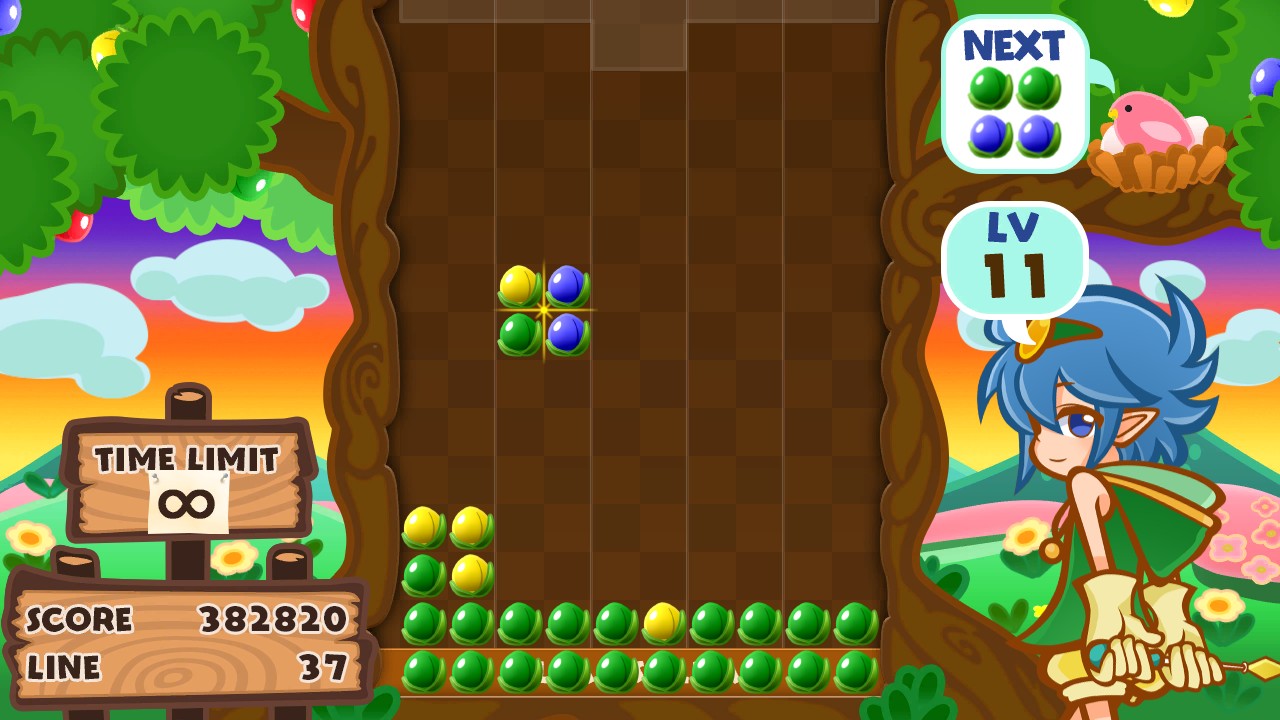 I gotta cut straight to the point: Soldam has a harsh and abnormal learning curve. Anyone who’s played any variation of puzzle game (Tetris, Puzzle Fighter) will be inclined to try and set themselves up to create blanket drops so that you can clear lines as they come, and possibly have a multi-level clear with the right four berry combination. This type of approach will maybe get you to level ten, max, before you’re overcome by the introduction of a third color (you’ll only have two colors at first) and then you crap out incredibly fast. Instead, you need to start building along the sides, usually making mountainous towers, and hope that you can come at the lower land lines with diagonals and uncommon setups, hoping for that perfect flank to set off a massive combo. It wasn’t…it wasn’t fun to figure out. I actually got incredibly frustrated, and even rewatched the tutorial slideshow a couple of times in order to confirm that I wasn’t playing the game totally wrong.

On the plus side of things, Soldam, if it’s your cup of tea, has a lot going for it. There’s a traditional single player mode, an “easy mode” that sets the pace and color variety much lower, and a two player mode that allows you to attack friends and family. The two player mode functioned as you’d imagine, with head-to-head puzzling that cursed your opponent with extra berries when you pull off good combos. There’s also a cute little bestiary that keeps track of all the little slimy guys you unlock during the single player mode. They’re basically the tree spirits that you feed berries to, and they change form depending on the color and frequency they get fed. It’s a nice little aside, nothing groundbreaking but still sweet.

Graphically, Soldam is also a huge step up from the original 90s release. If you find video or photos online, you’ll see the arcade version of Soldam was trying to marry anime characters and really early 32bit art, along with some clunky berry sprites (think Dr. Robotnik’s Mean Bean Machine meets the cast of Magical Drop). In contrast, Soldam for the Switch is highly polished and pops with a lot of bright pastels and well designed templates. The music is also a saccharine, catchy setup that is perfectly meant for an endless puzzle game. I can’t fault the developers for what they wanted to do in order to bring this game to the new generation, and I think they succeeded in creating a better framework and vessel for delivery. 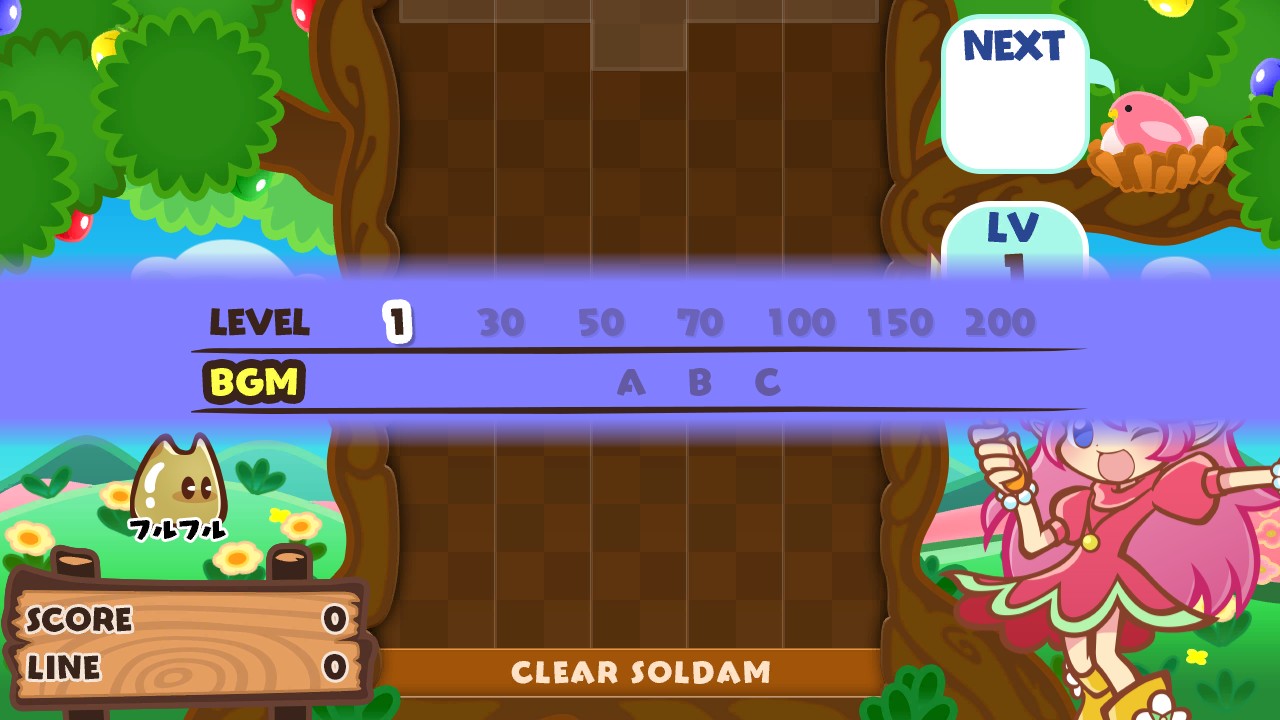 What I still don’t like, however, is the game itself. I’m not a massive puzzle person, but I’ve played my fair share of titles, from monochrome Tetris to Columns on my Game Gear and several titles on the Switch already. What you’re left with is an odd duck that doesn’t really seem to have one place or another. If it was meant to appeal strictly to the people who have nostalgic connection to their arcade days, they could have made a port of the original and kept everything rough but beloved intact. If they want to only appeal to new puzzle players, the overall aesthetic works, but the core mechanic is really bizarre and I don’t think translates well to home console at all. I can literally think of six other puzzle games that are currently available which all have a much easier entrance threshold on the game itself and a higher payout in terms of mastery and expertise. I can understand that not every game is for every person, but I’m just having a hard time imaging who this is for.

Soldam is still a well made puzzle game, regardless of my own personal interest in it, and I cannot fault how it handles, how it looks or how it performs, only my own enjoyment of the title. If you are a puzzlehead and just need to find a new fix that’s less constrained and more free-form, then Soldam could easily be the game for you. If you’re eager to see what a smashing success in 1992’s Japanese arcade scene looked like, feel free to give it a try. However, I don’t think the prominent elf ass will be unlockable in this version of the game. If that’s a deal breaker for you, Soldam may need to wait on your “to buy” list.