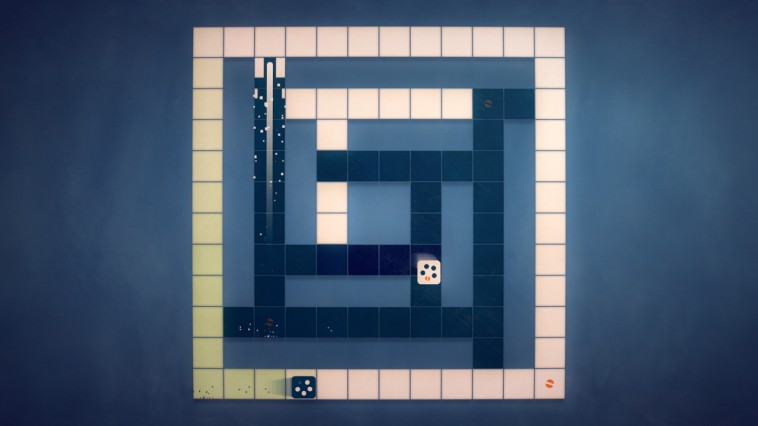 The great masters often take time to go back and test themselves to perfect the simple. A lot of artists will challenge to make a perfect circle by freehand, not because a circle is complicated, but because anyone can do it, but a well done circle still draws attention. In this vein, being able to make a shooting game, especially a competitive shooter, with almost no graphics to speak of, is a delightful concept that needs to be executed to a T. And that brings us to Inversus Deluxe.

There is no story to speak of, so RPG fans can get off at this stop. You are a cube. You can shoot bullets that also turn the surrounding panels to your color. You can only move on your color, and there is another cube (either black or white, depending on you) who can shoot back. First person to get shot loses. That’s seriously it. You have six bullets that you can fire in four directions, and they slowly recharge over time, though at a scaled rate. If you only fire one, your sixth bullet recharges quite quickly. However, if you shoot all six, it seems to take eternity for the first shot to recover, and the subsequent ones are each a little faster. During this refractory period, your opponent is absolutely trying his best to shoot your face off. Lather, rinse, repeat. If this seems far too simple and potentially boring, let’s delve a little deeper into what makes Inversus Deluxe simply amazing.

Firstly, the maps are all well laid out and unique despite only being in two noticeable tones (black and white). They’re carefully segmented and divided so that there’s much more than simply running and gunning in order to make the kill. With random islands placed to create impasses and small corners to hide, you get a chance to plan things out and really make it more Spy vs. Spy instead of just a shootfest. The maps also play out like PacMan levels, with infinite looping between the top and bottom, left to right. It really forces you to think outside the box in terms of offense and defense, and you’d be surprise how many times people think they’re safe just because they’re far away from you, and you simply loop your shot around and make the kill. 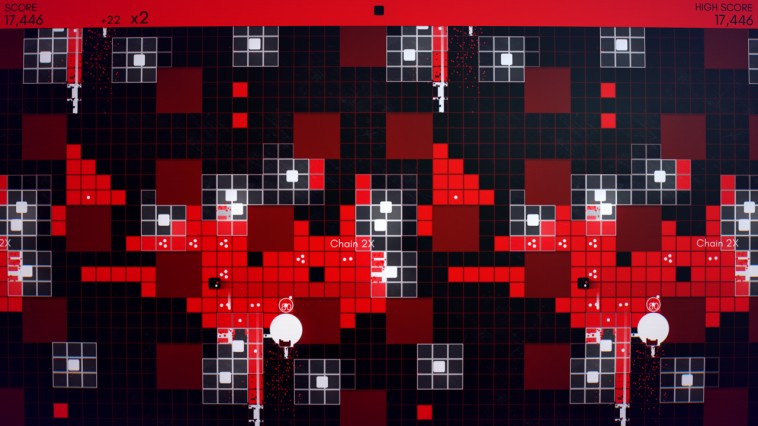 Additionally, there’s such a diversity in how the game plays itself out. With Inversus, the match really depends on who’s playing it. Two inexperienced players may turn it into a frantic barrage of shots, each one just barely missing each other or, even better, colliding in midair and saving both their lives. Once you get more into the style, however, you learn to pace yourself, and you follow a wavelength of cat and mouse, followed by multiple shots, and then maybe a retreat.  With the Deluxe version, there’s also two potential power up shots, the triple shot and the split shot (triple was available in the original version). While the triple shot is exactly how it sounds, the split shot, which is a little tricky to control at first, is a “round the corner” bullet that can be controlled to an extent, creating dramatic and insane new potential for planning and execution of, well, executions.

The arcade mode of single player does hold up well on it’s own, as you basically see how long you can survive against waves of red and white cubes, with the former being like zombies and the latter shooting at you. If you truly want to hone your Inversus Deluxe skills, there are a large number of maps in arcade to keep things fresh, and figuring out how to deal with multiple, strong CPU players will get you ready for the online competition scene. The arcade mode is also the easiest way to level up and unlock more cosmetics, such as color scheme swaps and different emoji to throw up between matches. Since this isn’t the type of game to invest in voice chat or anything like that, the emojis, though simple, are a nice touch to convey your disbelief or incredulity of how the previous match went, and it’s universal enough that you can use them against players all over the world.

Speaking of online, I was incredibly pleased with how quickly I was able to match up to someone on the Switch despite the game not even being out officially yet. Other reviewers seem pretty excited and I was able to match in both one-on-one and two-on-two. One-on-one is the most exciting, in my opinion, being able to focus on just one player and really creating some great tension and strategy. Doubles was borderline chaotic, with bullets flying everywhere and me needing to keep an eye on three players at once because, although I didn’t catch any friendly fire, you don’t want to run in front of a bullet meant for your teammate which you both could have dodged. Regardless, it was incredible fun, and the concept is so easy to grasp that people can jump onto this bandwagon at any time. 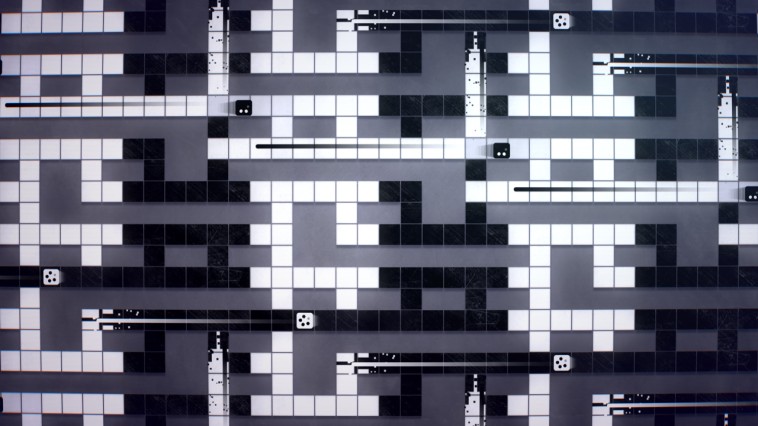 Lastly, this is a solid indie title to come to the Nintendo Switch. Inversus Deluxe is not demanding for graphics or performance, and controls well in handheld mode. Since the playfield is 3rd person overhead regardless, I didn’t lose any real estate or perspective from having two players crowded around the Switch, and I would actually love to get four and see how that plays out. The big screen is still going to be best for more than two players, but Inversus Deluxe actually is quite plausible with the small screen. It was akin to when I played Inversus a few years back on a small laptop and was enthralled with how well I could still keep track of myself. It’s that kind of experience, but with a much sharper screen and not being restrained by a terrible battery life.

This is an insane week for Switch titles to drop. Between FIFA 18, Golf Story, Conga Master Party and several others, this is buyer’s choice for what looks appealing and what can wait till later. If you are interested at all in having a great, highly replayable arcade game with an even stronger multiplayer appeal, I highly suggest grabbing Inversus Deluxe. The only sad point is that it seems the multiplayer will be confined to the Switch, so the existing fanbase on Steam (and the incoming XBOX release) won’t be a part of the party, but don’t let that stop you. With the Switch’s portable nature, you can go and shoot your friends (and strangers) wherever you go.