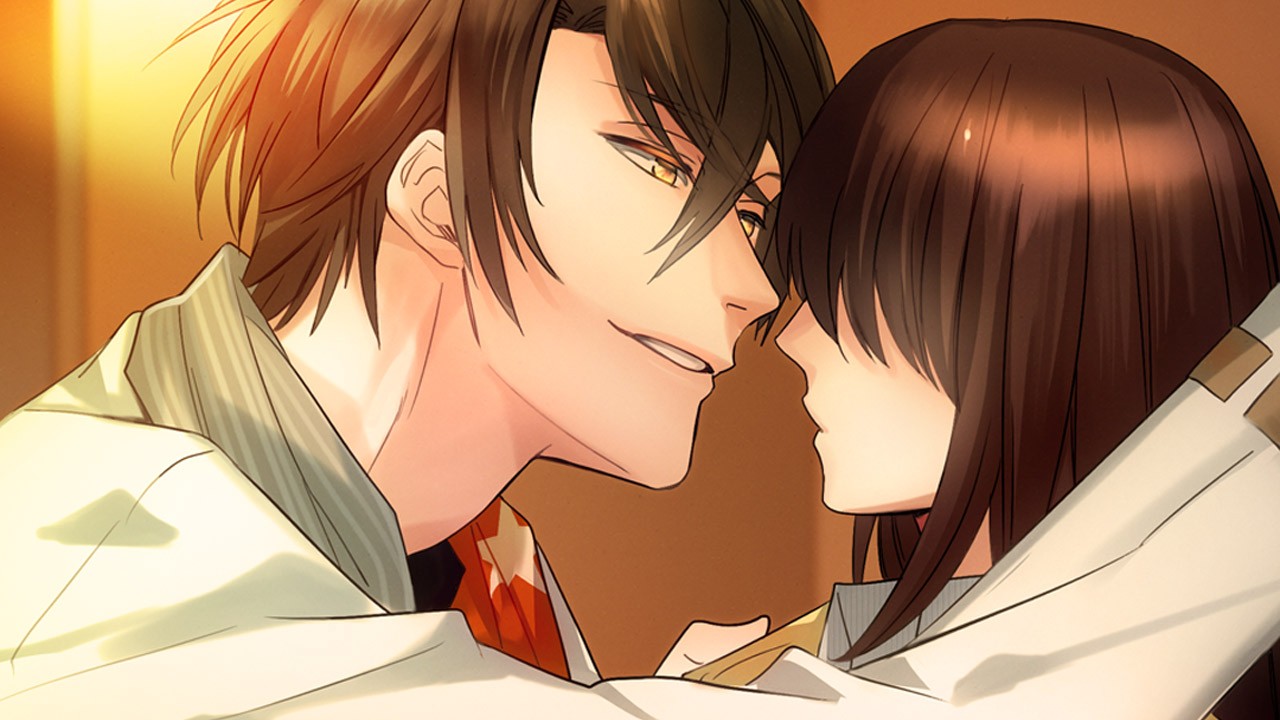 It’s been a while since I’ve put myself into the shoes of a young girl looking for love, and I think that’s because the field can be so very, very divisive when it comes to games and potential storylines. Sometimes you get a wildly exciting cast of historical hunks who help me better learn more about myself and the world around me. Sometimes I’m stuck being hit on by other women as potentially murderously awful bad endings await me. And, sadly, I’m sometimes stranded in the shoes of a Mary Sue, having nothing behind my eyes except for a vague flickering that lets everyone know I’m technically alive, and then a bunch of pretty dudes hit on me for reasons that they themselves cannot even properly articulate. This, unfortunately, is the experience I had in the bizarre workplace romance of Office Lovers.

Dogenzaga Labs are a strange group, because they’ve brought several of these types of dating simulation/romance chasing games to the Nintendo Switch now. With the Men of Yoshiwara, I sort of had to suspend my disbelief over everything and try to make an honest man out of a harem of pay-for-pleasure dudes. With The Charming Empire, I at least had an interesting backdrop of semi-historical settings to help cope with the fact that I could, in fact, fall in love with my brother. Office Lovers, however, seem to have taken almost everything out of the female protagonist other than the fact that she is, in fact, a cute girl. She works at this cosmetics company and is mostly overlooked until she’s suddenly tasked with working on a special project for Christmas. Pooled together with a small group of male coworkers of wildly different ranks and meaning (the CEO is in your group, for crying out loud!), you have to develop something new and amazing in time for the holidays or everyone is fired. No frigging pressure. Naturally, with the Sword of Damocles hanging over your head as you try to figure out something to utterly revolutionize the industry, this is the perfect time to start falling in love with one or more of your coworkers. I’m just joking: you can only fall in love with one at a time. It’s another great romance game where you get through the prologue, set your sites on one dude and get to work. No time for work, you gotta pander to these boys and their egos! 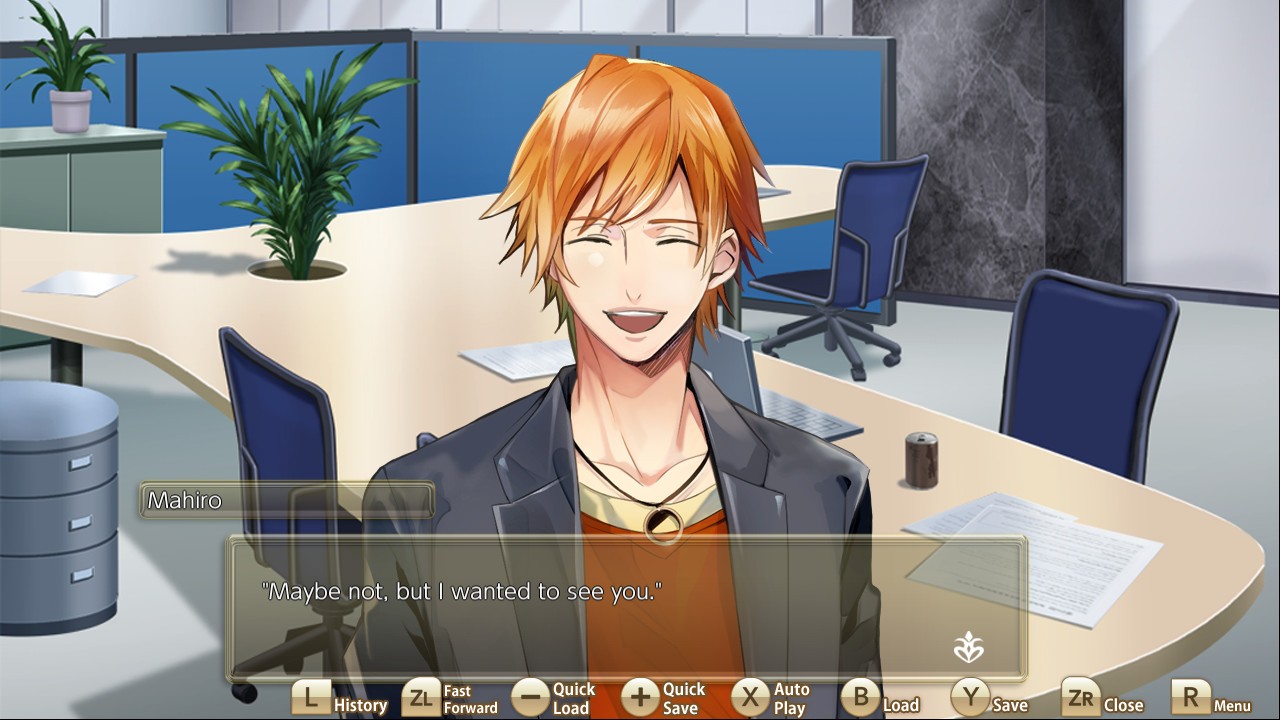 With Office Lovers, you’re getting a game that, admittedly, was ported straight from smartphones and it shows. On the one hand, the graphics are pretty solid, all things considered. You’ve got a variety of backdrops, from inside the office to different areas of the office to your apartment (probably owned by the office) and so on. The men are well-drawn, giving each a different archetype to fit into as his body language and a limited number of poses per encounter will let him express. You’ve got the flirt who really just wants to find the right woman, the work-minded dude who can only be distracted by a certain temptation, your former boss who is jealous and possessive (surprise: of YOU!), the quiet, mysterious dude who definitely will open up to you, and the aforementioned CEO, who looks maybe to be 29 and is gonna bang you on the copier. That’s not true, there’s no sex in these games, not even hinted. The best ending you’ll get is a long kiss in front of a sunset while you find out the company is saved or something.

Smartphone romance games are all about the choices, so Office Lovers gives Nintendo Switch owners plenty of opportunities to weigh in and decide about things. Naturally, most of these decisions are binary, with only two options given, and you don’t see immediate feedback from choices (unlike Charming Empire), so you just need to go with your gut on each one. Between chapters, you can see your “likability” meter increasing, which will help lead to normal or great endings. A normal scenario from the characters will involve ten chapters or so, with the chance to do a sequel chapter (where you see a bit of your relationship post the main story) and then a date scenario, where you get to have a proper date that doesn’t really occur within the main storyline. Each chapter will have you making about four to six choices, and most of them involve directly pandering to whatever the man you’re currently pursuing wants to hear. For example, if you’re working on Sadayoshi, make sure to never, ever mention another dude unless you’re utterly disparaging him. If you’re with Otori, keep your mouth shut and yes man him until he decides you’re worthy to be his gal. And if you’re the type who likes a challenge, go for Ryo, where you need to match him stroke for stroke with romantic aggression, BUT not outdo him, or it’ll detonate the whole thing.

What makes Office Lovers a bit of a not great time is the premise could not exist at a worst time in history. In general, a lot of the dialogue and banter is alright, but most of the talk when it comes to the men commenting on your appearance is straight-up negging and shaming. You get praised for being cute and beautiful, but then degraded for not having enough makeup on or for being “too clever” for your own good (which is weird, because you come across as empty-headed a lot). Plus, hey, four out of the five relationships that could develop in this game are utterly at odds with what’s appropriate in the climate of workplace power structures, particularly when it feels like the guys are wearing you down and not you pursuing them. I wanted to have fun and just gush over these J-Pop rejects trying to win me over, but I was uncomfortably aware that a lot of the talk was happening in the office, usually in earshot of other people, and no one, not even once, was like “Hey, this is creepy, do you wanna call HR?” Nope, just had to keep my head down and move forward. What’s most concerning is that a lot of Japanese women may grow up to work in office jobs, and this game is laying concrete to say that the attacks your coworkers carry out on your appearance are acceptable and you need to just pony up the lipstick if you wanna bag a man. 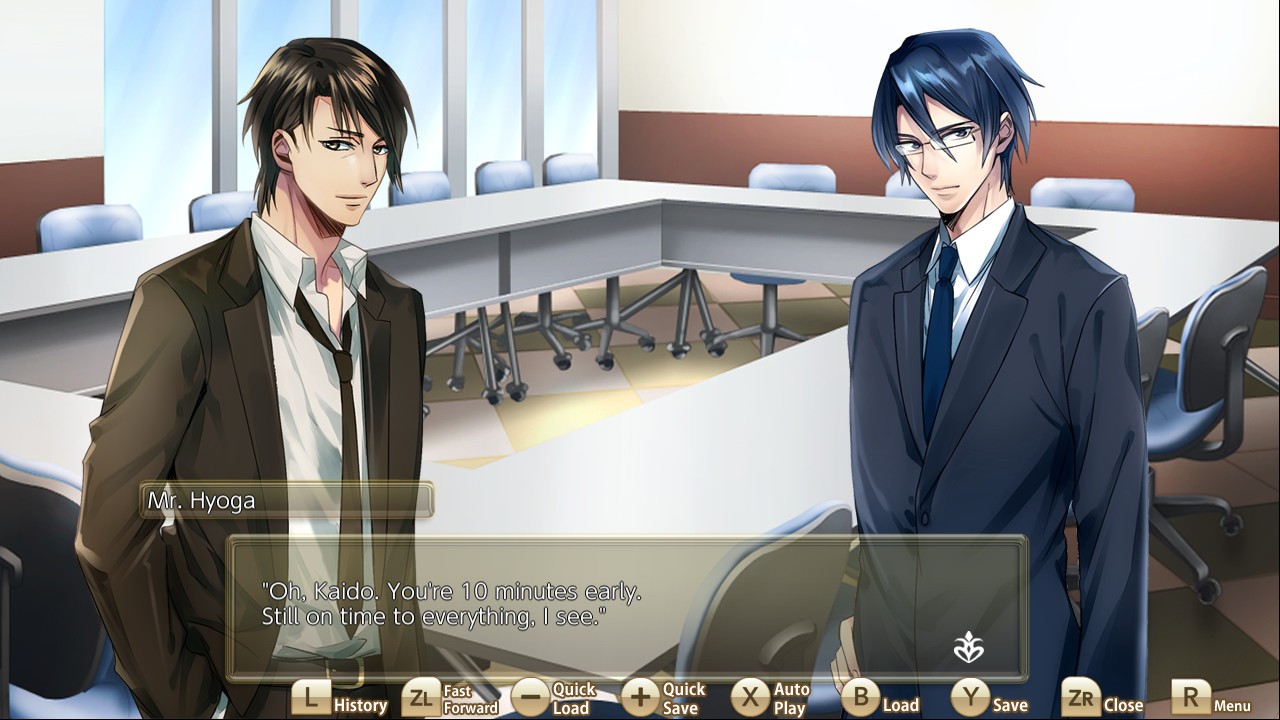 All matters of tonality aside, things do get better once you cross a certain threshold. The sequel and date chapters almost feel like they exist to make amends for what brought you this far. Office Lovers does attempt to create an air of normalcy, of showing that the end justifies the means so that you have an adorable relationship to behold and that everything worked out great. But we’re missing the crux of a good dating game (or any visual novel): voice work. Everything is silent, so you just have some fairly middling ambient music to bop along with as you watch your character (who I designated Amanda McMace) bite her tongue and only occasionally speak up for herself so that she can guarantee a warm body by the end of the day.

I hated this. I sincerely hated it from start to finish, and I am clearly NOT the target audience for Office Lovers. I thought I could get over it, but I couldn’t and I don’t recommend others try. It’s a short enough game, it’s functionally alright, but the entire air of it does not sit well and should not sit well with anyone who wants to have some autonomy in their lives. Go chase after boys in the 14th century. Have a historical fiction character show you you’re more than your pretty hair. Hell, have a nurse kill you and stuff you in the fridge (spoilers, sorry). But don’t let some douchebag salaryman toss you around emotionally because he’s good looking. You can do better than Office Lovers.

If you’re absolutely convinced the only way to get romance is to get stepped on by your coworkers, then this is the game for you, and you also need a friend.