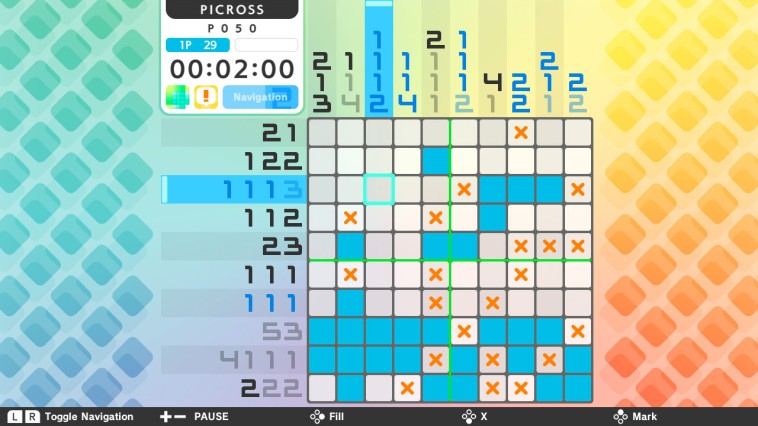 Oh, Jupiter Corporation. You had one job. You got to bring a picross title to the Nintendo Switch. You had an opportunity to bring one of the most beloved genres of the 3DS to the next mobile experience, and fans were salivating at the chance to play a great, clean Picross game. After all, you’ve done so many great ones, and the recent entries for the Switch of Picross pretenders have all been lacking something. But there was one big, big mistake. No touch screen.

If you’ve never played a picross game, the concept is simple and fun. You have a grid with a series of numbers laid out, and you need to use those numbers to guess which blocks get filled in with which colors. For example, if your grid is 5×5, and you get a line labeled “5”, then you’re going to fill in the whole line. But, if it’s “1 3”, then you need to have one block filled, followed by a gap, then three more. Simple, right? The challenge comes in when you need to account for the other lines in the grid layout, making sure not to overlap and accidentally messing up the numerical setup elsewhere. Once you’ve successfully figured out where all the lines go, the puzzle reveals itself and you see that you’ve made a delightful pixel drawing of something, such as a hat, a key, or the Queen of England. If that last one seems a bit far fetched, you’d be surprised how large and involved these puzzles get. 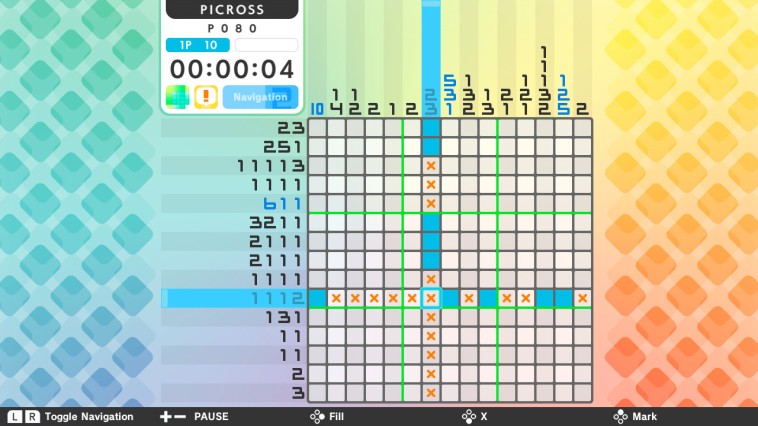 For the most part, Picross S delivers in a huge way. With one hundred and fifty initial Picross puzzles, you have a ton of variety in terms of what you can do and what you can accomplish. The first thirty or so puzzles are quite small and simple, so feel free to jump ahead to other pages if you’re an accomplished picross player and want to delve right into the harder challenges. Once you’ve finished a puzzle, the title of the picture is revealed to show you what it is, so there’s no mistaking what you’ve made. It also shows the current fastest time for each puzzle, giving you incentive to either go back and clean up your own times, or steal your friend’s Switch and beat their times, knowing it’ll secretly drive them mad. I liked the puzzles, as the graphics and design were cute, but they were all pretty standard. I recently got a chance to play the still in Japan Pictologica, a FInal Fantasy Picross game, and I’ve grown fond of having familiar and fun sprites to unlock. Fingers crossed for a US release! But don’t let that distract from the wide variety of sprites chosen here for Picross S.

There’s also a new mode, Mega Picross, that I’m still on the fence about. If picross is simply too easy for you, the Mega Picross mode introduces a new rub of having numbers that affect two rows instead of one. Previously, with picross, you had to only think about numbers in a straight line. But with Mega, you need to consider that the “5” you need to unlock might be two up and three straight, making a mini block in the middle of the puzzle, which can be quite a bit trickier to figure out in terms of conflicting with other, standard lines. On the one hand, it was a definite up in challenge and difficulty, and, without the correction mode enabled (automatically changes a block if it’s wrong), your puzzle time extends dramatically. On the other hand, we are putting together pixel art, and sometimes it can be a little subjective on exactly where an edge of something that’s supposed to be round would appear in a blocky transfer. I think I prefer standard picross, but the Mega mode is definitely appreciated in terms of originality and making the most out of the puzzles they created for the standard mode. Yes, you won’t find new artwork to unlock in Mega, so I hope you liked what you saw in the base picross.

Picross S is also quite well designed and optimized for the Switch. It’s incredibly snappy to load and jump between menus and puzzles, so I can tell that Jupiter took a lot of consideration in making this game. There’s adjustments to cursor speed, changes in the background music (nothing that rocks my world but also nothing I hate) and the choice of turning on and off the hint roulette, which randomly completes two lines for you (incredibly helpful on larger puzzles). But no matter how hard I checked, no matter where I looked, there was no option for touch screen controls. 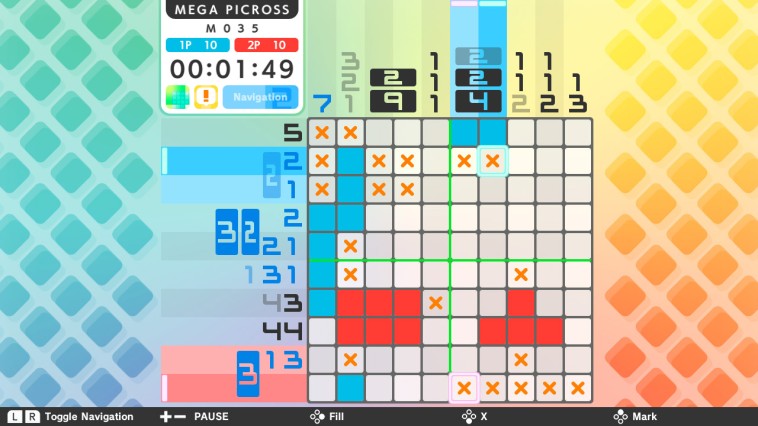 This is mind boggling to me. It’s not like Jupiter Corporation is some greenhorn at the game, they have made Picross for Nintendo for almost as long as NIntendo has been making games. They created Mario Picross for the Game Boy, for Christ’s sake. They made the amazing Club Nintendo Picross titles that were some of the last rewards, and they made the Twilight Princess Picross as one of the first for the new Nintendo member’s system. They know Picross better than I know terrible burger joints, and I make a point to try every restaurant that serves hamburgers that I come across. And yes, they’ve made touchless Picross games before, but that’s because the consoles they developed on specifically had no touch screen, like the Super Nintendo. Did no one tell them? The Switch has a touch screen! Without being too dramatic, this seriously and severely handicaps my enjoyment of the game. I can forgive a lack of flair or storytelling because not every game needs to be gangbusters, but, for a game that’s supposed to be inherently relaxing and focusing on your own enjoyment, this is bananas.

I sincerely hope that Picross S receives touch screen support at some point in the future, because it’s a big make or break for me. The game is totally playable and not at all inhibited, but it’s purely a comfort and enjoyability pivot for me. Talking to a couple other people, they seem to have zero problems without touch screen, so I do hope that maybe I’ll get over it at some point. If you’re a huge Picross fan, then I’m happy to tell you that Jupiter has made more of the same and you’ll have brand new puzzles to play on your Switch for a quite affordable entry point, If touch screen play is important to you, however, then I’m afraid you’ll be left out in the cold.