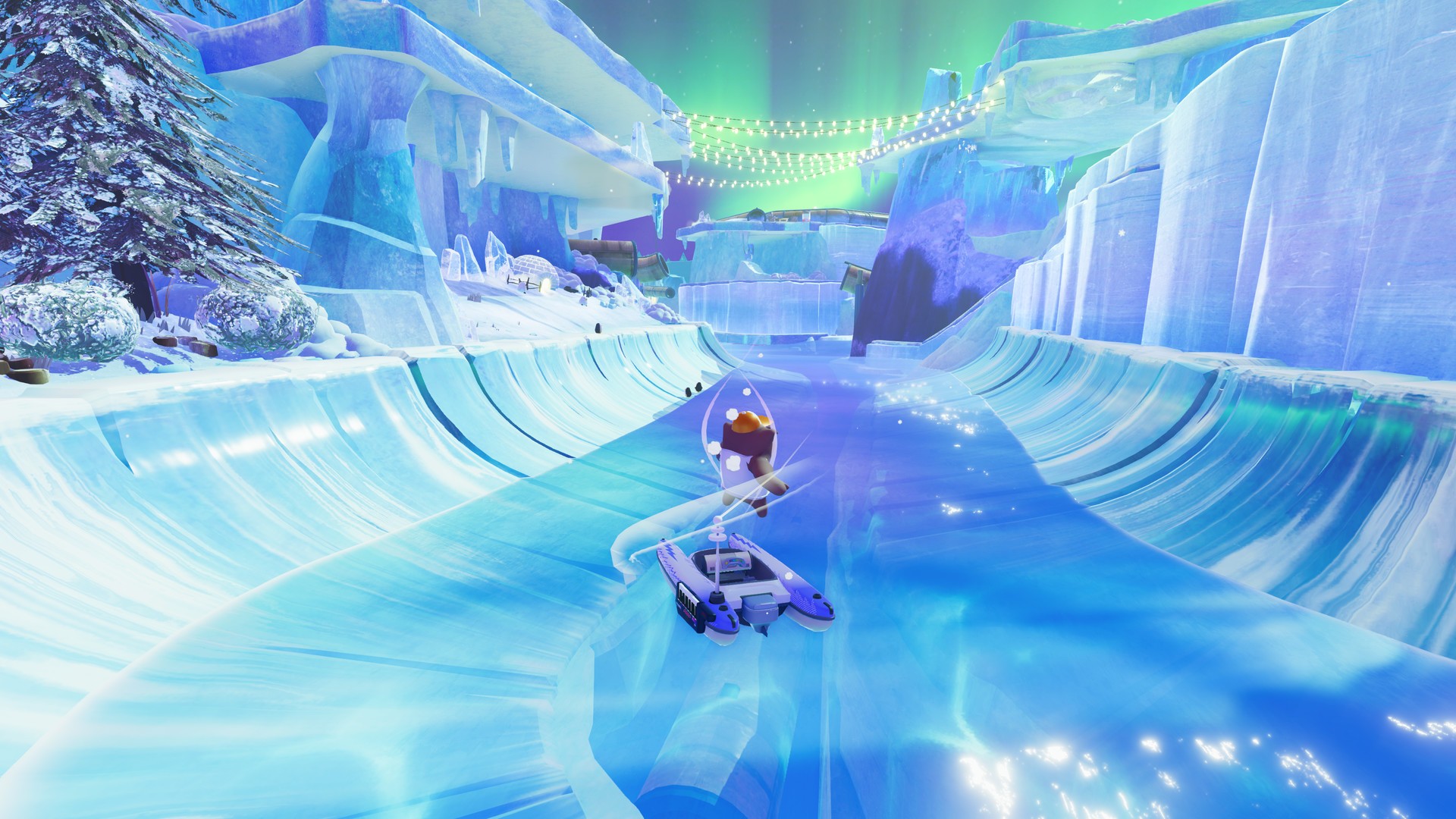 Google Stadia is flying under the radar right now with the current generation of current consoles coming to an end and a new generation on the horizon it is still difficult to see quote how the underrated Stadia is going to perform.
Wave Break comes crashing onto the scene in which is a first to Stadia exclusive with plans to arrive on Steam at a later date. Funktronic Labs are the developers here and they have created something here that is both unique but also familiar to some gamers. Now if I muttered the words Tony Hawk’s Pro Skater to most experienced gamers they would know exactly what I am speaking about. If you don’t know what I am talking about Tony Hawk’s Pro Skater is a series of skateboarding games that were massively popular in the early 2000s and went on to succeed with many sequels and then fizzled out around a decade or so ago.

You may be asking me what this series of titles has to do with Wave Break and it is clear to see when you boot the game up and start playing through it has taken some huge inspiration from the Tony Hawk series. The first we heard of Wave Break was quite recently actually when the Google Stadia showcased what games were coming to its platform after a very quiet first six months in the life of Stadia. Wave Break caught my attention as it looked from the trailer to pay homage to skating titles in the fact you could do similar skills and tricks but on a speedboat with an animal taking the wheel. You’ll notice almost immediately that the game has an 80’s/90’s vibe to it and that is just basing it off the visuals. For some reason, the title California Games from the Sega Mega Drive era popped into my mind. So there you have it, Tony Hawk esque animal boat skating fun is what you are dipping your toes into. 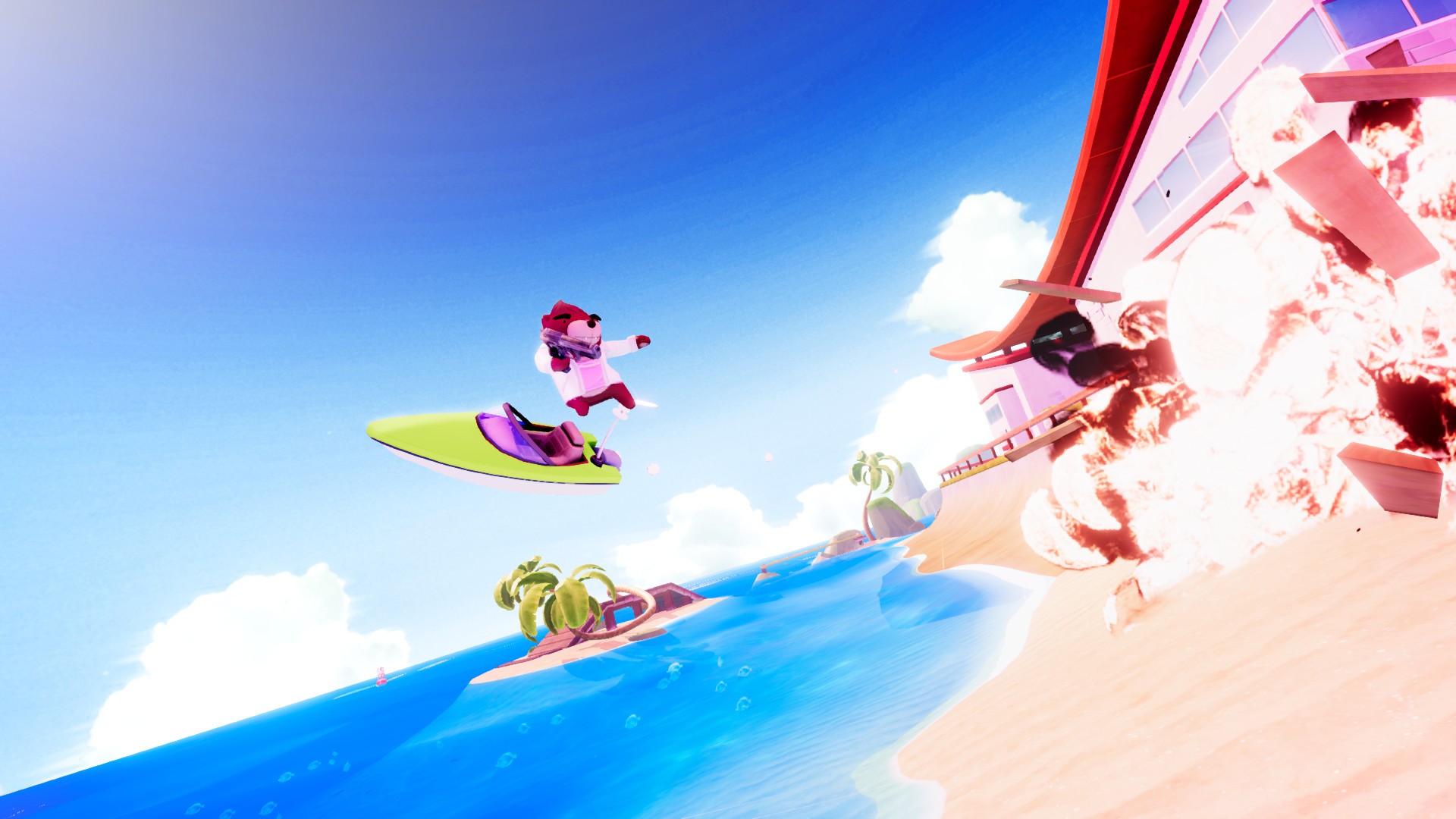 If you have played skating games before then you’ll find this fairly simple to pick up and play without much thought but if you haven’t then there will be more learning and adaptation for you to negotiate but that is all part of the fun here. The control system is very similar to skating games in the fact that you’ll be able to conduct various combinations of buttons to pull off tricks and using Y to grind along edges. There are four levels to play through here and I guess we will call them skate parks for the purpose of the review. Instead of a skateboard though, you are in control of a mini speedboat and it surprisingly works well.

The campaign mode of the game will of course place you on the first level of the game with a list of objectives to work through and they echo Tony Hawk almost to the letter. By letters, instead of collecting the letters S-K-A-T-E you’ll be plucking the letters B-R-E-A-K instead, see why I directly compared it to Tony Hawk’s Pro Skater now? There are of course the obvious missions such as hitting three preset high scores, collecting other objects, and hidden cash. You haven’t got all day to grab all these though you will be on a time limit to try and proceed through these but obviously you can have multiple attempts to tick them all off. Once you smash through enough of these then the next level will unlock for you to try.

Now I’ll have you know that I was actually very good at skateboarding games and in the top ten players in the world at Tony Hawk’s Project 8 on Xbox 360 so I guess you could say I am a dab hand at the genre. What I found a real bugbear here was how clunky and frustrating the grinding element was. I found it difficult to keep a consistent grind going no matter how hard I tried and I didn’t feel like it was down to my ability. This made it increasingly difficult when attempting to chain together combos to smash the high scores. Aside from this the game is pretty solid in terms of how it plays and handles it actually does a really good job and genuinely fun and unpredictable to play. I enjoyed having that feel again of rushing as fast as I could to see how many objectives I could do in the timeframe and the perfectionist in me stopping the game and starting it again because I did one trick slightly off. 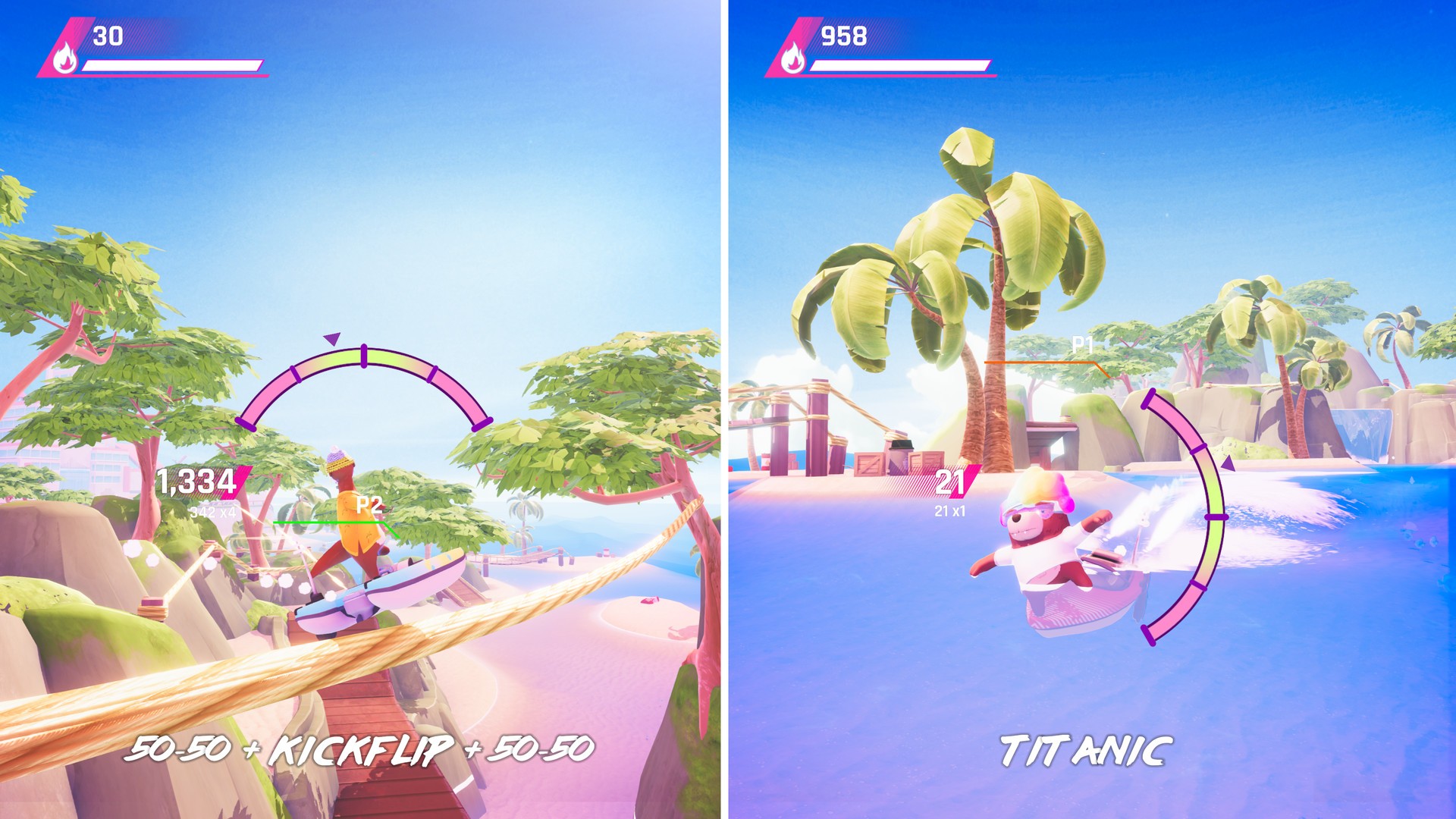 Another frustrating feature was the camera angles sometimes navigated totally off and didn’t fit the natural style you were playing. This made it especially trickier in more contained areas but in the open waters, it didn’t seem quite as annoying. Whilst this criticism may come across as big points it doesn’t hamper the gameplay experience too much and I genuinely had so much fun with the core elements and chasing the objectives. I did feel four levels felt really short and I worked through the campaign ever so quickly in maybe just shy of two hours and that was spending my time doing everything. Hopefully, the developers can add in some more levels at a later date, I do appreciate the logistics of the levels as the ones that are there are excellent in visual design and colourful too.

The soundtrack here is surprisingly good and has an 80’s vibe to it and I found myself turning the background music off on Spotify and listening to the game’s soundtrack as it really added to the gameplay. It’s a rarity these games to have an exceptional soundtrack and Wave Break has nailed it in this respect so hats off to the developers. Thankfully they chose to add online multiplayer to Wave Break so that you can play against others and your friends. I found it genuinely exciting battling against someone to try and nail the high score but also the fact you have machine guns on your boat so you can wreck their chances mid-combo. There is also the option to use cash to upgrade your character and customise them too.

Overall I really enjoyed Wave Break more than I initially thought I would do, the campaign mode whilst short-lived was fantastic fun. The multiplayer adds longevity beyond the campaign mode for those who want a competitive edge. I feel that more levels are needed here to make it feel worth its value of £23.99 at the time of writing but to hardcore fans of the skating genre, it is well worth the investment or just if you fancy something different. Beyond this, some additional work on the grinding elements and camera angles and it would tune the title to perfection. Would I recommend Wave Break, I certainly would on Stadia it is up there with the best of the titles on the platform.

Wave Break is a first to Stadia title and it splashes onto the scene by giving a nod to the Tony Hawk titles and borrowing some elements but in its own unique way.