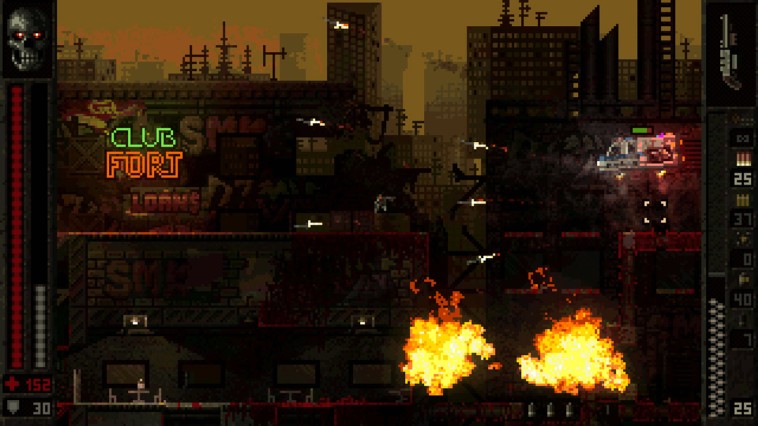 I do kind of love when people go out of their ways to try and prove a point or make a stand about something that no one has actually cared about in years. For example, I think that the original release of Mortal Kombat on the SNES forever marred the Nintendo’s reputation, and everyone continually refers to them as a “kid’s console” simply because this particular title had no blood and no fatalities. Nevermind that Mortal Kombat II was the full arcade experience and performed better than the Sega Genesis, it was too late, the mark had been made. So, despite games like Mace: the Dark Age, Eternal Darkness, Mad World or, more recently, Bayonetta 2, Nintendo continues to be seen as kiddy, and there’s always one developer who wants to break that mold and shock people. So, even though Transhuman Design didn’t make Butcher for the Switch, it’s hilarious to see it here, front and center, and, guess, what, it’s actually pretty fun.

Butcher is incredibly simple in concept. You’re a dude from a spaceship. You are being sent to another planet which may or may not be some kind of penal colony. You’re to destroy everything that’s alive, and do it fast, because they all have weapons too. If you played a FPS from the 90s, you know what’s available here. You got your assault rifle, your shotgun, railgun and, of course, a chainsaw. The game may be 2D sidescrolling, but you know exactly what you need to do: shoot and stay alive.

Butcher is basically a love letter to the hyper machismo gaming of the Windows 95 generation, and I’m not saying that in a bad way. Everything about it has a combination of Quake, Doom and Duke Nukem just floating right on the surface. The easiest recognized difficulty is hard, but they did add a “casual” mode which outright mocks you for choosing it. The flow of the game is to basically try and inject testosterone into you through the screen, and is full of insults if you pause and coarse language when it gets a chance. If the gameplay wasn’t solid, this all would just be further insult to injury, but, since the game itself is pretty good, the overbearing “SO MANLY” tone is bearable and, yea, I enjoyed it. I know plenty of people on the internet will probably hate it for the message alone, but, as we learned from Hatred, it takes more than blood and pissing people off to sell a game. 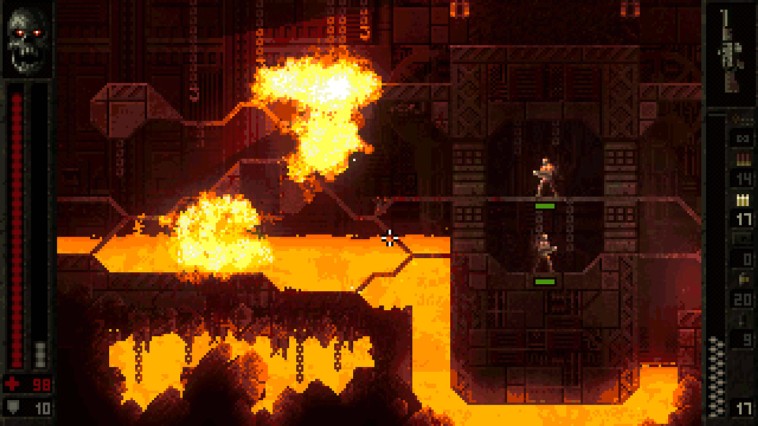 Butcher fails to mention, in their description, one of the games that most closely hits home for me: Abuse. Butcher feels very strongly reminiscent of the brutal difficulty and surprising carnage of this DOS shooter from the mid 90s. The differences, however, are immediately apparent. Butcher, as a 2D, pixel art game, is most focused on atmosphere and tone throughout, and I think it delivers very well. You can run, jump and shoot, and that’s really about it. Left stick to move, right stick to aim, and the inconvenient X button is a weapons toggle. I understand that they probably kept this off the shoulder buttons to avoid accidentally swapping in the middle of a firefight, but I had to change my grip to get my grenade launcher ready, which I argue is far worse. The enemies, and there are a lot, aren’t just warm bodies that explode with enough shots. Even the simplest grunts know you need to be dealt with, and they can fire and track you with surprising accuracy. There are what I call “freak” grunts, who run with crazy speed and feel like zombies from 28 Days Later. Then, once you encounter enemies with both flame throwers and jetpacks, the game starts to feel a tad unfair.

And it is unfair. Butcher makes no disguise of it’s favoritism to straight up killing you, and it does so with relish and frequent blood fountains. Or you catching fire. Or you exploding. Don’t think this is all one sided, all of these deaths occur to your foes as well, and it is GOREY. I don’t even mean bloody, I mean red, pixel chunks of your enemies are often strewn about after you get raided. There’s some kind of teleportation system set up here, so you’ll get a moment of electrical buzz to let you know where an enemy is about to spawn, and that’s where you can paint the walls red in record time. I almost want to warn against people with weak stomachs, but, I think if you’re old enough to know the difference between right and wrong, you can also see the difference between actual viscera and whatever you’d call the stuff in Butcher. Basically I wouldn’t let my kids play it because they don’t have adult teeth yet, but I’d let them enjoy Butcher before they could legally drive a car.

One of the reasons that Butcher succeeds is that the game does reward skill. You can very easily get into an awesome groove of running, jumping and shooting with a lot of rhythm, and goddamn is it enjoyable. You feel like an action movie star when you’re hurtling through space, blast two guys behind you, and then land at a door just as it opens and you can chainsaw the guard who’s day you’ve just totally ruined. There are also secret skulls to collect and caches of weapons to find, so keeping your nose to the grindstone and exploring every corner is worthwhile. If you’re on casual mode, no hidden skulls, so git gud fast so you can fully enjoy the game. 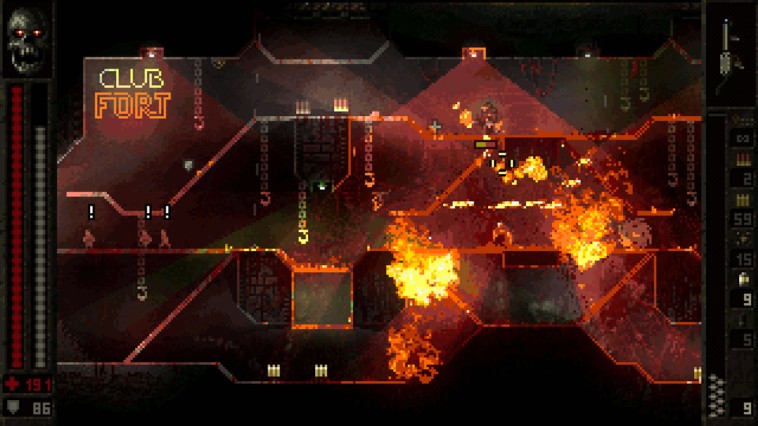 Lastly, Butcher does have a kickass soundtrack. Taking a lot of cues from Trent Reznor’s work with Quake, Butcher’s music is some serious industrial, heavy-bass techno, set to put you into a mindset of destruction and mayhem, and I’d say it totally succeeds. Nothing is going to win awards here, but it’s like when you find the right wine to pair with your cheese, only the wine is dank beats and the cheese is a massacre. I think the only thing that could have made it better is randomly having one level play Somewhere Over the Rainbow as sung by an orphan child. You know, really creep out the audience.

Halloween is traditionally the time for horror games, and I don’t think of Butcher as a traditional horror game. For one, it’s easy to argue you are the monster and everyone else is the victim. And i was never scared while I played it, most just adrenaline fueled and thirsty for destruction. But it does feel like a great game to jump into for this season. Everything’s dark and ominous, Chucky and Jason roam the streets…why not become someone to fear yourself? If you can’t wait for Bethesda to bring Doom to the Switch in a few months, or you simply want to scratch that low-fi itch of murder, then Butcher is the right pick for you.