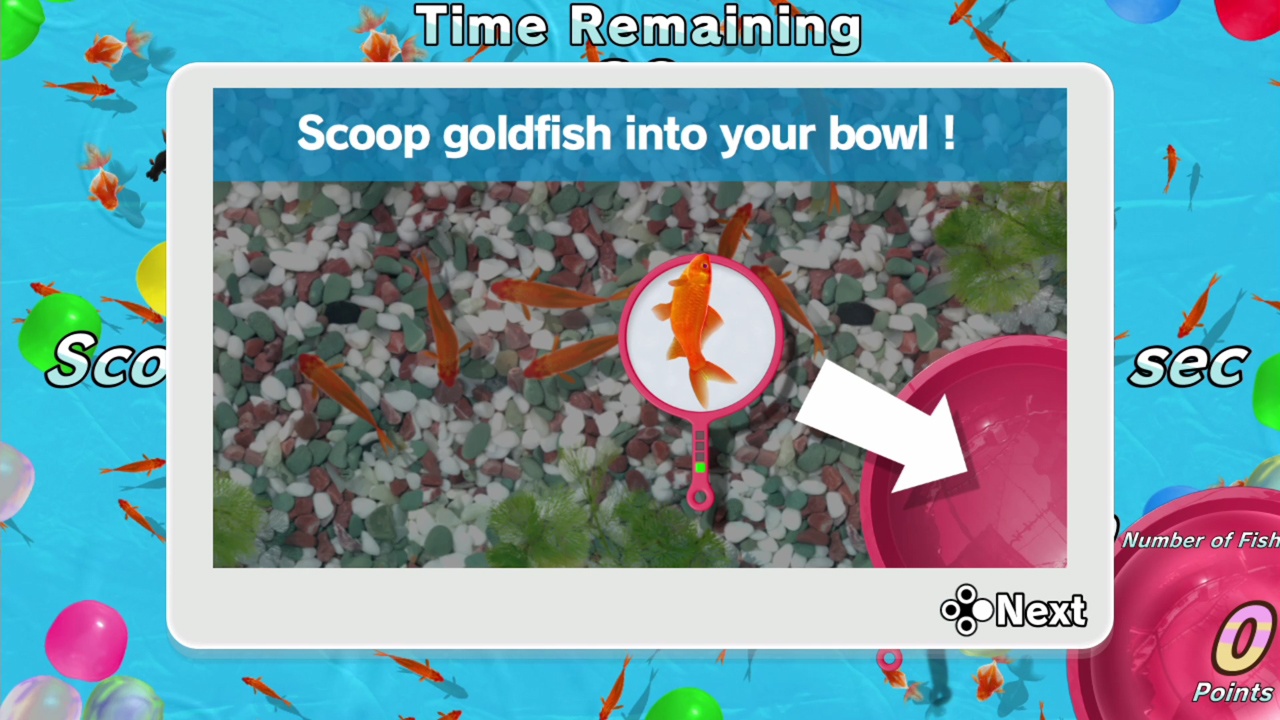 It hasn’t been the best time for fans of casual games on the Switch. I think there’s this inherent connection that “simple” or “casual” can just be tied to “low effort” and left at that. Don’t get me wrong: Go Vacation! was a massive breath of fresh air and still sits on my Switch in celebration. But other things have really gone by the wayside. Skee-Ball was a huge disappointment, the several pinball games have gone for so long without updates, and would it kill someone to make a decent iteration of a board game collection, featuring mahjong and checkers? No, those all seemed to land in a different pile entirely, so I didn’t have massively high hopes when it came to Catch ‘Em! Goldfish Scooping. So, take it with a grain of salt when I say that this was actually pretty damn fun.

The game is based around the idea of goldfish scooping, which is still a huge activity at modern Japanese festivals and maybe other parts of the world. The idea is that you get a hoop with a handle and the hoop is covered with a tight piece of rice paper. If you move smoothly enough, you should be able to get under a goldfish, scoop him up and get him into a bowl with water before the rice paper tears. For people who are truly skilled, I’ve genuinely seen someone scoop about ten fish before his hoop broke. As for my own experience, I gave it a go ONCE as a novelty, immediately broke my hoop, and considered it a well paid lesson in “don’t play this particular game, especially since you didn’t really want a fish anyways.” But yea, that’s everything, in a nutshell: scoop up a fish. The title of the game is literally the core mechanic, back story and your motivation to play all rolled into one. How many Final Fantasy titles can boast that? 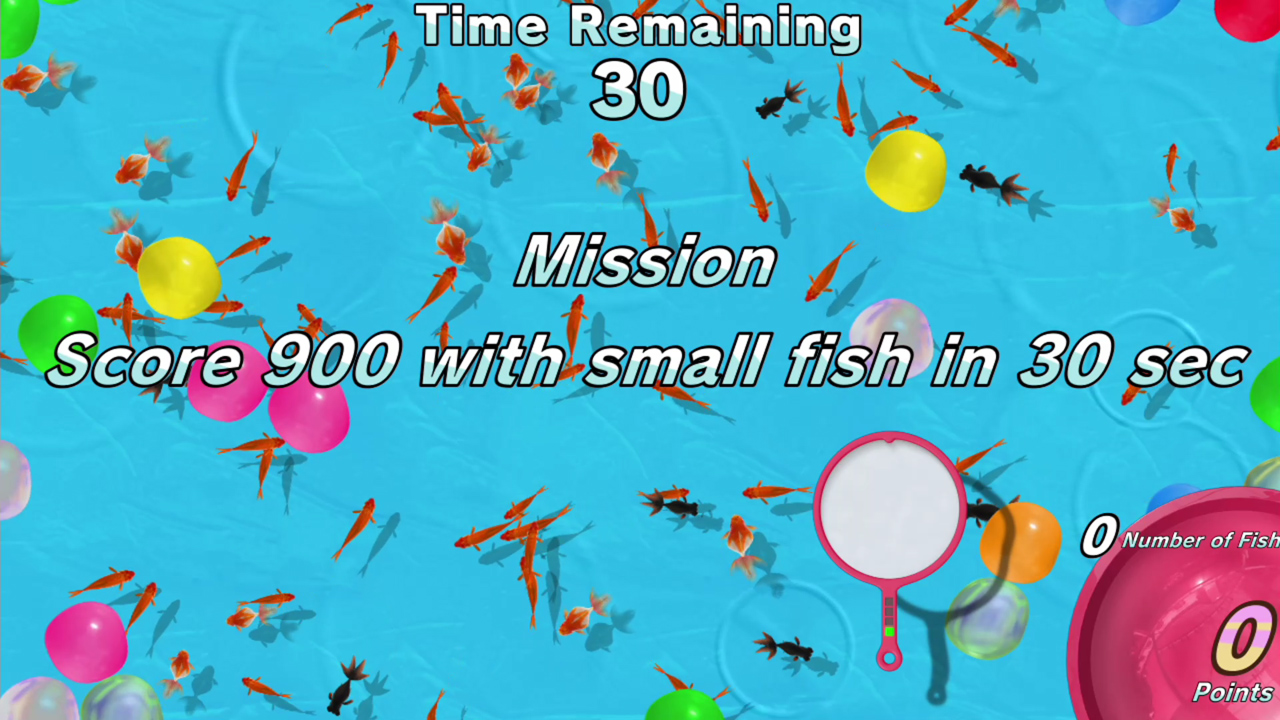 Now, naturally, the game is slightly modified to make it more Switch friendly, but I think D3 Publishing and the developer, Clouds, could’ve gone a bit further to make it even better. See, there are two ways to play the game from the purely mechanical range: one-handed JoyCon button pressing and one-handed JoyCon motion control. The motion control is, and I’m sorry to say this, garbage. You can’t move around the screen to catch a fish without using the joystick, so that’s already a bit bizarre. Additionally, the scooping motion isn’t your expected move: instead, it’s more of a tilt and straighten, like you were lightly ladling out soup. This doesn’t feel natural or instinctual to someone who’s actually tried to scoop the fish AT ALL, so that’s a massive deficit to come back from already.  Plus, the tilt motion is kind of finicky, and you’ll often catch and then immediately release the fish because the game interprets you doing a double dipping motion. The button configuration, which asks you to hold ZR/ZL to dunk the paddle and release to raise, is both easier, more precise and honestly more fun overall. It’s a bit of a loss, because we all know the JoyCons have amazing gyroscopic manipulation, and this handles like an early generation Wii game. If you can’t get over that, I understand: I was pretty disappointed too.

But, if you can bounce back and focus on the game at hand, things get a bit more entertaining. Firstly, there are quite a few options for how you can take on up to three friends at once in fish scooping. There’s time attacks, score attacks, limited paddle numbers and “get all the fish,” a personal favorite with kids. The time attack is probably the most varied version of the game, as several elemental factors come into it. As you may have guessed, scooping the pretty orange goldfish are the bread and butter of the game, but other things crop up as well, including the puffy cheeked fish and some rare black goldfish, all worth additional points. Occasionally, an incredibly fast, surprisingly huge shiny goldfish will arrive, complete with the screen alerting you to such, and catching this breed is almost a guaranteed winning move. Then there’s also environmental hazards, like predator fish who show up and will snatch the carp right off your hoop if you’re not careful. And, if that wasn’t enough, presents will also appear randomly on the screen, acting as activators for powerups to the game, such as making your hoop larger for a short amount of time, or reversing the directions on your opponent’s controls. It’s a simple thing, but I was surprised at the competitive edge that the game can provide.

If you’re a lone wolf, Catch ‘Em! Goldfish Scooping does have some single player modes, but they’re rather pitiful in comparison to the thrill of the group scoop. Mission mode is basically a progressively bigger waste of time, challenging you to get a certain number of fish, then get a certain number of specific fish, then see how long you can combo…I get it. There are going to be people who love this game so much they want to spend all their time catching fish and proving to themselves and their judgmental families that this isn’t a massive waste of time. But it is. You don’t unlock magical special scoops or different varieties of goldfish, you just get to proclaim “I did it!” to an empty house except for your fish tank, which is also judging you. I guess, if you’ve already bought the game, it seems a shame to not play the missions, I just can’t promise you’ll like yourself when you’re done. 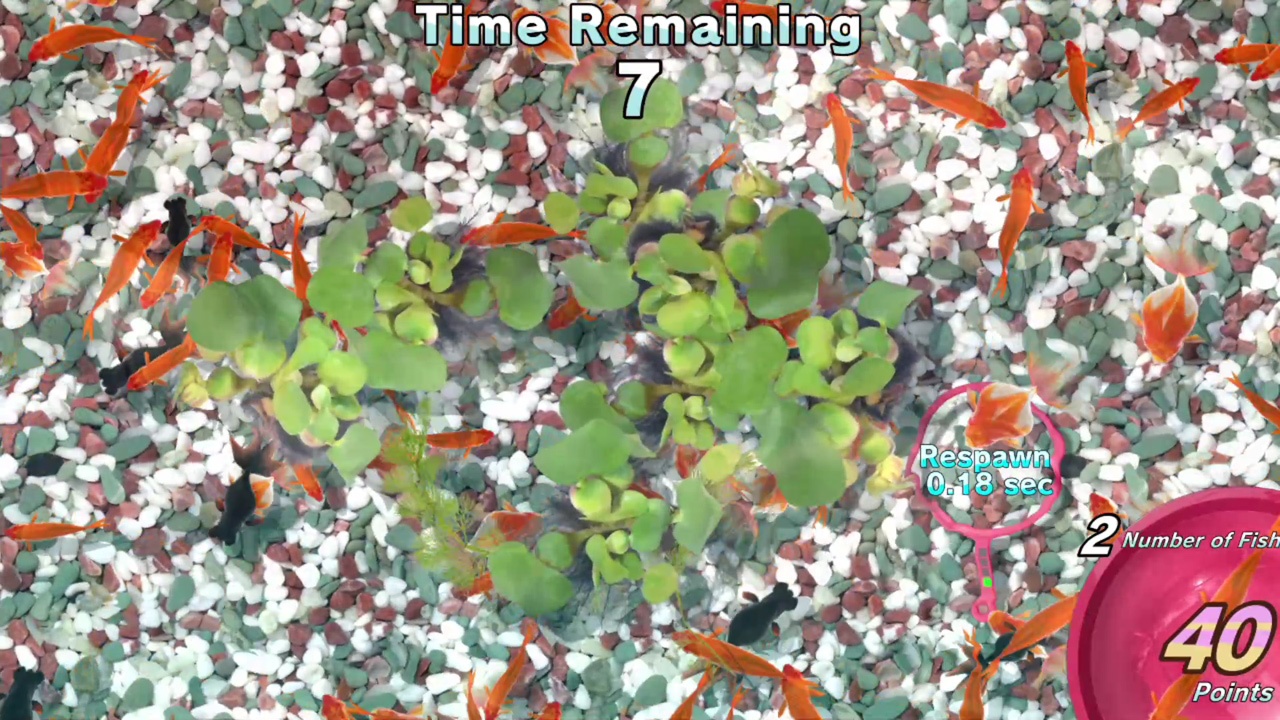 But what makes the game worthwhile, overall, is the presentation and mindfulness of the audience. You have three different arenas to catch the fish – fish tank, kiddie pool and traditional pond – and all three look gorgeous. The fish swim and move about with some great fishy AI, and I actually had some tense showdowns with my kids while we waited for the last three fish to come out from under some plants so we could scoop them properly. There’s actually a bit of tension in trying to keep your combo going: if you miss scooping a fish, your hoop breaks, the combo stops and you need to wait a few seconds to keep going, which can be critical in high stakes games. If you’re doing limited hoop mode, this can be fatal. But, if you’re not going all Deer Hunter on a game about scooping fish, you can surreptitiously help out your children to victory by actually dumping your fish into their bowls. You can’t be an ass and steal other people’s fish, but the game allows you to donate fish to other people and simultaneously punishes you if you forget what color you are. Which can happen when you have four identical hoops on the screen with only a base color as variance.

Catch ‘Em! Goldfish Scooping isn’t going to take you away from Dead Cells or make the days pass faster as you wait for The World Ends With You. It’s not going to usurp Octopath Traveler or Xenoblade Chronicles II as your go-to RPG recommendation. I can’t even say that it’s worth more than actually catching a fish, which could, potentially, give you years of enjoyment and relaxation (as any fish owner will tell you). But it’s simple, it’s fun, and it made my kids happy for a bit. I can’t believe they screwed up the motion controls, and that unforgivable decision keeps it from any kind of great score. However, as just a game that you can pick up and play with nearly anyone, it’s a pretty decent catch.