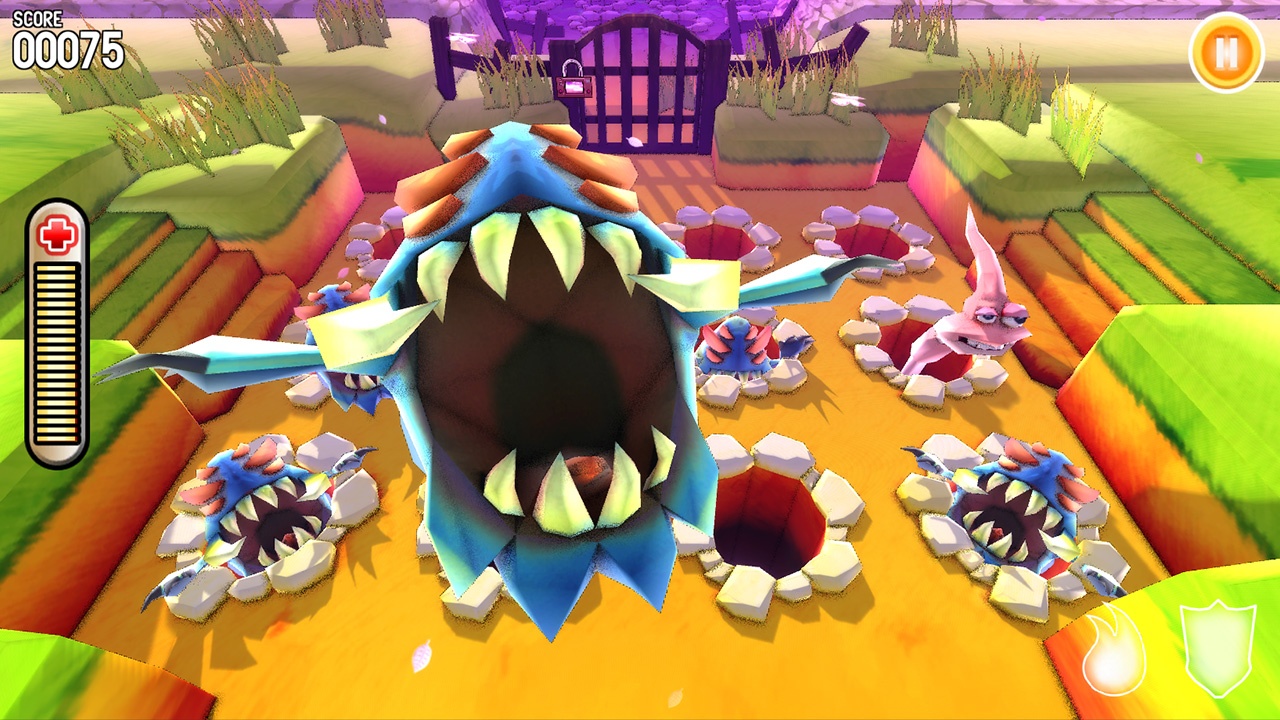 What have Penguins and Aliens got in common? Well, nothing really, apart from it’s cold in space, as well as in the arctic, maybe? Or could it be that they both star in Pixel Bones Studio’s latest release on the Nintendo Switch: Dead Fun Pack: Penguins and Aliens Strikes Again. This game, published through EnjoyUp Games, comprises of two separate titles that have seen previous releases on the Nintendo Wii U, namely Run, Run and Die and Mutant Alien Moles of the Dead.

This culmination of games into one neat package consist of a variety of game styles which, themselves, contain variations within their structures to produce two very different games designed to entertain, as well as challenge the most hardened of players. The first of the two titles on offer, Run, Run and Die takes its form on the style of a ‘runner’ game; a platformer that continuously moves along as you guide your character over a series of obstacles. Gaining their popularity through the medium of mobile platforms, these style of games contain the ‘one-more-try’ mentality with their, often, gruelling challenge and level-learning mechanics.

Covering twenty-four levels, you take control of a penguin who, after being the subject of a series of experiments within a secret laboratory, frees himself and embarks on a quest to escape from the dangerous facility. Watched over by a series of security cameras by the evil Mimi, our hero’s tormentor, you must leap your way through a series of levels that change perspectives, not only from 2D to 3D, but also in its presentational values that takes you on a retro-filled journey of graphics gone by.

Although easy to pick-up-and-play, the only control scheme being the A button to jump, this is a gruelling game in which you’ll meet a grisly demise over and over; in fact, the game even keeps track of how times you die. It provides a tough challenge, but not one that is impossible to complete. Infuriating in its mechanics, the fun of this title lies in its changing perspectives; although these viewpoint shifts can become frustrating too. Each of the levels consist of complex 3D mazes which, depending on your position in the room, switches from camera to camera as they follow your progress. Although interesting in its mechanic, this presentational style can also add to the difficulty as the constant shift in view can catch you off guard, as well as immediately throw obstacles at you that were previously unseen. It can be frustrating, but with time and patience the layout of each level can be learnt, allowing you to traverse its traps eventually. 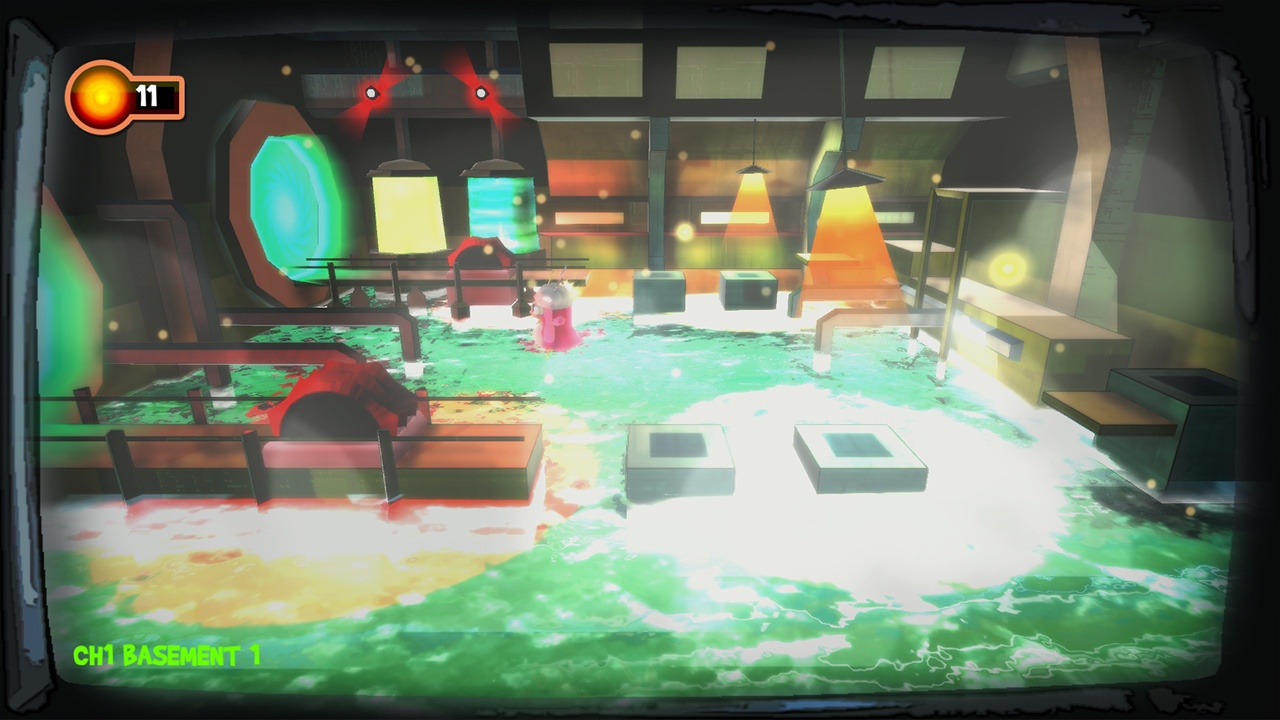 However, for me, the most enjoyable part of the game’s style was with it throwback homages to consoles of old. As you progress through the game, the graphical style of the levels change to retro images that reminisce back to the days of the ZX Spectrum’s Knightlore or Fairlight and the wireframe days of the BBC Micro home computer. These variations in graphical style offer a nice element that prevents any staleness from setting in; this is further boosted by gameplay variations that require a different form of dexterity, such as jumping from platform to platform on top-down views as you ascend to avoid the jaws of a huge machine that chases you.

Its story of escape is presented through a series of cartoon still-frames between each of the levels; as well as a series of sound effects and background music that can be annoying and slightly repetitive at time. This is further increased by the number of times you die, setting you back to the beginning of your current level. There’s no room for manoeuvre here, as the mechanics of its jumps and obstacles are so tight, that the importance of timing becomes paramount in order to succeed.

In a change of pace though, the second title on offer, Mutant Alien Moles of the Dead, presents a very different style of gameplay; although one that can still be as infuriating and challenging as the first. This game plays in a ‘whack-a-mole’ style, presenting you with a series of holes, from which a variety of aliens will pop their head out of. In order to succeed in this game, you need to whack each of the aliens as they appear. However, a number of worms also appear which need to be avoided; hit one and you lose some of your life. 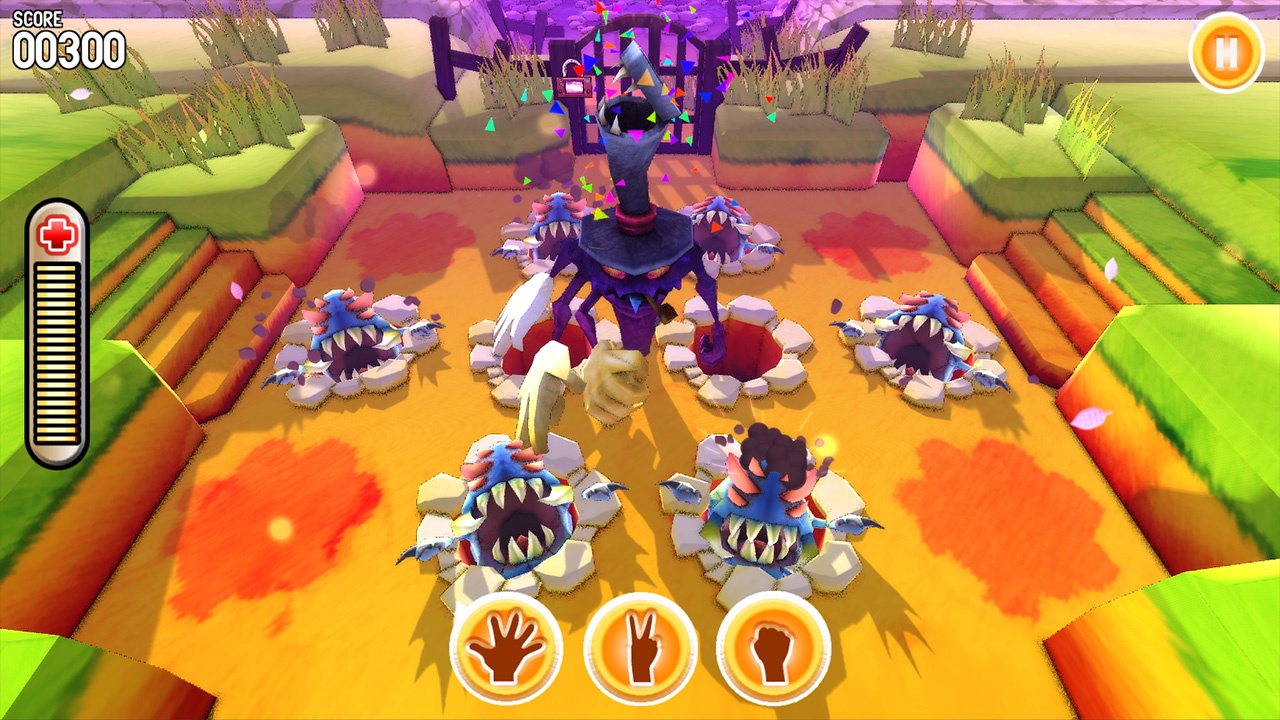 The story revolves around you trying to thwart the plans of Janken worm, as he embarks on a quest to conquer the Earth. The game is presented with a series of holes from which the aliens and worms pop out from. An onscreen gauge represents your life which slowly expires with each worm hit, alien attack or boss battle loss. The latter of the two options come in the form of a mini-game style of play that mimics the mechanics of rock, paper and scissors. Presented with three of the choices, you must successfully counter the choice of the boss to reduce his health. However, guess wrongly and a series of aliens will fly from their holes and attack your screen directly; greatly reducing your own health bar. Once its depleted, then it’s game over. However, it is also possible to avoid these attacks by splatting the aliens as they fly towards you.

It’s a simple premise and immediately easy to pick-up-and-play. However, it can be particularly challenging; especially with its element of luck around boss battles and the sheer number of aliens that attack if you guess wrongly. Should you meet a grisly demise though, you do have the option to continue, although you do lose all of your accumulated points. Although primarily a ‘whack-a-mole’ game, Mutant Aliens does contain a few elements that help to break up the monotony of a single play-style. The aforementioned boss-battles offer a variation, as does a series of dialogue breaks that tell a story of sorts. The biggest change of pace though, comes in the form of a homage to the Run, Run and Die title, that plays a similar game in the retro-style of the ‘Game and Watch’ series of handheld games.

It’s a nice inclusion, even containing the aesthetical look of the buttons and casing, as well as mainly black and white 2D graphics. As well as these features, should you master the game and thwart the plans of Janken worm, then you can unlock a secret bonus stage to further test your dexterity and reflexes. Everything here is nicely presented with a bright and colourful interface and good use of sound. Be warned though, this title within the Dead Fun Pack can only be played by using the touchscreen capability of the Switch. There’s no support for docked play or pro controller utilisation.

Overall, Dead Fun Pack: Penguins and Aliens Strikes Again offers an entertaining, but challenging package. Despite its quirky features of retro-themed levels, there isn’t anything really new that it brings to the table and some people may find it just a tad frustrating in its mechanics. However, if you’re a fan of any of these games’ styles, then I’m sure there’s enough entertainment value to keep you satisfied. Although its presentation may look appealing to a younger audience, its execution and difficulty may be too much for them. As a casual sort of game to fill some time, this is a title that would achieve that. However, in a more long-term setting, its lack of replay value may hamper its appeal. At best, this title contains a series of games that, although good, only offer an experience that’s merely above average.