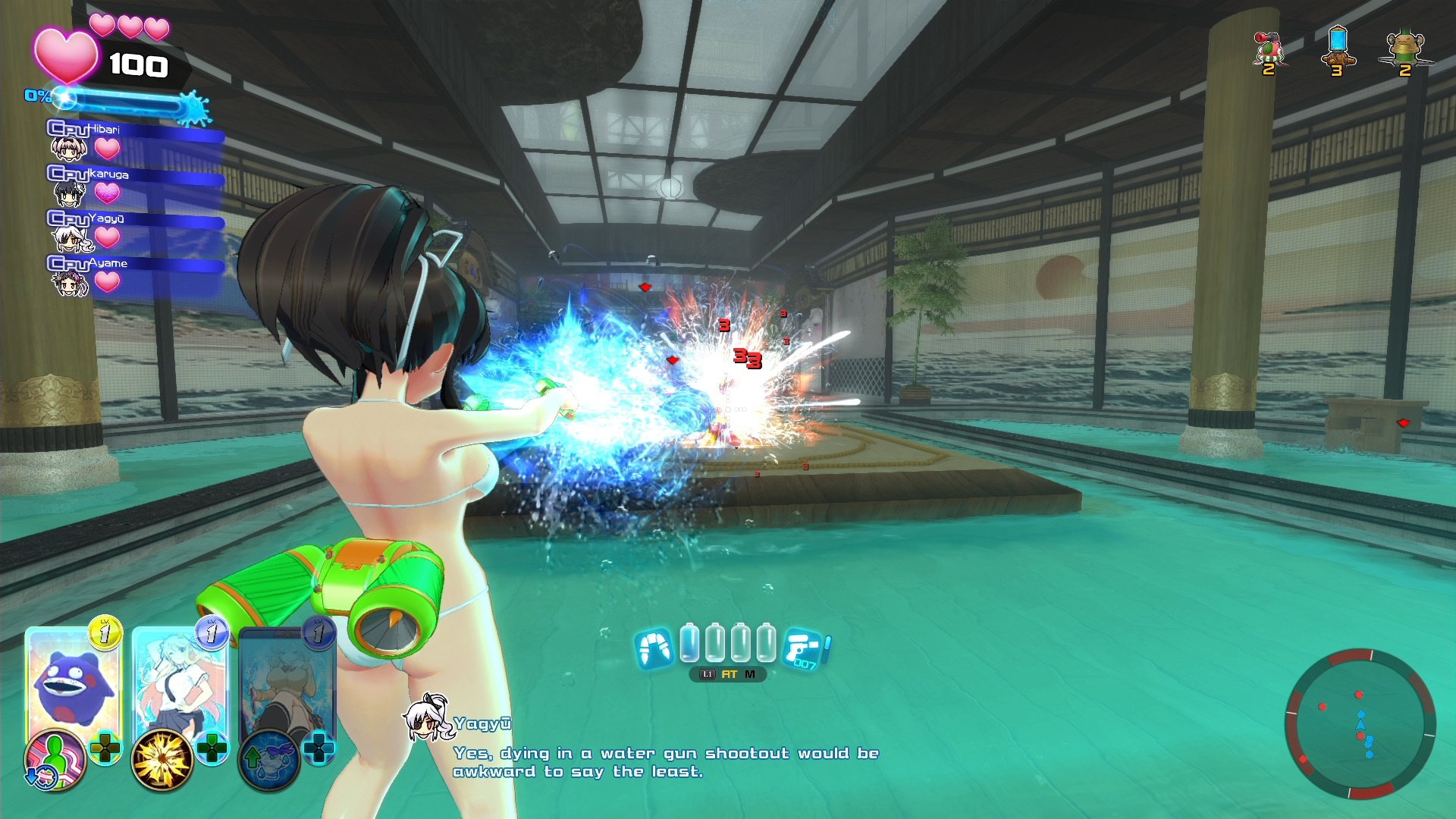 If I had to list my three favorite things it would be video games, boobs and offending the politically correct. Thankfully this week I was able to get all three rolled into one with ‘Senran Kagura: Peach Beach Splash’, a third person arena shooter that replaces assault weapons and armor with water pistols and bikinis. Although I have played one of the Senran Kagura games in the past, I’m not overly familiar with the franchise as a whole. From what I do know PBS is the first title in the series to depart from the straightforward ninja style combat and replace it with a more light hearted water fight competition. This is essentially the ‘Dead or Alive Xtreme’ of the Senran Kagura universe.

The plot revolves around teams of teenage ninjas (from across the various games in the Senran Kagura franchise) taking part in a worldwide super soaker contest. There is a full story mode which consists of around half a dozen chapters, however given the nature of this game the plot does feel very tacked on and unnecessary. I’d probably feel differently if it wasn’t for the fact that the dialogue segments weren’t particularly entertaining and dragged on a bit. Long term fans of the series that are familiar with the characters may appreciate it, but as a relative newcomer I was more interested in the gameplay.

Peach Beach Splash is an attractive game that scores highly on presentation. Although the art style is pretty consistent there are two different animation types between cut scenes and game play. The intro and cut scenes feature traditional style Japanese animation, whereas the gameplay consists of saturated 3D models with filters to help mimic the anime look. The characters are fully voice acted in Japanese with English subtitles (an additional English dialogue track would have been great, but it’s no major loss) and the intro film contains an upbeat, original pop song. The girls all look great and the various arenas vary from decent enough to luscious depending on the theme.

Each round of Peach Beach Splash involves two teams of five girls battling in a combat arena, tooled up with water guns and special ability cards. The object is to hose down as many opponents as possible within the allotted time. Once a girl loses all her energy she is rendered helpless for a few seconds before she respawns, scoring her opponents a point. It is possible to revive a team mate quickly if you can reach them while they are down. 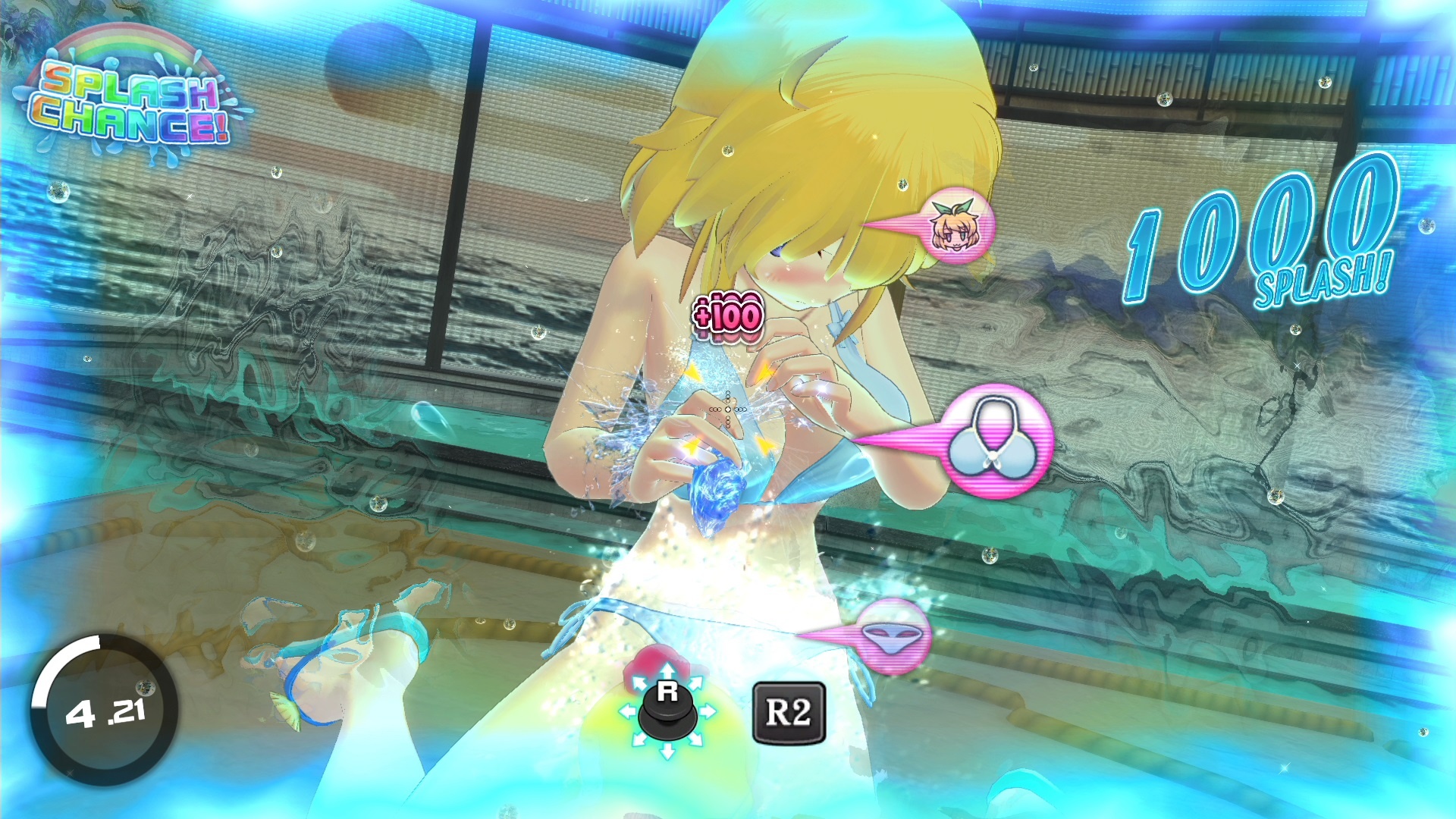 There are various different water guns to choose from which mimic the types of weapons you’d expect to see in a more traditional arena shooter. There are water pistols, water assault rifles, water shotguns, water sniper weapons, water rockets, etc. Each weapon features two different attack modes which can be switched on the fly during the battle. They all have an unlimited supply of water, however weapons do need to be ‘pumped’ on a regular basis to keep up the water pressure (as a novel alternative to reloading).

All the playable girls are very agile and possess a dash ability for quick dodges, a melee attack for close combat, and my personal favorite move being a water powered jet pack which allows players to effectively double jump across arena floors. For me it was a little reminiscent of the gameplay in ‘Saint Row IV’ with the super hero abilities. I found the melee attacks a little tricky to connect with as they can be a bit slow, as a result I tend to just stick to my guns.

There are dozens of characters to choose from, however the differences are largely cosmetic as they all posses very similar abilities. Their melee moves vary in appearance but are all effectively the same. What differentiates each character’s abilities isn’t their personal traits, but the ability cards they are assigned before each round begins. Each character starts the game with their own set of ability cards which includes the type of gun they carry, familiars who can help them in combat, and addition special moves. These can be used occasionally as they require time to charge and include such perks such as shields and cluster bombs. Cards are interchangeable between characters, allowing you to play as different girls while keeping the attacks that you prefer. Winning rounds will earn you additional cards that vary in strength and rarity.

As I mentioned above, I wasn’t particularly gripped by the story mode, however if you’d prefer some uninterrupted action you’d probably appreciate the tournament mode. This is a knockout completion where you have to beat five teams in a row to win a Peach Beach Splash cup. Like Mario Kart there are different cups to choose from that vary in difficulty, however the harder modes require unlocking by progressively beating the easier ones. Each round you win will earn you a pack of ability cards as well as some tokens that can be spent on dressing room outfits (more on those later).

Peach Beach Splash is a fast paced shooter and a lot of fun in short bursts, however the single player modes do lack a bit in variety and can get a bit repetitive over time. If you enjoy arena shooters then there is plenty to grind and unlock, however the widest variety of game play modes actually appears in the online multiplayer. In multiplayer you can choose to play in smaller teams if you prefer, there are a few different methods of scoring that don’t seem to feature in single player, and since the game has been updated there is now a ‘capture the flag’ style mode. 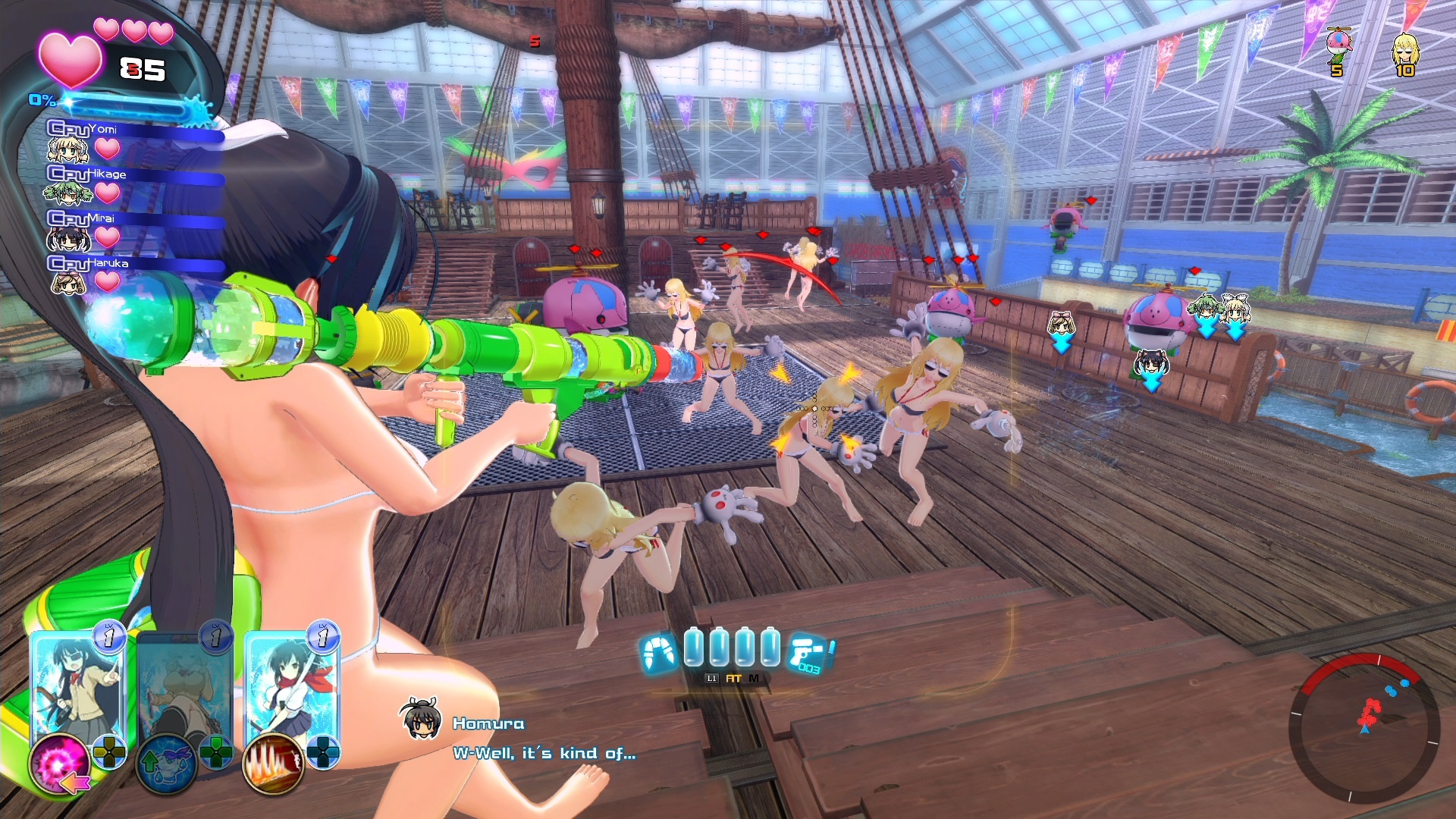 If you need a short break from the water blasting action then you can always spend some time in the dressing room. Dressing room mode allows players to have some personal time with the girls of their choice. You can buy them outfits, dress them up, style and colour their hair, etc. There is also a petting / grooming feature that allows you to virtually grope and fondle the girls as well as squirt them with water. This mode isn’t essential for progression, but if you’re into this kind of thing then you can access it at any time form the main menu.

Overall I’m really happy with Peach Beach Splash. It’s not a game I can sink days of time into, but it’s still a fun blast that I can easily pick and play. Having said that, there were a few areas that I felt that could be improved upon. One small gripe was that I did notice a few patches of frame rate drop from time to time. I guess some stages were a little more intense on the PS4 hardware than others. Having said that I was playing on a standard PS4 so the PS4 Pro may handle things a little smoother. It didn’t happen too often and wasn’t a major issue, but obviously I would have preferred a more consistent frame rate.

However, if there is one thing about this game (or this series as a matter of fact) that I would like to see changed, it relates to the finishing moves. One feature of this game that I’ve omitted to discuss up until now is the manner in which you can finish an opponent off when they are down. If you approach them while they are on the floor you can play a mini game where you can squirt either their bikini top or panties clean off, exposing their bodies with their genitals censored by a bright light.

To all the developers behind the Senran Kagura series, seriously, the censoring has to go! Or, at the very least, give players the option to play this game uncensored. As far as I’m aware the censoring is present in all regions which is a real shame. PBS is essentially a soft porn title as it stands and has a mature rating, so why push the envelope so far without going fully hardcore? If this game was taken to its logical conclusion each round would start with all the girls in their bikinis and by the end there would be teams of naked ninjas splashing around the arenas. Censoring aside, Peach Beach is pretty decent. I’ll certainly be playing more of it in the coming weeks and will be keeping an eye on the series to see where it evolves from here.