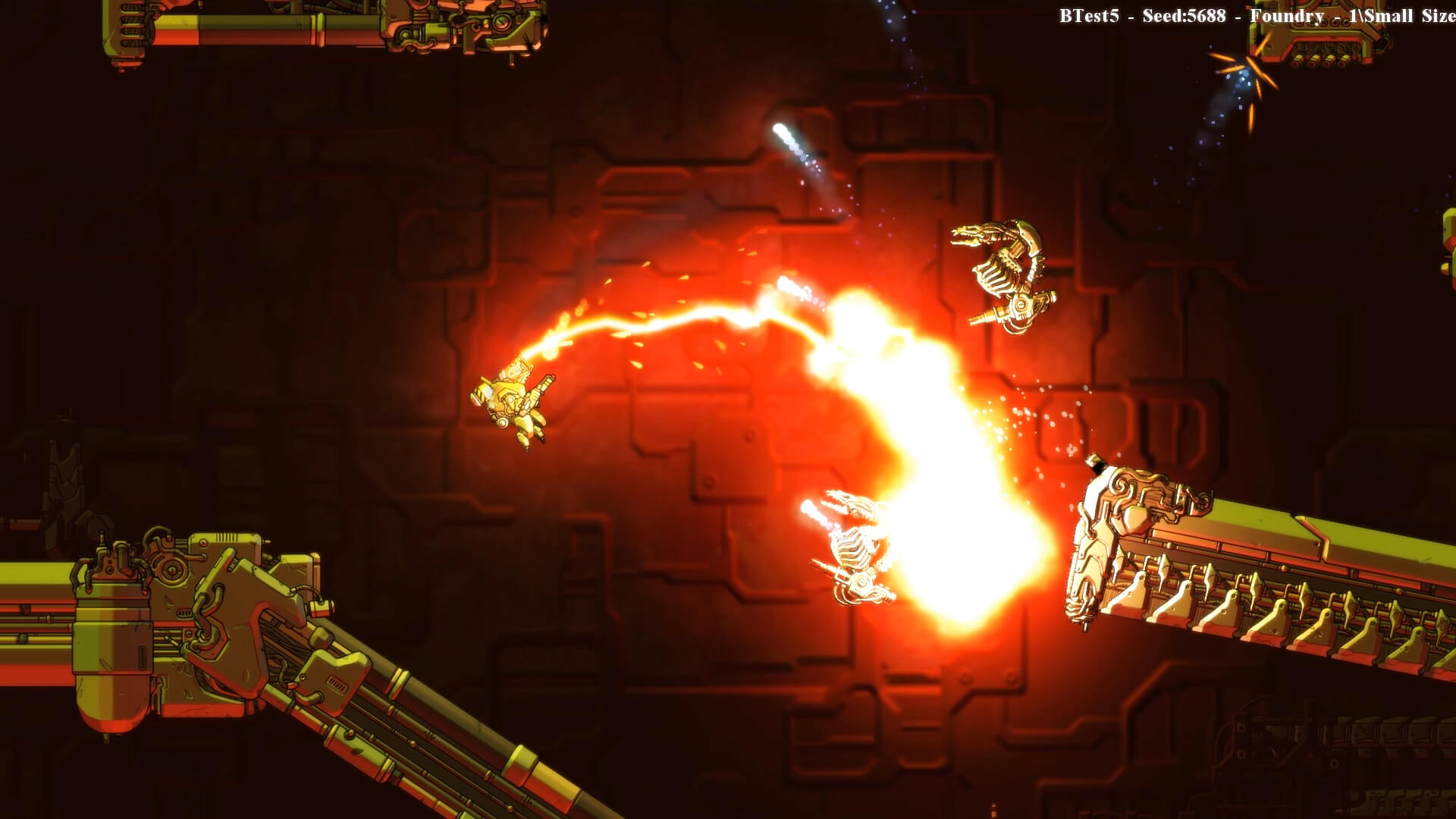 Cryptark is a sci-fi roguelike in which you comb derelict ships for xerotechnology and fighting off the various life forms that defend it. The controls are fluid and gameplay is fast-paced, but a heavy reliance on RNG combined with the way traps synergize makes for a frustrating experience.

Cryptark offers three modes of play: campaign, rogue, and co-op. In campaign, you operate under the premise that you’ve been given your ship and crew with the condition that you make money for your benefactor/investor by looting a well known ship called the Cryptark. You’re given a lump sum of money and your challenge becomes keeping your funds out of the red while also staying alive through the course of four pit stops at other ships before you even get to see the Crtyptark. More on that later.

Rogue Mode does away with the financial limitations, but that also means that once your suit loses all its shields, that’s it. Your run ends. Co-Op is local only and it follows the same guidelines as Rogue.

In either game mode, you must run the gauntlet of five derelict ships, each bristling with more defenses than the one preceding it. In Rogue, you are given a ship at random, but the campaign gives you a selection of four possible ships per node, each with a helpful list of enemies and traps found within. The game does a great job of feeding you information and every icon has a tooltip. After you’ve selected the ship you want to raid, you’re able to choose your loadout. 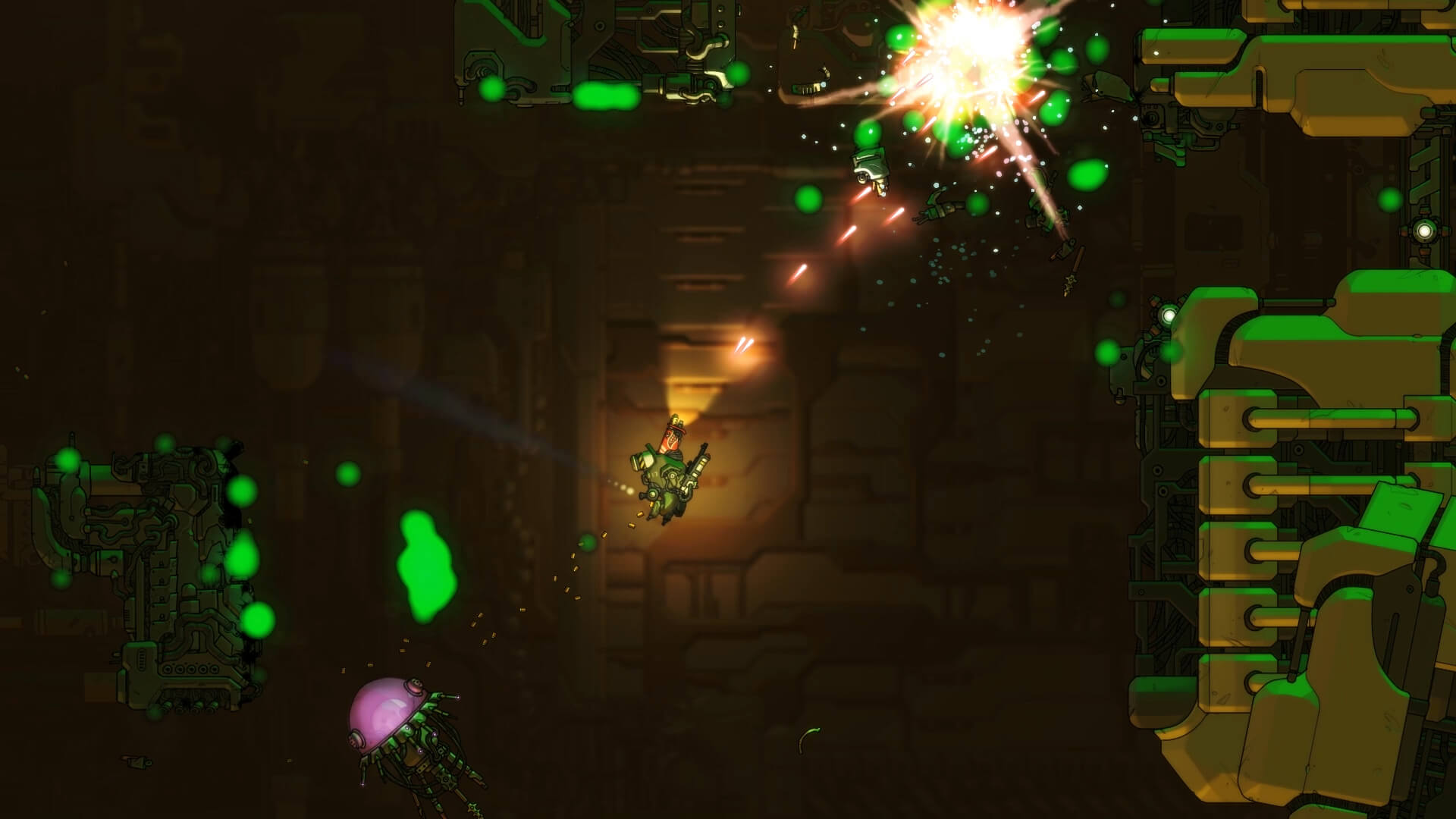 Your suit is capable of supporting four equipment types–a primary weapon, a grenade, a melee attack, and a shield–as well as four consumable items. Each piece of equipment costs a set amount and can be modified to have more charges or ammo for an additional cost. You can also reinforce your suit’s durability. Different suits, each with their own drawbacks and benefits, can be unlocked by finding artifacts during normal play. You can also find technology during your runs, which will open up more loadout options.

As with all roguelikes, Cryptark’s gameplay is risk vs reward. Each level has a bonus objective which will make survival more difficult in exchange for a greater payout. Your main objective is to destroy the ship’s core, before which you’ll need to take down the cores defenses. A map is provided barring special circumstances and enemies, collectibles, and traps are marked on it. This is where you run into one of the game’s largest flaws: traps are randomly generated and tend to synergize in frustrating ways.

For example, a repair station will regenerate the health of the last defense you destroyed. Often times, repair stations and factories, which generate enemies whenever a predetermined amount of time passes, and shields are positioned far apart. Meaning that the factory will churn out several enemies that will wear down your shields and make it difficult to take down the shield trap which is protecting the repair trap from any damage. Anytime there is a repair trap involved, Cryptark becomes a race to destroy targets rather than a methodical room by room exploration. It gets increasingly frustrating particularly when shield’s protect multiple targets because when paired with a repair trap, it becomes almost impossible to make any headway. 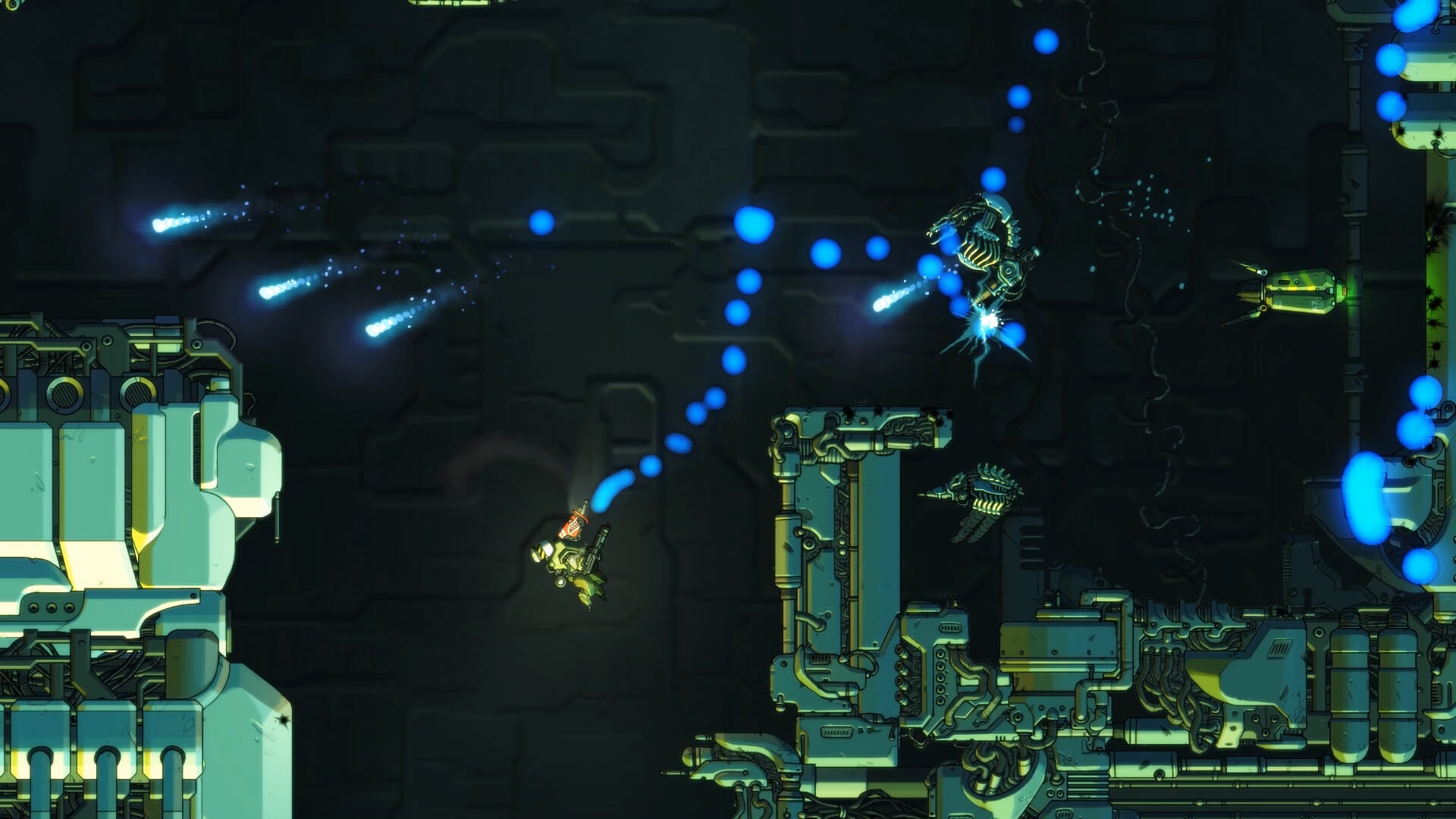 Periodically, you’ll find little stations like the one above, which can be hacked by hitting directional buttons in the right sequence. These contain useful items. You’ll also stumble upon amo crates and shield repair stations, which cost cash to use.

The game relies very heavily on the RNG and depending on your luck, it can take several runs to make any progress. The tech you unlock does not carry over to subsequent runs and your basic equipment won’t make a dent in large swarms of enemies. To add insult to injury, there is no way to save and quit in the middle of a run. It must be completed in one go or you lose all your progress. There’s also no option to play from a seed, meaning that if you happen to like a sequence of ships and want to attempt them again, you’re out of luck.

Cryptark’s atmosphere is strong. Ship’s a bristling with high tech contraptions and monstrous alien lifeforms. The OST consists of uptempo electronic which makes for an excellent soundtracks to gunning down your targets. Little details like muffling the music when you exit the ship are a nice touch as well.