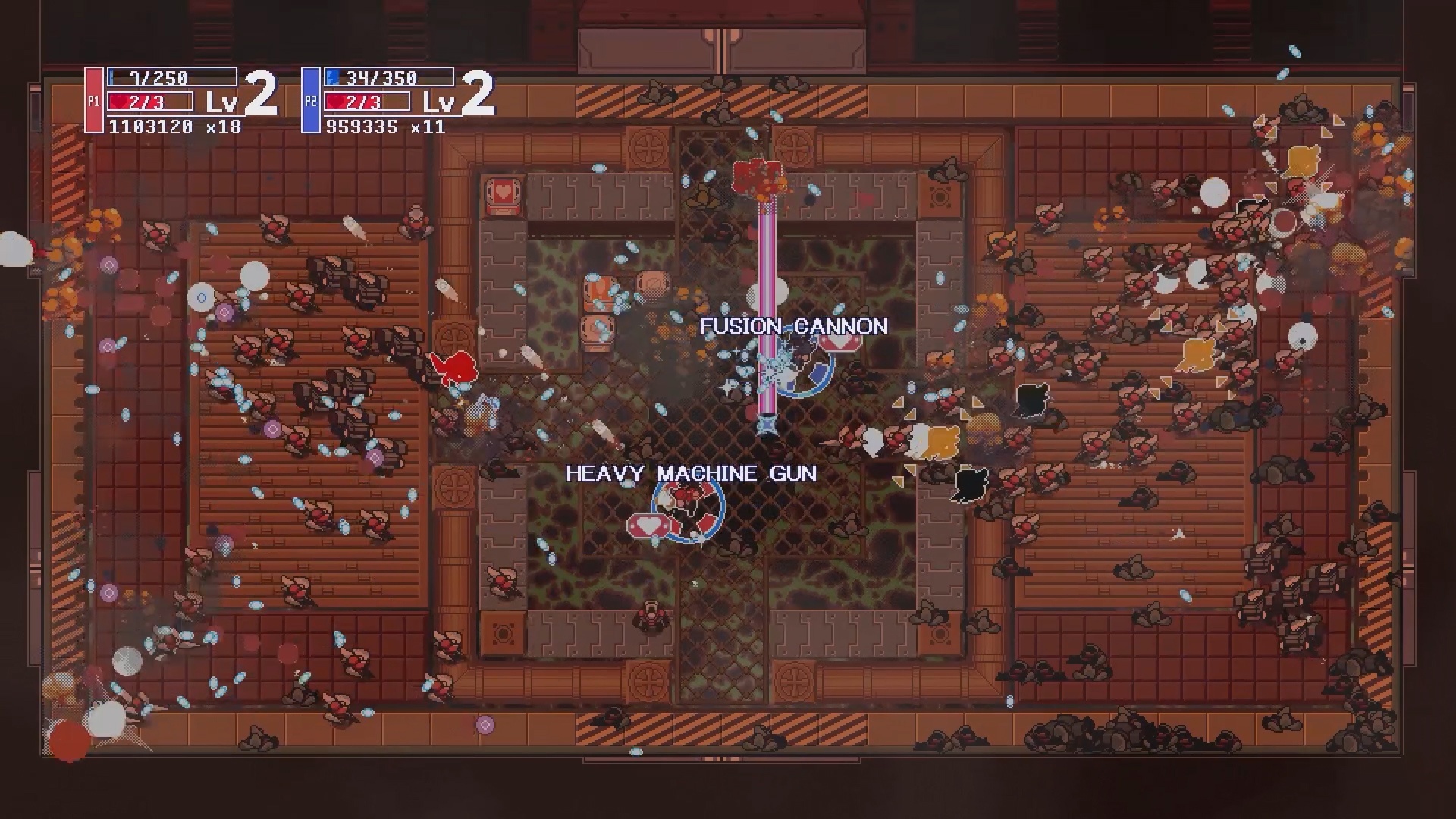 Circuit Breakers is a pretty unremarkable game. It’s a very basic twin stick shooter with 16 bit style graphics, a linear structure, little variety, no originality and zero innovation, yet I strangely enjoy it quite a lot!

When you first boot up the game you begin a little tutorial which is over in the blink of an eye. First you are taught to move with the left stick, then you are taught to shoot with the right stick, and finally you are taught to shield yourself with the left trigger. That’s it! It’s all over within seconds and you are free to begin the main campaign. Personally I love how this approach cuts straight to the action, however it does highlight how shallow this game is when it comes to mechanics.

The gameplay is very reminiscent of the famous arcade hit Smash T.V. Each room you enter has a number of different perimeter doors that attack robots flood in from. You are left to defend yourself for a few minutes before an escape door opens allowing you to exit to the next room. Each room varies in shape and design, with later levels featuring environmental hazards such as conveyor belts and other machinery. There is no indication on-screen as to how long a stage lasts for, but the exit door seems to open immediately after the last wave of enemies spawns in.

When you first begin there are five characters to choose from (with a few more that can be unlocked later on) who each posses a different weapon. It’s the weapons that make each character unique as any other difference is purely cosmetic. All other stats from speed to health all seem to be consistent across the board. All characters can shoot in 8 directions (no full 360 degree analogue shooting which is a bit of a shame), with some weapons having strange side effects such as the chain gun that causes your character to slowly move backwards due to the recoil. 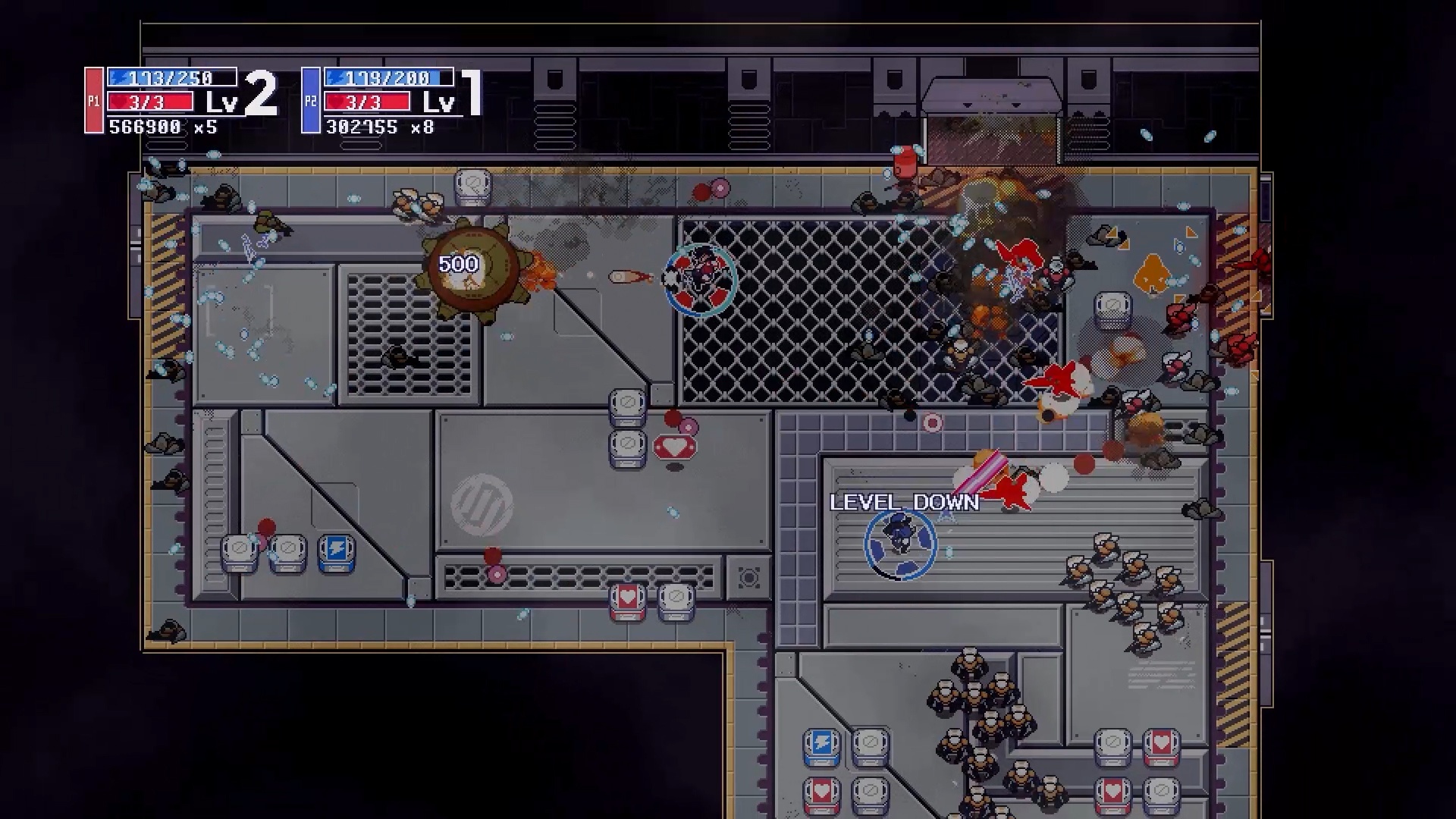 The only factor that I could identify that makes Circuit Breakers somewhat unique is it’s power up / ammo system. Weapons have an unlimited supply of ammo, however killing enemies and busting open ammo creates will release what appear to be some sort of glass shards or confetti. Collecting it will fuel your power meter allowing your weapon to level up, increasing your rate of fire, field of attacks and all manner of other factors. As the power meter grows your weapon becomes more powerful, however as you fire the weapon the meter begins to drain. How you allow this mechanic to influence your play style is up to you? You can keep on firing consistently with a low-level weapon, however if you are conservative with your ammo and only fire in bursts then it’s possible to make your attacks stronger over time.

Like Smash T.V. most of the enemies are predominantly harmless on their own as they are rather weak and do not possess a lot of fire power. However, they do tend to travel in packs and can easily flood smaller rooms if you are not quick enough on the draw. Sharp shooting and crowd control are essential to keep you out of harm’s way. As you proceed deeper into the game you begin to encounter tankier enemies so you’ll need to priorities who you tackle first.

Every 10th room features a boss which is usually a large mechanical structure with a lot of armor. After you’ve beaten it the next set of stages will change in location and setting, which will normally include its own unique set of stage hazards to watch out for. Although the themes of the stages change its little more than a pallet swap with the action remaining consistent throughout.

You begin each game with a handful of lives. You can take three hits per life but once you’ve used them all up it’s ‘Game Over’. There is no saving or continuing. Once you’ve died you’ll have to start from the beginning again and the levels do not vary or generate procedurally. It’s reminiscent of the classic retro titles where you become overly familiar with the early levels as you have to beat them repeatedly in order to make any progress. I actually don’t think this is a bad thing every now and again as I’m so used to games where you can fail an unlimited number of times and always start a session again from where you left off. 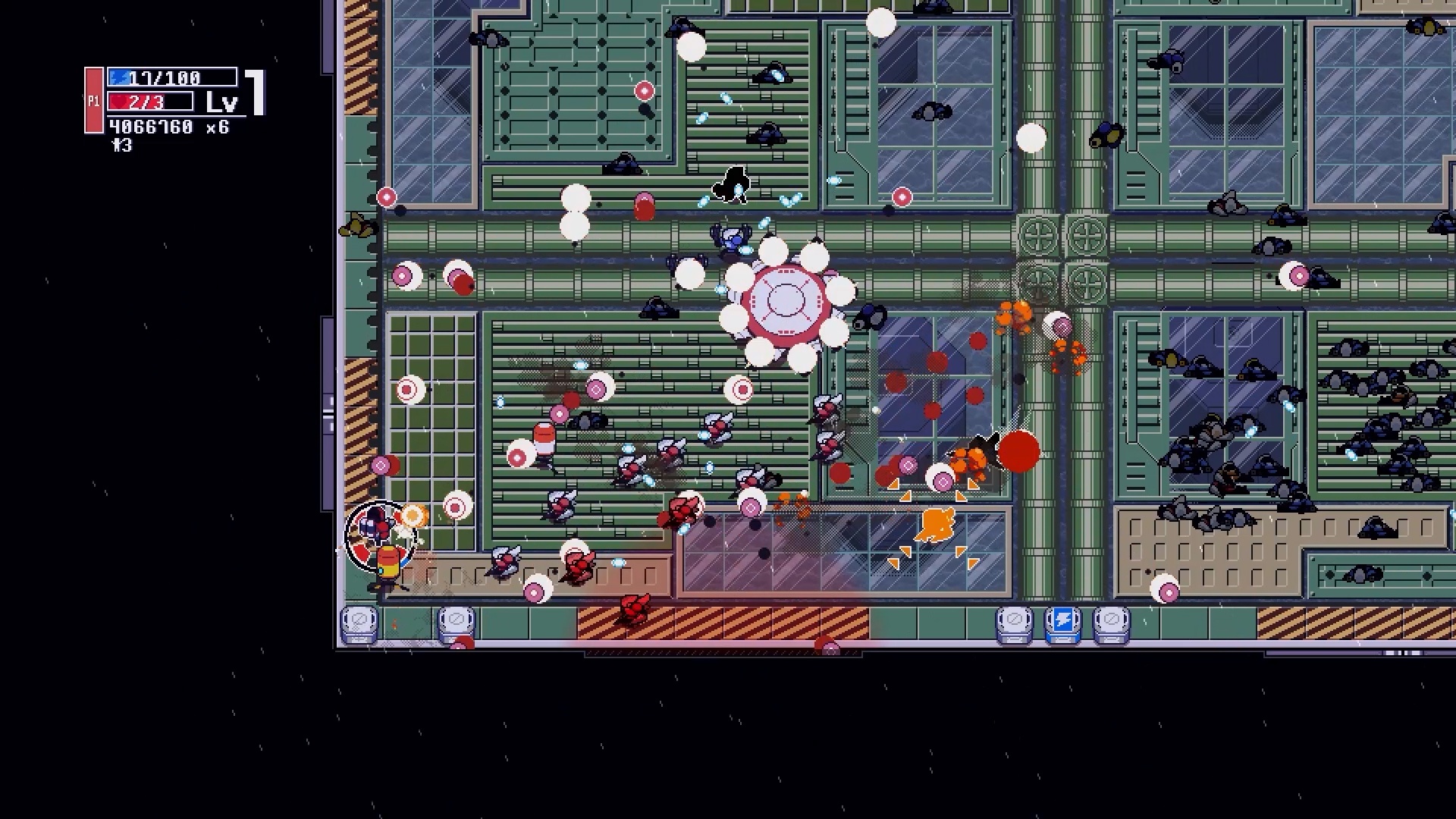 Circuit Breakers features two different game modes. Arcade mode is the main campaign where you play through all the rooms in sequence in an attempt to get as far through as you possibly can. In score attack mode you can choose a portion of the game to play and the aim is to rack up as many points as quickly as possible. This was a nice distraction and a good change of pace, but personally I preferred the endurance of the Arcade mode.

Progress is made via what appear to be bingo style cards that contain a number of different objectives for each character. These range from the number of bosses each character has defeated, the number of rooms completed, the amount of bullets fired etc. These can be a little grindy but if you enjoy this style of game they give you the excuse to keep on replaying it and experiment with the various characters.

From a presentation point of view this game doesn’t look bad, but it doesn’t look particularly special either. The sprites are very limited when it comes to their frames of animation and the environments are all recognisable, if a little flat. From a technical standpoint I encounter no bugs, crashes or other issues throughout my time playing it.

If you have a fondness for games such as Smash T.V. then I think Circuit Breakers is well worth the asking price. If you are looking for something with a touch more scope then you’re probably better off taking a look at ‘Enter the Gungeon’ or ‘Iron Crypticle‘. However if you want something light and straightforward then Circuit Breakers isn’t a bad choice.