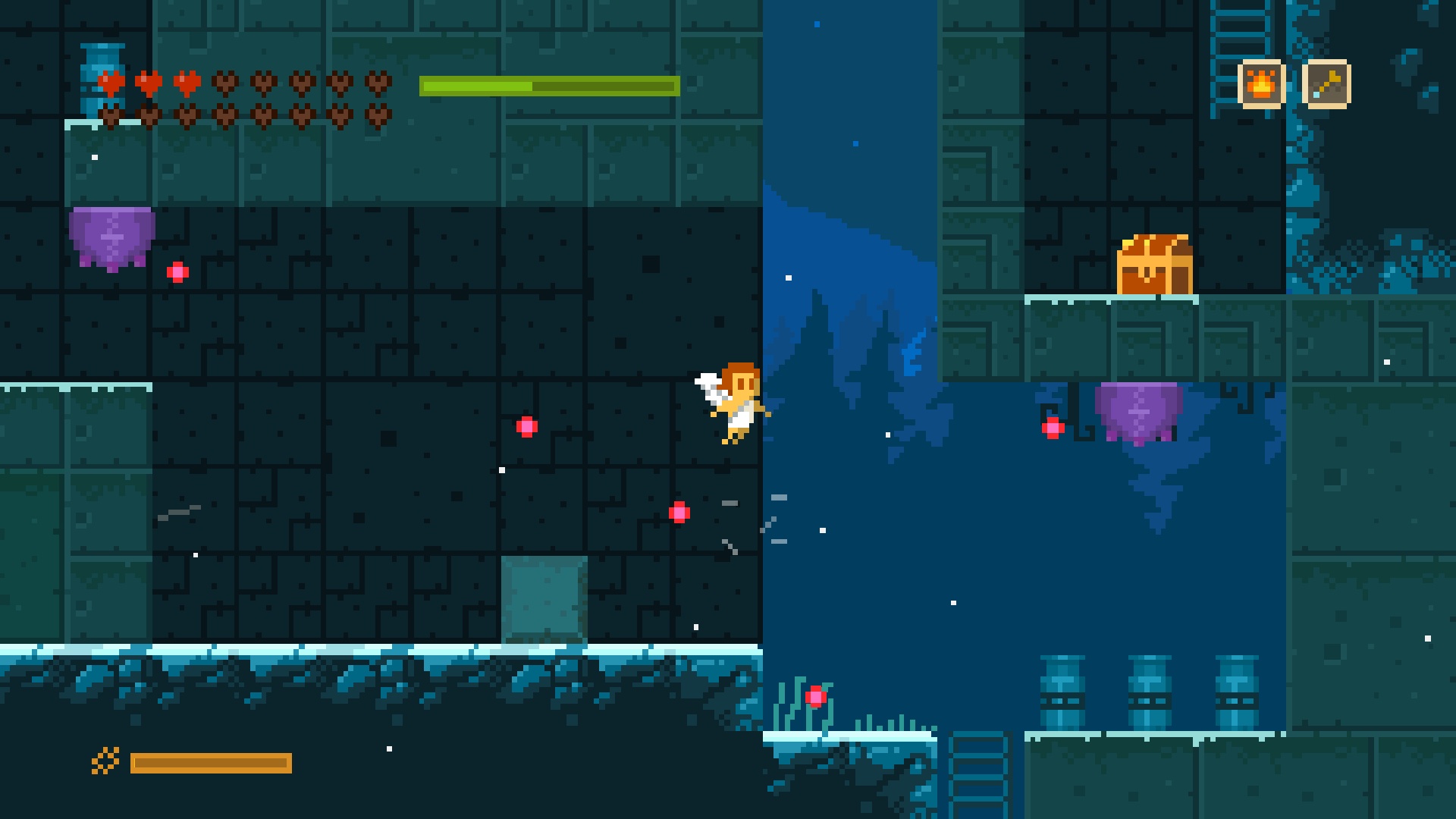 It’s always a cool feeling to get more than you bargained for when it’s something you want. If the local ice cream parlor is doing free triple scoops for the price of a double (actually a thing that happens every summer here), it’s freaking awesome, and you make room for the third flavor of ice cream. But when it’s something you didn’t want in the first place, it’s simply awful. A fifth page of homework, another hour of unpaid overtime. So, when a game goes on for much longer than you had thought it would, you hope that it’s something that you want to keep playing.

Elliot Quest is a rather unusual title for a slightly unusual game. You play the titular Elliot, who is cursed to turn into a demon in a matter of time. His only hope to not become a demon is for a fabled Guardian to reveal itself and help cure him, but Guardians haven’t been seen for a long time. Elliot also cannot die, despite his own best attempts, so that’s not really an option. Armed with his trusty bow and some cryptic advice from a Sage, Elliot is determined to try and change his fate at any cost. Again, the storyline isn’t exactly the newest concept that’s ever graced video games (not even on the Switch), but it’s solid and helps lend itself a bit to the surprise of the game.

If you enjoy faithful retro interpretations of games, then you’ll enjoy Elliot Quest right out the gate. The icon and cover art would lead you to believe in something pixel and epic and you get something…pixel. Elliot is a rather piddly, unassuming hero when the game starts, really little more than a mass in a toga, and he doesn’t strike me as someone I’d root for. The enemies also come across as simple at first, with things like slimes, owls and a dude with a frog jar being your biggest obstacles. Interestingly, the enemies certainly change and get bigger (as well as harder), but I never felt like the scope or scale of the game got much larger. Don’t get me wrong, the map that you traverse lets you see that Elliot has to cover a bit of ground, but the way the game proportions itself out always made it feel like it belonged on the NES, very minute in nature. 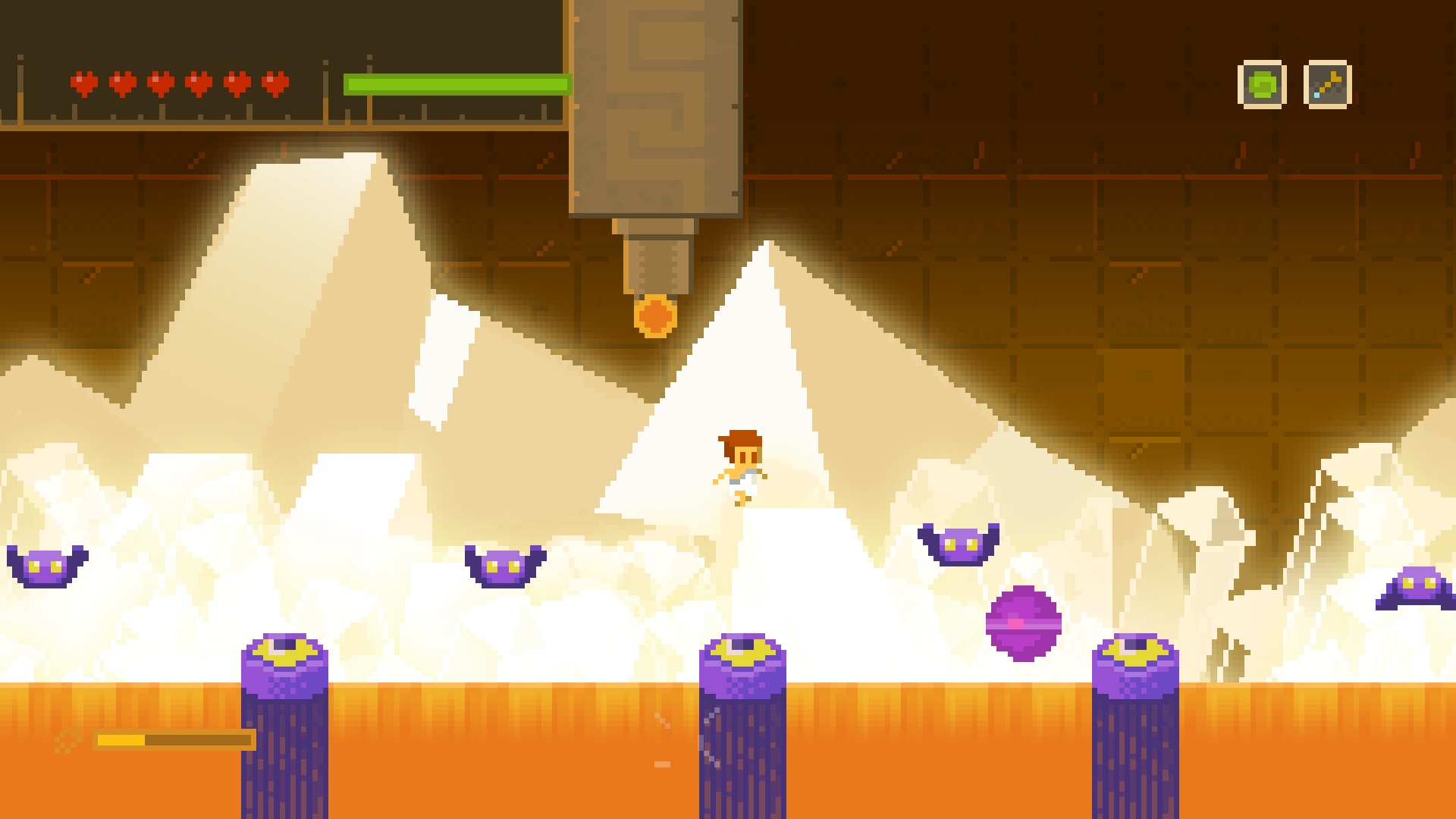 Elliot Quest plays like an 8-bit adventure RPG would, with you running around on 2D levels, finding coins and secrets and shooting enemies in the face. I didn’t realize there was a level up system until I got a notification by chance, and I was pleasantly surprised to find that Elliot can add points to one of five stats in order to make himself more worthwhile. With a little experimentation, I found you could gain multiple levels without leaving the first world by simply walking in and out of the rooms. If you’re a fan of grinding and bulking up preemptively, then Elliot Quest can oblige. I got to level five before I even ventured out, and having faster and stronger arrows (perceptively) made moving forward easier. In fact, leveling up and getting better utilization of my character always seemed to be key in moving forward which, as we know, is fundamental in RPGs.

The nice part is, in spite of the retro feeling and the very strong purity to staying in the style, Elliot Quest does, for the most part, use updated controls and response, which was a slaying point to many an older NES era games. Things feel tight, which is a phrase I use a lot but use in earnest: if I don’t feel like I can control a character, I can’t play a game (unless not controlling them is part of the game). Elliot is pretty spot on with his shots and jumps, and I actually was a bit mad when an upgrade to my character made my arrows stop falling with gravity, because I had grown accustomed to leading my targets. Once you are able to unlock other abilities, such as double jumping or a fairy guide that can both activate doors and scout the area, Elliot starts to come into his own, and the game really opens itself up. These added abilities also create a metrovania environment in which doubling back can be to your advantage (and, sometimes, a necessity) to finding new secrets and even more abilities. By the time you reach the end, Elliot has transformed into something else, though, in the core of it, he looks and remains the same.

The game is hard, though, and I don’t say that necessarily in a loving way. While the beginning is straightforward and simple, it didn’t feel like there was a curve to the difficulty, but a sudden spike that never tapers off. You go from gentle damage that can add up to being instantly killed when you encounter the wrong situation. The abilities you unlock are crucial to your forward movement, but it’s not always clear if you’ve already gotten what you need or if something is still forgotten several areas back. The NPCs that you encounter do very little to help you in terms of direction or aim, and you end up doing what everyone did in the NES era: having to ask for help from friends or professionals (thanks, GameFAQs!) to figure out what you need to do next. I can’t tell if the momentary lapses in cohesion are intentional or simply broken moments that shine out as something that unironically also captures the bad with the good of yesteryear. 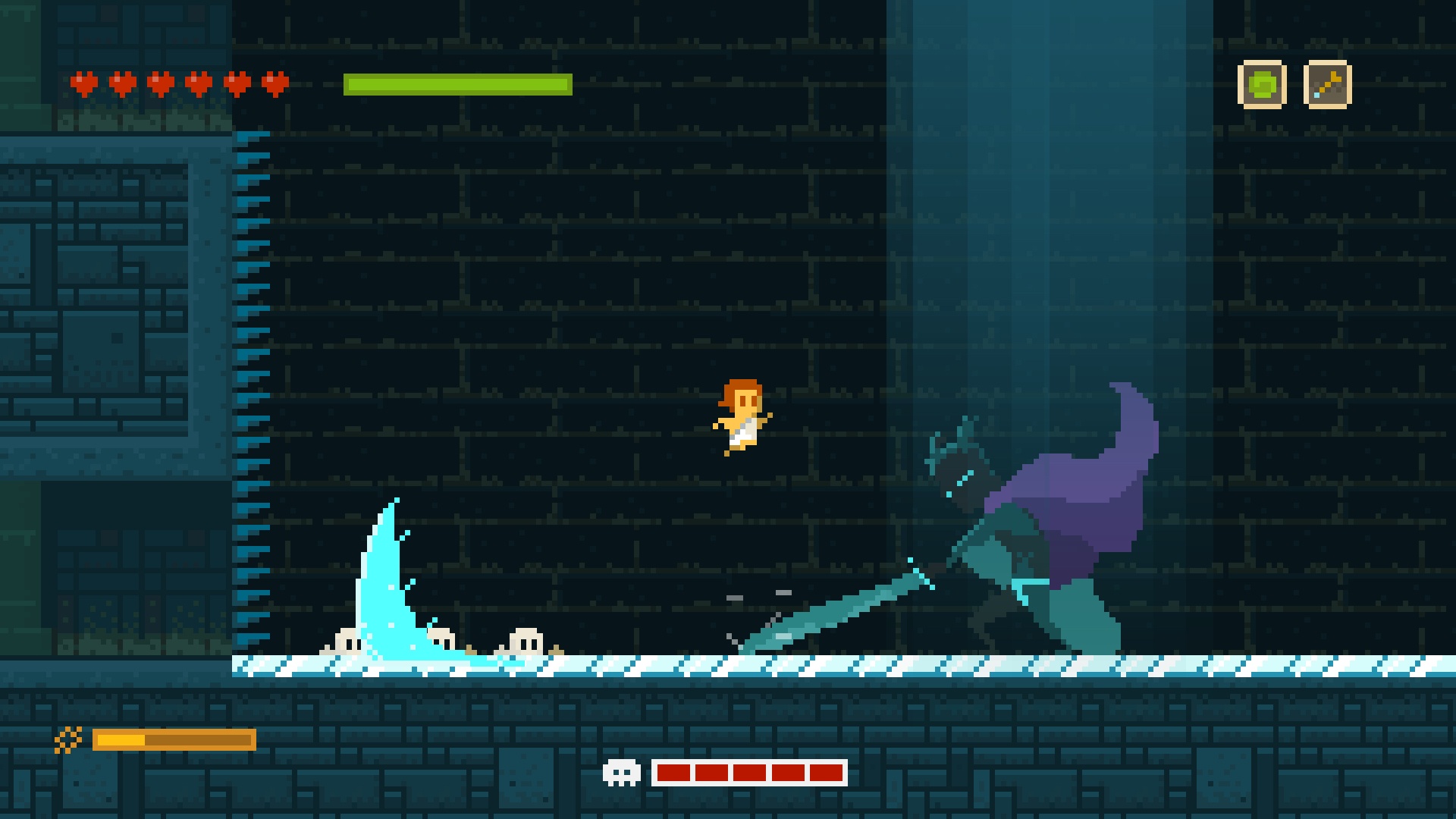 As I mentioned up top, more of something can be good or bad, and Elliot Quest is both long and complex, especially with a handful of endings. I ended up getting the “Neutral” ending, because sometimes morality is as easy as following an arrow, but other times I simply needed to make a choice that benefited me best. I’m curious as to what the Good or Evil endings might look like, but I already put a LOT of time into Elliot Quest. Like, somewhere around 15 hours. I don’t remember if it took that long to beat The Adventure of Link, but it didn’t feel that long when I was eight years old. Still, the art and the soundtrack do their best to put me back into that era and that mindset, but the awareness that I’m playing a modern day game, combined with a very vocal and (understandably) distraught hero keeps me firmly in the present.

As we wait patiently for Nintendo to finally open the floodgates to their classics, it’s nice to have solid homages in place for players to have the feeling and the intention of the old generation. Elliot Quest has some shortcomings – it’s rough, it’s long, there’s a bit of “woe is me” going on – but it does so unabashedly. Having a good character build makes all the difference, and Elliot is a beast when he’s in his element. If you want to see what it could be like had Link been blessed with better controls and a working voice box, then Elliot may be your next unassuming hero.