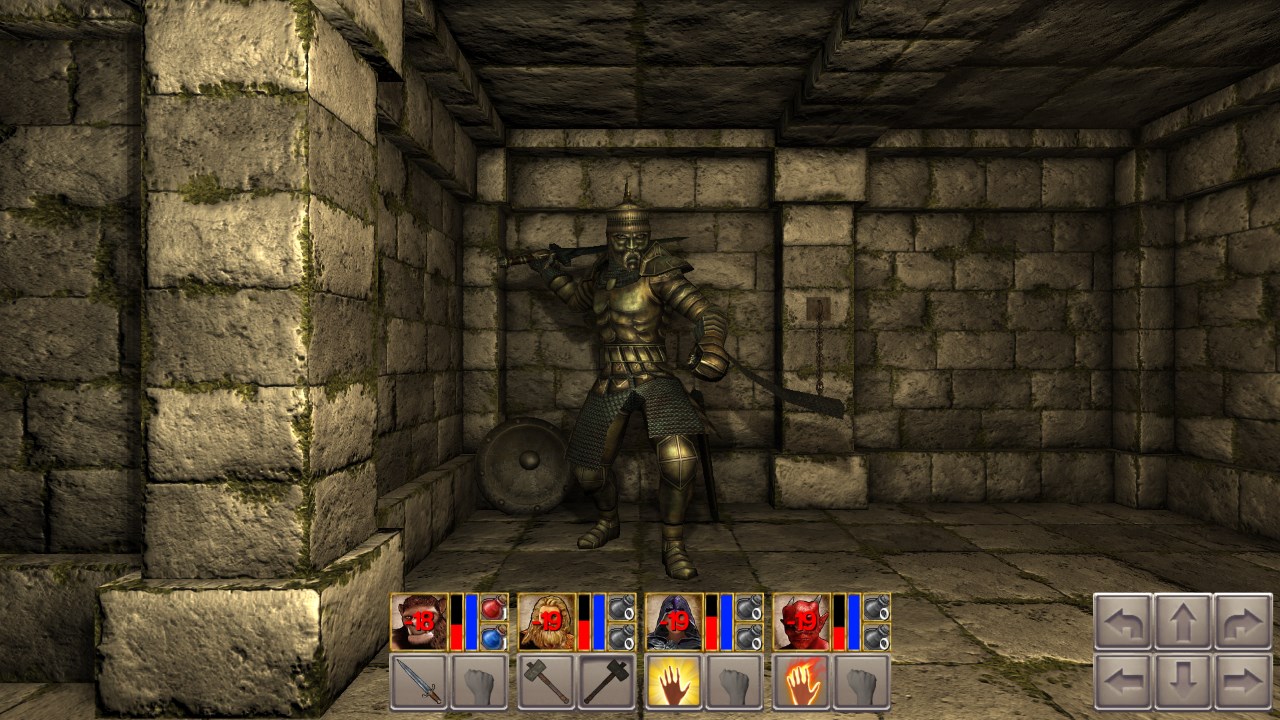 The adage of “if it’s not broke, don’t fix it” really needs to be handled carefully when it comes to video games. Just because you hit upon a winning formula once doesn’t mean that it’ll be compelling, interesting or even fun the second or third time around. I mean, I don’t think anyone should take the Dead Space route and throw the baby out with the bathwater, but carefully examining and shaping a game as it comes is incredibly important. I’ve played a lot of innovative takes on the dungeon crawler genre in recent memory, from Moero Chronicles to even a bit of Vaporum in my freetime. Unfortunately, those might be why Heroes of the Monkey Tavern just felt flat in my mind.

Heroes of the Monkey Tavern is a novel enough concept that begins with a troupe of heroes drinking themselves broke at the aforenamed Monkey Tavern. Having sold all their equipment to continue their partying, the heroes overhear someone mention where they can get coin and treasure and, not wanting to lose their buzz, immediately head into unknown danger to score some loot. It’s not exactly the most endearing or noble quest, but it’s damn honest, and it has a touch of humor throughout as a result.

If you’re a fan of really classic Dungeons and Dragons setups, then you’ll feel right at home here. The classes are all fairly familiar (warrior, rogue, etc.) and you can distribute stat points before diving into the dungeon. You also can set the difficulty level, which, personally, I recommend doing easy at least your first time through. This isn’t because the game itself is crazy difficult, but because it does take a bit of getting used to the controls of the game. The developers have been very kind in having a clean, concise control map right at the beginning of the game, but reading something and putting it into practice are two very different things. 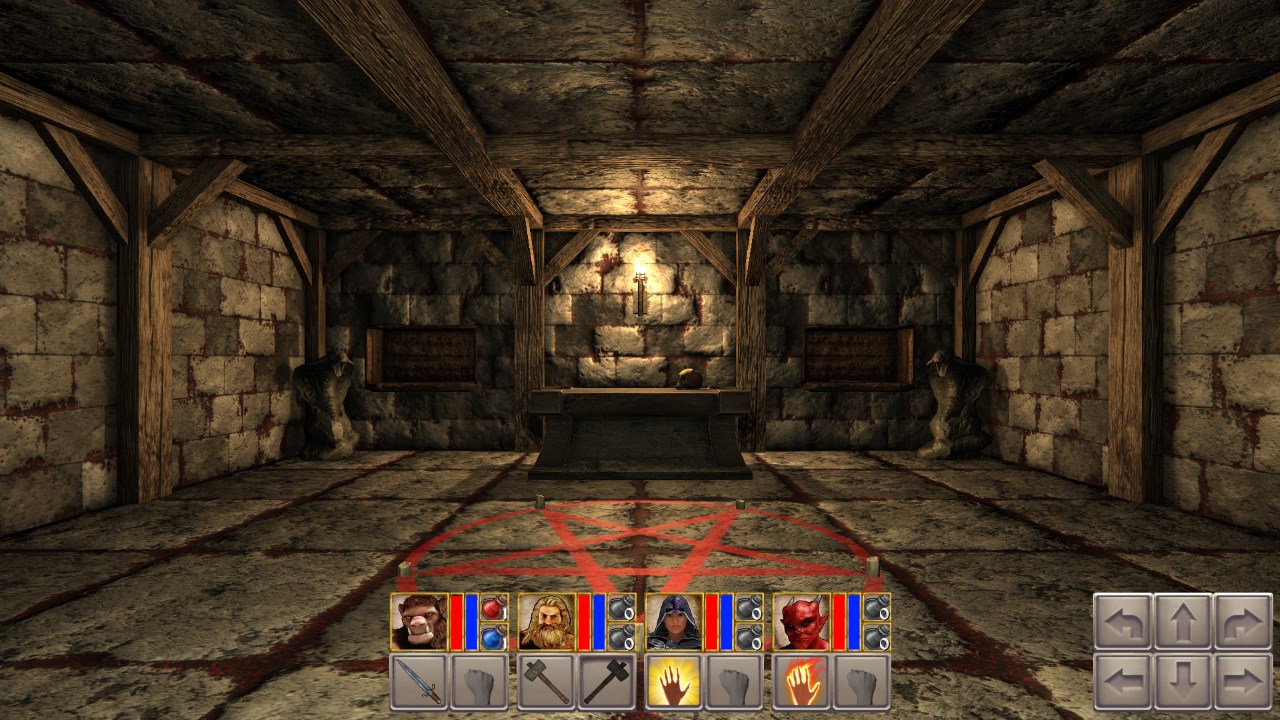 For example, you don’t use the directional stick except for potions. Movement is done with the c buttons, which feels so weird and archaic to me. Once you get over that, you realize that the c buttons move you while always facing forward, and it’s up to the shoulder buttons to turn. But make sure to hit the right shoulder buttons or you just cycle through your heroes. Then, when you’re in the dungeons, there’s two separate buttons for action and attack. Hitting action instead of attack means you’ll chug a potion you don’t need while a massive statue is beating you to death. Hitting attack instead of action means you punch the wall and hurt yourself. And if you turn when you mean to rotate heroes, you then get penalized for fleeing a battle in the way of everyone in your party suffering damage.

Once you get your head around it, it’s not a bad little setup. The map is pretty large, and there’s a good number of secrets and traps right out the gate. You’ll find weapons and armor almost immediately, and it’s up to you to pick a favorite child to dress up to best avoid sudden death this early. Heroes of the Monkey Tavern gives you a short amount of time to adjust to your general play before it drops the first monster on you, and God help you if you chose not to have someone with healing magic in your party. Even on easy, the average monster is TOUGH. They take a lot of hits, strike hard and, best (worst?) of all, move in real time combat. So while you’re flipping through your party, frantically trying to figure who should go next and if someone needs assistance ASAP, the venomous snake or giant spider is taking several large bites out of your barely armored hide.

The graphics are fairly decent, especially in comparison to some other dungeon crawlers that I’ve played (Dungeons and Darkness takes the cake for worst recent setup). I loved how the walls and flooring looked, and it was both easy and satisfying to discover which walls had secrets hidden behind them and which were traps. Items were diverse enough, and the selection of avatars for the players were of different races and species, even though it had no impact on the character at all (as far as I could tell). The monsters in Heroes of the Monkey Tavern are some classic 70s fantasy designs with updated colors and curves to make them look proper and realistic, if such a thing can be said about elder beasts. In fact, thinking more about it, it’s probably one of the best looking “pure” dungeon crawlers that I’ve played in recent memory. If classic style is your thing, dig in with both hands, it’s wonderful. 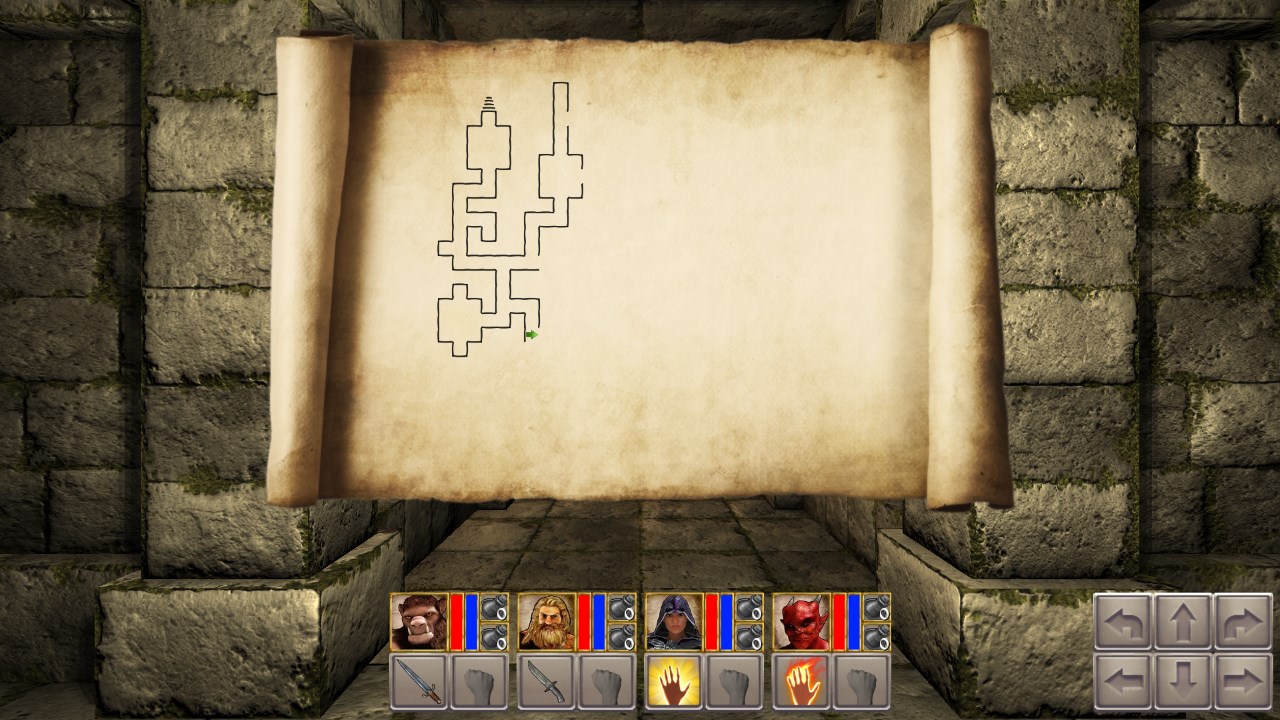 One word of caution I’ll say of Heroes of the Monkey Tavern is the game length. If you’re playing through for the first time, it might take you a few hours, even on easy, to get adjusted to what the game expects of you and what you should be doing, but then you’ll gain momentum and the last hour of the game seems to fly by. Then you eagerly want to go back and replay on a higher difficulty and…it’s over before you know it. Taking away my missteps and poor decision making, the entire journey was probably no more than ten hours. If I had to Tolkien the length, you could finish the game about when you get through the third movie marathoning the LotR trilogy. But that’s not always a bad thing. After all, you’re a group of four glory seekers who want cash to stay drunk. That doesn’t seem like it should take days upon days. Part of the replay value is definitely also trying different combinations to see who can survive and get all the way to the final boss (who looks pretty dope, I must say). If you want it mostly easier, have one healer support three barbarians. If you hate yourself, four elementalists should do the trick.

This is an interesting piece to land on the Nintendo Switch. Heroes of the Monkey Tavern fills a niche that I didn’t even realize was vacant, but I can’t say for certain it’s the best candidate for the job. I like it better than, say, Legend of Grimrock, but I still have a soft spot for classics like Eye of the Beholder. If there is one serious piece of advice I’d give, it would be change the game icon. Players take it seriously and the Switch icon is this stark white background with a drunk monkey on it. It could look so much better, and it’s a petty little turnoff that makes me less apt to fire it up. Add some texture and color and it’ll be more appealing. And, for the fans of dungeon crawlers who want a brass tacks experience, it’s time to go empty your coin purse and go questin’ for beer money.