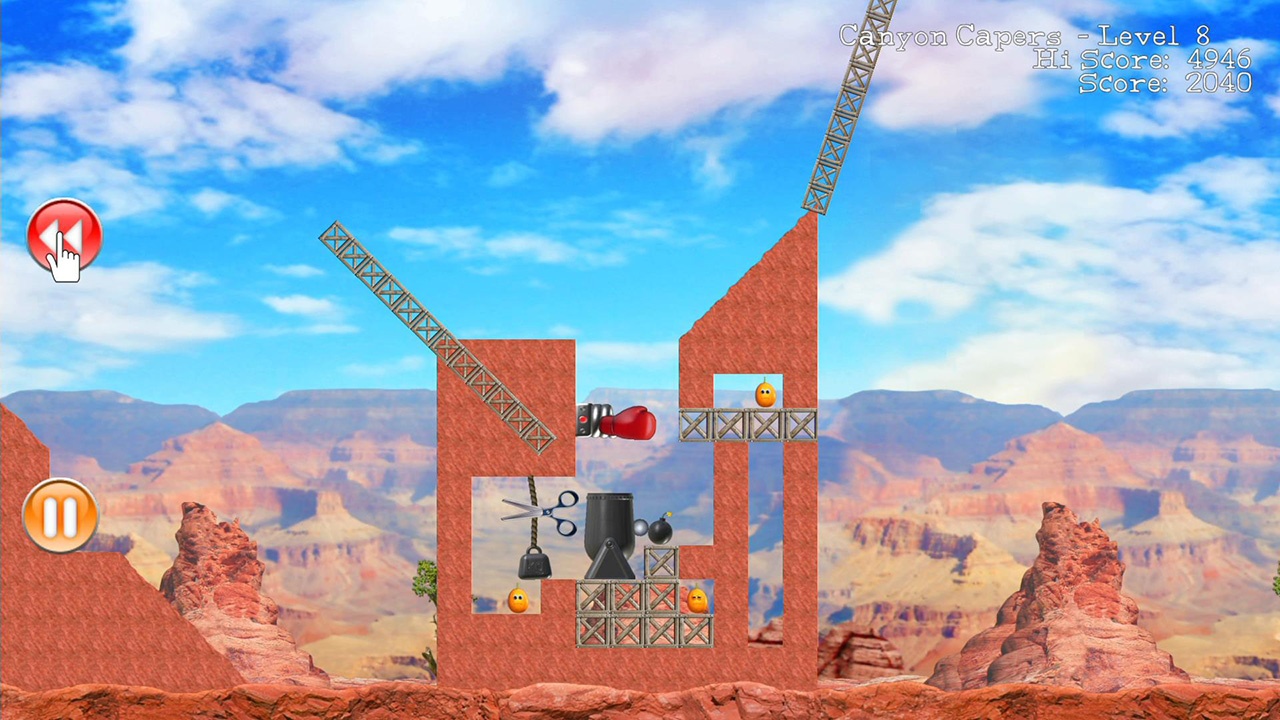 Ah, puzzle games. There’s this wonderful, never ending parade of them on the Switch, and it’s easy to see why. The Switch is portable, has a touchscreen, is owned by players of all age ranges, and developers have seen returns on games that rival the early days of iOS. You have a pretty broad range of titles, from incredibly complex and time-consuming endeavors to the simple, the relaxing, the time killers. But one thing that I haven’t quite run into yet is “annoying.” For all the puzzle games that I’ve tried, there hasn’t been one yet that got on my nerves. Until now.

Splat the Fruit comes to us from West Coast Software, who recently made sure the D/Generation HD port came onto the Switch. Having heard nothing of Splat the Fruit, I headed to the Nintendo page, and was immediately told this was “The Thinking Person’s Angry Birds.” A pretty polarizing statement that immediately alienates people who enjoy Angry Birds, puts the game on some kind of intellectual pedestal, and also tells me that I can expect clone elements out the gate. Sure enough, Splat the Fruit is a physics puzzle type game, where you’re expected to use a large, heavy ball to destroy a number of fruits on the screen. But, far from flinging the ball wildly in an EXACT clone of the Rovio cash cow, this one asks you to set up a number of assistance items, from trampolines and scissors to girders and bombs, which will use a chain reaction to “splat” the fruit. 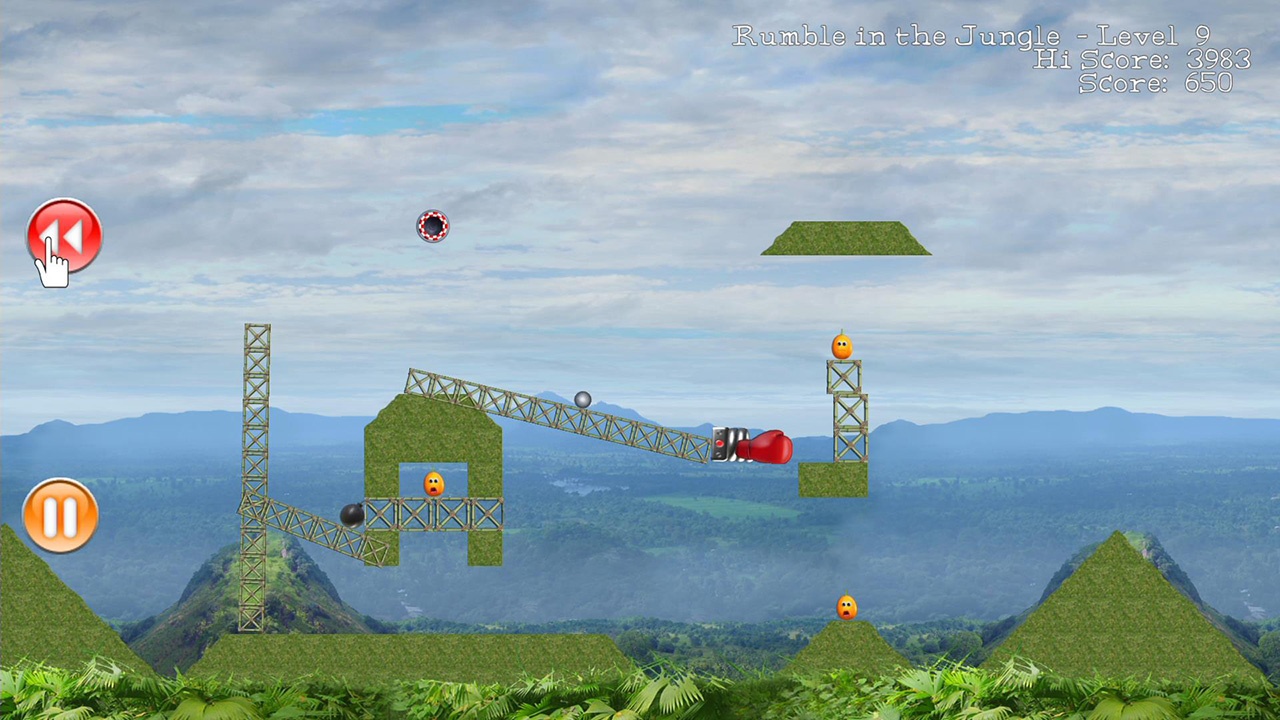 So, right away, the comparison between the games is a total mistake, because anyone worth their puzzle salt will realize this is borrowing heavily from the classic Incredible Machine series. Indeed, far from using angles and luck to accomplish your goal, players need only to figure out the correct placement for each of the limited items given at the start of the round. There isn’t a lot of wiggle room or variation to think about: placing an item in the wrong spot leads to failure. Sure, there’s a chance that the ball could roll an extra couple centimeters, or that the blast radius is larger than you think, but there isn’t any freeform to dictate how to succeed. It’s “set up the plan roughly according to our developers, and execute.” This is a problem with people who haven’t played Angry Birds: there was actually a lot of creativity into how you could win because of how different things reacted to the different birds. Just because you have a mascot and a strangely built stage doesn’t make you a mobile king clone.

Once you get into the groove of Splat the Fruit, nothing really feels particularly difficult. There’s a star rating system, but you only get one chance to start the ball rolling. If you can manage to accomplish your goal and destroy everything, then bam, there’s your perfect score. I wasn’t really engaged with how the game built up each stage, not even when we changed to different areas and were able to use new tools (cannons are inherently fun, but not enough to carry the game). It was about this time that I realized I had been playing with the television muted, so I went ahead and turned on the volume.

You may vaguely remember the decade-old Internet sensation of Annoying Orange. This was at the peak of people and animation being “so random” and shit generally grating on my goddamn brain. Turns out that’s still on YouTube, so color me surprised, but whatever. The voice of the orange was, naturally, annoying, and in this weird, higher register that set my teeth on edge. I always associate that orange with this chipmunk-esque cackling noise that would be used for laughter in so many Flash videos, and it really smacked of low-effort sound effects that got parroted over and over. So when I heard, over the chirpy, simple music, that same kind of laughter, complete with the 1990’s “splat” sound from Nickelodeon cartoons, I immediately knew it was a massive mistake. The sound got muted again, but the damage was done. I hated these fruits. They already looked grotesque, but now I knew they sounded that way too. The plan, I imagine, was to make the fruits super annoying so that players would be satisfied with squishing them. Instead, I wanted to immediately delete the game and go play anything else. Sadly, I’m a consummate professional, so I buffaloed on, one eye twitching. 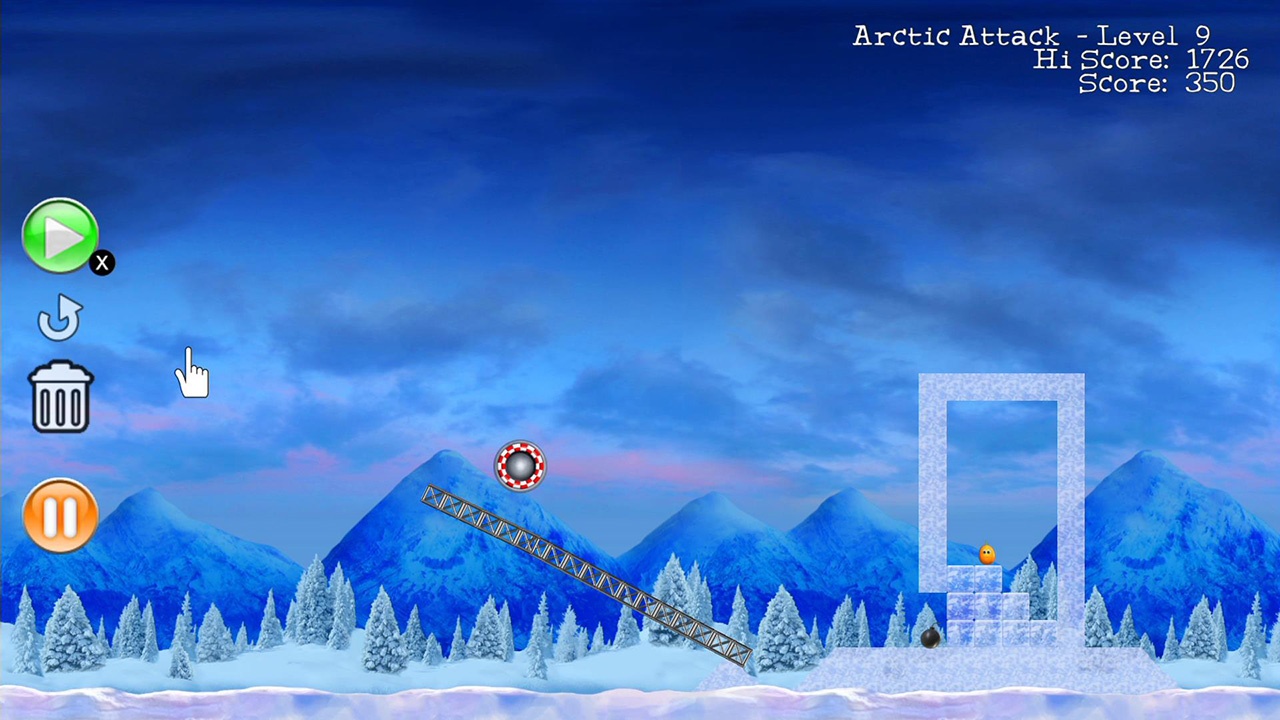 Thankfully, I didn’t have to play much longer. Splat the Fruit, to its credit, offers quite a few different levels, but there are still fewer than 100 in total, and you kind of get into a good mindset with it all. I must confess, this was something where I would look at the stage, think for a moment about how my tools would be utilized, and put them into motion. The end result was, generally, I was able to get to the finish with about two different runs, the first to work out the kinks and the second to accomplish the goal. You can definitely get into a nice rhythm, and the puzzles themselves are pretty nicely laid out. Having said that, make sure you play it in portable mode. The floating cursor that you have to work with is janky at best, and usually requires a bit of patience to get used to selecting a tool, dragging it, placing it and then finessing it.

But there’s just so much going on here that’s graphically displeasing with Splat the Fruit that it leaves a sour taste in my mouth. Surely, with all the time and effort that’s gone into this Switch exclusive, there would have been a bit more time invested. Instead, you’re left with really mediocre, borderline last-century sprites, wonky animations, and just the most godawful sounds that you can imagine without it being intentionally bad. I recommend buying this game for three reasons, and only those three. One, you’re really hard up for an incredibly limited and simplified version of Incredible Machine. Two, you know and love the West Coast Software folk and you want to support them regardless of the product. Three, you’ve played literally every other puzzle game on the Switch (except the PHYSICAL CONTACT series) and you need something for a long flight. If you can safely say none of those apply, please save your cash for another day.