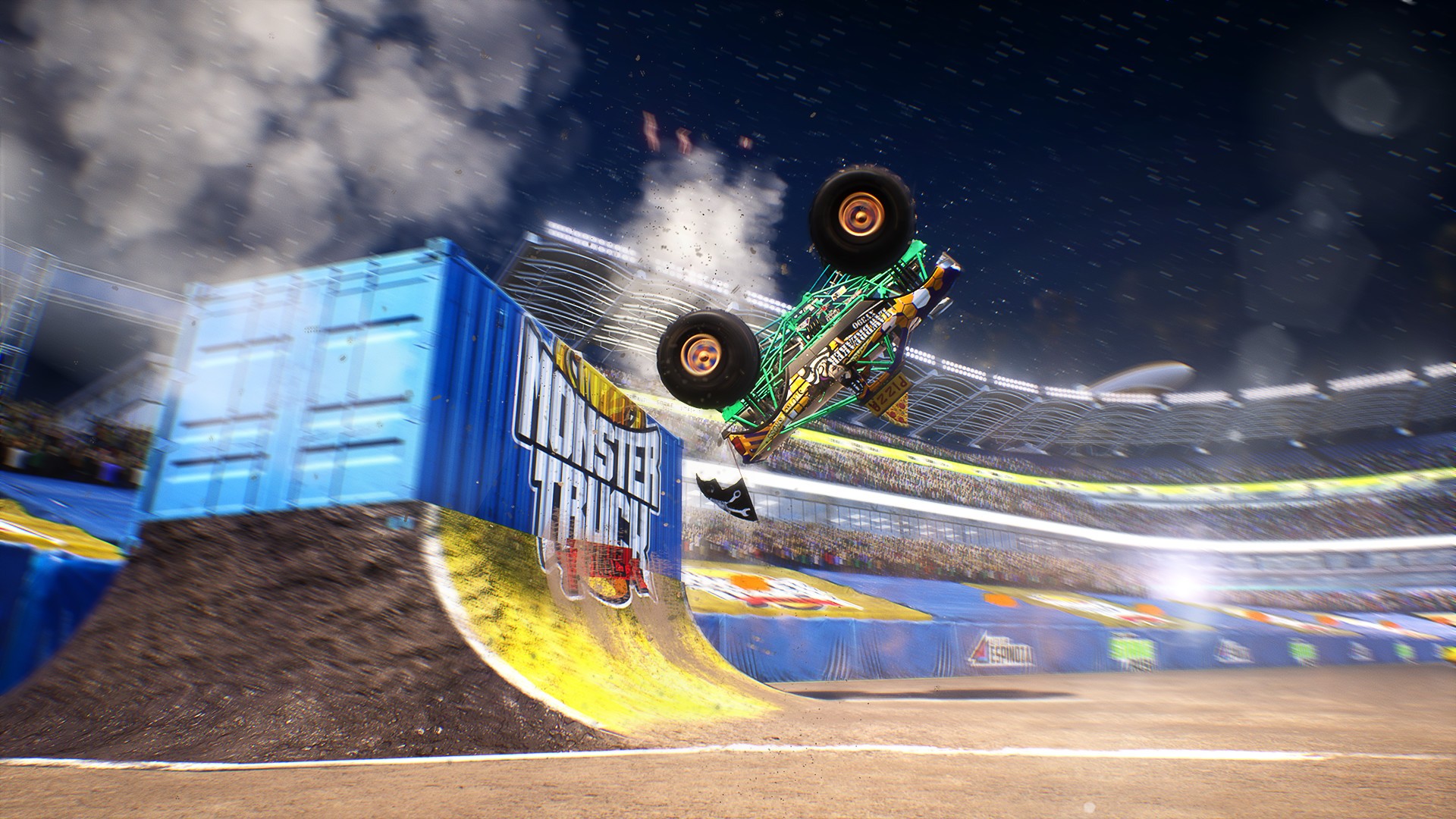 Man, when was the last monster truck game? The last I played was the criminally underplayed, Excite Truck on Nintendo Switch, and honestly, I’m not sure if the trucks in that game were even of the ‘monster’ persuasion. I think they might have just been, y’ know, normal trucks – albeit excitable ones. So when was the last one? Off the top of my head, I really have no idea, and considering we are talking about video games here, that’s pretty crazy. How aren’t there more games based on monster trucks? They’re almost perfect for video games – they’re big, kind dumb and realistically out of bounds for the vast majority of human beings. I mean, do you know anyone who has ever driven a monster truck? I certainly don’t.

Well, overdue or not, monster trucks are finally making an appearance on this generation of consoles in the form of Teyon’s, Monster Truck Championship, a game that is often kinda goofy, but not quite as consistently goofy as I would have hoped. Don’t get me wrong, this is a somewhat surprisingly enjoyable racer, it’s just that, well, I guess I was hoping for something more in line with Excite Truck – a game that truly leans into the absurdity of these vehicles by turning everything up to 11. Instead, we get a well-made racer with just enough in the way of pleasing stupidity for it to stand out from the increasingly po-faced racing crowd while remaining somewhat ‘simmy’ in its own right.

If you haven’t heard of the developer, Teyon, well, that’s not particularly surprising. Their track record is far from exemplary, and up to this point, has had absolutely nothing to do with racing games (let alone monster trucks). With the kind of fun but still pretty bad, Rambo: The Video Game and the…..kind of fun but still pretty bad, Terminator Resistance to their name, there was nothing in their back catalogue to suggest that their next game would be something of this ilk, but to their credit, while it’s unlikely to pull up any trees, Monster Truck Championship is undoubtedly their best game to date (perhaps damning with faint praise there), but also a genuinely fun racer. I just wish it was a little dumber.

That might sound odd when referring to a game that allows you to essentially dress your monster truck up as a toaster, but beyond its admittedly mental collection of unlockable skins, Monster Truck Championship arguably lacks that little spark of magic that could have made it something genuinely unique. Saying that though, what is here is largely fun thanks to its solid handling mechanics, decent sense of weight and enjoyable collection of game modes. 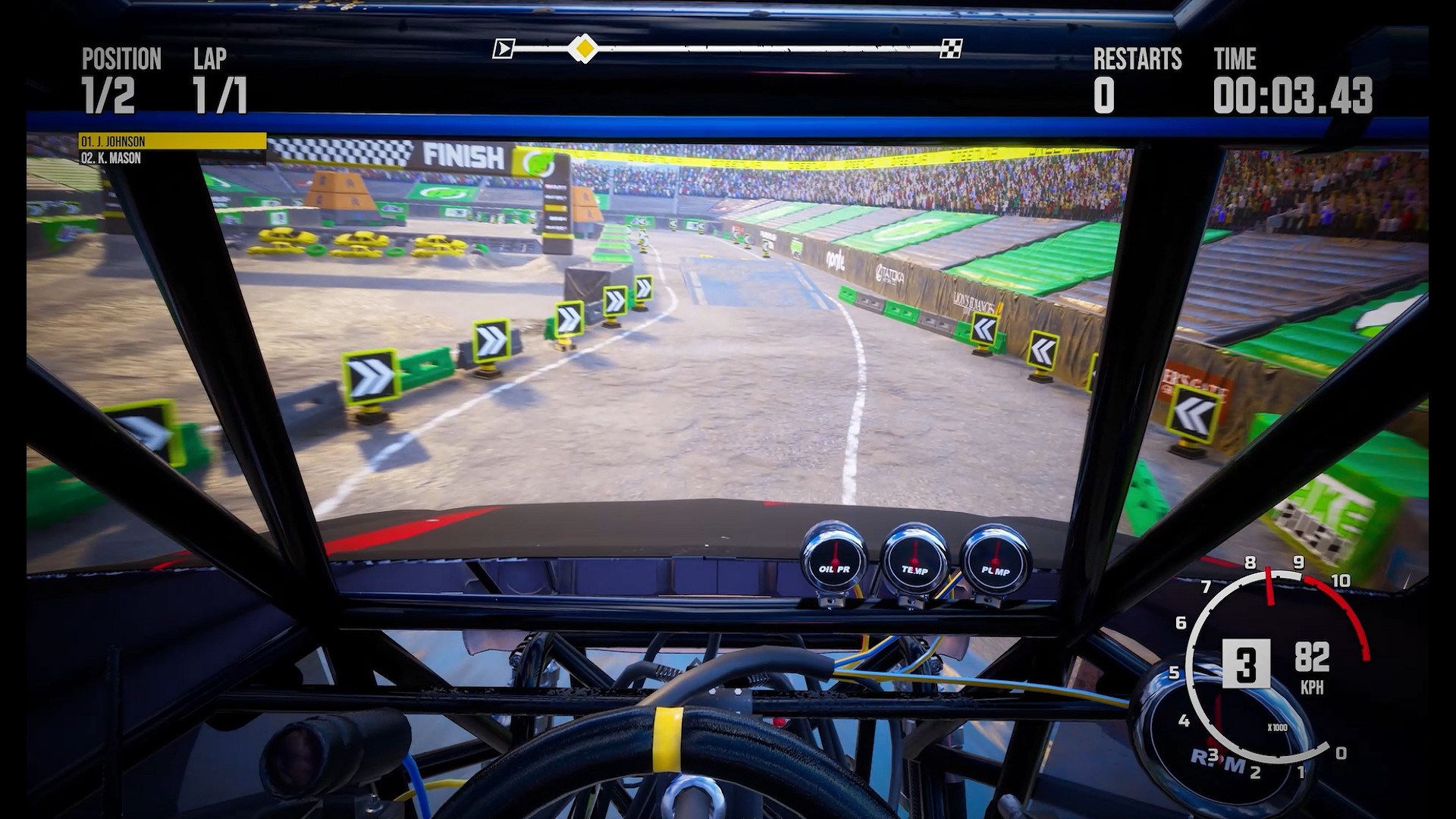 The career mode, spanning three separate championships unsurprisingly incorporates each of the games’ unique modes, and despite its relative brevity, undoubtedly benefits from the variety provided by its host of disparate disciplines. Most events here are short, sharp and fun with you and your monster truck shifted hastily from one event to the other before you have the chance to notice that the majority of additional options available are actually pretty shallow.

Sure, you can add sponsors and hire staff to assist in the upgrade of your vehicle and the unlocking of new skins, but most of this stuff is surface level content with very little making much of a difference to your inevitable progression to the top. What really makes the game tick is the swift move from one game mode to another. Whether it be a standard race, drag race, destruction event or freestyle, while far from being particularly groundbreaking, they are all fun enough in their own way, and provide enough variety to make Monster Truck Championship’s career mode a suitably enjoyable endeavour.

A big part of the fun comes from the fact that these monster trucks handle like, well, monster trucks. They are big, heavy, with unique handling and just enough in the way of arcade-inspired stupidity to make the most of the games’, by definition, absurd premise. Standard races are certainly enjoyable enough, and drag races provide something that feels genuinely unique, but given the nature of the vehicles, it’s usually the destruction and freestyle events that deliver the games’ genuine stand out moments.

Whether it be destroying smaller vehicles or wilfully flipping your monster truck to pull off absurd tricks, it’s here that the game comes closest to what it perhaps should have been. With a smartly implemented multiplier system, you are encouraged to throw your increasingly ridiculous-looking monster truck into jumps and flips to keep your high score ticking along, and while certain tricks can feel like they are more a matter of luck than judgement, there is certainly something to be said for performing backflips and running over wrecked cars in a vehicle the size of a small house. 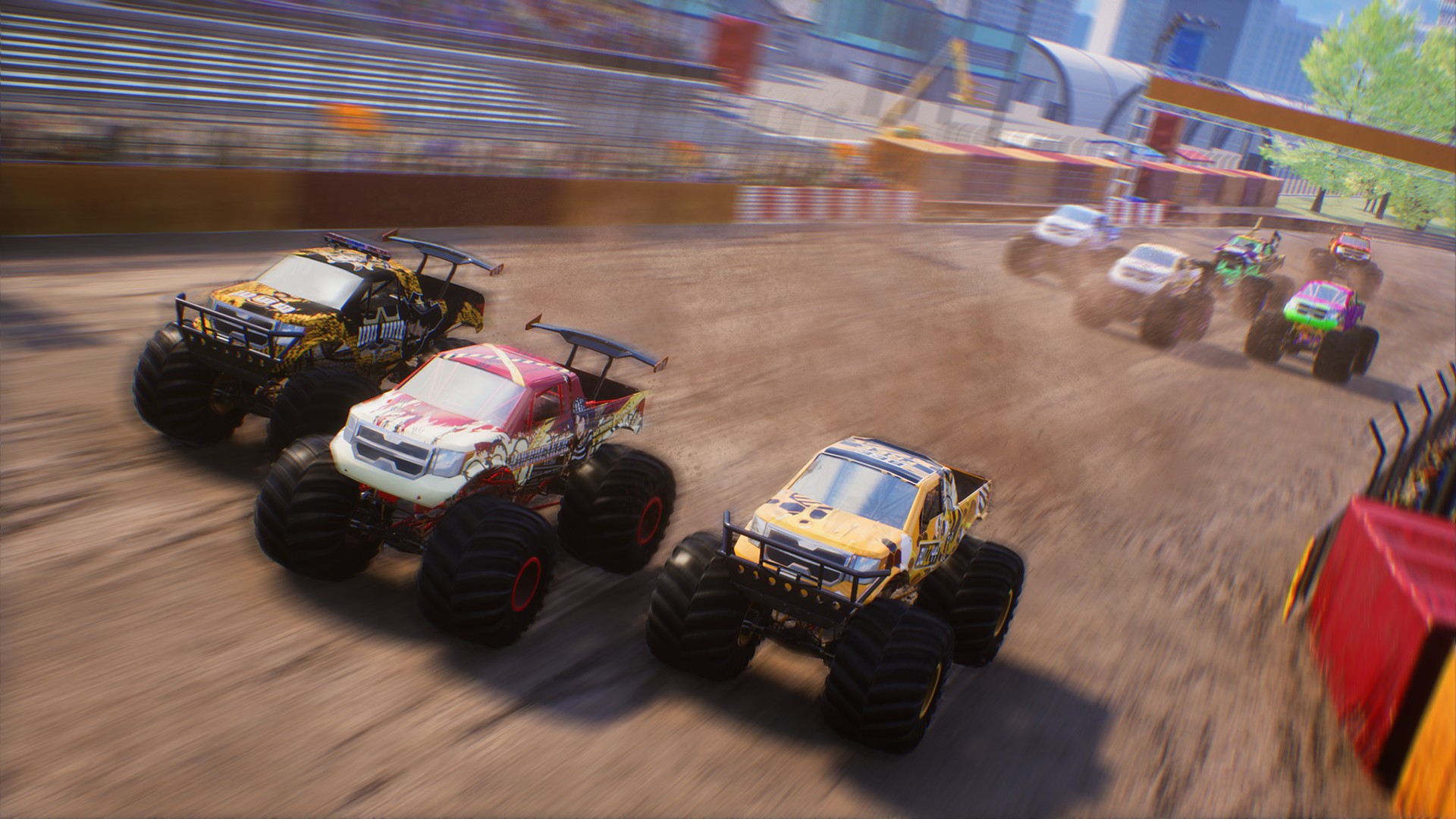 Oddly, as crazy as these events are, the races and drag events are actually much closer to a sim-like experience with victory requiring more in the way of skill and patience. You can try to barge your way through the competition of course, but on the higher difficulty settings, in particular, you’ll need to take a much more nuanced approach to racing if you plan on getting near the podium. These events are still fun of course (and will likely be the preferred events for those with a genuine interest in the sport), but the racing here often feels a long way removed from the more arcade-like freestyle and destruction-based events.

Like the races, your surroundings, while undoubtedly pretty enough, again lean more towards the sim end of the spectrum with arenas represented more realistically than gamers such as myself would have hoped for. Fans of the sport will undoubtedly appreciate this relatively serious take on what is for all intents and purposes a largely ludicrous sport, but I for one would have liked Teyon to perhaps push the boat out a bit with a little more in the way of truly spectacular arenas and race tracks. This feels like the kind of game in which Teylon could have had their cake and ate it in that regard, and while they do dip a toe into the world of more ‘video gamey’ design in terms of the vehicle skins and freestyle events, this is still a game that wants to keep itself just the right side of realistic.

With limited online options and only a handful of other, somewhat basic game modes to choose from, Monster Truck Championship largely survives on the strength of its career mode, and while some of the more sim-esque additions don’t really add up to much, its collection of unique event types and its constant move between the more sim-like racing events and its more arcade-inspired destruction and stunt events ensure that it remains enjoyable throughout. It’s a shame that Teylon didn’t embrace the underlying absurdity of monster truck racing beyond its collection of imaginative vehicle skins, but by leaning towards the simulation end of the spectrum (at least when it comes to racing), they have managed to create a racer that can be both serious and stupid, true to life but still knowingly absurd.

It’s a shame that Teylon didn’t embrace the underlying absurdity of monster truck racing beyond its collection of imaginative vehicle skins, but by leaning towards the simulation end of the spectrum, they have managed to create a racer that can be both serious and stupid, true to life but still knowingly absurd.