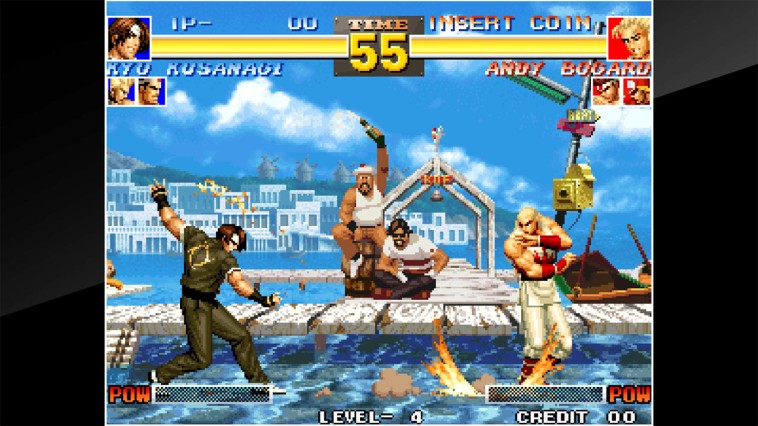 I think I was getting excited after I reviewed King of Fighters 2000 some time back, because the series was starting to get into a really flushed out and vivid form. Colors were popping, animations were tight, and the developers were experimenting with new and different ideas for what the teams could be. I was really hoping 2001 was coming down the pipeline soon, as it was the conclusion to the NESTS plotline that held cohesion for both 99 and 2000, and would have been a satisfying end to my King of Fighters trilogy review. Wouldn’t that have been dope? But ACA and SNK have some kind of other plan, because here I sit, with King of Fighters 95.

Now, first and foremost, I actually really liked King of Fighters 95. Not only is it a good throwback to the origins of the series, but the layout is really spiffy, and I like how there’s this option of “freeform” vs “storyline.” Sure, you can use a pre-set team in order to enter the tournament and follow the plot of whomever you choose, but why should you have to? This is where we lay the groundwork for what the later games will feel more like, where players make their dream teams and wail away on others. As a result, I also argue that King of Fighters 95 is one of the big ones for encouraging more two player modes. I know, it’s a fighting game, it naturally caters to player vs. player, but this is where fans start to mix it up and create the ultimate balances of action and defense, of overpower and swagger versus subtle and swift. 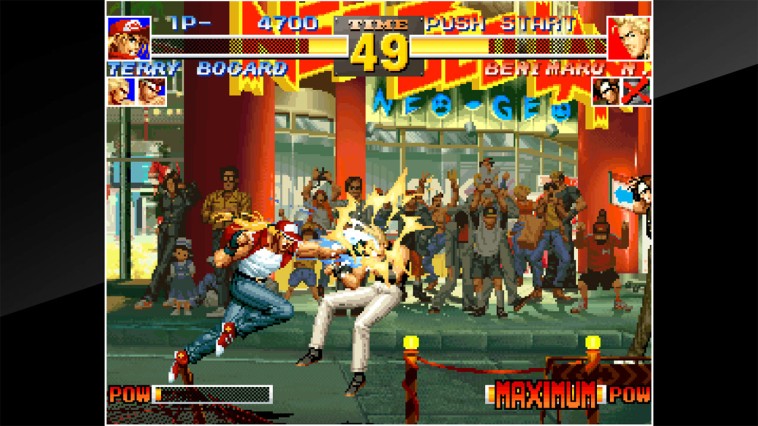 But the problems start to show themselves immediately. This game came out in 1995, right? In my mind, that means that games were still primitive and ugly, and so KoF95 is like a diamond in the rough, this beautifully polished piece that shows that 2D is superior to the up and coming 3D competitors like the horrible, polygon mess of Battle Arena Toshinden. Then again, this is the same year that Street Fighter Alpha and Mortal Kombat III came out, which are more memorable and, in some ways, more visually pleasing than what SNK brought to the table. The icons for select are meant to be shadowy to create some tension and mystery, but they just appear dirty and dusty. A lot of the stages feel that way too: sure, the industrial lot where you fight is meant to be as such, but you’d think the brightly lit beaches would seem like they were grimy.

Button response is about what you’d expect from something that’s from 1995. King of Fighters has made a name for itself for being one of the more brutal fighters in terms of combinations and execution, and I’d say the newest versions are some of the most crisp titles you’d imagine, almost demanding that players use a fight stick if they want to be taken seriously. Back in 1995, the computer feels like it constantly has an advantage in single player mode, being significantly more fluid than the player in terms of setting up and executing ranged moves and blocks. The only way to truly enjoy the main mechanics are to play versus with a friend or loved one until you’re both more familiar with the quirks of how the game handles itself, then moving into single player mode. It’s like rewiring your brain to accept standard definition after watching 4K for the last few months: you don’t want to, and it feels weird, but, after changing over, you see it’s not so bad. 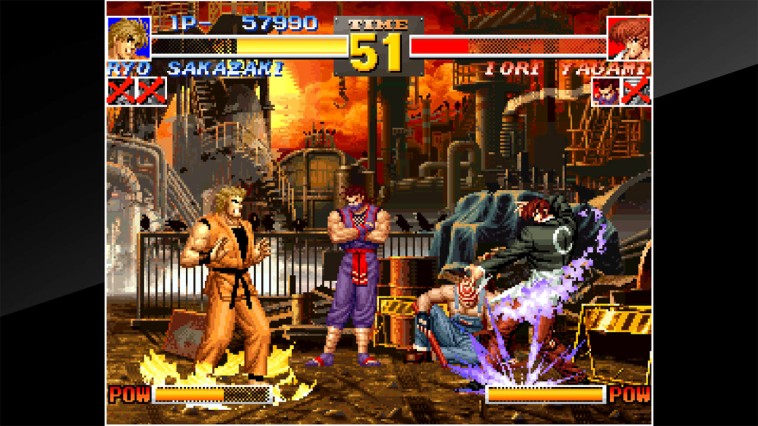 The only part about the game that feels unforgivable is the sound. Even by 1995 standards, the audio of King of Fighters 95 is pretty awful. The music sounds like it was created to be on the NES and then, at the last minute, was ported as-is to the NEO GEO. It’s tinny and flat, with a lot of uninspired notes and tunes that sound more synthetic than anything. The voices, which no one imagined would be perfect, sound extra distorted, and I say that having heard some from games older than this on the NEO GEO. Take, for example, Samurai Showdown, which is two years older. The announcer is clean and strong, the music is dynamic and engaging, and it’s always preferable to listen to the game rather than pipe in an outside soundtrack. By comparison, KoF95 is best played on mute, with some cool tunes from other games to mute the nonsense happening on screen.

Here’s my full take on what happened. I think SNK got cocky after creating King of Fighters 94 and realized that they had a full on new brand on hand, one that could be awesome. They acknowledged the complaints from the critics about team organization and let you edit those, and added in a couple of new characters and called it a day. But it feels rushed, which is saying something for a game that is over twenty years old (goddammit I’m old). They wanted to prove they could get a game out every year and it’s a mistake that would haunt them for nearly a decade while they chased the dragon. Some years were mostly successful, some were not, and this is definitely an off year. There’s some merit to the game, for sure, especially if you’re a fan of the series, and the NEO GEO titles on the Switch are quite reasonable in price in terms of maintaining your Switch library and adding in new things. But I’m hard pressed to recommend it to people looking to dabble into fighting games, and it’s not even a great sell for retro collectors in general, because it’ll quickly just become an icon on your home screen. It’s best to admire and appreciate that Hamster is getting more old titles onto the Switch, but put your money where your appeal goes, not to what you wish it could be.