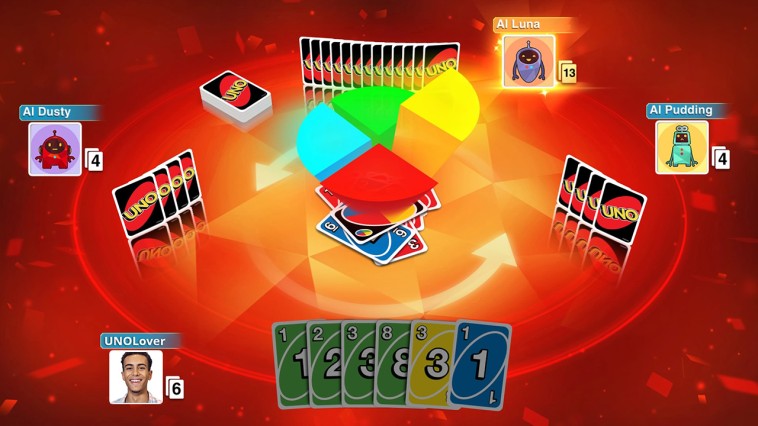 It’s never quite clear what people are looking for when it comes to the digital port of physical games. For some, like Chess Ultra, it’s pretty apparent that the developers wanted to stay both simple and pure, so it became a solid piece. On the other hand, PHYSICAL CONTACT: Speed was pretty straightforward, but poor implementation of controls and general atmosphere made it highly undesirable. And Monopoly was certainly a mixed bag, but most of the problems hinged on crashing and being unable to launch. So when I saw Uno was coming down the pipeline from Ubisoft, I wasn’t quite sure what I would find inside. What I got was actually a pretty alright experience.

Uno is true to life with how the game is treated on the Switch. The standard game of color and number matching exists, and some added effects are thrown in when the effect cards (draw, skip, reverse, etc) are played. You don’t have a choice but to have four players, so either it’s couch co-op against two AI, you versus three computer players, or waiting a minute to create an online game or join one. The online wasn’t bad, I managed to join a couple of matches straight away, and then ended up waiting quite awhile on my third attempt. Timing is everything, so peak hours (3-8pm EST) are probably gonna be the most successful. There’s also an option for versus if you have multiple Switches, but I don’t know anyone in my proximity who has another Switch, much less is also a game reviewer. I’ll assume it was “ok.” 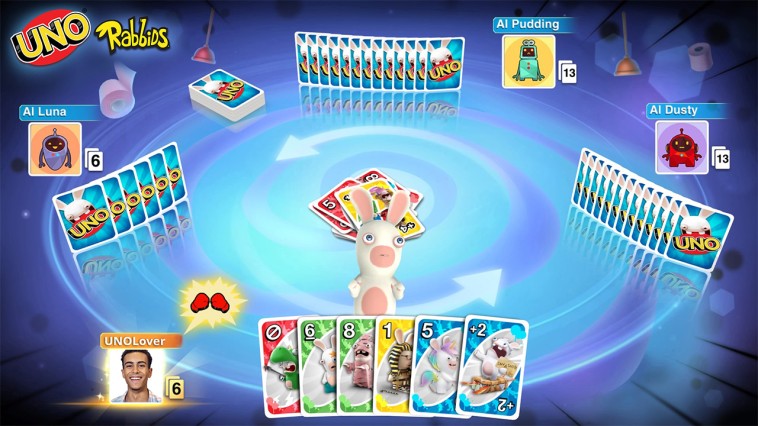 Ubisoft is still having a little bit of an issue with getting these branded board/card games working on the Switch, but at least, for Uno, it takes place before and after matches, not during. I was more than a little nervous when I saw the Ubisoft logo actually get choppy and lag, and there is always some stuttering when you first hit the main menu, but I didn’t see anything noticeable during actual gameplay. Even still, when you’re paying top dollar for a huge development studio to put an international game onto a console, you’d expect everything to run like butter: there’s not exactly dynamic, open worlds that need to be rendered.

I haven’t played digital Uno before, so I wasn’t really going in with high expectations. So I was pretty amazed by the number of rule choices you have right from the very beginning. I’m used to playing a lot of games with house rules on account of my family being dirty cheaters, and Uno manages to incorporate most of those for toggling on and off. Stackable cards, jump in, calling bluffs with Wild+4 cards, and the weird 7 shuffle rule that was at one friend’s house. I honestly don’t know if these are standard and recommended in the packaging or if Ubisoft did field work to find out what was most common, but I commend the inclusion and the option for all of them. Missing is the rule when you play three zeros in a row, everyone needs to scream in fake ecstasy, but college was a different time and I realize that rule doesn’t make a lot of sense anymore.

Uno is bright and colorful on the Switch, which matches the game’s core motif, but it also lends itself quite well to what Ubisoft brings with their version: deck variants. This actually made me incredibly happy, because Monopoly felt like it hinted at something that could be done in this vein, but never really went the full nine yards. Uno unabashedly celebrates the fact that Ubisoft is publishing it by having three Ubisoft property decks, plus a “winter theme” to fit in with the season. There’s nothing more to the winter theme other than an icy rink and Artic-themed AI, but it’s still nice and showcases the possibility of other themes coming in the future (or possibly even just unlocking as the year changes). 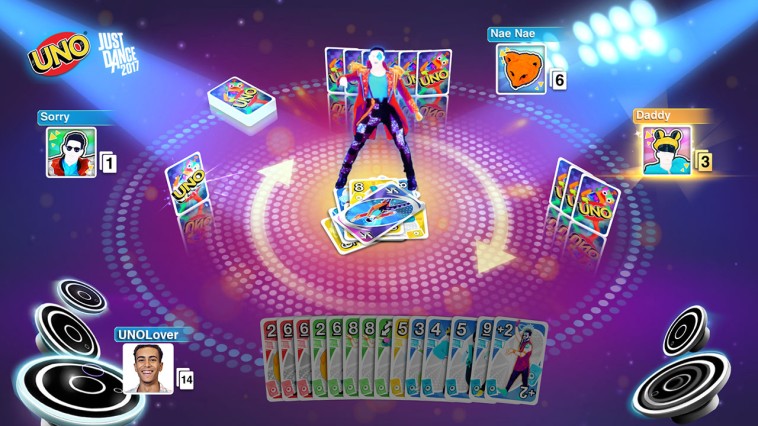 As for the IP tie in, these are a mixed bag that depend entirely on your own love affair with the more casual and family friendly titles that Ubisoft holds onto. Just Dance, Rayman and Rabbids all join in, each with their own themed cards, special action cards and game-centric avatars for the computer players. Just Dance is an odd one, with the extra music and rhythm themed cards being interesting but nothing too spectacular. Truth be told, Just Dance is my least favorite, simply because it doesn’t feel like a good fit. I’m sure fans of the franchise feel differently, just as I actually quite the Rabbids, a series that is openly reviled by many. None of the decks are mandatory; you won’t unlock anything special by using them, so you can just enjoy classic Uno and keep right on hating whomever you’d like. Still, the advent of this tie-in makes me excited for the future, and, with a little careful sculpting, maybe we’ll see the more from Prince of Persia, Tom Clancy or, God forbid, the Far Cry series. C’mon, you wouldn’t be curious? Or an Assassin’s Creed Uno deck? It couldn’t be worse than the iOS game that came out last year.

A card game really is only as fun as those who play it, and I’ve always had a good spot in my heart for Uno. It’s a decent title on the Switch with some good variety, plenty of replay and minimal glitches. The inclusion of colorblind mode for players who can’t do red/green is really nice, and the asking price is damn reasonable (as you’d probably pay about the same to grab a deck at Toys ‘R Us). If you’ve been interested in having a great card game on your Switch and can get over some minimal menu slowdown, then Uno is a smart bet.