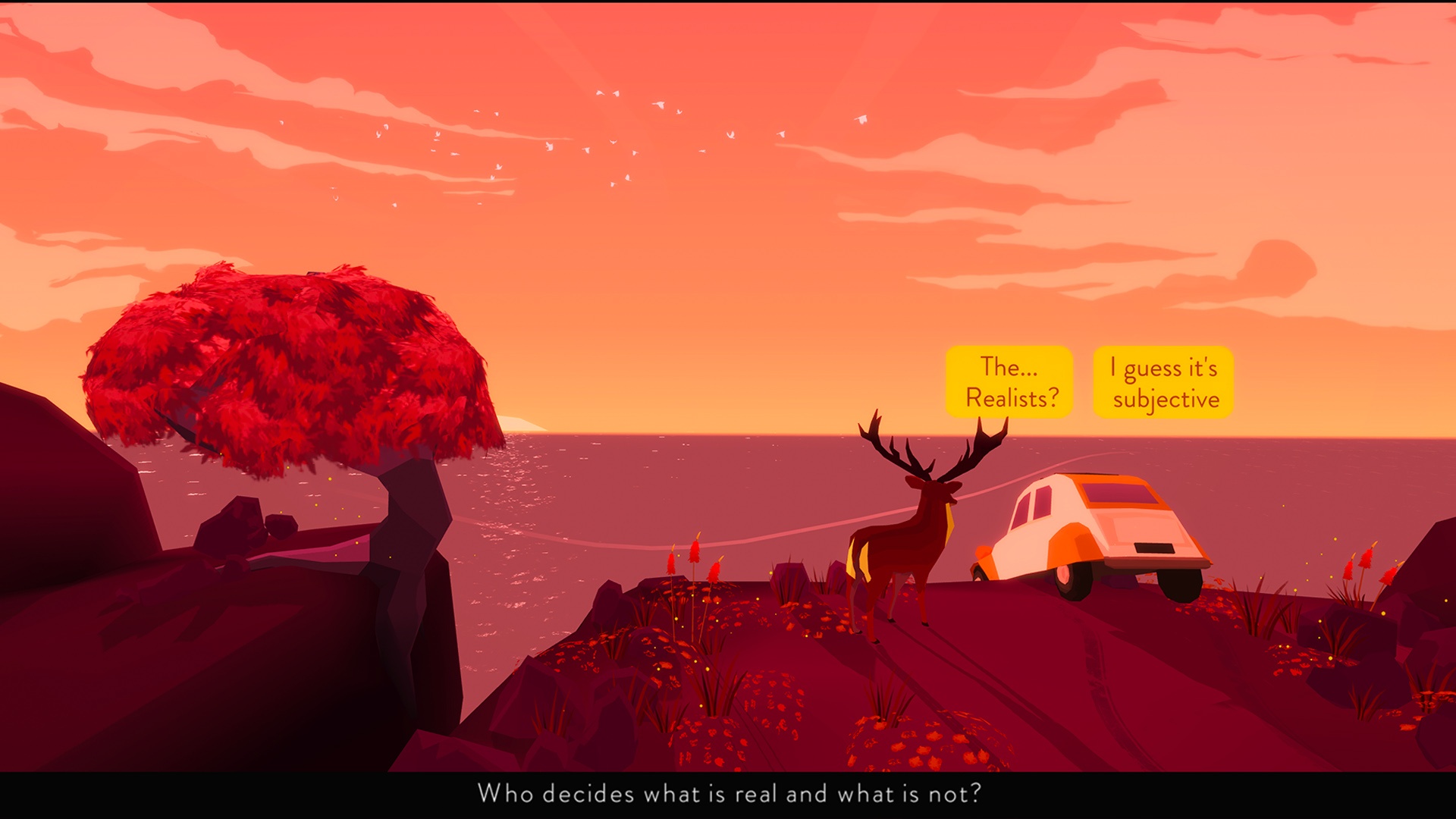 Far From Noise is a single-player narrative told in a style that’s similar to a Visual Novel, except that the imagery is mostly limited to a few shots of a car teetering on the edge of a deadly cliff. The bulk of the gameplay is dialog choices, introspection, and the raw experience of the protagonist’s dilemma. Released on November 14th, 2017, from George Batchelor Limited, Far From Noise challenges what modern gameplay can look like, and pushes the envelope on delivering a compelling narrative without all the bells and whistles.

Far From Noise begins with our protagonist’s car already nestled precariously on the edge of a very, very steep cliff overlooking the ocean. The view is spectacular – except for the person trapped inside. Dialog options in the form of word-or-action “bubbles” allow the player to steer the narrative. The reactions of our main character range from calm and optimistic to panicked, cheeky, and dire. The car has overheated, and “Laura” (as I chose to name the car) is in a bad position to slip into reverse even if the engine wasn’t smoking. The story progresses from there, introducing wildlife into the mix. I don’t want to give away too much of the plot points, but at one time the protagonist is speaking with a rather Zen deer. Zen Deer poses some life questions, makes some inspiring statements, and challenges our hero to reconsider his or her options.

Far From Noise quickly delves into very serious themes, posing questions about life, death, reality, and fate. I was surprised that the dialog choices did such a great job of creating two vastly different reactions to most things – sometimes three, occasionally a dialog choice plus an action. Most of the time, it was easy for me to picture myself in this situation and choose what I would be more likely to say, think, or do; I think that’s a huge part of the appeal for a Story Rich title such as this. Far From Noise is designed to allow the player to input his or her own personality into the situation, and to experience it on that level rather than having a complex, detailed hero or heroine in the mix. 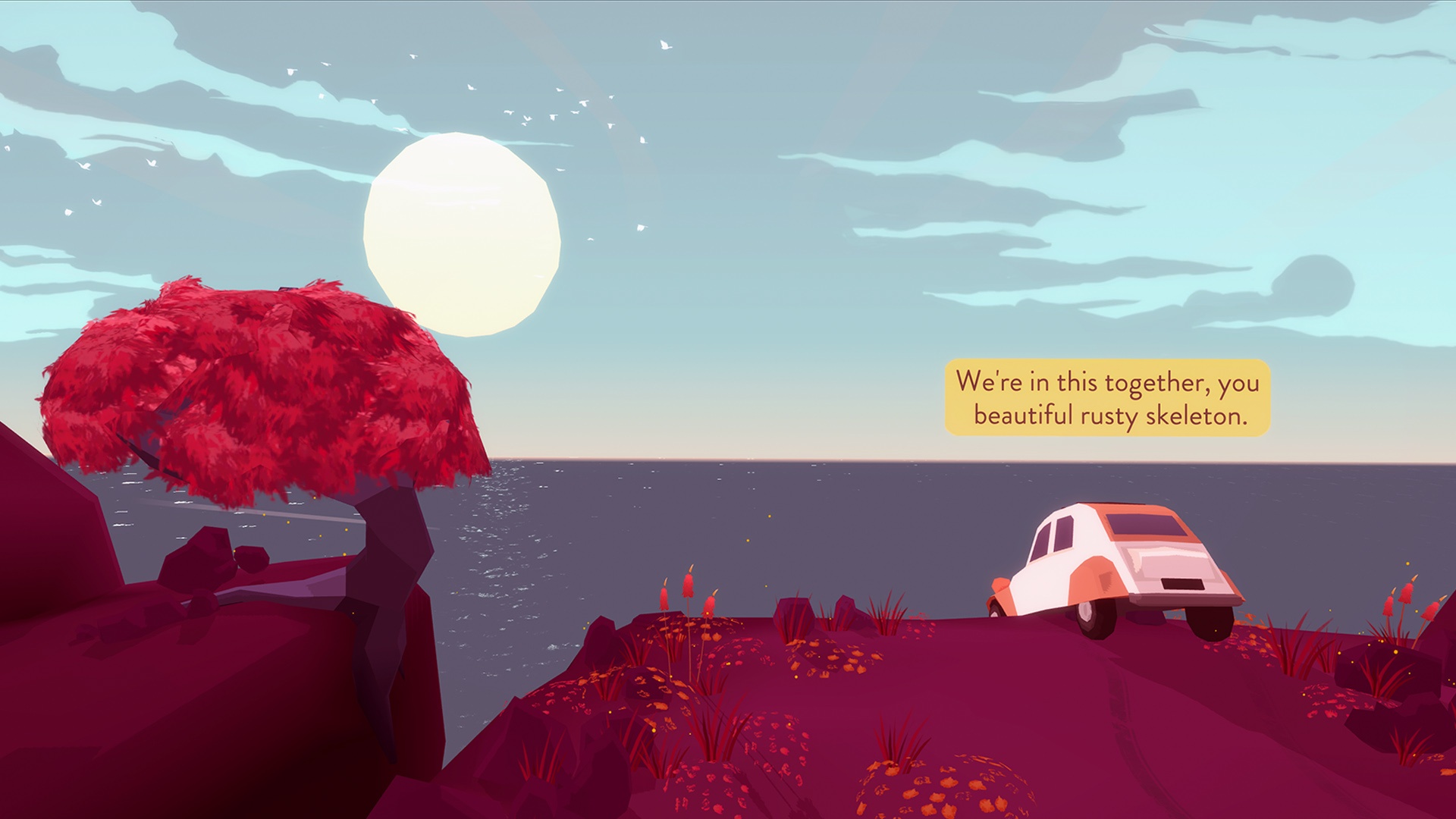 That being said, Far From Noise won’t be for everyone, considering its slow-paced, Story Rich design. There’s little in the way of traditional “Action” here, though the writing was strong enough to make me feel emotionally invested in the outcome. I love this style of storytelling, so I was on the edge of my seat; however, if a leisurely, thought-provoking stroll through big topics like life and death isn’t your idea of a good time, you might find Far From Noise lacking due to limited other content.

The art style is absolutely gorgeous, which is critical considering Far From Noise essentially takes place in a single space – on this ledge. But the color of the landscape at sunset, and even into the night, is stunning. The soundtrack is more nature sounds, like the ocean waves or the crash of thunder, rather than a true score of music pieces. At one point the wind was blowing hard, and my controller started to vibrate; it was a nice trick for enhancing the immersion. As an entire package, Far From Noise is a treat for the senses, and the life springing up around this teetering deathtrap of a car created a welcome polarity betwixt the two.

There’s no interface to speak of, no inventory, no real controls. Players simply choose from the available reaction options, and let the chips fall where they may. The landscape doesn’t change much, but the weather and the time of day do, plus there are a few glimpses of the world from other perspectives. 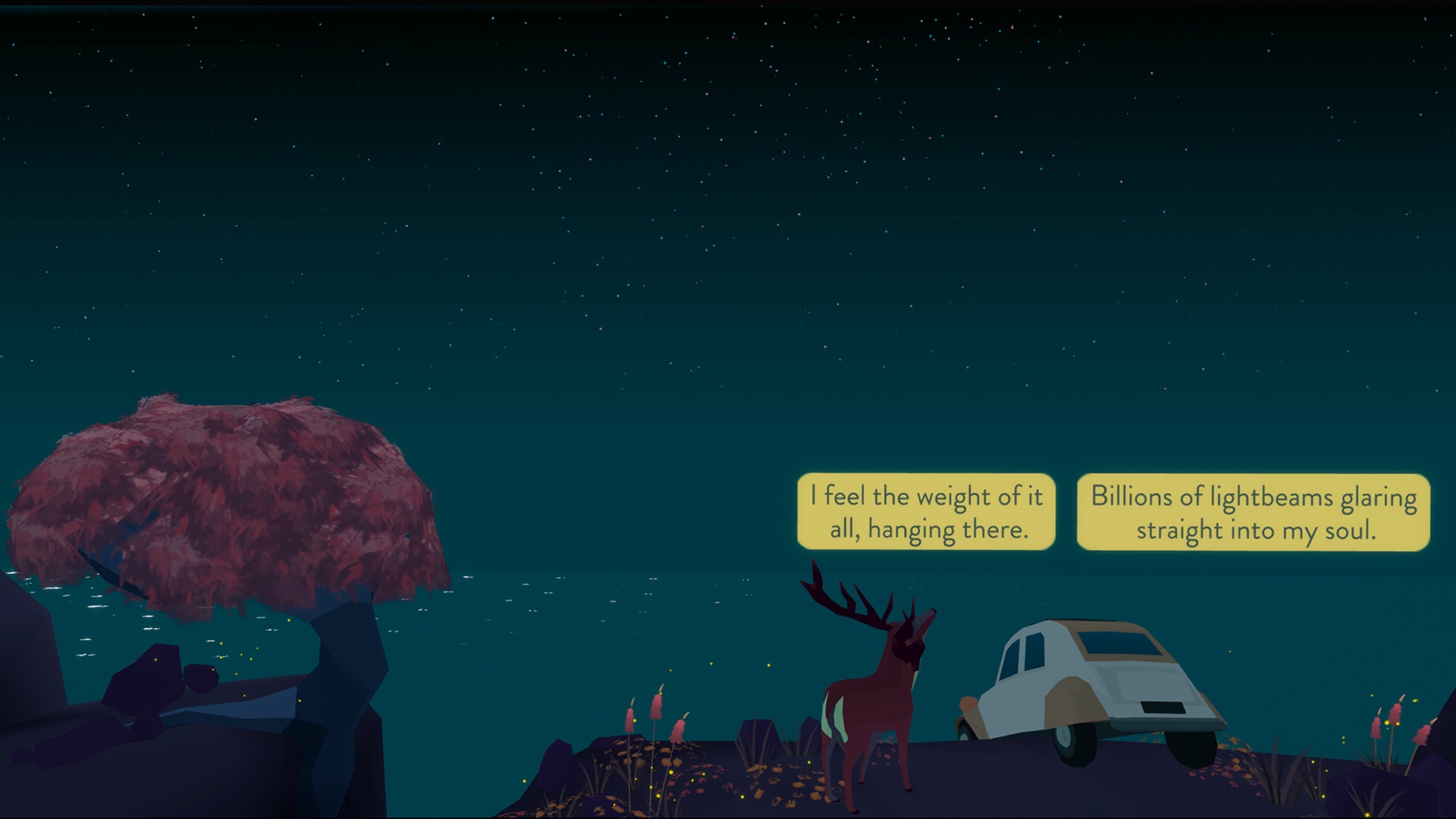 Far From Noise is an ambitious attempt to challenge the way with think of gameplay and the gaming experience, and it excels at what it does. The story writing is superb, and the art style blends beautifully to create a very gripping, compelling experience. However, the playtime is fairly brief – it only takes a couple of hours, if that, to “defeat” Far From Noise and see it to its conclusion. And, given the style of narrative gameplay, there’s little replay value unless you just want to pursue other dialog choices.

This style of gameplay isn’t for everyone, but it is a rich single-player experience for gamers who enjoy this method of storytelling. There’s interesting characters, detailed conversations, and even quality special effects and nature sounds to help set the chill mood. The suspense is generated via compassion for the main character, and interest in the creatures he or she interacts with; the writing has to be top notch for this to succeed, and it does, in spades. If you’re a fan of Story Rich titles, or even Visual Novels, I recommend giving Far From Noise a try. Especially if you have an opportunity to sit, quietly, and fully digest the experience. I found its topics very thought provoking and intriguing, and I hope that you will, too.