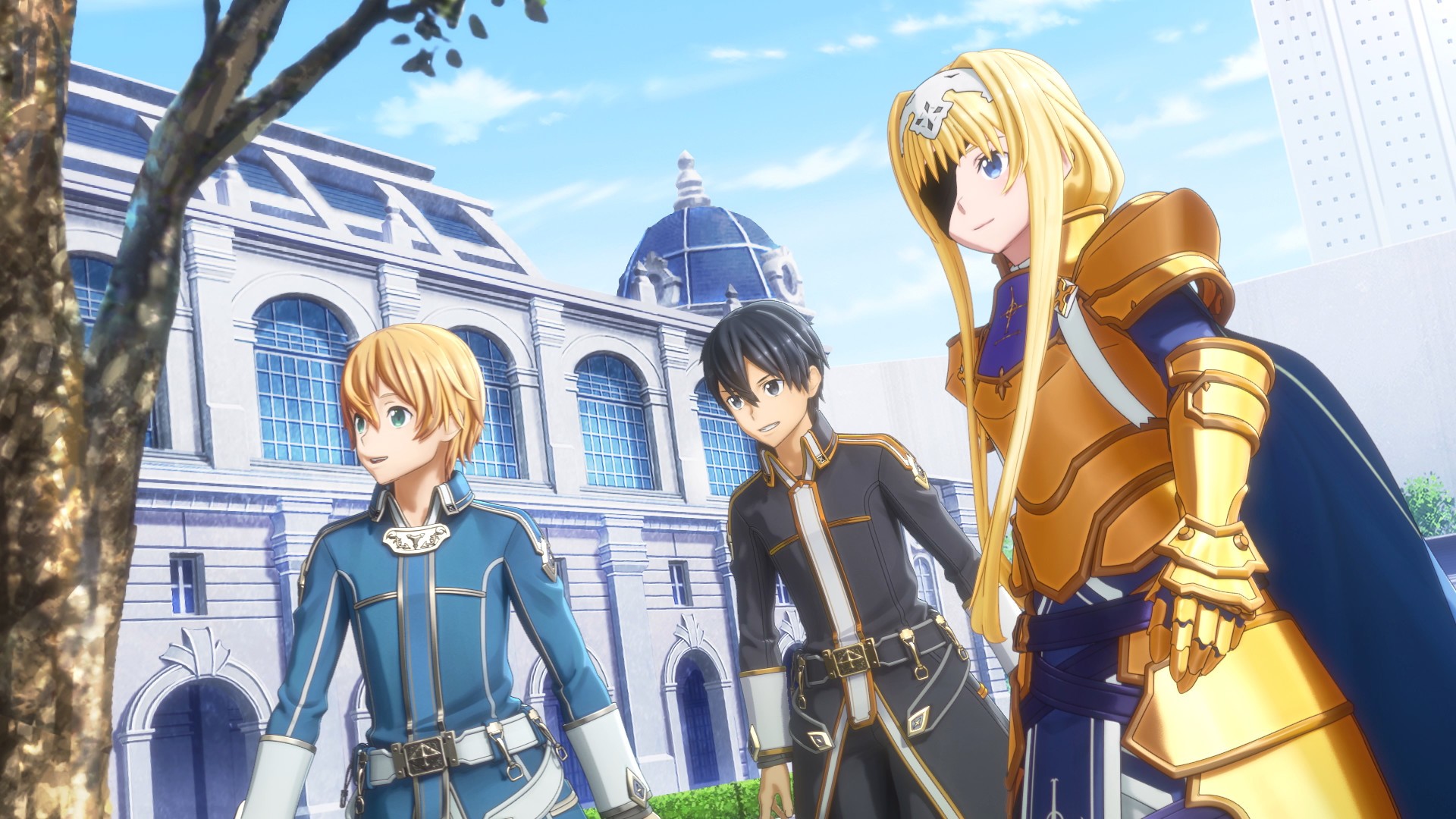 Sword Art Online is a franchise that is held dear by myself and a legion of fans. It also happens to be one of the most successful Anime series in the world. So, when Sword Art Online Alicization Lycoris was first announced I knew it would be a day one purchase for me, this entry being the seventh in the game universe and is developed by Bandai Namco and Aquria. At first glance this game looks leaps ahead of SAO Fatal Bullet, the visuals have improved dramatically, and the general gameplay loop has much more depth, it seems like each time Bandai Namco set their sights on the next chapter in the series they get a little better. Sword Art Online Alicization Lycoris centres on the Underworld arc of the anime series, we pick up with the Black Swordsman Kirito as he wakes up in an unknown world with no way of leaving. Kirito must find out where he is and how he got there, in his search for answers he comes across a young man named Eugeo, the journey they are about to embark on will change their lives forever.

Luckily Kirito has done this before, although you would think after a person gets caught in multiple VR death games they would learn to leave those headsets alone, but nope, and yet again he is plunged into a world on the brink of devastation. What drew me into the world of SAO all those years ago was the story and how the stakes were so high. One mistake and this game would kill you.

In my opinion, what followed after that first death game didn’t really set the stakes in the same way, In Alicization Lycoris Kirito wakes up in the world of Underworld with no memory of how he got here and I think the story works better this way. The overarching theme of this series is Life, what life means and how far someone will go to protect life. I like the premise of this story and at times it works beautifully, unfortunately that is not always the case. This is game is extremely lengthy and filled to the brim with visual novel style scenes, if you just focus on the story and don’t rush too much you are looking at around 60 hours to get to the endgame. The issue here is that there are so many scenes with dialogue that are voice acted in Japanese only, that means a lot of reading. So many of these scenes are just dialogue between characters, they don’t move the plot forward in any meaningful way and it becomes harder and harder to care about that stuff. I love this world and I think it is the best arc in the entire series. But I got bored with listening to Kirito and Asuna talk about their lunch for the fourteenth time.

A good example of bad pacing is in the games opening hours; Chapter one is approximately fifteen hours long. After I hit a game breaking bug I lost all of my progress and had to start again I skipped all the cutscenes and arrived at chapter two within six hours. Granted in my first playthrough I had to learn the combat system and I did a few side quests, but it is no joke when I tell you that there are so many dialogue sequences, particularly in the middle section of chapter one. However, there are some incredibly exciting moments in chapter one so I can’t say that I didn’t completely enjoy it, it’s just a shame that the pacing of the game’s opening is so off because it really has potential. Things look quite a bit better when you do get to chapter two though, and once you get there, the game world opens up for you, there are side quests, monster hunts and exploration. That is not to say the game is cured of its overindulgence in dialogue, it’s just more spaced out, but again it’s unfortunate that the actual meat of the game is hidden behind, what is essentially, a visual novel. It is very weird to me that this game has character creation and multiplayer and yet you are locked out it for the first fifteen hours of the game. 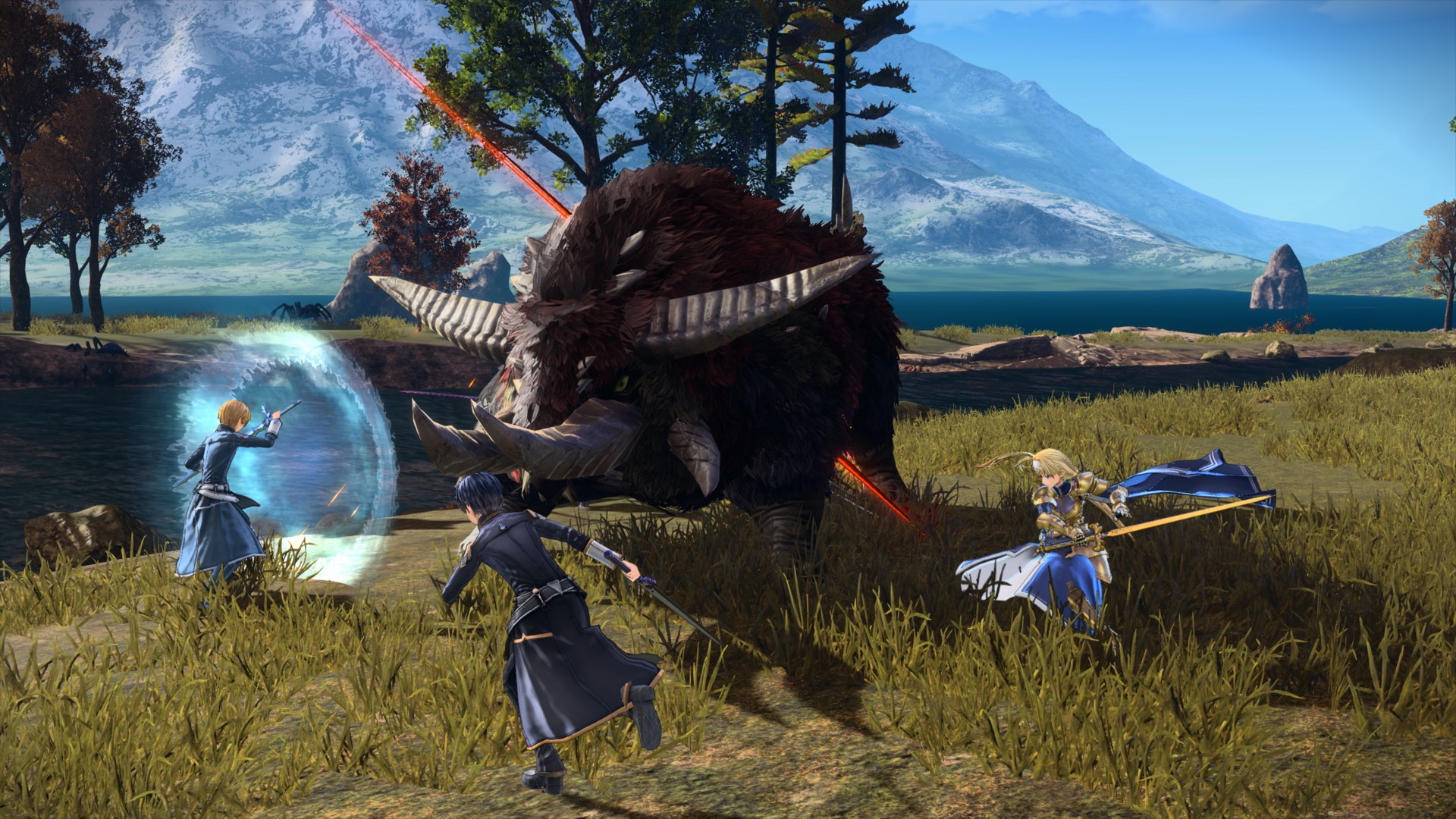 One thing I was most attracted to when I saw the announcement for SAO Alicizaton Lycoris were the upgraded visuals. When it works the game looks simply stunning. Bandai Namco and Aquria have made huge improvements since Fatal Bullet, the character models look fantastic and the various locations of the underworld are filled with depth and detail. I particularly enjoyed the variety in the environments, from snow-capped mountains to grassy knolls and sprawling deserts. For a fan of the series, going to visit these locations and seeing everything magnified and expanded has great impact, exploring places like Rulid village and the Swordcraft Academy and seeing the finer details clarifies that the developers want you to know they care about this world. Exploring these environments is worthwhile and rewarding, chests are dotted around that will give you newer and flashier weapons and armour, as well as chests you can come across statues that will award you skill points if you can complete the challenge they give you. Unfortunately, the execution of all of this detail needed some extra work, severe frame rate issue plagued combat and exploration, lengthy load times and frequent pop in of textures and NPCs makes playing the game a struggle at times. I played SAO Alicization Lycoris on a high-end PC and Playstation 4 and experienced these issues on both systems.

The combat system is where the game truly shines, there are several systems at play that have been expanded on over multiple games and this entry feels like a culmination of everything the devs have learnt. Its complex and takes a while to get the hang of, there are systems that are briefly introduced and not mentioned again, but once you do get the hang of it, when everything comes together combat feels fantastic. Combat is action orientated with RPG like mechanics, you can perform basic attacks with your weapon and Sword Skills that you can string into combos. Sword skills are your damage dealing attacks so learning to keep them flowing as much as possible is your way to victory, using your Sword skills at the same time as a party member creates a chain burst that gives you a damage multiplier. Combining this with other mechanics like Sacred arts (magic), aerial combos and breaking the guard of your enemy, enables you to deal the most damage. One of the combat system’s greatest strengths is in the fluidity of your approach to it, you have a great deal of room to decide how you want to fight, what weapon you want to fight with and who you fight as. Like I said, there is a huge depth to combat and a lot to learn. Thankfully the pacing of the game gives you time to work with a new mechanic and get used to it before you unlock something new. 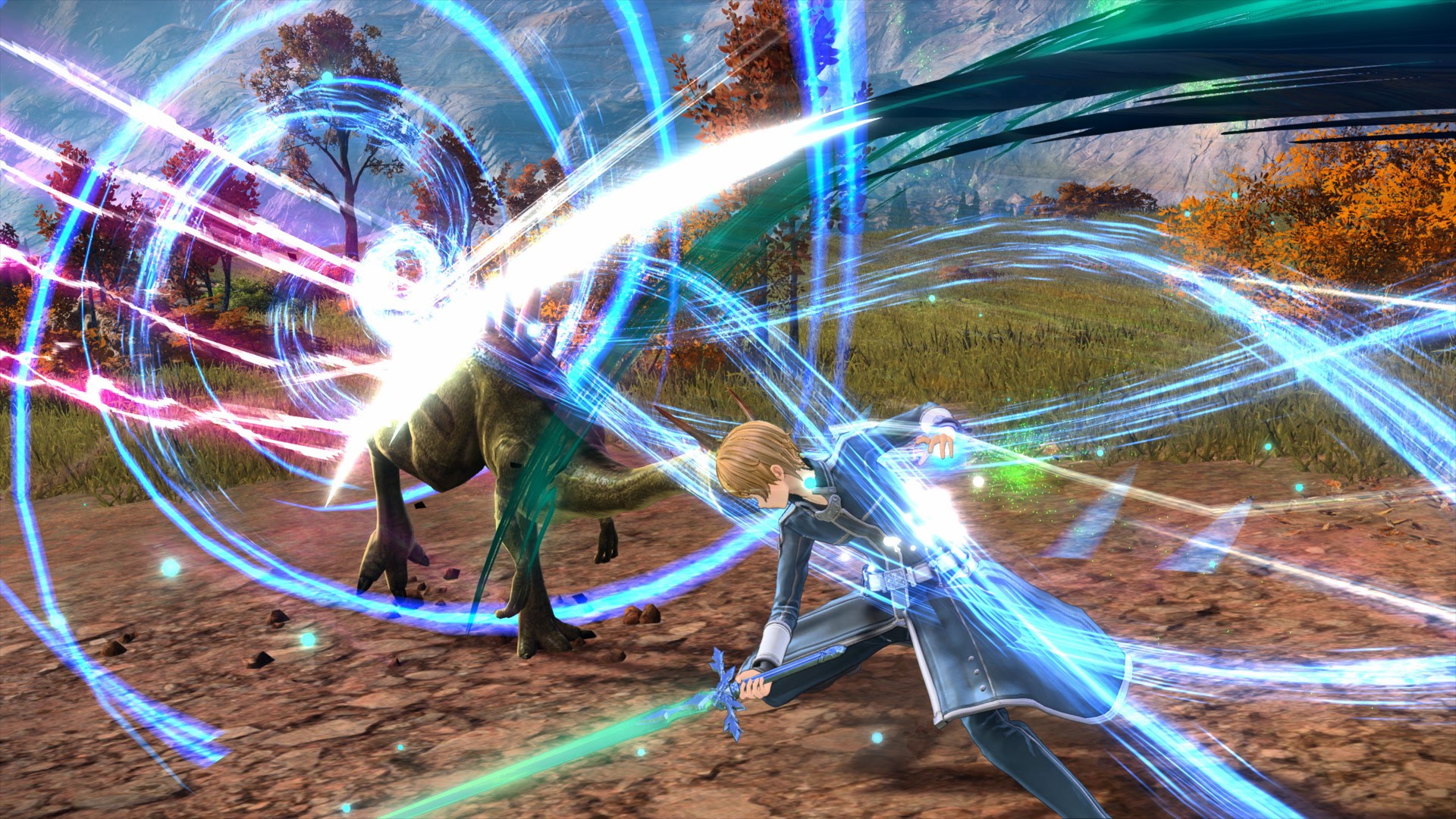 Another great feature that was present in previous games and has been expanded upon in SAO Alicization Lycoris is multiplayer, in this game we have the best multiplayer there has been in an SAO game. You can team up with up to four players and explore the world at your leisure, unlike previous entries you are not restricted to only running a dungeon or exploring one map. Multiplayer allows you to team up with friends and play how you want to play, I think this is such a great feature that needed an expansion and I’m very glad it has. Sadly, at launch matchmaking didn’t work too well, we weren’t supposed to be able to join people with more progress in the main story and all progress you make when you join another players world wouldn’t transfer back to your world but this wasn’t the case and actually broke the game for some people; myself included. Thankfully, this has now been patched and Bandai is addressing other bugs, like the frame rate issues and load times.

So Sword Art Online Alicization Lycoris has its issues, thankfully most of these issues can be fixed with patches. Bandai is clearly invested in this game which is clear to see in the amount of detail that has gone into the world and overall I am extremely happy with the work that has been put into this title and it will be a game that I will continue to go back to. In most cases the game is stunning, the combat has great depth and is rewarding; the world has been faithfully recreated, filled with stunning vistas and NPC filled towns and the main storyline has enough intrigue and emotion to push you into the final stretch. My only real worry from the perspective of a newcomer is chapter one. It is a hurdle and at times painful, but if you can push through it what awaits you on the other side is the best Sword Art Online game to date.

These problems coupled with very long load times make for a frustrating experience at times, even so I enjoyed my time with the game, for the most part.

In most cases the game is stunning, the combat has great depth and is rewarding, the world has been faithfully recreated, filled with stunning vistas and NPC filled towns and the main storyline has enough intrigue and emotion to push you into the final stretch.