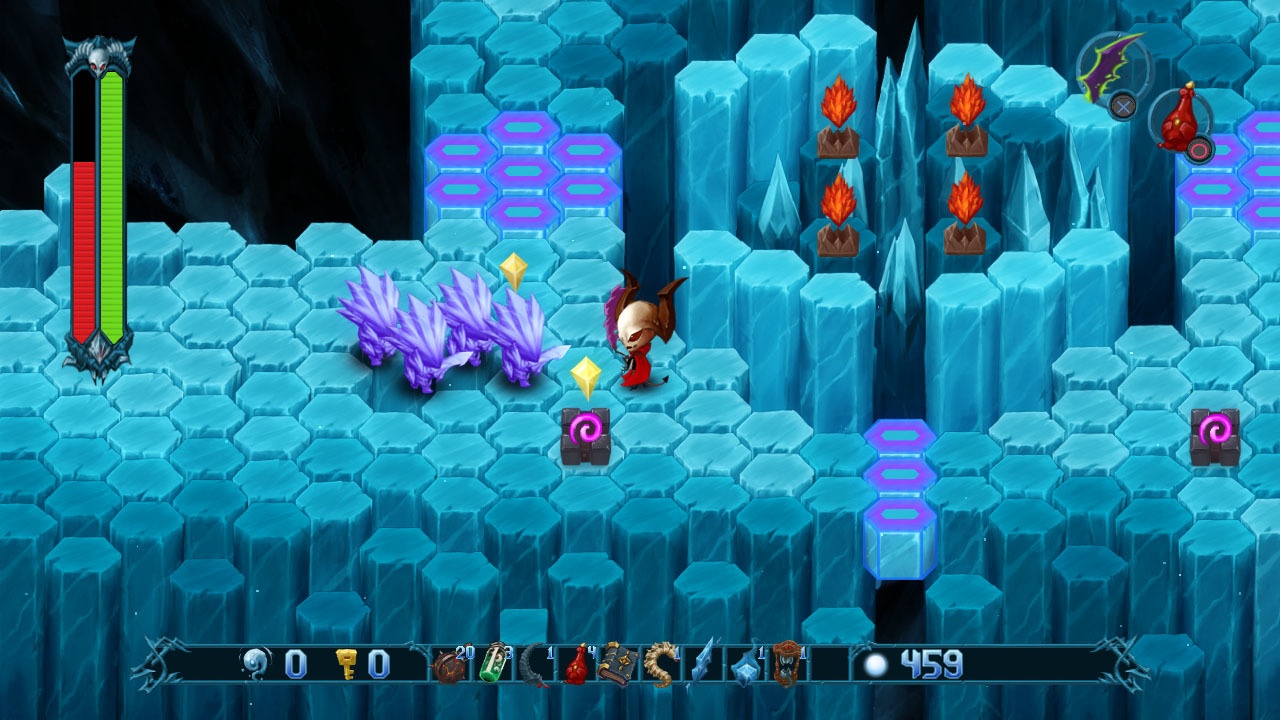 It’s fun to be the bad guy on occasion, isn’t it? And I don’t mean the bad guy who sees the light and becomes repentant and turns out to actually be a good guy. We’ve got too many of those in this universe, showing a very unfair predisposition to pigeon holing villains as one good TED Talk away from being on the “right” side. To hell with that! Sometimes, people are bad guys, and they love being bad guys, and they don’t believe their side is the actual good side, they know it’s bad and they love it anyways. It takes a bit to find any sort of game that really indulges that perspective, so I appreciate Lifespark Entertainment for wanting to bring that perspective to us. Sometimes you’re the Silver Surfer, and you secretly want to do good and do right. But other times, you’re one of the other Heralds, and to hell with everyone else, you’re finding meals for Galactus and that’s damn good enough.

In Rack N Ruin, you play Rack, a delightful little demon hellbeast who loves nothing more than to spread chaos and destruction in the name of his master, the netherlord Ruin. However, Rack’s perchance to destroy everything sort of leaves Ruin in a lurch: he can’t really subjugate an entire planet if Rack blows the damn thing up. Therefore, Ruin leaves Rack with one last chance: go down to this planet, defeat the leader and leave the masses mostly alive to live in abject fear of their new God. It pretty much goes without saying that Rack will not follow these orders to a T, but let’s have a bit of disbelief and pretend things are going to go as planned.

The developers describe Rack N Ruin as a top down shooter with adventure elements and a touch of bullet hell, but I think that’s not a particularly good description. It definitely gave me more 16-bit Zelda vibes, especially with the way the game unfolds. You have a general idea of what to do, but no real direction or way to figure out which path is best until you hit a dead end. You need to venture about, killing monsters and enemies while amassing a fortune to buy helpful new things and also finding some spells and items to deal with the mobs. There are doors and pathways that won’t open until you find certain attacks, and some doors that just straight up won’t open until they feel like it. As Rack ventures about, he can interact with some of the denizens of the planet (unsuspecting villagers who are about to be enslaved or annihilated), giving you a small amount of exposition and also humor in terms of the ridiculous exchanges (more on that in a moment). You definitely will benefit from having twinstick experience, but it’s not a necessary trait in order to dive into the game, especially once we break down the mechanics of the game, which might be my biggest rub. 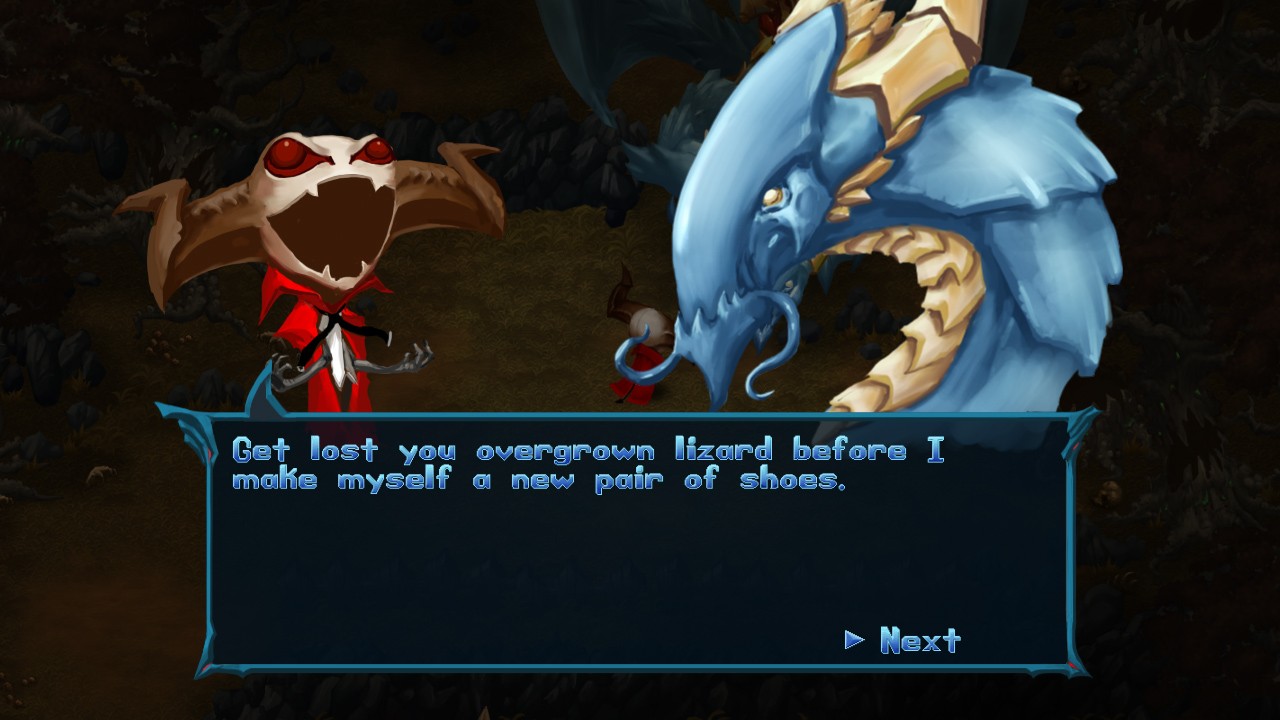 So, for Rack N Ruin, you walk with one stick, aim with the other, and fire two different sorts of weapons, plus an additional telepathy skill that’s needed for some puzzle solving. The primary weapon is a versatile spell that changes with what you find and what you buy, shifting from long distance missile attacks to melee swipes and chained lightning, plus a couple other forms. The secondary weapon is a limited number pickup that can take on many forms, including not being a weapon at all. Summon an orbital attack tower, use a heal potion, drop a bomb, anything is possible, and the pickups are very, very plentiful. When you’re using the primary attack, you can opt to just fire with your own crosshairs or use the auto target lock, which is a weird mixture of finicky and too helpful. If you’ve just got the one big mob to deal with, you can easily dance around them while plinking them to death without a lot of worry. If the room is beset with many monsters, you can easily get frustrated trying to shift the auto lock to the next monster when another is beating down on you. Moral of the story is don’t rely on the auto target to be your best friend. Also, the hit boxes are all over the place for melee weapons, so don’t get too comfortable with the sword-spell you pick up early (and don’t be afraid to get close to enemies, because they’ll miss you more than you’d expect).

As for the puzzle solving element, Rack N Ruin doesn’t really bring too much heat or complexity with the idea until much later in the game. For the most part, as long as you recognize symbols and can match up pairs, a vast majority of the telekinetic block moving is pretty cookie cutter and over the plate. One thing I did like is that, most of the time, you were able to move the blocks from a safe spot without being needled by enemies whilst in the middle of a psychic trance. Good design aspect, and one that sometimes made for some good surprises, like finding out I would teleport to wherever I next moved a certain block, or that I could set up a series of explosions by putting the blocks in the right areas before attacking them. This whole thing was kind of a push for me: novel, but not groundbreaking in any major way, so it didn’t affect my gameplay in a negative nor positive light. 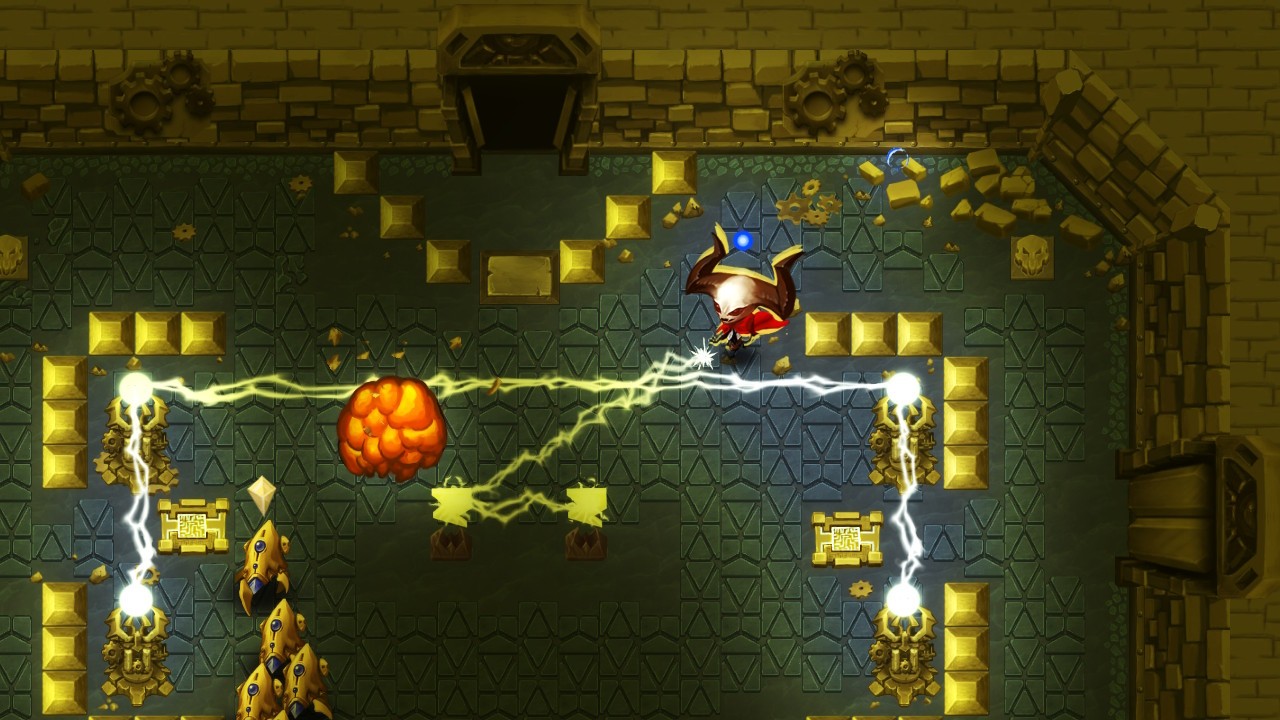 Lest you think I’m coming down too hard on Rack N Ruin, there is a lot about the game to love. Firstly, the design and concept are done in a way that made me happy to play it. Everything has a nice gothic cartoonish fashion to it, not too round and goofy but not so angular that I felt grim and dark was the key element. Rack himself is a delightful protagonist, and reminded me a lot of Invader Zim and his own wanton destruction, bizarre identity crisis and the need to wish mayhem on everything and everyone. The difference is, though, Rack delivers in a big way once he gets going. The game starts off simple enough, and, through the first hour or so of gameplay, you build up a pretty sizeable arsenal of items and spells, and you attune yourself to the buttons and how they all work together to make Rack a one being army. You quickly move between the different attack spells, murdering near and far, and you can move surprisingly well and with good agility despite the pace of the game never really getting too fast or frantic. Easing into the madness through some great interactions and gradual intensity is effective, letting the player get their feet wet while learning to swim.

Plus, the bullet hell elements of Rack N Ruin were surprisingly well done. I sometimes think that trying to incorporate danmaku into games where it doesn’t belong ends in tragedy, but this actually made both mob and the more vicious boss battles even better. Out on the over world, you quickly learn how important it is to take out the bullet spraying mobs first, weaving through projectiles and other enemies to take out the source. Getting to the bosses themselves, you have to change gears and turn from directed napalm into something of a cautious, explosive sniper. You learn the patterns, know when you can attack, figure out trajectory and try to map your own pathway to survival in order to make the most out of things. Players with a lot of history in the arcades (or in the land of Touhou) will have no issues here, but it was a fun aspect that kept me on my toes and prevented the game from feeling too predictable in terms of action and hack-n-slash. If you opt to turn the game up to Hard mode, the bullets really become pretty dense and it felt like health bars were longer, so feel free to challenge yourself right off the bat. On both difficulty settings, you still have the safety net of respawning in the same vicinity (with already defeated enemies taken care of), so go nuts and enjoy.

Rack N Ruin is a decent little delight that feels like it’s doing what it needs to do in the right capacity. It’s fun and engaging, but not too much that you can’t put it down for a while to do something else within your scope. It’s a cool indie game that obviously isn’t going to dethrone some of the big boys, but it’s happy to be a runner up, and I think it merits much more than a participation trophy. A slow start, with a very strong middle and a satisfying end, there’s potential for replay, a strong soundtrack that atmospherically captures Rack’s rampage, and the portable aspect on the Switch makes for a great tagalong game for a longer road trip or doctor’s office wait. Go on, embrace your inner bad guy and go make a damn mess. That’s what Rack would want.

Good, good! Feel the hate flow through you as you bring destruction to an unsuspecting world in this top down adventure with plenty of action to spare.