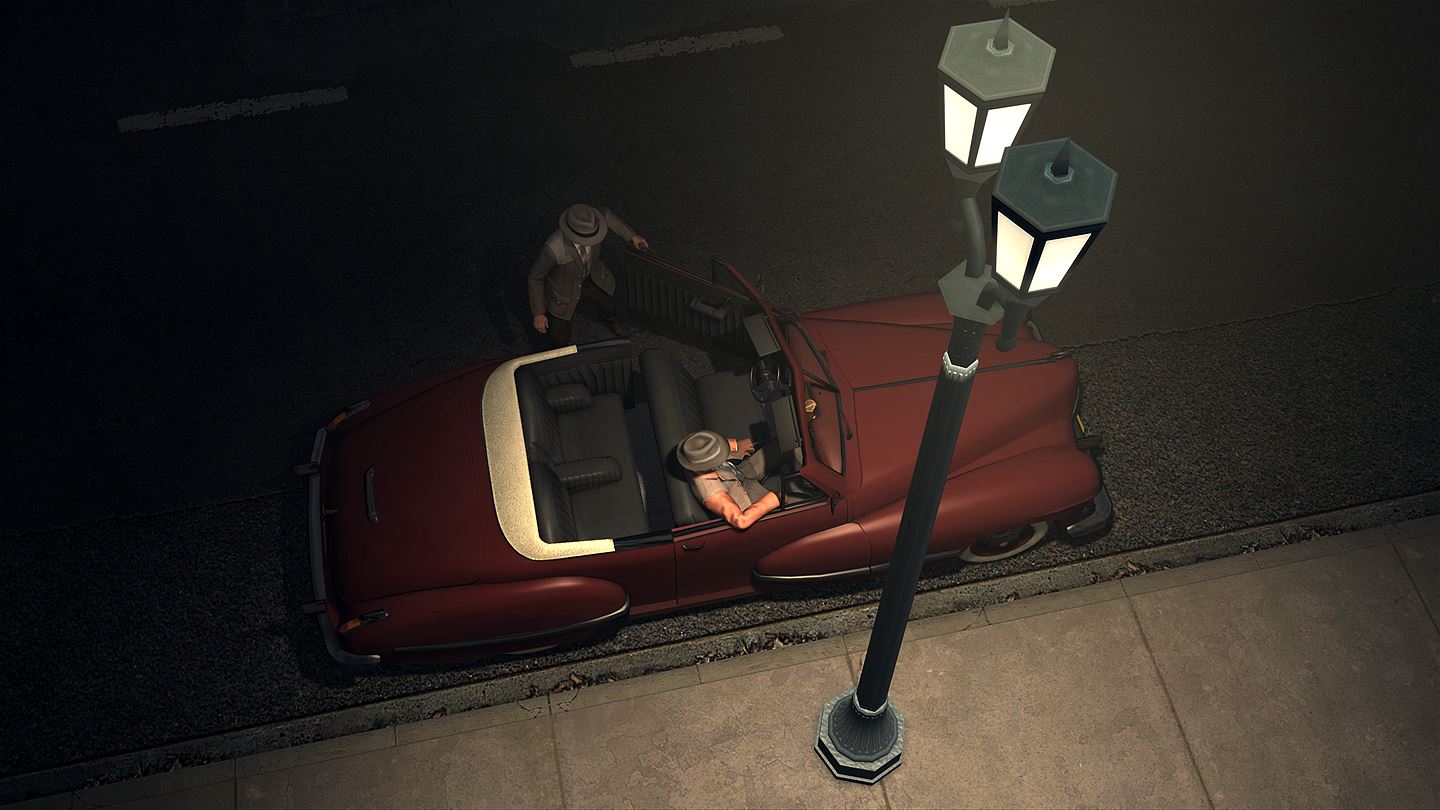 It’s impossible not to romanticize the films of the noir generation. The intrigue and darkness were still fresh in the minds of the American people. Having just come out the other side of the largest war ever (yes, they were late to the party, but whatever). The curtains had been flung back to the window of the world and, for the first time, Americans knew that there was real crime happening, everywhere, and the petty incidents that occurred in their hometown paled to the crimes of “the big city.” So detectives, mob bosses and dames with two faces became the norm, and everyone was in love with the smoke-filled cinema, ready to deliver tales of deception and anti-heroes. From there, we can fully set the stage for the most honest homage, LA Noire.

Firstly, the full plotline of LA Noire is far too grand and sweeping to fully cover in a review of the game as a whole. Cole Phelps, war veteran with haunted memories, tries to find a new life and work in the private sector as a beat cop, exploring the gritty side of Los Angeles that appears after dark – and sometimes even in broad daylight. Starting out small and responding to run-of-the-mill call ins (if murder as your very first case can be considered small), the player is along for the ride to witness the rise of Cole to detective, his downfalls as a human being, and his honest shots at redemption as a flawed man in a world of corrupt monsters. Cole is never alone in these situations; he has partners, fellow service men, his wife, the rogue’s gallery he encounters, and even bitter acquaintances who still uphold the law. But, at the end of the day, it’s Phelps’ own decisions and his choices that leave him feeling isolated, and we, the players, can truly see and feel the weight of the world on this man’s shoulders.

One of the reasons that you become so empathetic to Cole’s plight is the way the game is designed. Besides being a jaw-dropping gorgeous rendition of 1950’s Los Angeles, LA Noire uses facial capture technology to turn simple AI and character interactions into uncanny valley levels of expression and speech. I know that, for a lot of PC and non-Nintendo consoles, this game is old hat and maybe some of the impressive nature has worn off. But, for people who’ve been loyal to Nintendo strictly, this is their first foray into the world that Team Bondi (RIP) constructed, and it’s a doozy of a step. You don’t realize how much you’ve lacked in browlines and mouth creases until you take a gander at this game and realize what nuance comes through when people tie their emotions to their words. When someone is merely speaking their mind, there’s so many relaxed muscles that you can’t help but trust their words. When a character is clearly coming up with a lie or otherwise getting defensive, it’s telegraphed through their eyes (with a couple of characters able to mask their emotions surprisingly well). It’s a goddamn trip, and I would recommend the game for that alone, if there wasn’t also so much more in stake. 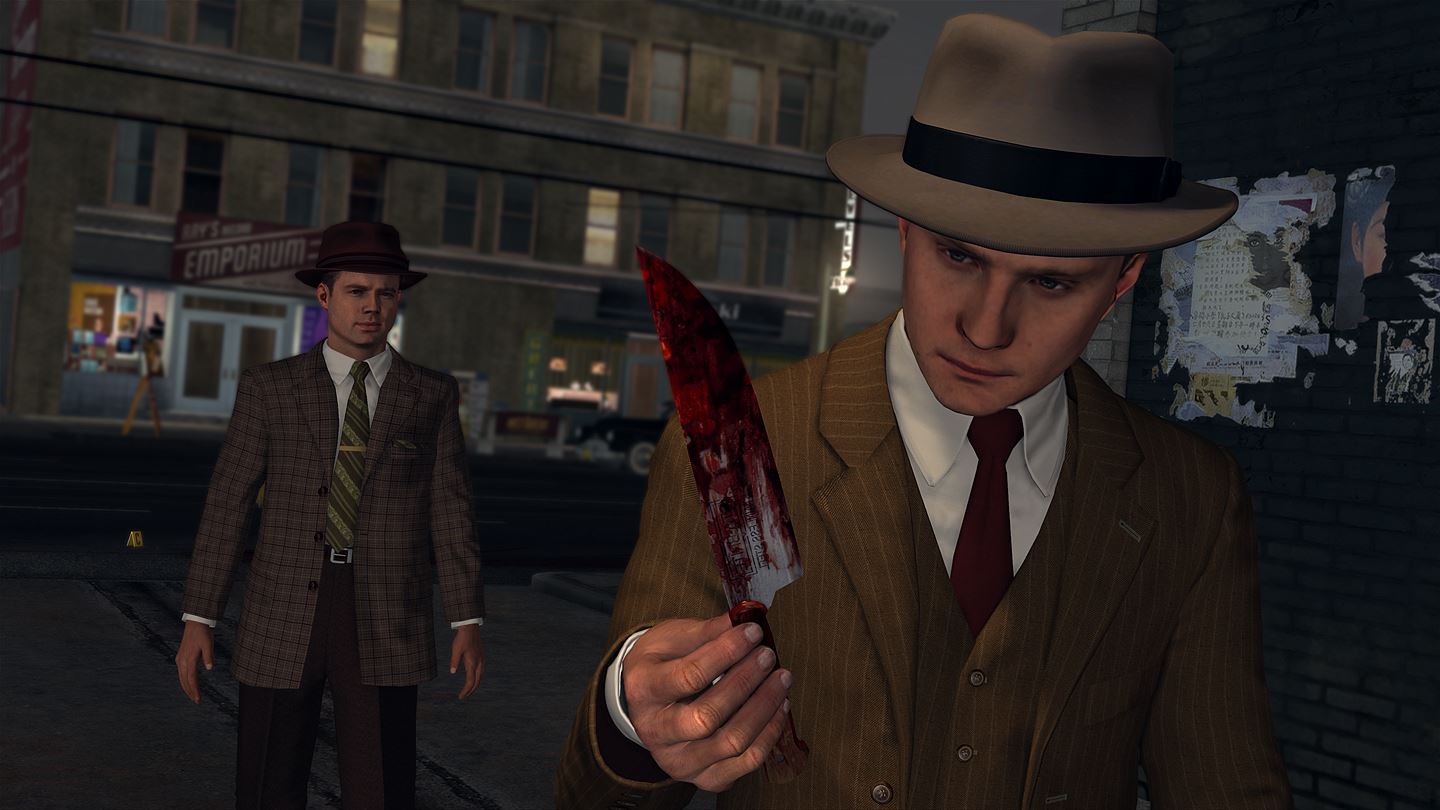 The journey through LA Noire is a long one, and a player needs to be ready for a lot, a LOT, of legwork. Coming in from a 3rd person perspective, you really get taken through the steps necessary to solve high and low profile crimes. Gathering evidence, inspecting items, taking notes and witness statements…that’s almost a half hour right out the gate, and things haven’t even begun to get interesting. Thank God this game takes place in the days before pure and heavy forensic science or I’d still be playing through that fourth case. Even still, the necessity to turn over every stone and really check for important details (which are conveniently signaled by rumblings in the JoyCon) is satisfying, through certainly a time sink.

And sure, there’s plenty of action – running, gunning, car chases, foot races, and fisticuffs when the perp doesn’t want to come quietly. Once you make detective, LA Noire really opens up and lays out the city at your feet, allowing for long form investigation that can literally take you across town on any given night. Players might see the Rockstar logo and assume this is time-traveling Grand Theft Auto. It’s not, we tried that once, it was okay at best. Despite a bit of liberty you get (and the penalties that can occur), this isn’t your “go nuts and kill hookers” experience that everyone enjoyed back in 2002. It’s huge, it’s expansive, it’s got so much to it, but this isn’t the be-all-end-all jaunt, so, if you’re just looking to cause mayhem in your parent’s era, hit pause and wait for the next trolley.

So it’s got action, it’s got detail, but many will argue that the key to the game comes in the interrogation room, where Cole needs to sit down and try to force the truth or a confession out of whomever he’s sitting across from. Remember this is in the 1950s; things like “rights” are still tenuous, and Cole can get downright violent when it comes to trying to crack a tough egg. Taking the “good cop,” route only gets you so far, and more than a few characters will play you like a fiddle if you come across too soft. Bad cop can get some people to sing, but you’d be surprised how many folk in the 1950s actually know their rights and will clam up in spite of some potentially serious threats. The action that’s best known in the game (and perhaps the most polarizing) is Doubt, which often results in you going full Elliott Stabler on a witness and almost breaking the carefully constructed mold of atmosphere that’s been made. There’s screaming, swearing and borderline psychotic behavior that comes out of “doubting” a suspect and, while it does get results, it’s ludicrous at times. I just can’t help but imagine the talents connected to each character, sitting in chairs somewhere, motion capture electrodes taped to their faces, and then hurling metal conversations at each other without any preamble, then needing to apologize and laugh it off before the next take. It’s really something to behold in game, and I commend the actors for their deliveries to make it work in game. 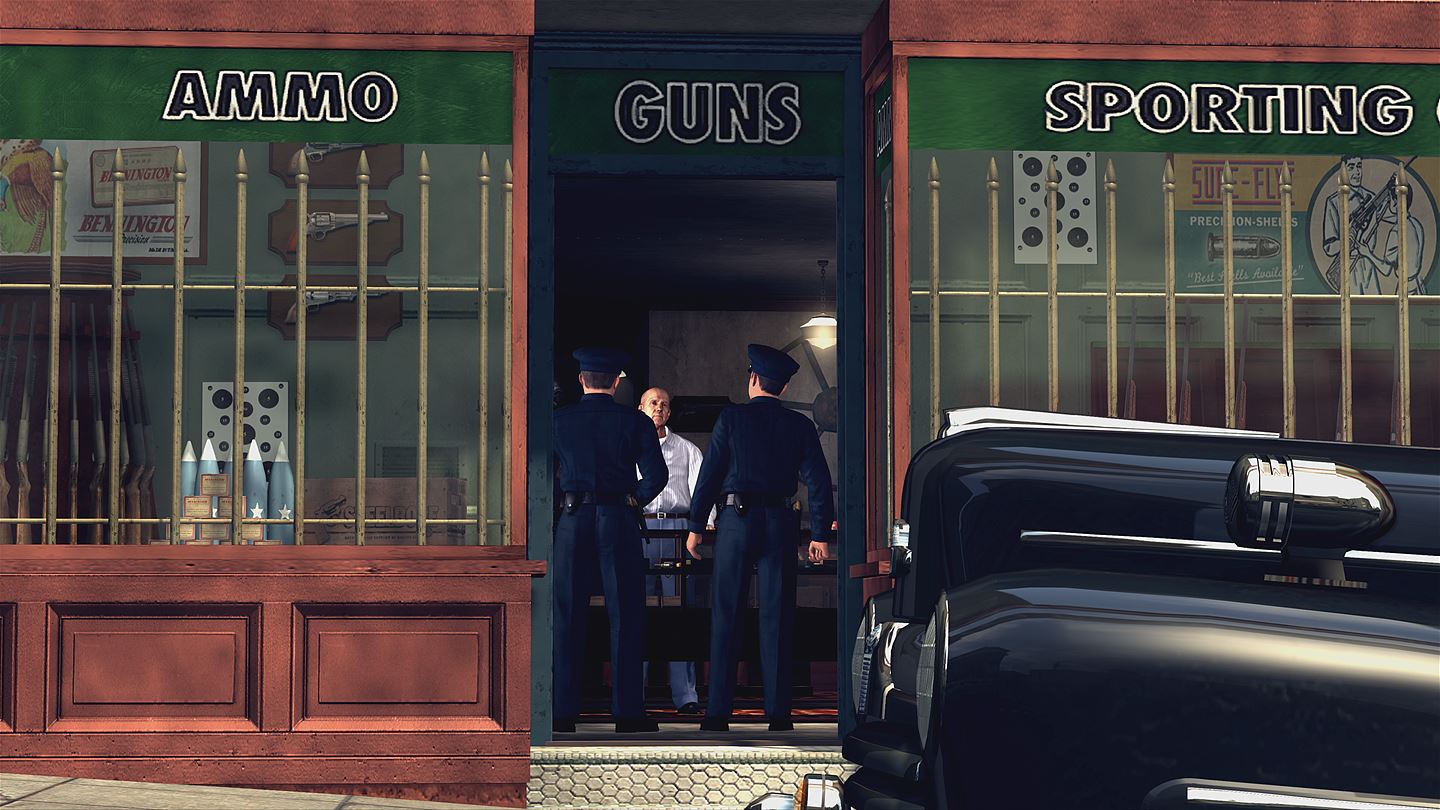 If I have a serious criticism for LA Noire, I would say “pacing” plays a large role in my frustration. This game is long: like, “every night after work for a couple weeks” long. And there are cases that seem to wrap up in minutes, while others take forever. This isn’t the issue. The issue is that Phelps’ life in the game moves at an erratic pace, bringing players along at a crawl and then sometimes whipping through huge leaps in what feels like seconds. I feel like the last couple of hours of the game covered so much ground in such a relatively short time that the first half almost felt irrelevant in comparison. I get that we wanted to see the rise of our character to success and great heights, and it helped to bring him crashing down, but, in lieu of actually playing and experiencing it, it could have been boiled down into a 10 minute cut scene at the beginning. And there are already plenty of moody, horn-filled cutscenes as it is, so one more wouldn’t kill us. I know this’ll draw ire from longtime fans of the game, but, as a newcomer on a portable system who needed to give up 30GB to fit this game on (so long, Fire Emblem Warriors), it was insane to try to justify so much wasted time on my plate.

Having said all that, this was an absolute trip to play. LA Noire gives an experience that is hard to match or compare to anything else, especially anything else on the Nintendo Switch. This isn’t a fun jaunt through space or an epic quest across an enchanted land, this is as real as it gets without actually joining the police force. Rockstar took one of their best titles and brought it to the Switch with flying colors, which you can turn off for that real “black and white” noir feel. If you’re at all interested in an engrossing storyline that doesn’t involve magic or talking animals, then grab your cigar and your snub-nosed revolver: it’s gonna be a long, dark night.