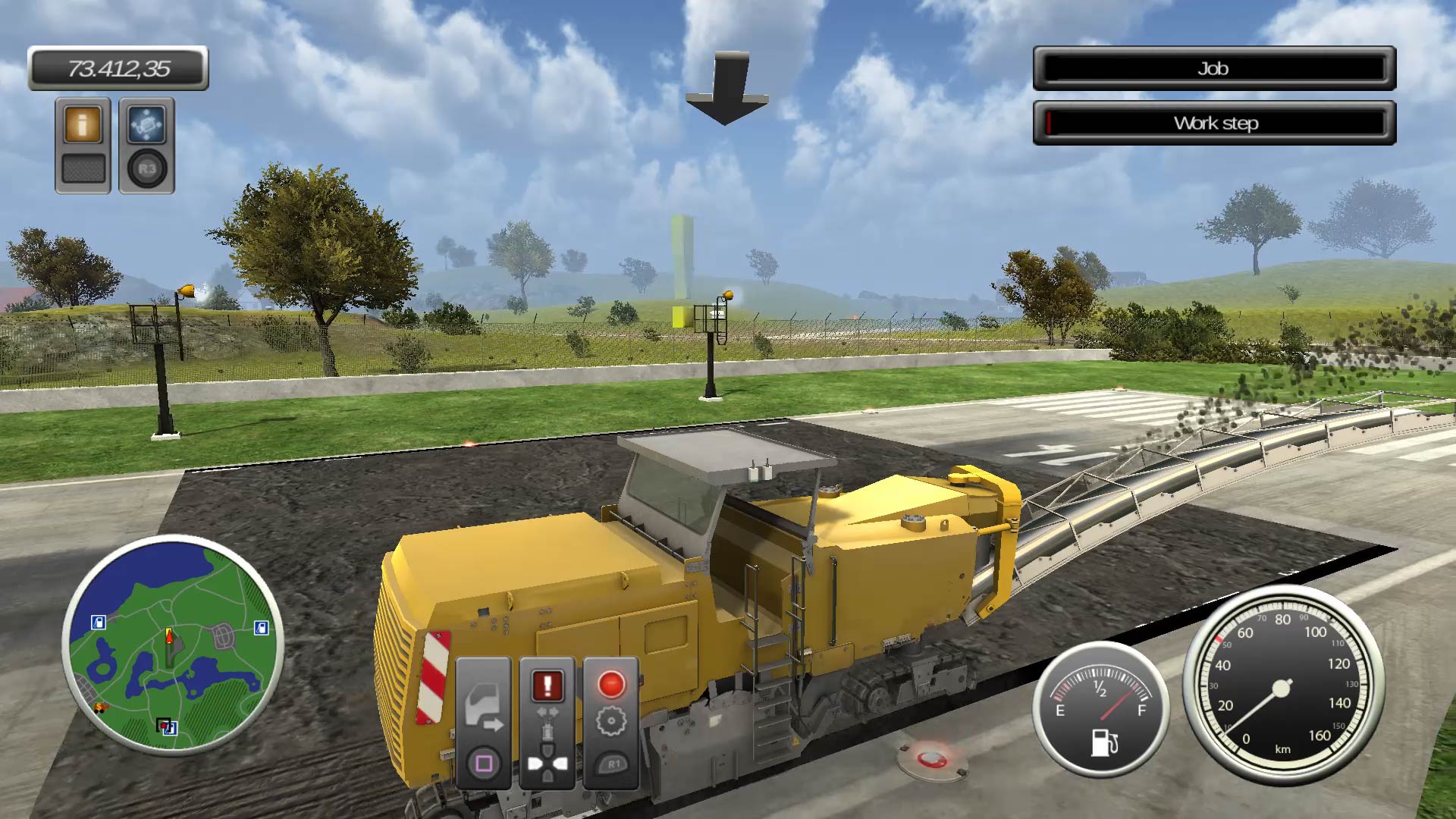 I’m not too sure why I keep punishing myself by asking to review these games. I think it’s probably because I had a surprisingly good experience with the first simulation game I asked to review as a joke; Farming Simulator 2017. Visually, it looked great. Clearly a lot of effort had gone into making the huge array of real-world-brand machinery and equipment look realistic, growing and selling crops felt satisfying and allowed me to slowly purchase huge swathes of not one but two artificially populated virtual cities. Sure, there were a few rough edges here and there, but overall Farming Simulator 2017 did what it said on the tin and did it well.
After that, things went downhill. Fast. Eager for more virtual manual labour, I tried Forestry 2017 – The Simulation, made by UIG Entertainment. As soon as I installed the game, I felt like someone had violated me and my PS4. It was an abysmal pile of runny crap; a shameless cash-grab designed to con as many people as possible. It was an extremely poor product, a title dressed up to look like an offshoot of the well-made farm sim games made by Focus Home Interactive. A title that managed to make chainsaws boring. Professional Construction – The Simulation is unfortunately more of the same. 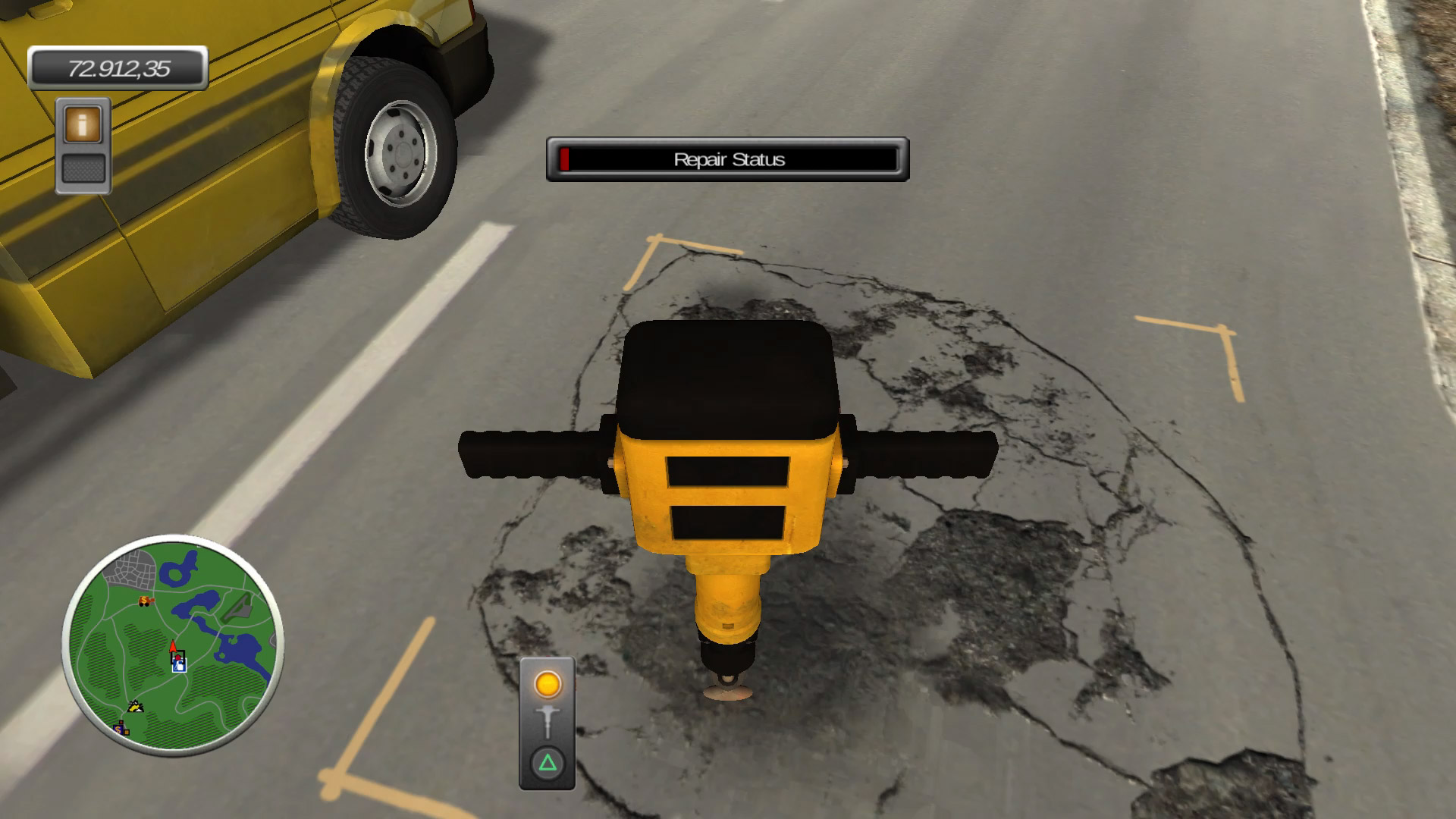 Gameplay consists of taking on construction jobs around the city and completing them for cash. You then use this cash to buy different construction vehicles, allowing you to take on more jobs. The starting vehicle has a pneumatic drill and a tarmac roller thing in the back, which you use to repair potholes dotted around the lifeless ghost town you are tasked with fixing up. Once you earn enough cash, you can buy the dump truck and start lugging around various materials such as gravel and sand to different points on the map. Some of these initial ‘missions’ will require upwards of four loads of materials to be dumped at a certain point, and when your truck is full the speed tops out at thirty miles an hour. Be sure to block out an hour or so of your life for this, because once a task has been started you can’t save.
After that it’s up to you. I went ahead and bought a bulldozer for the next mission, then spent roughly two hours using the pickup truck to cart eight or nine loads of gravel to the opposite end of the map. I was then told to spread this pile evenly across a parking lot using my bulldozer, which was at home base. I travelled home, hopped in the ‘dozer and spent god-knows how long driving to the destination at just under ten miles an hour. I tried to bulldoze some tiny trees along the way, only to come to a dead stop as soon as I hit them. With a bulldozer. When I finally got to the parking lot, I spread the gravel until there was nothing left to spread. Then nothing. The game must have glitched out or something because no matter how many times I rolled over the pile of rock I was told to deposit and spread, I didn’t get paid. I restarted the game.
I bought an excavator to test the physics out a little bit. Maybe I could just dig a hole or something. Some of my fondest memories as a child involve me playing in the sand with a toy digger. I got in and brought the mechanical arm down towards the ground as far as it would go. It clipped right through the road. No rubble, no resistance, just straight through. I tried to flip my flatbed truck and got the same result. Straight through. You can use it on jobs to dig holes in designated spaces and that’s it. The cement mixer you see in the picture below? It drives at the same speed as the bulldozer and is used to fill holes that you dig with the excavator with cement. When you are told. The pouring arm clips through the mixer on the back like it was made of mist. I managed to complete one of these jobs without committing suicide. I didn’t risk chancing it again. 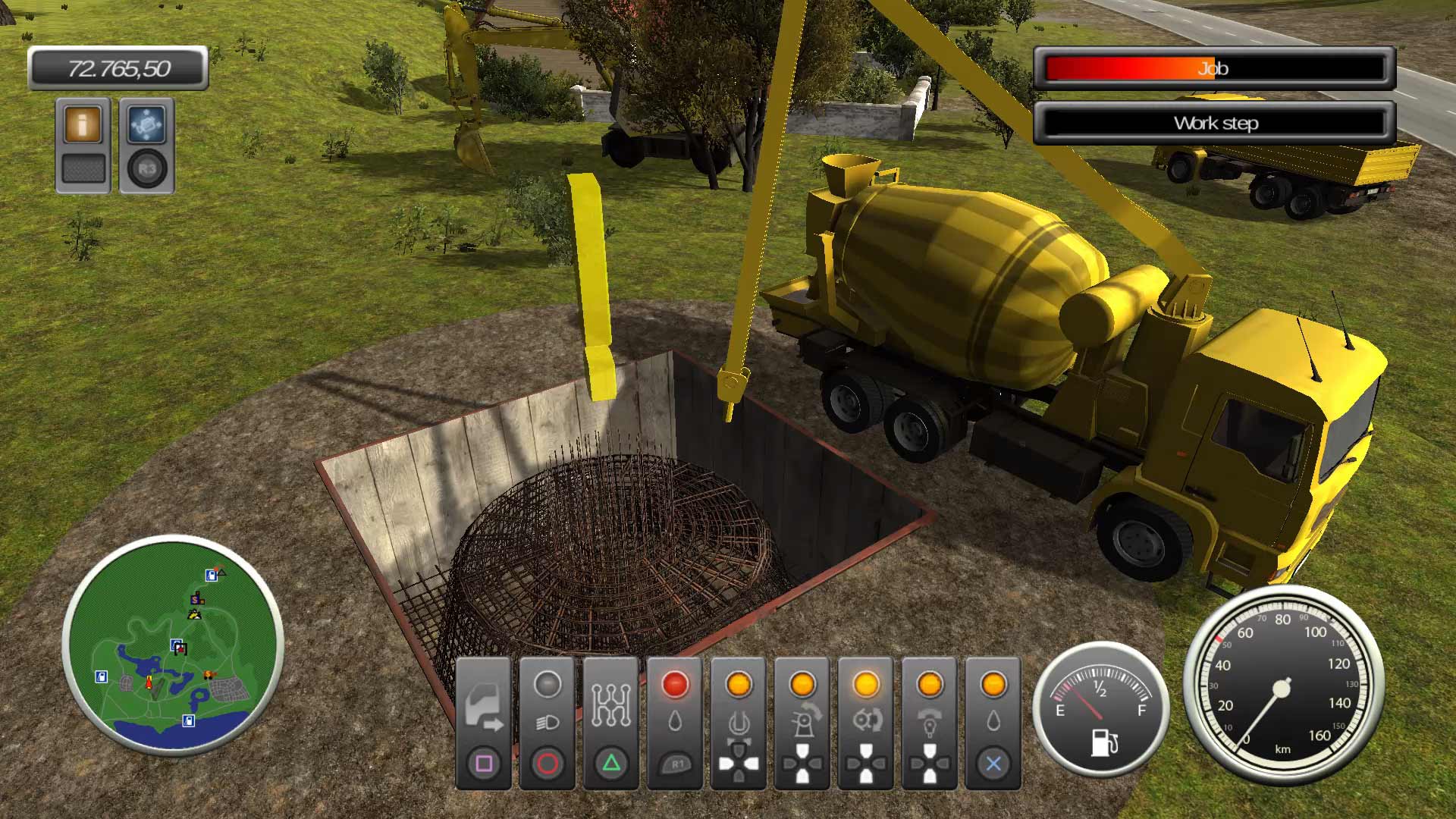 The sound design is a joke. The music consists of a bunch or random sound bites that vary from ten seconds to a minute in length. Some are power rock clips, some are country. There are some nature sounds that play, but only if you don’t turn down the volume on the music.  All the vehicles sound the same, or close enough that I couldn’t tell if there was a difference. The game also looks like something you would find in a toilet. The draw distance is shockingly close and extremely noticeable. The machinery looks blocky and generic. The town is full of jagged edges and devoid of any life bar you. Even then it’s like the vehicle is haunted or something, because there is never a driver present.
Please don’t be fooled into buying this game. This is not a joke review. This game is trash. It’s worse than trash. I played it for far more time than I reasonable should have, and it didn’t get any better. The most ‘enjoyable’ part of the game is fixing the streets with the drill and the roller. Sometimes when you do, your flatbed truck sinks into the ground like the road has suddenly turned to quicksand. You can jump in to save it if you are quick, but if you don’t it’s gone. You have to reload. I have nothing good to say about this game, and I’m fairly sure I’m not alone. UIG Entertainment should be ashamed of themselves for trying to charge anything at all for this rancid goat-turd of a game, let alone twenty-five quid. I could have been doing anything at all with my time and I played this. I feel dirty.