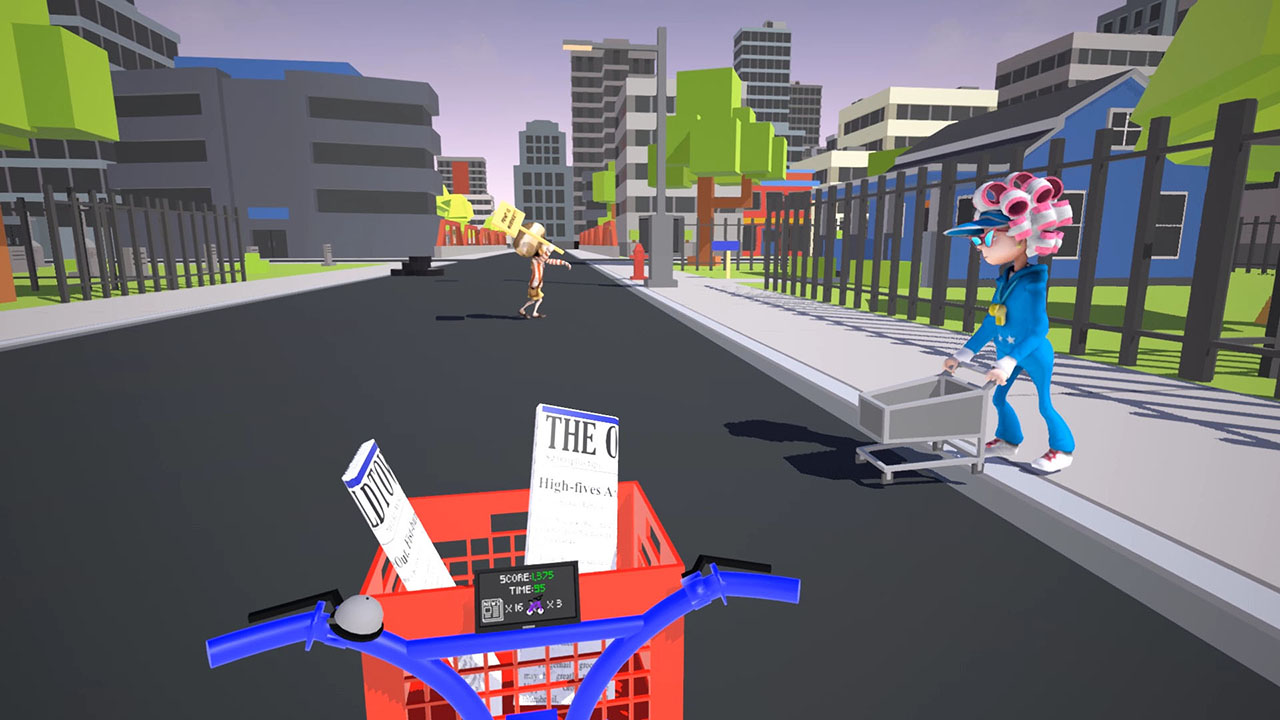 Special Delivery and I did not get off to a good start. I was excited about this game – yes, in part because of fond childhood memories of Paperboy, but also as it fully supported the PSVR Aim Controller, which had lain dormant since I finished with Farpoint. I set up the controller, started the game and… no response. I could see a retro representation of an arcade machine inviting me to choose my control input, but the buttons were not responding. In the end (and after much effort), I found that I had to start the game with the Dual Shock controller, and only then activate the Aim Controller – not the easiest of tasks with a VR headset on.

And therein lies my major issue with this game and one which will frame this review – a lack of basic guidance. I had to figure out navigating the control set up and menus myself. That would be fine if they were intuitively designed but they are not. Without trial and error, patience and Google, I may well have been left stuck for a long time.

Once I was past the opening menus, the basic game was as I expected. Sitting on the saddle of my virtual bike, I was a newspaper delivery boy, trying to navigate my route as quickly and efficiently as possible, tossing newspapers into mailboxes, onto to lawns, and hopefully not through windows. Once it was up and running, using the Aim Controller was fun. In game, it worked much like a t-shirt gun, launching newspapers towards the target. It also eliminated the need to look in the direction of the mailbox to aim, allowing me to keep my eyes on the road and the numerous obstacles in my way.

I soon encountered another issue with the game, however – steering. This is done by leaning to the left and right with your VR headset. Unfortunately, the default setting is not very responsive and only gradually veers your bike off to the side. This makes it difficult to avoid obstacles (especially the ones that move) and almost impossible to pick up bundles of newspapers so you have enough copies to complete your deliveries. 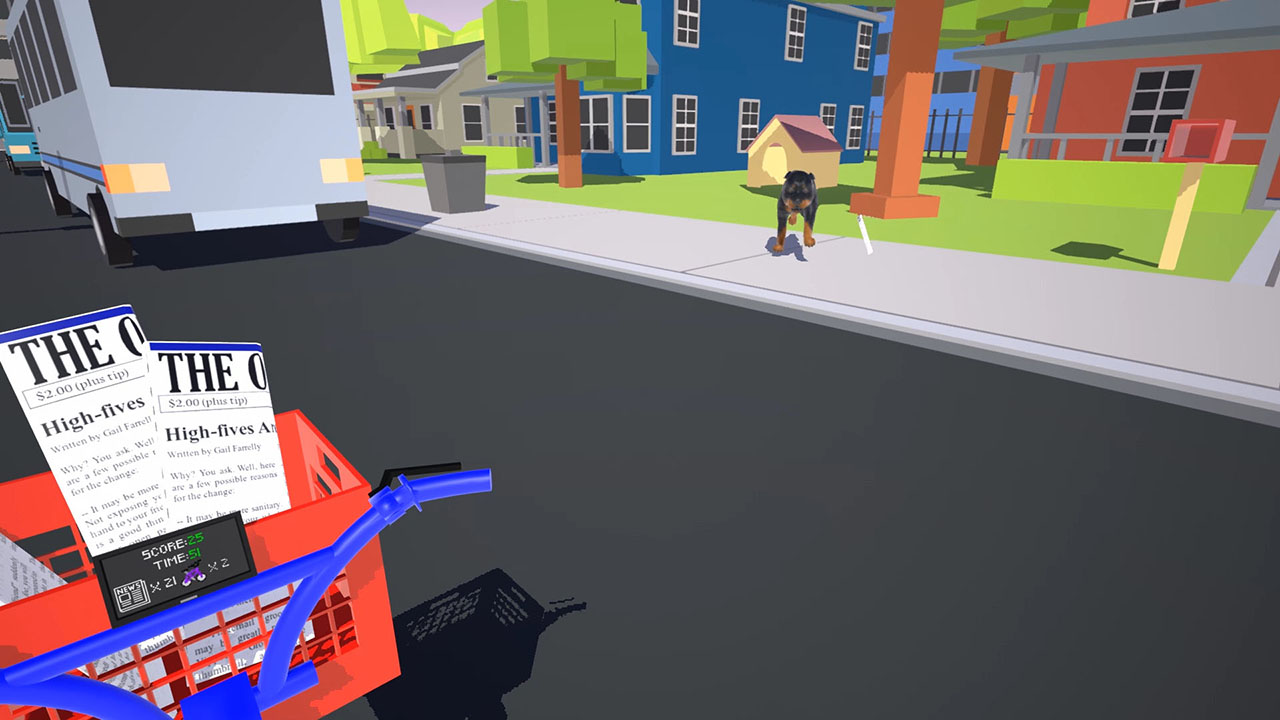 I was playing this on version 1.04, which has an updated options menu allowing the player to increase the steering sensitivity. However, in another example of a lack of basic guidance, there was no indication of this. The settings menu appeared to only feature sound options and it was only after viewing a video online that I realised there was a tab to go to control options. I was finally able to set the steering response to ‘fast’ and the game suddenly improved. It has to be said though that without that online video, I would probably never have found the setting.

Although this improves the game to an extent, there are other flaws that persist. Chief among them is collision detection. I found myself constantly infuriated by getting wiped out by objects that I seemed to be clear of. I veered around a workman on the street, for example, only to be felled in a ball of flames presumably by one of the mini traffic cones around him (even though I was sure I had skipped around those too). At one point, a tornado appears in the middle of the road. This was almost impossible to get past, even when there was a clear gap between my paperboy and the vortex. Only mounting the pavement was a sure way to avoid it. Respawning was also an issue as several times, my paperboy was dropped right in the path of the tornado again with no hope of escape, even with fast steering on.

Some dangers were unavoidable. Vehicles sped towards me incredibly quickly and even the highest sensitivity of steering could not save me. Tyres rolled out from the side of buildings and cars came from behind to wipe me out suddenly. While I soon learned to brake ahead of the intersection (again, the brakes are not very sensitive) these other dangers were harder to predict and I relied on memorisation or luck to get by unscathed. 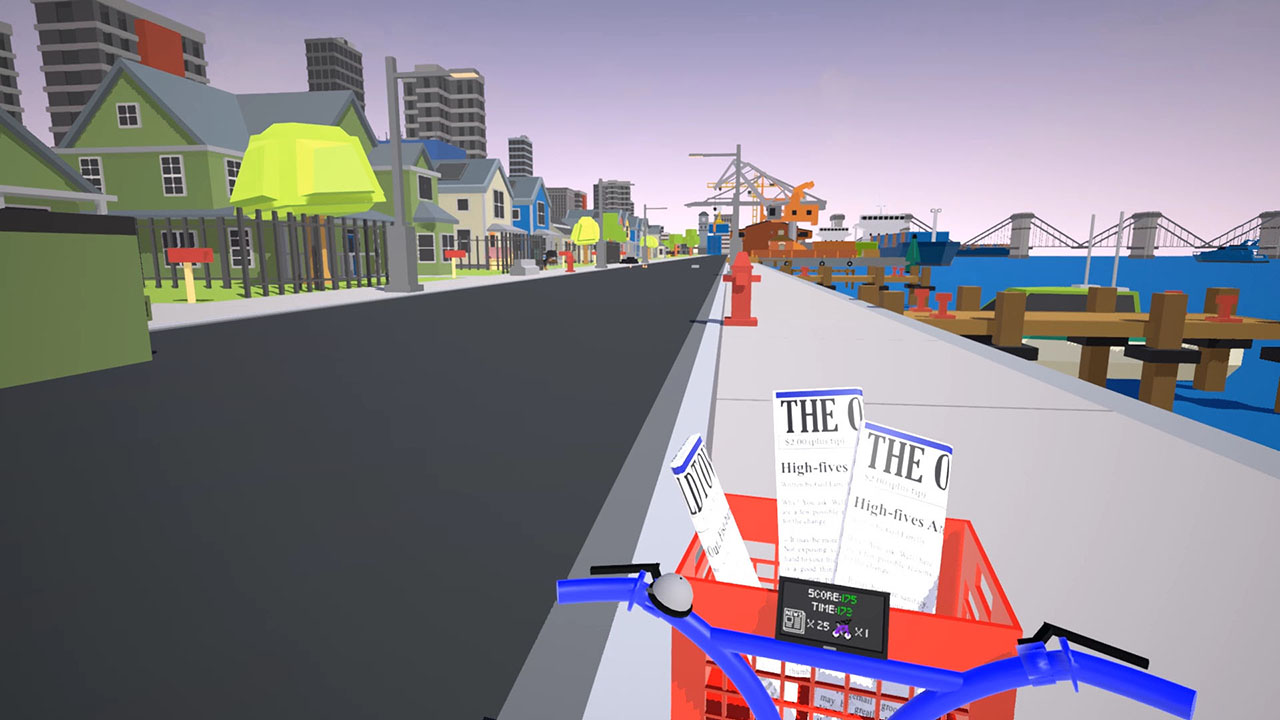 You can pick up bonus points by hitting other objects in the game – fire hydrants, passers-by, parked vehicles, and more. This provides some amusing moments as the workmen over-react to a newspaper on the bottom, as well as a genuinely panicky moment as a rottweiler bears down on you as you desperately try to scare it off with a newspaper to the nose. Alas, there are more frustrating moments here as well. At one point, I scored a direct hit on a fire hydrant for 25 bonus points. It burst, and the release of water knocked me off my bike bringing with it a penalty of 100 points. The water was still spraying after I respawned, and I was knocked over again after swerving to avoid an oncoming car.

With plenty of time and patience, it is possible to get through the course with only one or two wipe-outs (completely accident-free runs are extremely rare though). That does bring into question progression in the game, however. Eventually, after seven days of deliveries, a new zone of the map unlocks. You get there by crossing a bridge at the end of your current route… a looooong bridge with no obstacles and no deliveries. You still have to traverse the original part of the route and if you lose all your customers, you go right back to day one. That makes the game get repetitive very quickly. I did not get through the full game simply because I got fed up of going down the same stretch of road over and over again.

There is potential here for a good game but that is all it is in Special Delivery – potential. The developers have made updates, such as adding an option for adjusting the steering sensitivity, but there are still fundamental flaws in the game. The controls are difficult and at times unresponsive, the dangers are numerous and at times unavoidable, and the collision detection is off both for when you get hit and when you aim your newspaper to within millimetres of where it is supposed to go but no delivery is recorded. I doubt most players would put up with the game for long enough to persevere with it, meaning Special Delivery fails to deliver.