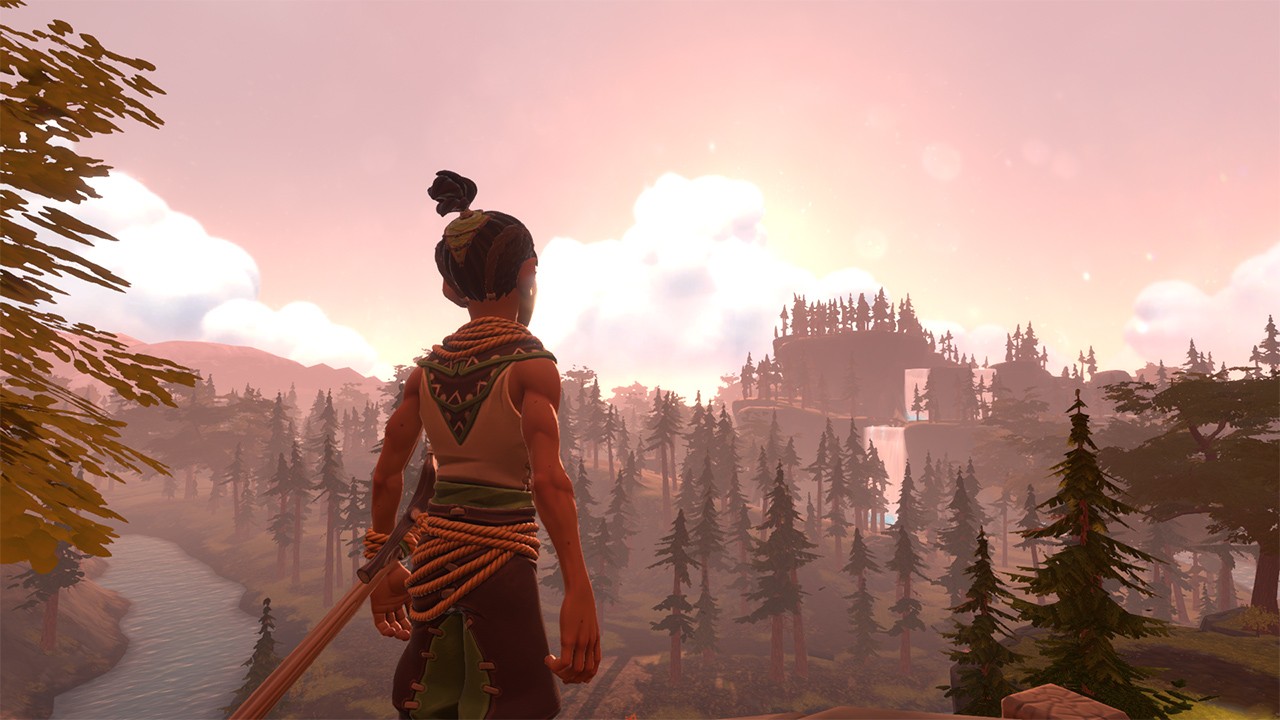 Role-playing games have come a long way from their beginnings of text-based adventures and dungeon-crawling escapades. These days, their scope is simply staggering, with expansive lands to explore, interactions that dictate the overall state of play and hours of gameplay to keep you invested in the long term. However, many of these titles belong in the band of triple-A titles and, while very playable, indie games have a hard time keeping up with the Jones’. Developers, Twirlbound and publishers, Kongregate are attempting to buck that trend though, with their ambitious release of Pine as it negotiates a release upon the Nintendo Switch.

The roots of Pine lie within a kickstarter campaign that began a couple of years ago, with a project that boasted an amalgamation of many of the mechanics often associated with the triple-A role-players that dominate today’s markets. When you first start up the game, it’s quite apparent that the developers had quite big ideas for the game and that a lot of blood, sweat and tears have been poured into the game with its impressive visuals, investigative world, deep mechanics and a wide range of systems. In fact, when you delve deeper into its world, it doesn’t take long to begin making comparisons to The Legend of Zelda: Breath of the Wild when it comes to the sheer scope that this indie title aspires to.

You play the role of a young man named Hue, who dwells within the the world of Albamare. What sets this world apart from other similar settings, is that the human race is no longer the dominant species and that the land is comprised of many tribes or factions; each of them made up of bands of animals, such as the foxes, turkeys or lizard-like humanoids. Each of these tribes vie for land and resources with which to expand their power and influences and being part of the lesser species, you embark on a journey in order to create alliances, help various factions and vanquish foes in order to elevate the existence of your own kind. 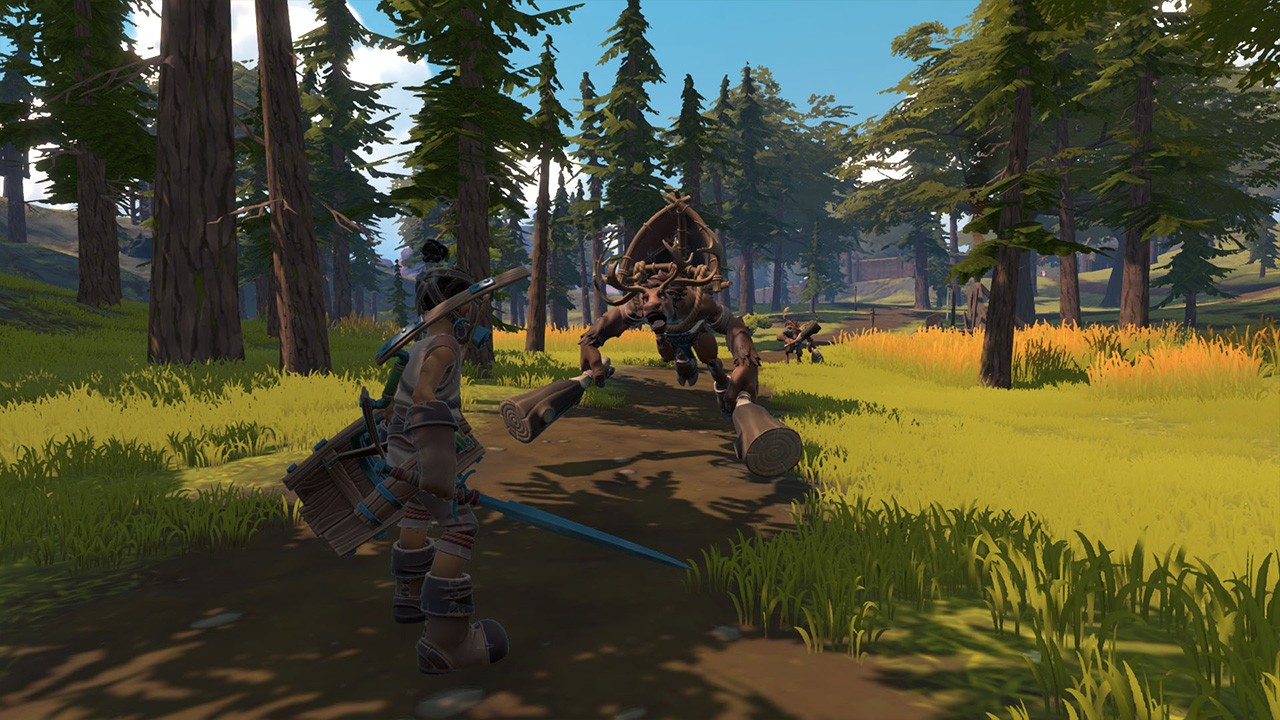 The game’s beginnings sets you upon a series of tutorials that follows a linear path to introduce you to some of its key mechanics, such as combat, crafting and negotiating. Once completed, you are then set free within the open-world plains of the land to set up alliances, discover new races and influence the world around you. However, the general flow of the story does present a more linear path, rather than an expansive freedom, through the quests that each of the factions set out for you. With repeated successes whilst helping certain clans, their influence grows and their settlements develop, allowing you to expand on your own existence through development of items, clothing, food and weaponry to help your own survival.

The whole system that is in place here works quite well in the grand scheme of things. For instance, helping one particular tribe can build influence for both parties. However, for what is built up, means that another species falls behind and soon become rivals or enemies to your cause. In fact, when you start out within the world, everyone is your enemy and through interactions and quests, you begin to develop relationships with a number of animal breeds. One thing that the game captures quite effectively, is the feeling of working within a living, breathing world as each settlement and their respectable NPC’s all have a role within their own development. For instance, some villagers go out to the fields in order to collect vital resources, whilst traders will travel to allied towns and villagers to acquire much-needed items and warriors guard their own establishments and attack rivals groups and settlements.

Crafting, combat, exploration and scouring for food are the other components that make up the core gameplay within Pine. However, none of them are as well implemented as the relationship mechanic, although this too does have its faults. Despite being essential parts of the gameplay, the crafting feels a little tacked on, exploration is largely empty with a world that feels too large for its inhabitants, combat is clunky and unsatisfying and the constant need to find food in order to keep your stamina up becomes a bit of a grind. Although some of these elements can be upgraded, particularly within the combat, none of them ever feel rewarding or provide enough variety to make the combat feel more distinct. 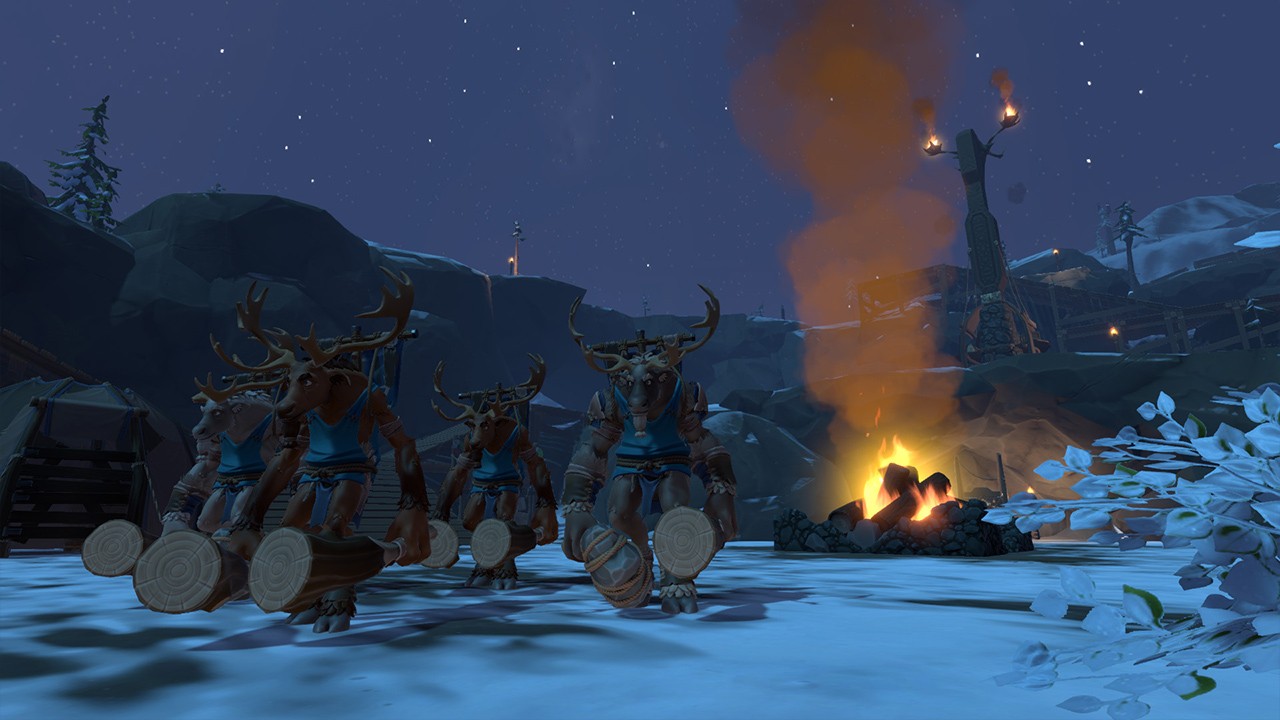 It all soon begins to feel a bit repetitive as you rinse and repeat the same actions throughout the game. This is particularly noticeable when it comes to the quests that each of the factions give to you in order to gain their trust. For the most part, each of the quests given to you by each faction remain the same, forcing you to partake within the same tasks over and over again. This is also true when it comes to building up trade, as non-friendly towns will require you to donate certain resources before they let you trade with them. However, they require so much of a resource, that it simply becomes another grind. These elements do pad the game out somewhat, but after the initial awe of the first few hours of gameplay, the rest of your journey becomes tiresome as you go over the same ground time and time again.

Unfortunately, the game also possesses a number of technical issues that can hamper the gameplay somewhat. What you get is not necessarily what is advertised with Nintendo’s eShop, as textures are significantly reduced, pop-ups occur on a regular basis and even some in-world objects disappear when you approach them, causing you to reach a dead end that prevents progress unless you restart the game. The game has been patched since its release to overcome some of its issues, but there are still very many that remain; including an initial loading screen that can take upwards of five minutes to get through. With luck though, continued support will see further patches that should eventually help to create a much more stable and satisfying game.

Overall, Pine is a very ambitious game that does deliver a lot of what it promised. It is a grand adventure and one that sits better in a double-A capacity rather than a triple-A adventure. For the most part, it is beautiful game to look at and a lot of fun to play, but its elements can become tiresome after a while and produce a game that eventually loses steam; making this a game more suitable to a casual capacity that can be revisited over time. A number of technical issues can hamper progress and bring some frustrations, but in general, the game does run at an acceptable pace and restarting usually solves the problem. However, as an indie game, this is a standout title that displays a lot of love within its make-up and is, within its framework, a good game; just one that is hampered by a release before it was ready and a number of bugs, leaving me no option to score it as it stands now and not on what its potential could be. It just feels as if the developers were maybe a little over-ambitious and within Pine, embarked on a journey that was a little too far to fulfil, but I’m sure in time, patching will produce the game it aspires to be.

Pine is an ambitious title that could herald great things, but in its current state, falls far too short.