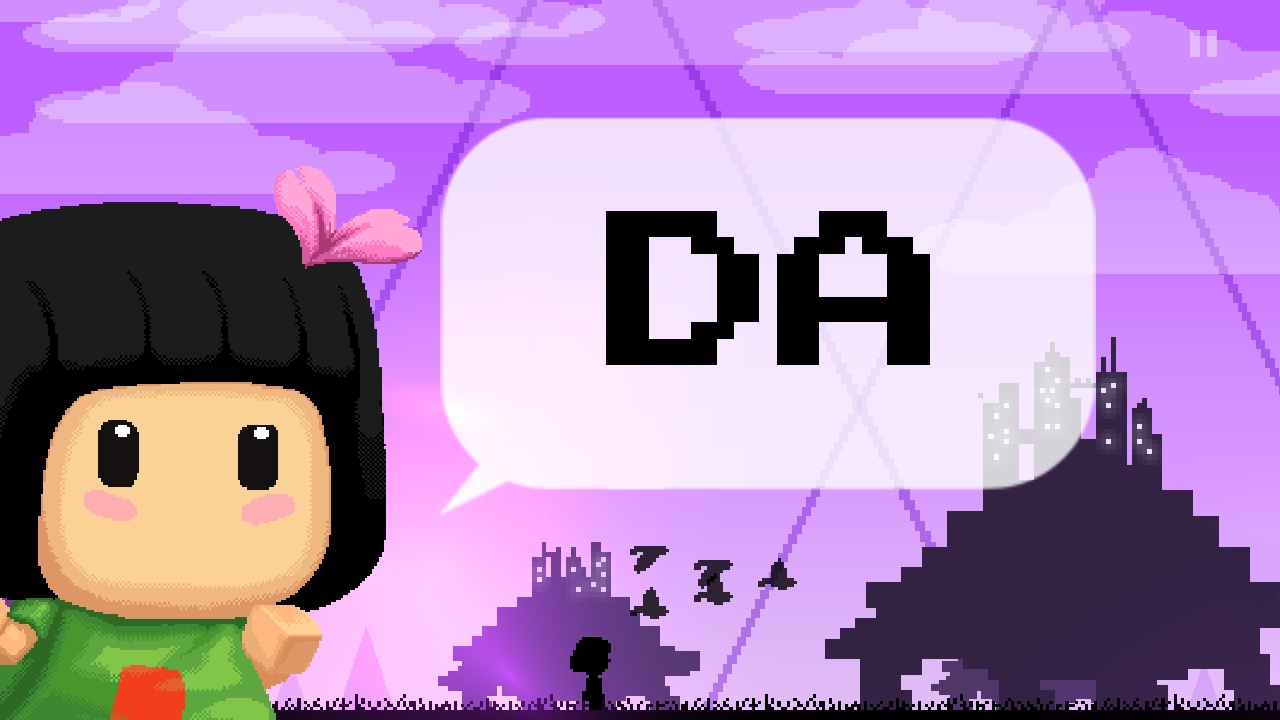 Japanese study games have been a massive market for years now. People in the West simply adore and worship Japanese culture, especially the language, and have always been looking for quick and fun ways to pick up different parts of communication therein. From fighting slime monsters to popping balloons, I’ve tried a bunch over the years, and they’ve always come in different flavors and ranges of success. Now, finally, Switch owners can start in on their own journey to pick up a whole slew of 日本語. Or, at least, that’s what they’re hoping they can do.

Hiragana Pixel Party is a simple and cute runner style game that’s meant to help introduce players to the wild and wacky world of hiragana, the primary written language in Japanese. In this game, players control a neverending runner, who has to jump over different characters in Japanese as they are laid out in a short burst of rhythm. Hit the keys in the correct order to move on and succeed. As you move further on, you encounter the entirety of the primary hiragana set, and start to spell words out along the way. 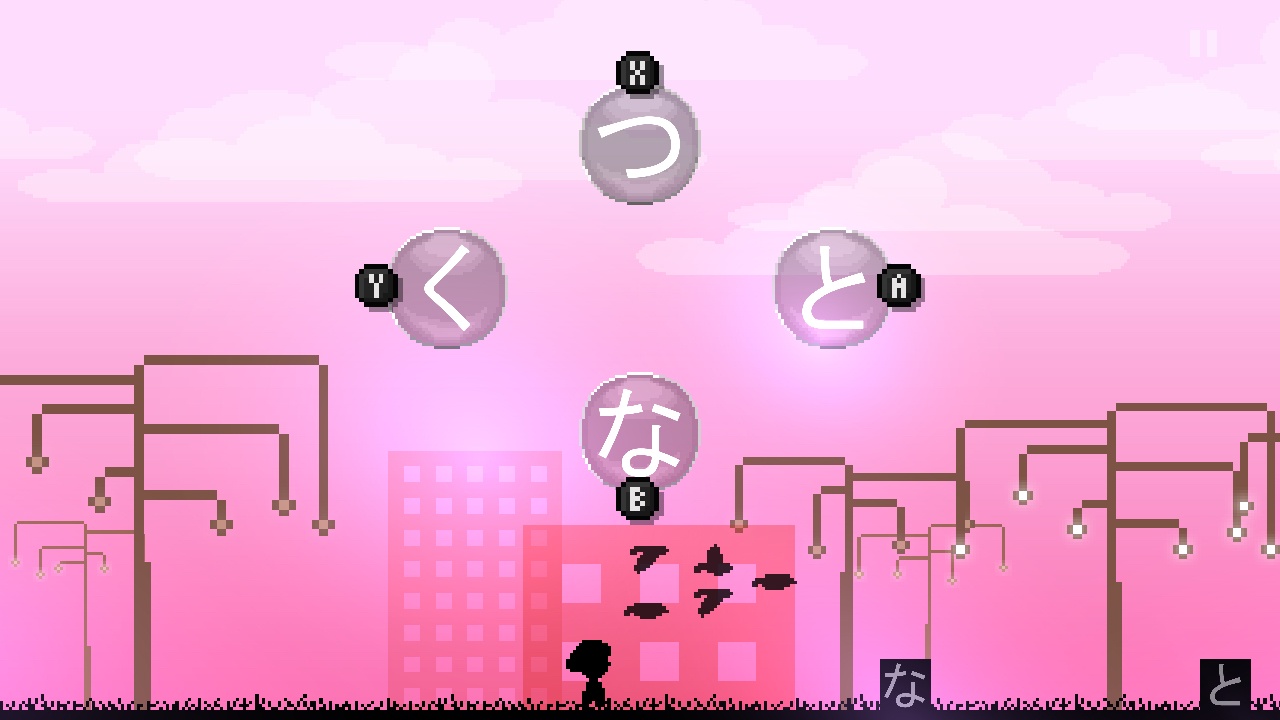 As a rhythm game, Hiragana Pixel Party is actually pretty damn fun. It’s got a poppy, chip-tune soundtrack that really helps drive along the speed of the game, and it matches well with the pixel backdrop. I was actually pretty surprised by how complex the background designs became, and I wish I knew more about the giant, monolithic robot beasts that seem to populate every world. Visually, the game is stunning, and I say that as one of the strongest points of the game’s appeal overall.

The game aspect is also pretty good, because it does force variety and muscle memory to keep constantly switching things up. By only allowing for four characters at a time but constantly remapping them every time you get to the next sequence, players are forced to keep their ears and eyes open to maintain a consistent flow. After all, when you miss a character, you take damage, lose a bird, and then will get game over if you hit too many. This is something where people who already know any form of Japanese will really flourish: having the characters innately known allows for faster response and better results overall. In a very controversial opinion, I would say this game is best for players who already know Japanese to some degree so that they can enjoy it as a rhythm game.

My criticism of Hiragana Pixel Party is mostly leveled at the educational attempt, and I don’t think that it works well as a learning tool. This sort of magic works best with a keyboard or at least a static setup: if players were able to type in their answers, there would be more association with the proper location of characters. Now, there isn’t a keyboard for the Nintendo Switch (yet) so, naturally, this is impossible. However, constantly moving the characters while repeating different sound patterns doesn’t really breed recognizability in ways that I think are important to use of Japanese outside this game. I think that it creates good recognition purely in a reflexive, knee-jerk sort of way that allows you to say “Ah! That’s ka!” but doesn’t put you any further than that moment. There are videos all over YouTube of how to learn to read Hangul in under ten minutes, and they work great: the problem is, once you learn it, you have no idea what you’re saying or reading. That’s the problem with Hiragana Pixel Party: you walk out with a bunch of new Japanese characters, but not necessarily a good way to use them. The result is little more than a party trick that quickly fades without something to hook it to. 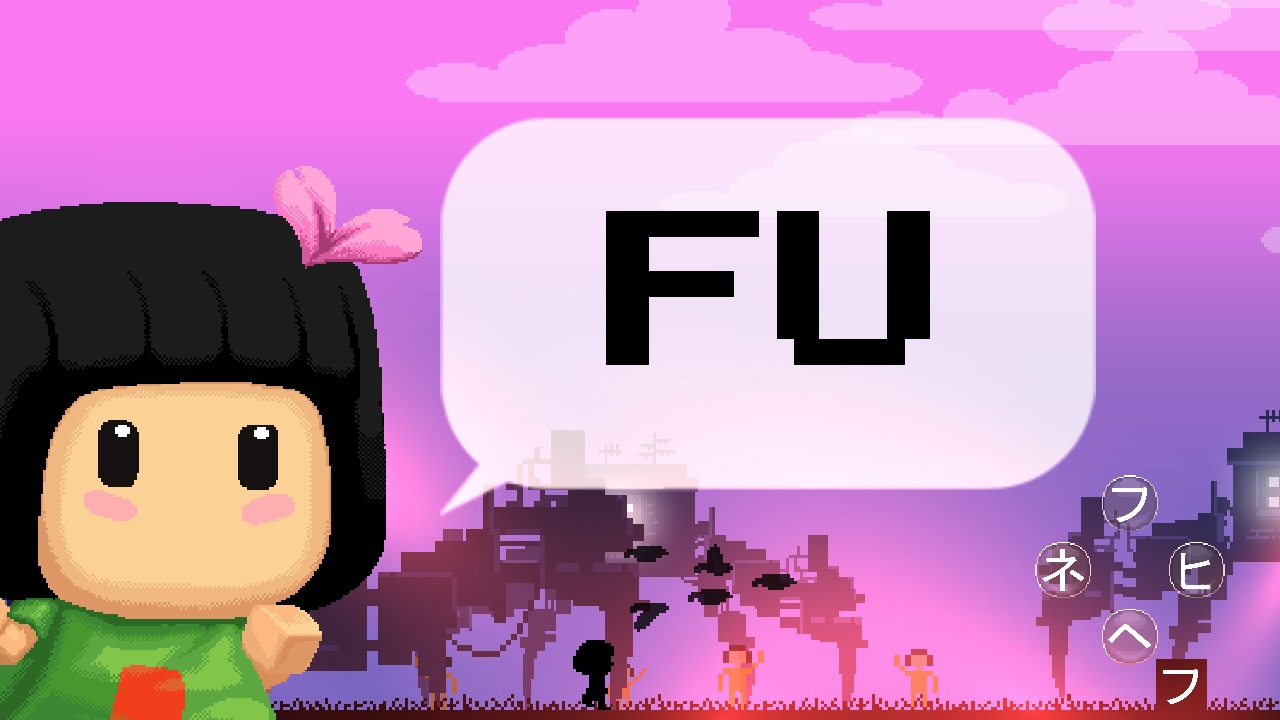 Though I do love that Springloaded has baked in a Katakana Pixel Party at no extra cost, and I HIGHLY recommend playing through to reach the Katakana. Not only are there new musical tracks and more interesting focus, but katakana is usable almost immediately, since Japan often writes Western words in katakana, or at least words that are being shouted at you. Looking for a good trick to impress your friends and generally make you feel more comfortable when you visit Japan? Learn katakana, it’s the easiest and best way to find stuff on menus, discover storefronts and generally pick up on the world around you better. It was my most important tool for many years and, even now, it’s something that I find helps when you visit special markets in Cambridge and other parts of Boston.

If you’re serious about studying Japanese, Hiragana Pixel Party is a fun and neat sidequest, but should by NO MEANS be your primary study tool. Have it on hand with a textbook or someone to practice actual literacy with, and the two could go hand in hand nicely. On the other hand, if you’ve done a couple semesters of Japanese in school and just want to have fun, Hiragana Pixel Party is a well done and surprisingly difficult rhythm runner that appeals to me on a musical sense and also as a fun time in general. Pick it up, relax your shoulders, and がんばって みんあ！