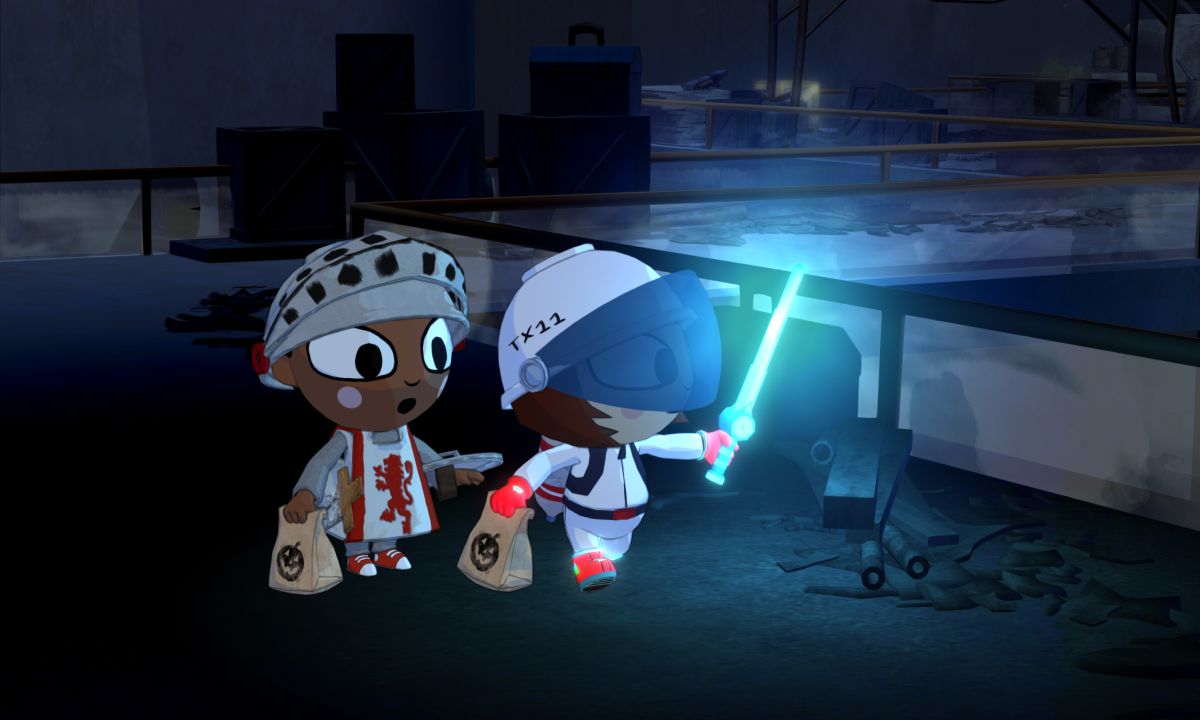 Halloween is one of my all-time favourite holidays. You can dress up as whatever you want, everyone’s in a creative mood, and free candy. What’s not to love about it? Well, everything would be fine if you weren’t chasing after your missing sister.

Welcome to Costume Quest. It’s a game about adventure, imagination, heroes, and lots of candy. Join our hero, Reynold, as he basks about the neighbourhood, hunting down the sweetest of treats along with a ragtag crew of neighbourhood kids and eventually your sister, Wren. Everything seems to be going well until your sister is mistaken as a giant piece of candy and the monsters run off with her.

The game begins with Reynold and Wren starting their annual festivity of trick or treating around the neighbourhood. Your parents entrust you to look after your little sister, and then you are off. In the midst of you strolling through the neighbourhood, a monster comes by and takes your sister, Wren! Brushing aside your initial shock, you take it upon yourself to buckle up and go get her back.

The first thing about Costume Quest that caught my eye is the art style. It is a fully rendered 3D game, but it has the look of a kid’s cartoon. I love the atmosphere the developers established right out of the gate with the foggy, yet mysterious Halloween evening that Reynold has jumped into. From the way the trees are swaying in the wind, the moonlight, the arrangement of all of the houses for trick or treating, everything about Costume Quest embodies the spirit of Halloween.

As the brave Reynold, you’re going to need help and some other things to rescue your sister. The game is divided into two different types of gameplay. The first type of gameplay is the overworld view, or what I will refer to as a non-combat view. In this passive environment, Reynold can explore the entire neighbourhood or area, swinging his candy bucket against trash cans, pumpkins, mailboxes and anything that prompts you for an interaction to gain candy. There’s a witch named Dorsilla that has dispatched her monster minions to gather all the candy they can for other nefarious purposes. Candy is a vital resource in the game and I’ll touch on that later in this review. 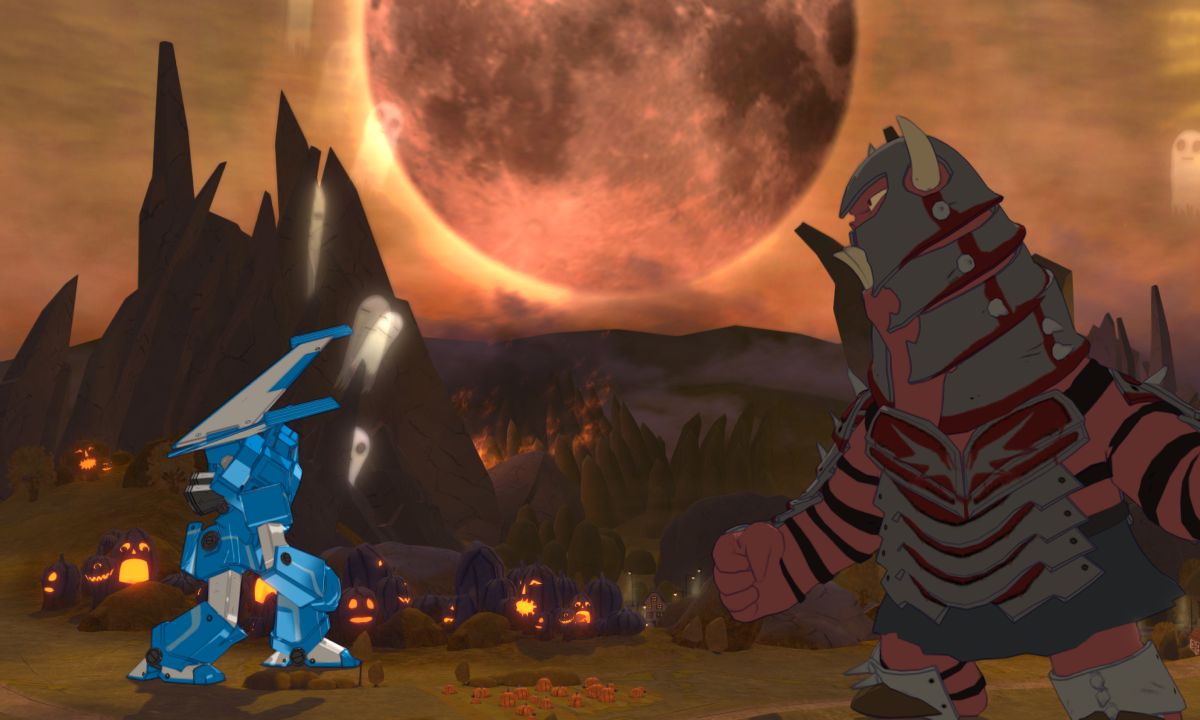 During the non-combat view, Reynold can take on side quests, as well as interact with other trick or treaters and mini-games he may run into. An example of a side quest was finding six kids in the neighbourhood playing hide and seek. The reward was either part of a costume, a costume blueprint, or lots of candy. Costumes are also another important part of the game, which will be explained later in this review.

In addition to the side quests, Reynold can talk to random adults that may be setting up contests or giving out candy while you trick or treat. An example of one of the contests was bobbing for apples, where you were on a timer and had to meet the contest goal of X number of apples. Sometimes, knocking on the doors of each house can result in a random monster fight, but if you’re lucky enough, it will be a reward of a good chunk of candy.

The other part of the gameplay is combat. Combat is engaged when you either run into a monster directly or if you knock on a door collecting candy and they answer the door with some quip of “it’s your last treat!” to begin combat. Combat is turn-based with the added function of quick-time events. In this reference, you are prompted to pick the correct button and if you don’t press it in time, you will miss your attack all together or cause the enemy to do full damage to you. I did experiment with several variations of combat, but even when I did successfully press the right button, I wasn’t able to deflect the damage. I believe the game plays on a random number generator system where there is a percentage of successful hits vs. the times you will get hit by the enemy.

Candy is an important factor in costume quest. Not only is it something you pick up along each battle and side quest you complete, it is a form of currency. As you are still searching for clues to find your sister, Reynold is collecting candy to buy new stamps or other costume accessories. Stamps are sold by a girl with a stand named Sadie. She’ll pop up in new areas and sell off new stamps that you can buy with the candy. The stamps are important because they unlock bonus combat or support abilities. For example, a wolf’s fang stamp equipped to Reynold would increase critical strike chance in combat as a passive ability. I check in with Sadie regularly because she updates her stock constantly. The better the stamp, the more candy it will cost, so get used to knocking on all the doors you can find.

Costumes play another important role in costume quest because they activate different abilities in the main combat events as well as their utility when it comes to the non-combat view. For combat, each costume you collect and build has their own special abilities. For example, Reynold starts with a robot suit, which can do a rocket punch and missile barrage in combat. In the non-combat view, it allows Reynold to skate by faster to different sections of the map. 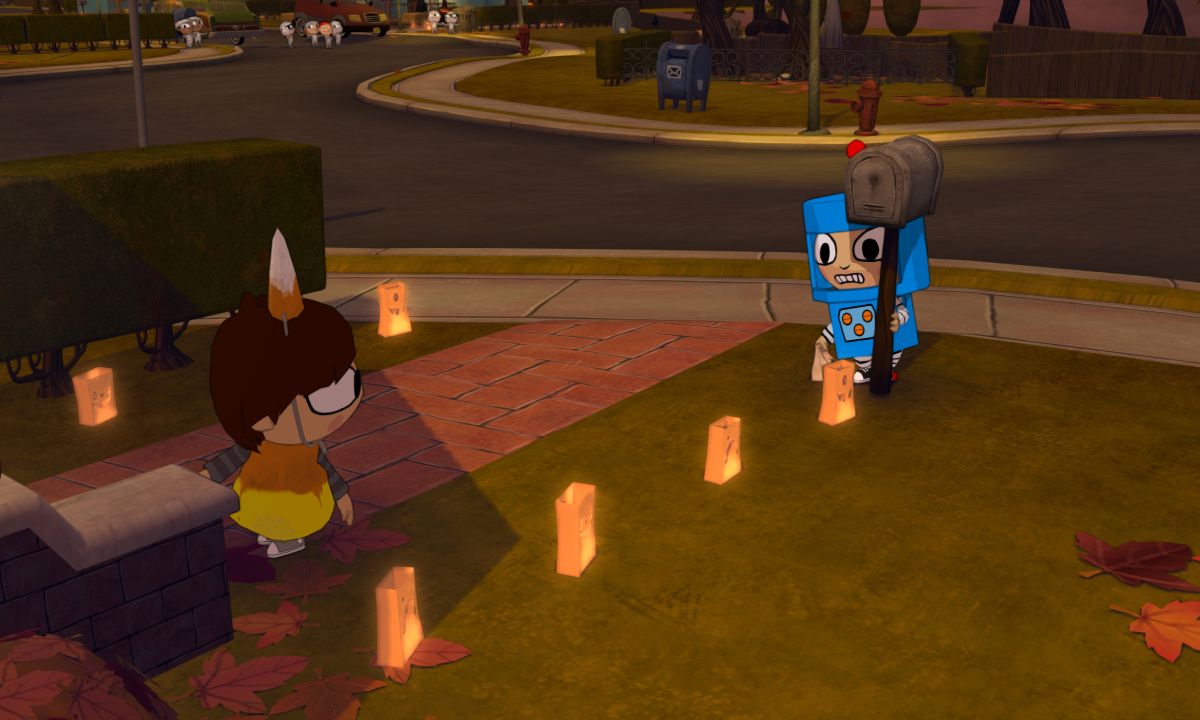 As you progress through the game, Reynold will gain friends to join him on his quest to ultimately save his sister and collect candy. Your party will be able to equip the other costumes as well as switching to each character on the fly. The first member you get is Everett, which is wearing a knight’s suit of armour. His abilities are melee-based in combat and the non-combat sections, he’s able to protect your team from overhead objects. The third member you get eventually is Lucy. She’s able to equip any extra costume you get. I kept her as the lady liberty costume because of her support healing abilities in combat. Although each member fills out the costumes accordingly, you do have the freedom to switch them out directly to make the best use of them for each situation.

The great things about Costume Quest come in the details the developers put into the game. The combat was okay, but it was collecting costumes and figuring out what each costume did that kept my attention the most. Collecting candy from each neighbour was always fun because I had an equal chance of encountering a monster fight or being rewarded some sweet candy. The last thing I absolutely adored about Costume Quest was how fun it was. This is a game that perfectly represents what Halloween is to a kid. It’s a spooky adventure, encountering monsters and collecting all the candy.

The only thing I could find that set back Costume Quest from my grading perfection was the balance of combat. As mentioned earlier, during the quick time events, despite how often I was able to time the button pressing of each attack or defend, it didn’t always consistently reflect the damage dealt in combat. There was a time where I successfully hit the correct buttons five times in a row, but I still took full damage from the enemy. Combat was fine, it was simple enough where anyone could pick it up immediately. There wasn’t a weakness system, but there were varying stats to each costume. Each costume played differently enough that it didn’t feel like the same character was using the same attacks with the same amount of damage. My only regret is I didn’t pay attention to this game a lot sooner.

For a fun weekend or evening, Costume Quest is something to take up your time. It’s a simple premise, the controls are easy to pick up on, and it’s just a lot of fun to play. Collecting candy and finding new costumes was a huge selling point for me, because it kept my interest in seeing what new costumes I could get to use against new enemies. Yes, I wish the combat was more layered with different options to fight besides hitting a button, but this doesn’t hold back Costume Quest as a game. This is a great entry-level game for anyone that loves Halloween or just wants a fun game for an afternoon. The game isn’t long, but for what Double Fine put together, it gives you enough of a story to leave you wanting more, but doesn’t spoil your appetite with too much candy.

For a fun weekend or evening, Costume Quest is something to take up your time. It’s a simple premise, the controls are easy to pick up on, and it’s just a lot of fun to play.