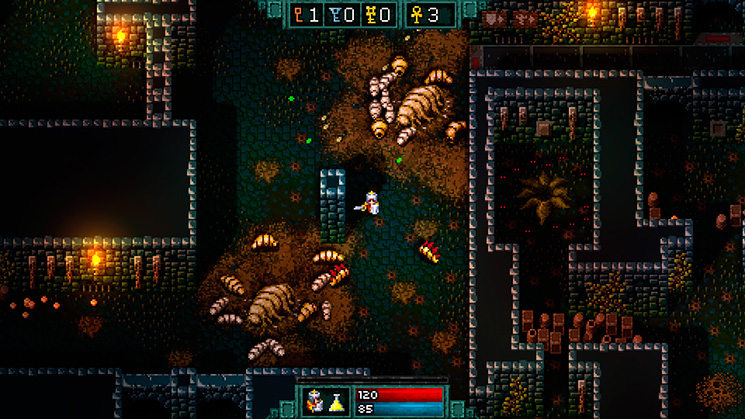 Ever had a game that was designed for multiple players but tried to pretend it wasn’t? A lot of modern FPS games build their entire framework around having a ton of people blast each other on sprawling maps, but then remember there are times when you don’t wanna put up with other people, and so a single player campaign is hastily dropped in, usually resulting in 2 hours of bad plot and spotty AI. It’s a sign of the times, and it makes a lot of gamers sad to have to fake interest in playing with other people. But, every so often, there’s a game that makes itself fully accessible for the single player, but wants to show you, with every passing second, that you’re better off with someone else there, because you’re gonna die. Gauntlet did it best and first, but that doesn’t mean Hammerwatch doesn’t present a pretty compelling argument.

Hammerwatch does very little to try and soften the blow of what it is and why it’s here for players. Basically, there’s a castle, called Castle Hammerwatch, and it’s full of monsters. Just full, like, unbelievably so. You gotta go in there and clean them out. How? Easy, top down hack-n-slash adventure. Get in there and beat the living hell out of anything that moves. The game is procedurally generated, so there’s enough mayhem and chaos on each floor that you’ll find something new every time you have to start from the beginning. Oh, and you’re going to do that a lot, because there are so many goddamn enemies in every nook and cranny that you encounter.

The game is going to lull you into a false sense of security by offering easy, medium and hard modes, and easy clearly says “enemies have less health.” So you’ll pick that one and, at first, you marvel at how fast enemies go down. Literally swing the sword or stave and knock out three bats at once. “How simple!” you say to yourself, and you immediately get a bit smug. You whack away, clearing out 20, 30 monsters at a time, not even caring where they come from because, well, you’re set. And if you get hit, big deal, there are apples everywhere. There’s not even a button to press to consume the apple, just walk over it and boom, recharge health. You also can dash about, and that’s connected to a second meter, which recharges over time. There’s also gems that can recharge it, but who needs those? You’re not concerned. Grab a key, find a door, get some coins, your life in Hammerwatch couldn’t be easier. And since Crackshell did us all a favor and rebalanced the game for the Switch (seriously, thank you so much), a single player can almost dance through that first floor. 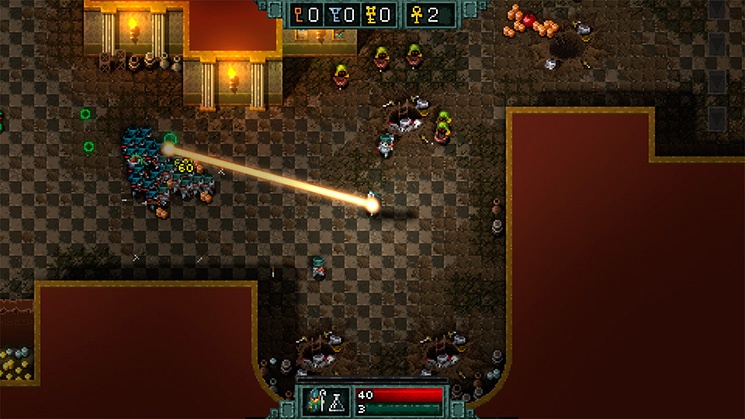 But then you ascend to the next stage of Hammerwatch, and suddenly things are different. It occurs to you that you’ve been hacking away at monsters nonstop, but you haven’t gained any experience. That’s because there’s no leveling up in Hammerwatch. Sure, you can buy different skills from the stores that are randomly scattered throughout the dungeons, but those aren’t guarantees on what will and won’t be game changers for you. Now the enemies are starting to shoot stuff at you, and it doesn’t hurt a lot but it does hurt. Apples start to become a little more important because you’re eating two, three at a time. You’re dashing so much that the gems become friendly beacons of escape, but you can’t always get to them easily, so now you’re hoofing it while the waves of enemies behind you get bigger and bigger. See, the Hammerwatch monsters don’t like to give up, and they will chase you. Forever. They have nothing better to do and, as long as there’s a road between you and them, they’ll follow. They don’t care that arrows from wall traps hurt them too. They don’t care about the spikes on the floor. If you’re on the same level s them, they’re coming for you.

And in all the pixel-y darkness, that’s what makes Hammerwatch truly something great and terrifying in the same breath, is that it is RELENTLESS. You never get a moment to breathe. Not one. So folks coming into the game to try and solo run on either the original or the DLC expansion (Temple of the Sun, included in the base price, thanks guys!), you’re going to be cursing aloud about the nonstop madness and the supreme lack of help to absolutely no one. Once you get a friend or two on board, however, Hammerwatch really shines, becoming a frantic, hectic, hilarious slash fest full of screaming at each other what to do next and who needs to do what. Everyone’s gonna want to be the sorcerer, because that’s the new class added just for the Switch’s release, and it’s arguably a ton of fun with flashy spells (as flashy as you can get in pixels) and better health than the wizard ever had. But if you don’t have one person suck it up and become a priest, you’re all going to die once you reach the first boss battle. Oh, did I not mention there are massive bosses who like to murder your face? There are. And they are fearsome even on easy. 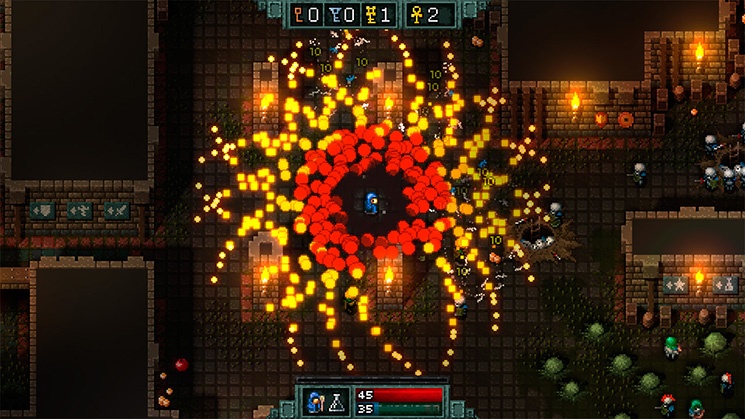 When the smoke and ash clears and you’ve realized you’re totally dead, it’s time to pick yourself up and try again. Maybe challenge yourself to a harder difficulty, because you’re that kind of masochist. Maybe give survival mode a shot, because, if there’s one thing that makes Hammerwatch better, it’s removing the prospect of actually finding relief at the end of the tunnel. Or, just maybe, try a different set of classes and give it another shot, because you and Mark still have another ten minutes until someone needs to go pick up the pizza and dammit maybe a ranger is the solution. It’s got the addictive qualities of Gauntlet without the annoying voiceovers, which, don’t listen to the retro defenders, those voices got on my nerves after a while. There’s so much here in the game right out the gate that it’s like a hack n slash buffet. If you love this flavor, you’re going to LOVE the rest of the meal. And, through dark magic that I can’t imagine, the game is the same price on Steam as it is on the Switch. That’s something special, because I don’t fault devs for charging more, but it’s such a great surprise when they don’t.

Crackshell has already put a reserved spot on the game’s main menu for online multiplayer in the near future, so fans of playing across borders (or at least not playing in the same house) can relax and be at ease: the future is bright for this smash hit from the last few years. If you have room on your Switch for one more title that’s absolutely stellar (and the install size is minimal, so you should), then grab Hammerwatch as soon as you’re ready for a total beatdown in the best way.