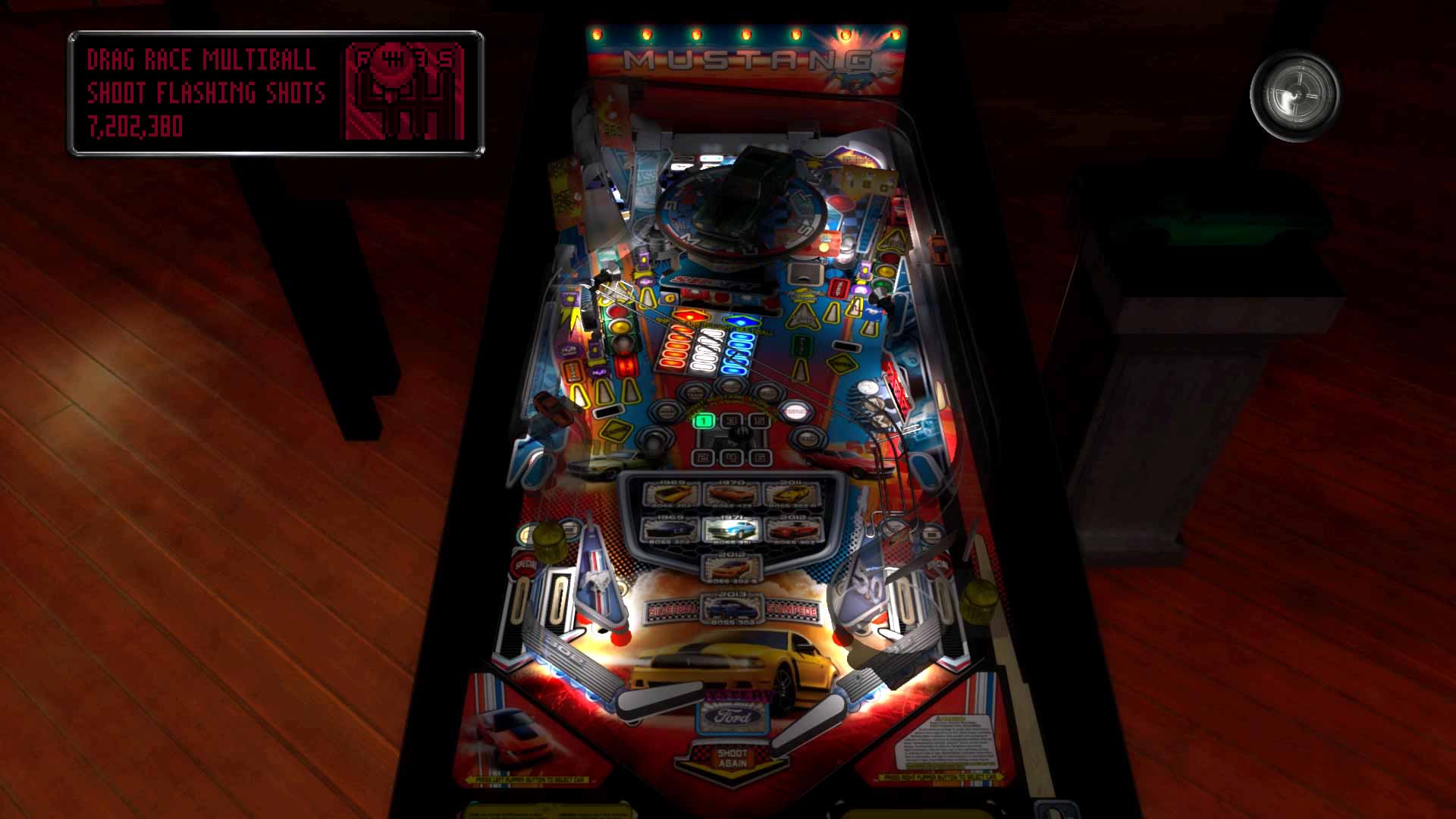 The second set of DLC tables for the Stern Pinball Arcade is a doozy, coming in at six tables for the same price as the first DLC set, which has only four. At first, this seems like a no brainer situation: four versus six, you’d want to get more. However, it’s important to note the tables in this second DLC set, because they are of a much broader age range than the first, and, as a result, varying quality. Let’s take a run, from bottom to top.

The Phantom of the Opera table comes in as both the oldest and the worst of the set, having originally premiered in 1990 when it was still bearing the branding of Data East. I realize that, in my other review, I stated the tables only went back to the mid-90s, but I am not a pinball wizard and cannot know the dates of every single table forever, especially when I haven’t played them yet. This table, based around the novel and not the musical, takes on an incredibly dark and foreboding tone throughout, and the play is equally as dismal. Boasting little more than a single imagine of the Phantom and Christine in a provocative post, the gameplay is set simply on racking up a score that’s based mostly on the bumpers at the top and, on occasion, activating the ramps on the side at the right times. Since this is a faithful recreation of an older table, it doesn’t have a lot of bells and whistles, and also does not have ball save for fast launches. The result is that players who are less familiar with pinball will find themselves out a ball almost immediately, since there is a lot of fast shooting from the top to bottom. There is a nostalgic thrill of hearing the digitally crackling voice of the phantom over the simulated speaker, but it’s not enough to keep unenthusiastic gamers involved. Definitely a fire and forget in the pack.

Mustang comes in at number five, a table based entirely around the muscle car that helped shape the 60s and still holds a strong place in the hearts of Southern folk to this very day. This table, which boasts a ton of gaming modes and has up to six balls on the table at once, is something that becomes incredibly chaotic in no time at all. Sure, the music is pretty driving, fluctuating between sock hop and rally race, and I love the fact that the table boasts the ability to activate eight different “game modes” that all revolve around driving. But over half the table is dedicated to a revolving Mustang model that obscures the vision of the top bumper set and creates a lot of reflection room for wild shots. As a result, you feel like you only get to use half the table most of the time, and, when the ball disappears up top, you have to be on tenterhooks, waiting for the ball to finally reappear because it may come rocketing your way. This table is gorgeous, no doubt, and having it in this collection makes it much easier to watch the action than on an actual machine, but that doesn’t diminish the fact that it can be a nightmare to try and play when you aren’t totally zen into the game. 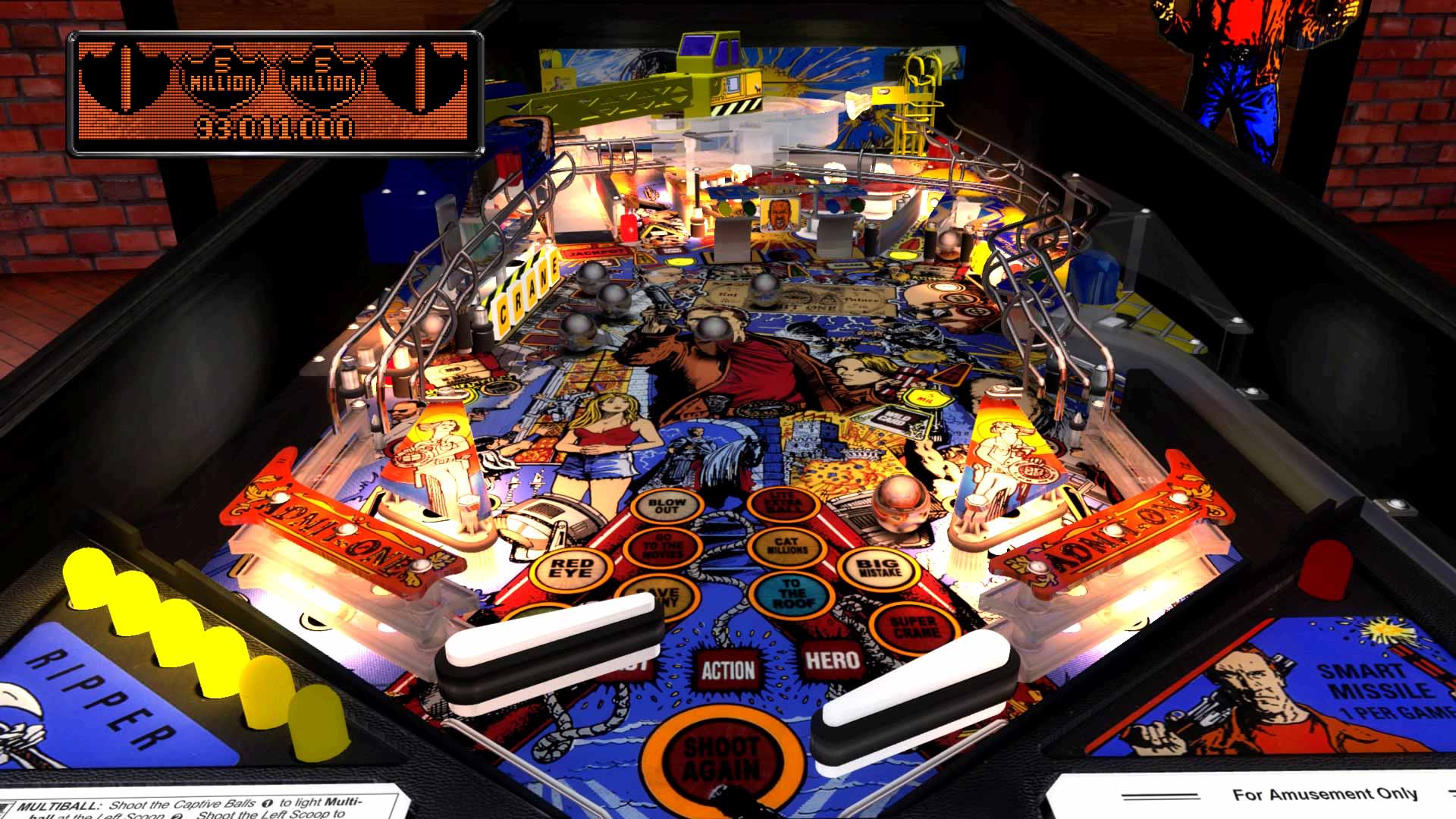 High Roller Casino deserves to be in this pack because it’s one of the earliest tables that Stern made once they revived back in 1999. As you might imagine, it’s entirely casino focused, with a working roulette wheel on both the main floor and also up on the display board, and you’ll end up activating both in the course of the action. Bonuses are activated by collecting additional casino tokens as you win different games, and knocking down flags results in craps being rolled and blackjack being tossed. This is a decent game, even if it has no ball protection (as I quickly found out). But there’s nothing particularly spectacular in it, and nothing that makes it stand out in a way that screams “I belong here.” I’d say the best part is watching your ball spin and fall into the roulette wheel on each launch, and hearing the audio of someone saying “I’ll take what I can get, just like with women.” This is like catching Vegas Vacation on television on a Sunday afternoon. It’s not the best Vacation movie, and you wouldn’t consciously seek it out in your free time, but it’s here, it’s fun enough, and it’s got gambling, so might as well sit a spell.

Coming in 3rd is Last Action Hero, a table from 1993 that’s based around the ridiculous, meta movie that Arnold Schwarzenegger starred in once upon a time. The table is best enjoyed in the physical form, as the launcher takes the form of a pistol grip and Arnold’s voice comes in loud and clear through the speakers, but it still translates well into a digital experience. The first launch is met with “explosions” that cause the table to rock and shake for the first few seconds, but don’t worry: this is the most generous case of ball saving I’ve ever encountered. Time after time, I thought I had lost the play when, suddenly, the game re-launched it out with an animation of Arnold shooting off his pistol, and resulting in me hitting three panels and not knowing what the hell is going on for the longest time. The ramps do have an unusually steep incline, from what I noticed, so it will take a very precise shot to make it up either side, but I suppose that comes into the skill factor of it all. There’s even a moving crane that will ferry your ball across the table to lock it in for anticipation of multiball, and that just looks damn cool (and, for the purists, is a big part of the movie). It was one of the easier of the older tables, and helps to emulate how someone could take something like a 90s action movie and do everything they could to capture it in the medium of pinball. And, frankly, I think they succeeded.

Harley Davidson is the second best table, and it’s really quite a piece of history as well. Since Stern acquired Sega’s tables right in 1999, this pinball machine is printed under both names, at two different times in the same year, and is technically Stern’s first foray back into the game, though by no means an original table of theirs. This pays homage to the glorious biker lifestyle, and the dirty and dusty aesthetic is something fun and delightful to be a part of. As part of the “hell on wheels” type of lifestyle, Harley Davidson also does not have ball save down the center, though the left chasm has a pretty frequent launcher save that’ll do a lot for players. This table is incredibly generous with points, with replay coming at a whopping 220 million and players rocketing into their first millions without even being aware of it. Most of the challenges and missions revolve around racing, but, unlike the Mustang table earlier, the model Harleys on the board are unobtrusive and serve as great centerpieces that move and rev, guiding players quickly towards multiball and bonuses almost instantly. This table also features one of the better minigames, where players need to guide their bike between cars and hit pedestrians on the digital board. It’s not the most ethical setup, but it’s still fun. This is also the first table where I hit a high score almost immediately, so players who aren’t the most proficient can take heart that this machine is generous, giving, and tons of fun, in stark contrast to the supposed riders of the 90s. 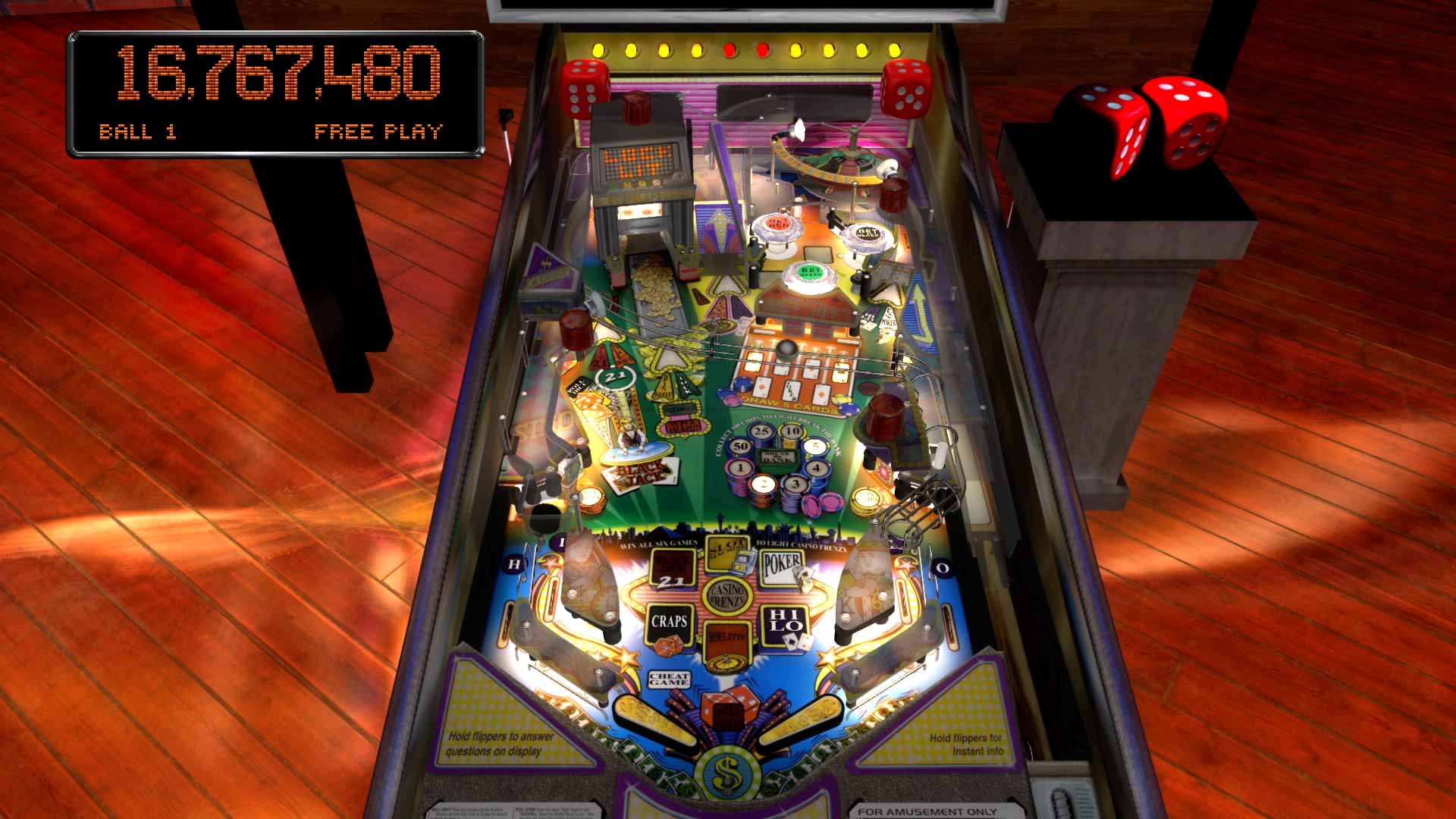 Lastly, and who can blame me, is Ghostbusters. Based on the original movie but being published in 2016 was a bold move by Stern, and even moreso when you realize the bumpers near the flippers almost blend into the table itself due to color coordination, but, somehow, it works. This table is FILLED with miniatures of the original movie, from the haunted library to the fire station where the Ghostbusters reside, and even a miniature Stay Puft Marshmallow Man who will come looming out of the distance when the time is right. There’s even a Slimer who swings out on a mechanical arm and must be beaten back into submission in order to move forward. There’s a tiny screen that projects some of the ghosts of the first movie onto it, letting you know which of the ghouls you’re currently hunting. And, best of all, Ray Parker Jr. is there over the speaker system, blaring out the tune we all know and love so well. This table is the best of both worlds: it has the nostalgia of a classic comedy and a forgotten game medium combined with everything that Stern learned over the years. This is clearly the crown jewel of the DLC collection, and probably the one that they wanted to put at the forefront.

In fact, looking at the two DLC packs, Stern obviously wanted to strike a balance between quality and quantity. The first has only four tables, but there’s only one sour note among them and that’s not even remotely as bland as Phantom of the Opera. Phantom and Casino are both forgettable while Mustang is a pain in the ass, but the others are good while Ghostbusters is fantastic. Overall, the balance is there, but I’d still probably lean towards the first table set myself. In any case, these are all machines that go for thousands out in the real world, so a few bucks to own faithful digital reproductions is still a bargain in any case.