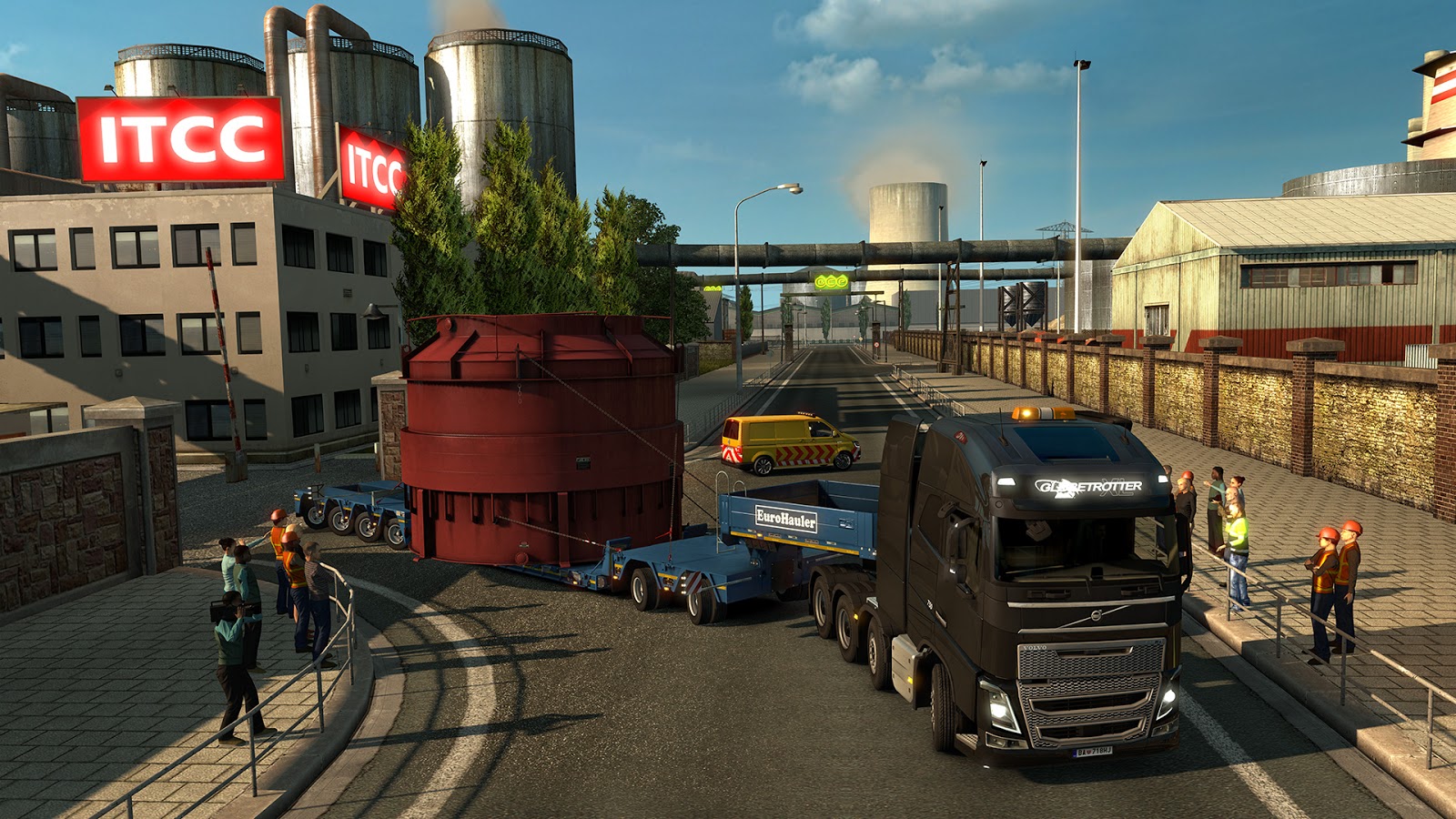 With previous DLC packs and map expansions, the core of the game has not been touched. You drive your truck to its destination, deliver the cargo, and collect your payment, but do it on different roads or with a new look for your truck. Only the Heavy Cargo Pack has added different deliveries to the game. However, aside from the double articulated trailers, these have not added a huge new challenge to the skill of driving in the game. This has been a successful approach as fans of the game keep coming back for more of the same.

This DLC changes all that though. The special transport cargoes are very different to anything already in the game. Extra wide and super heavy loads are now available for haulage in the shape of heat exchangers, industrial condensers, excavator buckets, huge tyres, and more. In total, eleven new cargoes and four new trailer types are in the game with each delivery going beyond regulations for height, width, length, or all three.

For such extraordinary cargoes, we see some new additions to the game. Each special transport is guided by a convoy with a special car leading the truck and another bringing up the rear. They serve several functions, showing you the way but perhaps more importantly warning oncoming traffic about the abnormal load coming their way. The lead convoy car will slide towards the centre of the road when a vehicle is approaching from the other direction to make the AI driver move over. When on a motorway, the rear convoy car ensures that any vehicles brave enough to overtake you also give a wide berth. 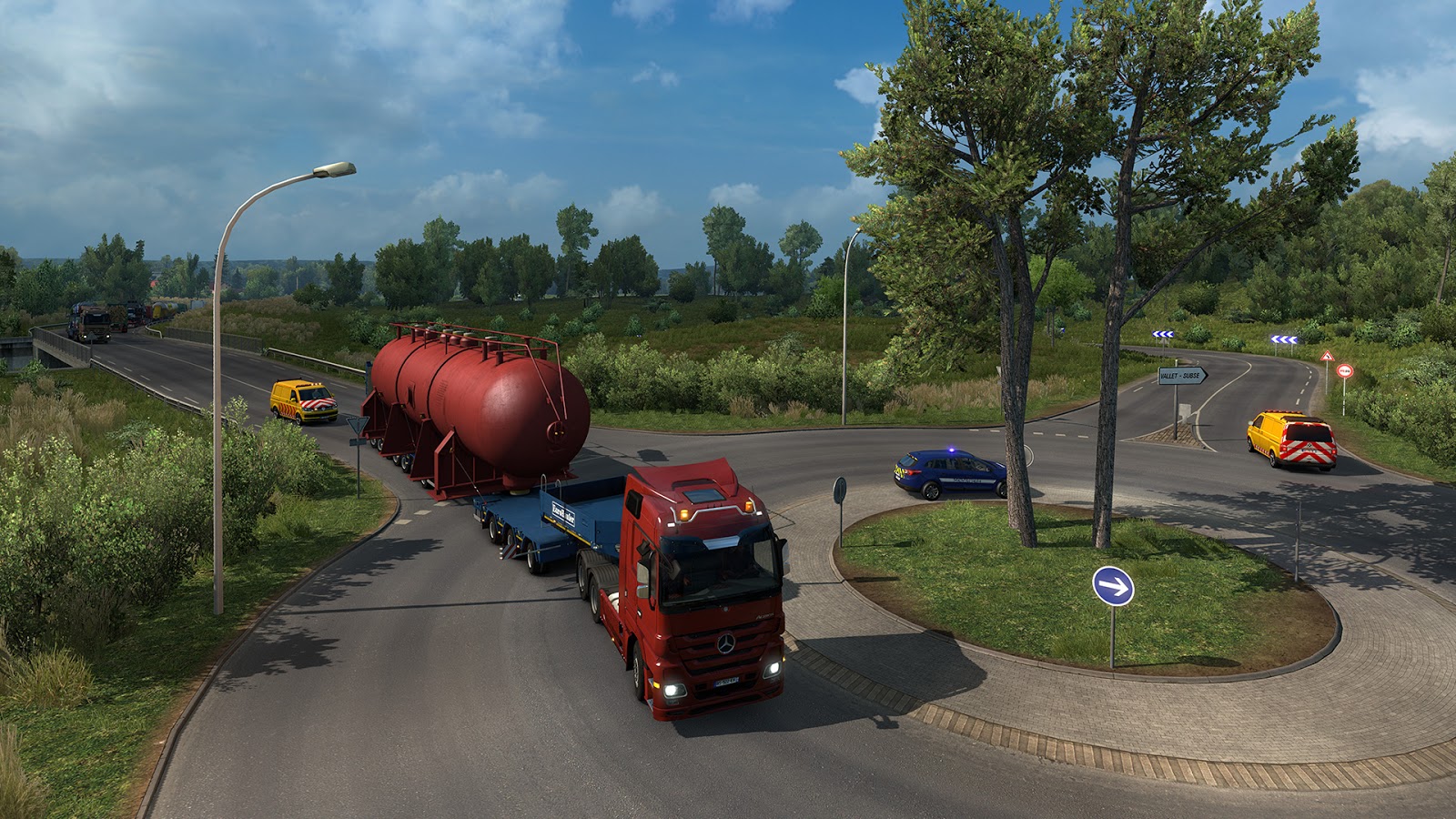 The convoy cars also ensure you stay within the speed limit and stick to the designated lane. Failure to do so could well result in you not being allowed to complete the job. This is just one example of how this DLC makes the game more challenging. There are more regulations to follow and you are less likely to get away with a small fine and a minor XP deduction if something goes awry. Running red lights is thankfully not an issue though as you will see the police and other official highway vehicles lining intersections and junctions to stop other traffic and wave you through.

Manoeuvring the trailers also provides a new level of challenge. While trailing the convoy car on the motorway is straightforward, exiting a junction on a narrow ramp through a 270-degree turn is not. Coping with city traffic when you first set out or approach your destination is also quite tricky as you have to watch out for other vehicles, barriers, walls, and road signs as you make tight turnings. It is challenging but also fun. There is certainly a greater sense of achievement when hauling a patrol boat across land than when carrying ten tons of gummy bears!

One thing SCS thankfully made easier though is the parking. You do not get asked to reverse park, at least not in the special deliveries I have made so far. You simply enter the drop off area and proceed to a fairly straightforward parking space with no tight turning or backwards manoeuvring required. If using your own truck, you also get a full tank of fuel and your fatigue bar reset to fully rested before beginning. This is to ensure that you can complete the job in one shift as no rest stops or refuelling is allowed (and would probably be impossible with such a large trailer in tow anyway).

There are at present some minor limits to the DLC though. There are only 17 cities from which you can pick up these new cargoes, even fewer if you do not own all the map expansion packs. If you are new to the game, you will need to discover these cities first. The routes are also limited with only a small number of destinations available from each starting point. Furthermore, the recently released Italia DLC does not feature in the Special Transport DLC at present. However, SCS have promised that new routes and cities will be added in future updates. The small number of routes is also quite realistic. We see trucks hauling containers on the roads every day, but a giant silo turned on its side and being transported is a rare sight. 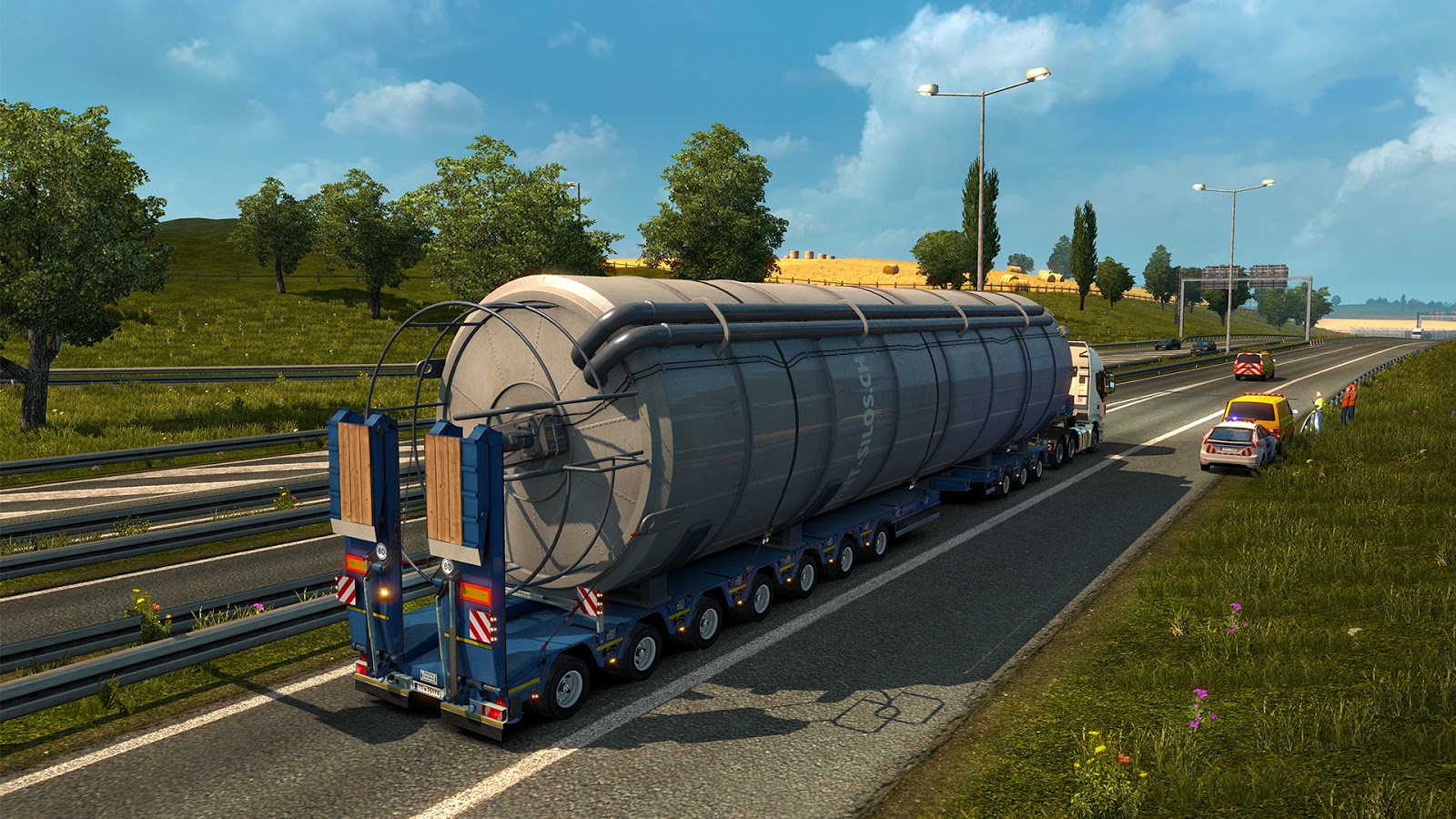 That is also reflected in the DLC as SCS Software’s famed attention to detail again comes to the fore. As well as the convoy guiding the way and police lining the route, the public come out to witness the special deliveries. They are there when you make the pick up and enter to road. They also line the streets and watch from overhead passes mid journey. Finally, curious bystanders will await your arrival at the drop off point with mobile phones in hand, some even using selfie sticks to get a shot of themselves with the truck passing by.

Much has been done to make the special deliveries feel, well, special. There is a cut scene before each job showing a crew or workers attaching the trailer and ensuring all cable and connections are secure. The media will also be out in force with camera crews, reporters, and photographers all after a local interest story. In short, taking on these jobs looks and feels very different to the regular cargoes long featured in the game.

Euro Truck Simulator has built its success around adding more content to the game without changing the gameplay experience. The Special Transport DLC breaks that trend by offering a new challenge which demands careful driving and greater attention to the roads and potential obstacles. As we have come to expect, SCS Software have delivered these additions with a high level of realism and detail. Although the number of new jobs and routes is not huge, more will be added in future updates and at just £4/$5, it offers great value for money. This is everything a DLC should be.