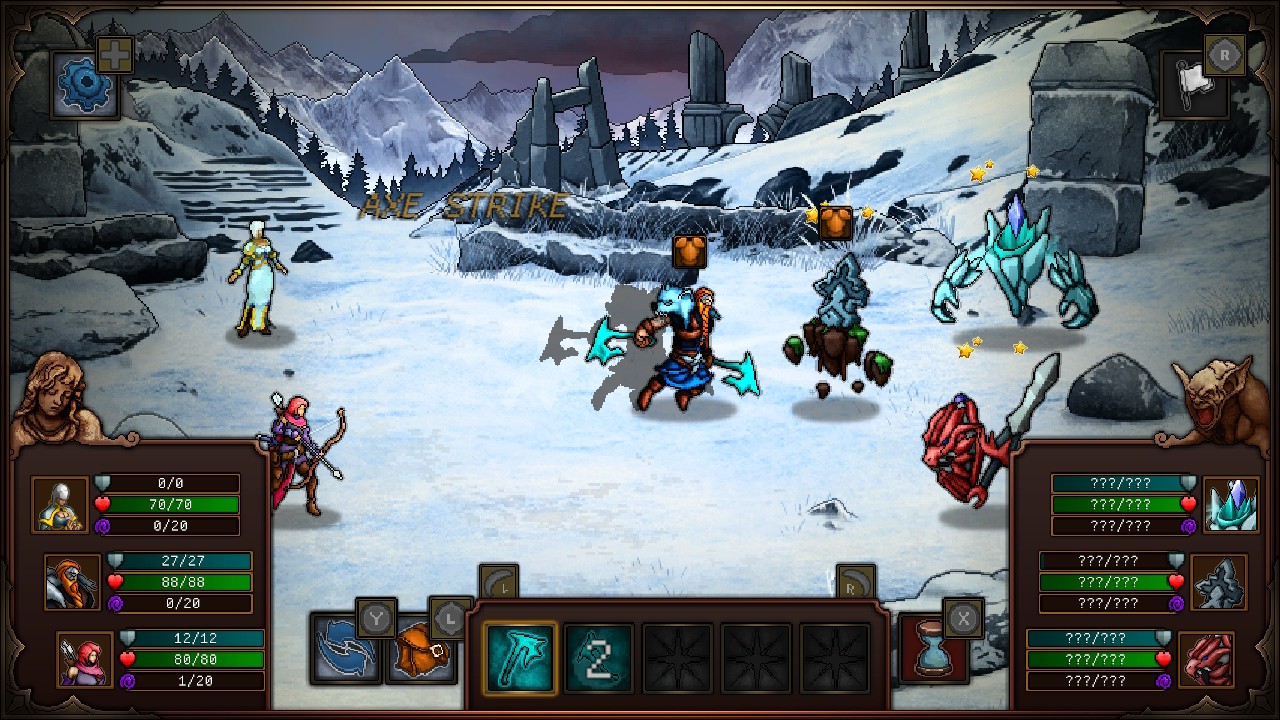 In the belief of Christianity, there are seven deadly sins that need to be avoided. They are envy, gluttony, greed, lust, pride, sloth and wrath. As a religion, it teaches followers not to fall into any of the above tropes. However, especially within the modern eras, they can be a difficult trap to avoid. Fear not though sacred warriors, as help is on hand with Sin Slayers: Enhanced Edition as preaches a release onto the Nintendo Switch.

Developed by Goonswarm and published through Black Tower Entertainment, this role-playing, dungeon crawler, complete with some rogue-lite elements and randomised dungeons, tasks you with building a party and, following the guidance of the Blind Sage, set forth to rid the world of seven Sinlords. Once you pick your party of up to three characters, although you can select from ten different varieties of character classes, you set forth on your first quest within the Forest of Gluttony to seek out the evil Sinlord that rules this region of the world. From your home base, within the sanctuary of the church, you embark on a mission that sees you travel through vistas of mountainous regions, dark forests and foreboding castles, through the randomly-generated levels and dungeons of each of the lords.

Much in the same vein as a turn-based mechanic, you select your party’s movements across a series of grids; although with a more fluid motion rather than the stop-start mechanic employed by many turn-based strategy games. As you move your cursor to your required destination, a series of arrows sets out your path and, tile-by-tile, you proceed along your chosen path to uncover its secrets. However, the way ahead is fraught with danger, from booby traps to enemy ambushes. In fact, there are all manner of discoveries to make as you proceed forth, with tombs scattered around the lands, as well as decrepit forms of fallen bodies; some of which may house much-needed loot, others may simply be lying in wait for some fresh blood to devour on. 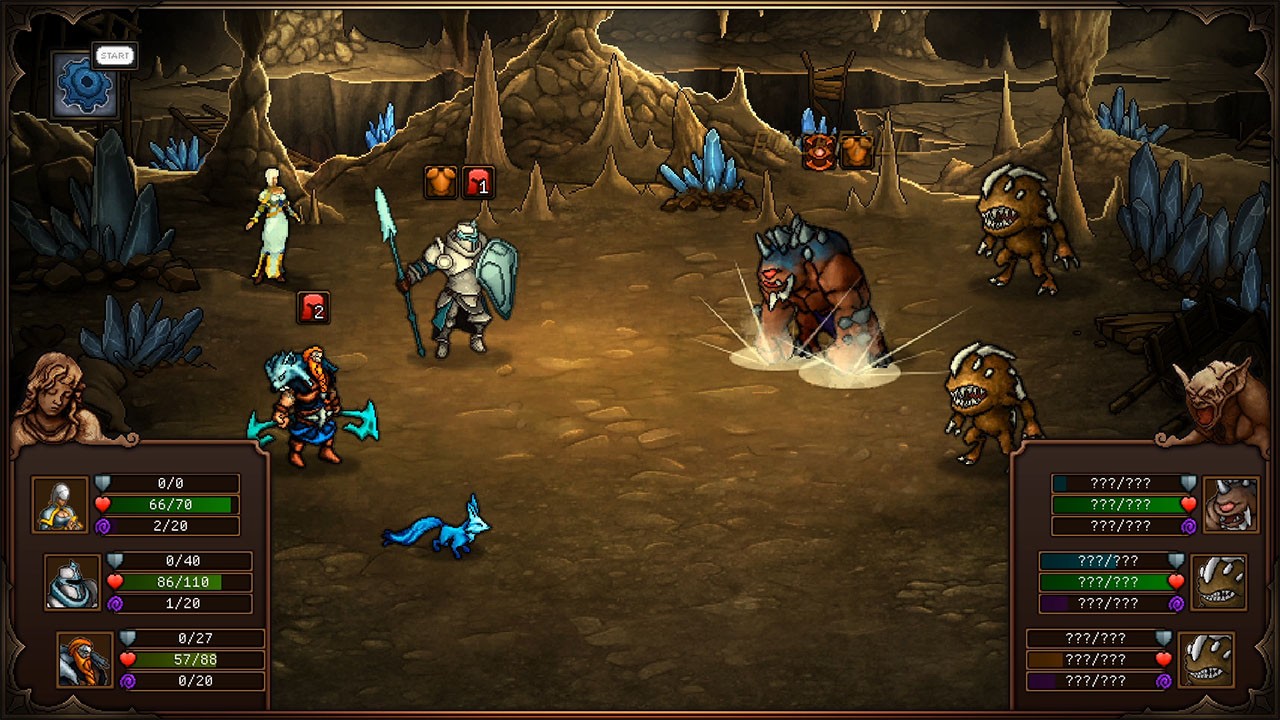 Whenever you activate a square that houses an event, item or place, you are then required to make a decision. Do you pillage the fallen body for loot? Or do you simply walk by? Whatever your decision, your choices reflect upon a sin-o-meter; a gauge that measures the moral or immoral actions of your party. Perform honourably and the sin-o-meter remains low, perform immorally though, and the gauge increases which, in turn, affects the strength of your foes.

Within a matter of time, you’ll undoubtedly come across a tile that holds a number of enemy types. Using the more traditional method of turn-based combat, your party lines up on one side of the screen and face-off against your foes on the other. As each character takes their turn, you can select from a series of abilities, although at first, you only have access to the most basic of combat moves. With each cycle of combat, you gain rage which, in turn, builds within a meter and open up more options and more powerful abilities. It brings a form of strategy to the play, as you need to utilise the powers of your rage at the right time. Strike too early and you could leave yourself vulnerable, as you have to re-fill your meter and revert back to basic attacks.

In order to help even up the playing field though, as you progress through the game, you learn more about its environments and enemies. You’ll be able to read the land around you and an extensive bestiary provides an in-depth analysis of all enemies you come across, labelling their strengths and weaknesses to better equip you for your next encounter. Extended play also brings a variety of other characters with whom to interact with, thus bringing them to join your cause. This brings a roster of character types with which to mix and match your three man team to find a number of combinations that work for you in combat. In fact, during my playthrough, I stumbled across a particularly strong combo (no, I’m not giving it away) that dealt with the majority of encounters I came across. It took a while to get there, but once I found it, it was certainly a game changer. 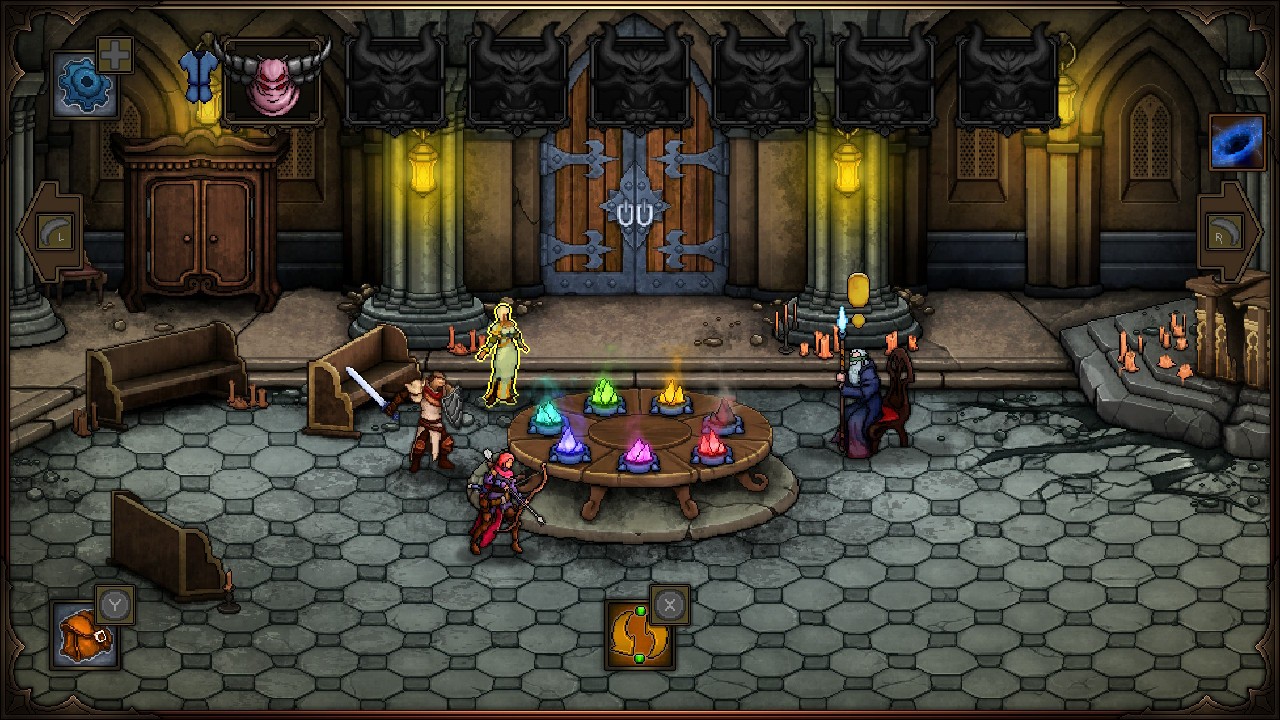 One of the biggest draws of this game, is that it is never set upon a path of linearity. Once you complete your first quest, the world map open up to you and you are free to travel to any location or seek out any of the Sinlords that remain. Each of the levels or regions also promote a freedom to explore; all of which takes place within a level of randomly produced paths and encounters. It adds a significant form of longevity, as no game is ever the same; although the events do remain on  a rigid structure. This in turn, can lead to some repetition as you activate the same events or face a never-ending supply of the same foe, but in large, this is usually the norm with this style of game anyway.

Further longevity is also promoted in a series of systems, all of which have been expertly balanced to provide depth and simplicity in their execution; but only when you have figured out how they work to your advantage. Levelling up characters with battle-gained XP opens up various branches and classes that enhance your rage abilities, crafting using gained loot to build better weapons and gear and its exploration and combat all combine to produce a journey that fully invests you in everything that it does. This is further enhanced by some nice pixel-graphic presentations and satisfying animations that creates some beautiful imagery when in and out of combat.

Overall, Sin Slayers: Enhanced Edition offers something quite different from the norm. Its world is very immersive and the story behind the seven sins is strongly set. Its rogue-lite elements produce a game that lasts over the long-term, especially with the inclusion of all previously released DLC within this enhanced edition. All of its components are finely balanced, making it an easy game to get into, but one that takes time to master; the rewards for doing so though, produce a drastic game-change that keeps it feeling fresh. Another must-own game for anyone with a Switch who loves role-playing within a rogue-lite world.

Sin Slayers: Enhanced Edition repents all of our sins in a satisfying gameplay loop of exploration and combat in rogue-lite world.