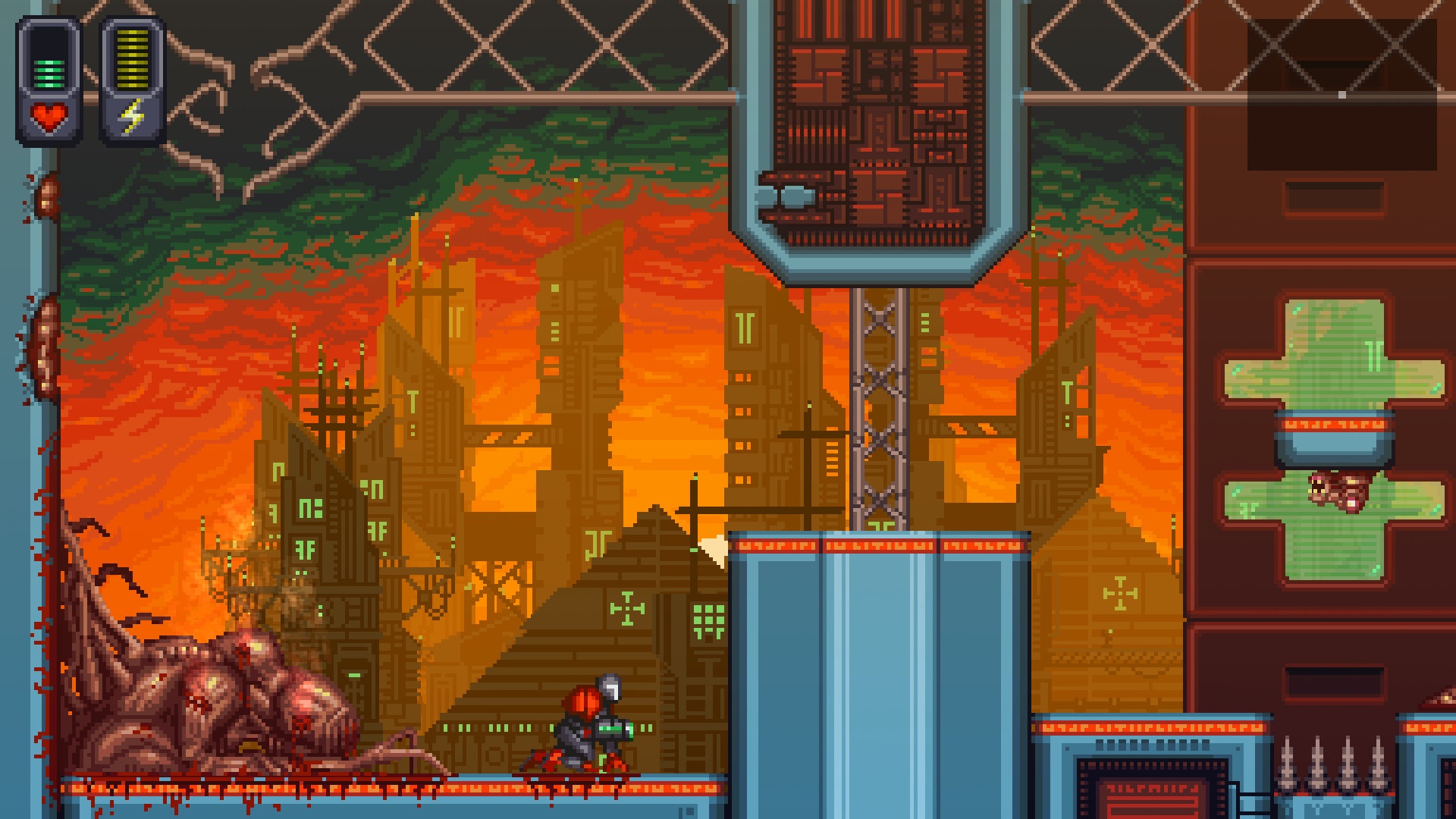 While I’m usually not very fond of comparing two different franchises, it’s very hard to dismiss the notion that A Robot named Fight! shares too many similarities with the Metroid series. This not only happens if you compare the way both games look side by side, but also the way both play.

At its core, A Robot named Fight! mixes elements from the metroidvania genre with permanent death, unlockables, procedurally-generated level layouts, which is something that I haven’t really seen up until this point. From the very beginning, I was intrigued by these design decisions, as they seem to be somewhat contradicting. I’m a huge fan of metroidvanias, and one my favorite things about them is that they tend to take place in these carefully handcrafted worlds, where you progress as you go back and forth, breach through secret passages, and acquire new abilities that allow you to access previously inaccessible areas. Now, while this element is present in the game, it feels a bit off, given the fact that each playthrough takes place in a world where a bunch of pre-made rooms are randomly placed next to each other. 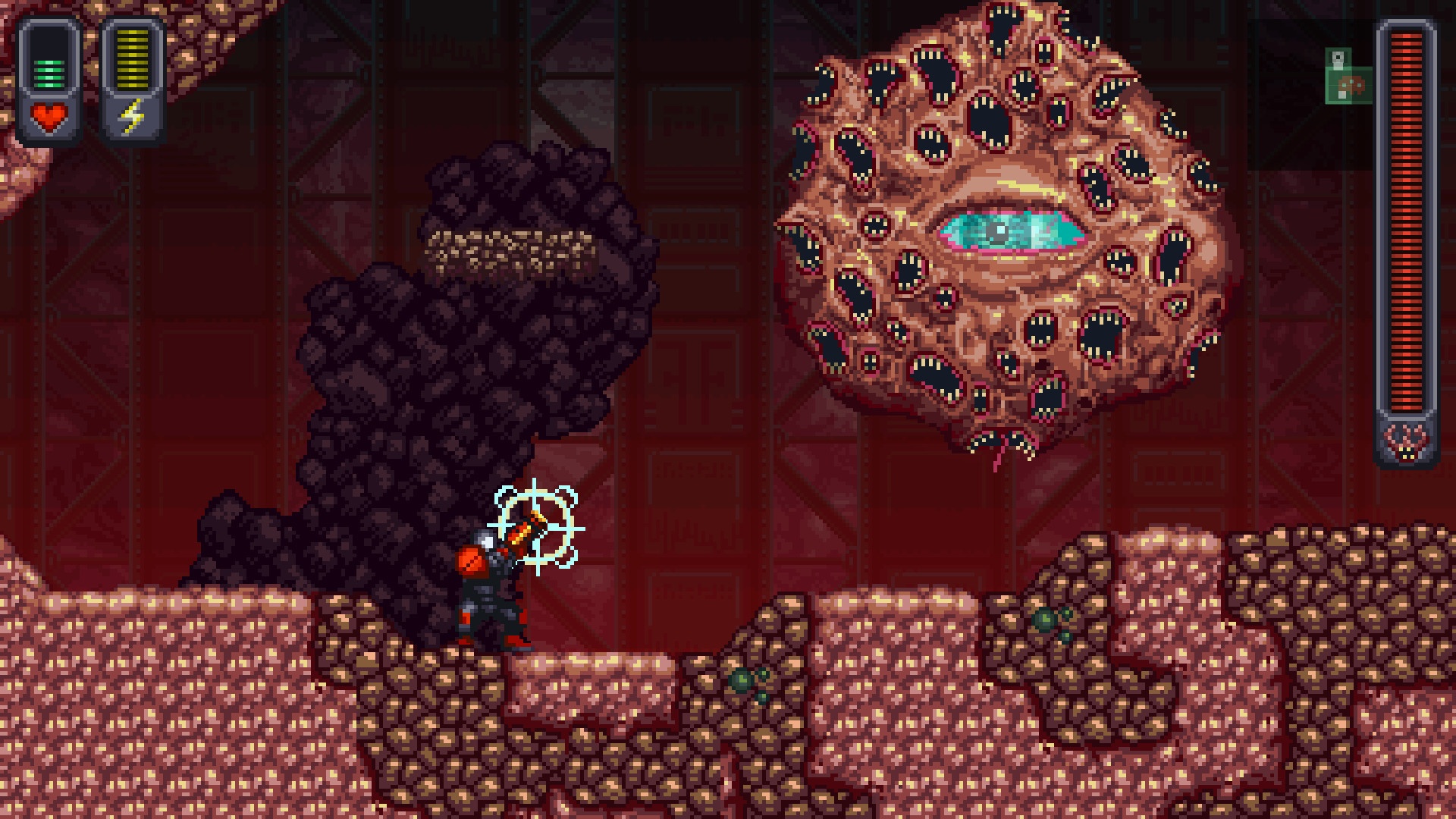 Nonetheless, the game’s premise is certainly somewhat enticing. The game puts you on the shoes of a robot that is fighting an invading force of organisms. For that matter, enemy variety is decent enough, even though I’m not really a huge fan of the way they’re designed, and they’re pretty much split into two groups of enemies, those that keep patrolling a certain route, and those that will chase you once you get within range. On the other hand, bosses manage to keep playthroughs challenging enough, as I found myself pretty much only dying in these confrontations. The game features about a dozen or so of different bosses, all of which look rather gruesome, but they play a vital role in varying the flow of each playthrough so that it keeps the player engaged in an actual tough confrontation. Each one of these bosses has different attack patterns that you need to learn and adapt, and this is always a welcome addition in my book.

The fact that, each time you play the game you’ll be playing on a different world, will most likely not seem something that you need to worry about at first, but the more I played the game the more I felt like this highlighted that something was feeling a bit off. Given the fact that normal enemies are easy to get rid of, playthroughs can both feel rather long for this type of game, or short if you end up facing a boss that completely destroys you. Personally, I don’t have an issue with dying often when playing a game that claims to have some roguelike elements, as those games are often made so that you can learn by trial and error, while some even have persistent upgrades that carry over different playthroughs, but that is not the case here.

The game sure has its fair share of unlockables, which range from active abilities such as a poisonous cloud and a slide, new weapon types such as a rocket launcher, and even items that change your base weapon, by adding fire damage or piercing shots to the mix. More often than not, these new unlocks that you get in each run will grant you access to new areas, hence that is one of the metroidvania aspects. This is pretty much the game’s gameplay loop, acquire the item that grants you access to a new zone, kill the boss, rinse and repeat, until you eventually reach the final boss. This can certainly be a compelling loop if you’re a fan of Metroid or of how this game plays, but it can get repetitive quite fast. 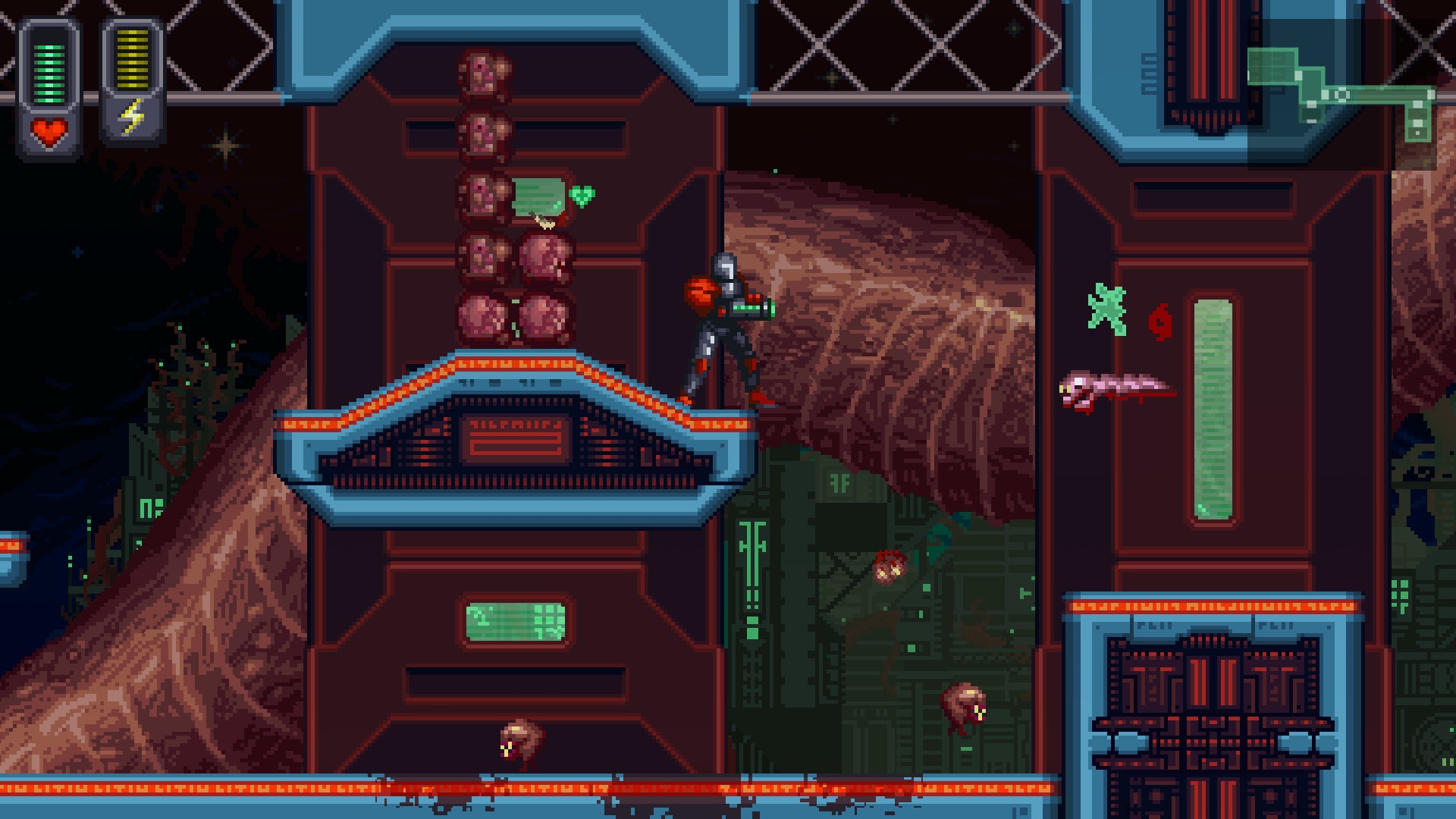 The game doesn’t really hold your hand, in the sense that you’re pretty much thrown straight into the game without any sort of tutorial or introduction to the game’s mechanics. Besides a dying robot that is always at the beginning of each playthrough, and which gives you some random tip, there isn’t anything else that will try and help you. It is also a bit confusing to figure out what the different icons that are on the map mean at first, without first going there. Likewise, the game also doesn’t really explain what the various pickups are until you eventually need them, like when you first visit this robot that helps you craft different things with the resources that you gather.

If you’re looking for a weird mixture of emergent roguelike elements with some metroidvania aspects, this might be something you enjoy. Nonetheless, I feel that the game’s randomness only works to the game’s own detriment, as it gives it some kind of a bland feel, almost like it has no true substance or an engaging world and level design that players can cling to. The game handles perfectly, and if you enjoy Metroid you’ll like how this game handles as well, but other than that the game feels pretty lackluster. In the end, A Robot Named Fight! is not a bad game by any stretch of the imagination, it’s just that it doesn’t really bring anything new or something particularly interesting to the table.