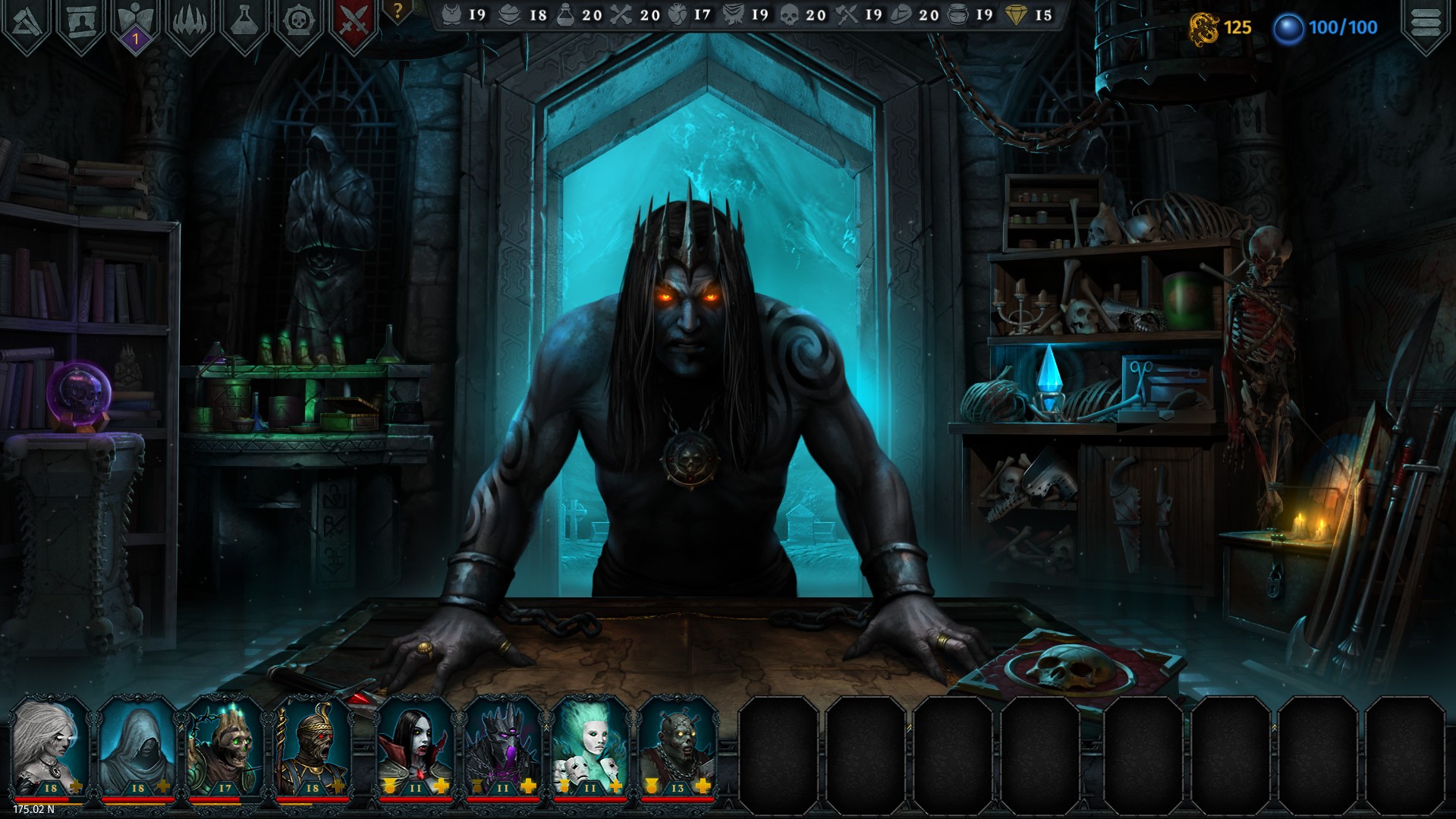 From what I can tell, Iratus: Lord of the Dead is the first game developed by Unfrozen, but it seems that didn’t stop the team from deciding to commit to developing such an ambitious title such as this. Iratus: Lord of the Dead is a dungeon crawler with turn-based combat where you play as the bad guys, more specifically, Iratus, a cruel necromancer who was imprisoned in a tomb a long time ago and has just been able to free himself and rise once again. Now, the time has come for you to raise a new army of minions and fight your way to the surface, where you’ll hopefully put an end to all the puny mortals.

Now, first things first, let’s just address the elephant in the room and say that, in simple terms, this can easily be described as Darkest Dungeon in reverse. The developers have stated that this has been a huge inspiration, as well as Dungeon Keeper. Still, even if you wanted to look at Iratus on its own without comparing it to other titles, I don’t think that’s possible if you have played the games that it was clearly inspired by. With that said, Iratus stands out easily on its own, and for that, I don’t consider that it’s fair to call it a clone, like many people often do.

Although there are other aspects where Iratus is definitely good at, the game’s crown jewel is definitely its combat. As you play through the game and unlock up to 18 different minions, you’ll be able to come up with all sorts of different squad combinations that can go up to 4 minions. Each one of your minions features a unique range of abilities that allows them to fulfil specific roles within your squads. While there are some units that just focus on dealing direct damage, others are more utility based, whether by driving enemies insane, buffing allies and debuffing enemies, or just by being able to redirect incoming attacks and tank them. Also, unit positioning matters, since units tend to have different abilities that they can only use when they’re in a specific spot in the party. Likewise, this is particularly important to make certain synergies work between different minions, as well as learning how all the different enemy types work with one another.

I have found the combat to have that highly addictive feeling of “just one more” fight to it. What would initially start out as a gameplay session that was just supposed to be 1 or 2 hours long, would quickly stretch further than that. As the game progresses and you move along through each dungeon, while you also keep unlocking new spells that Iratus can use during battle, as well as new minions, the game quickly becomes almost like an intricate puzzle game that nearly reminds me of Chess. The reason as to why, it’s mainly due to how you start to ponder all the possibilities, as you try to figure out what the best series of moves in order to swiftly eliminate your enemies while keeping damage to a minimum. 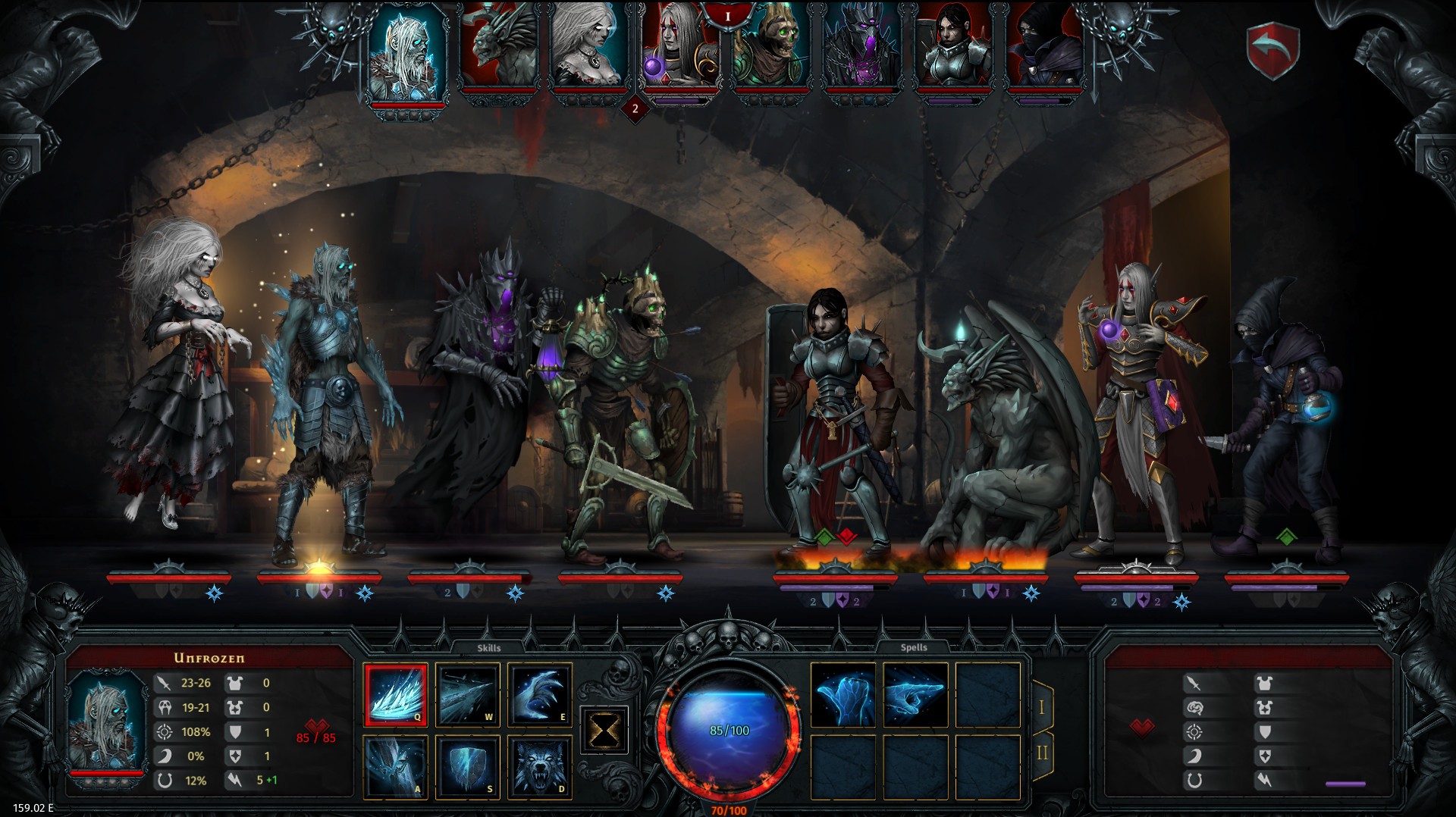 Like other games in the genre, if one of your minions dies during the battle, it’s gone forever. However, thankfully there are 4 different difficulty modes, although you must beat the game in the second hardest mode to unlock the most challenging one. With that said, while the game can be quite challenging, playing through the game first in the easiest difficulties helps you to learn more about the game, and thus prepare you for the ultimate challenge that is Eternal Harvest, the hardest difficulty mode. With that said, the interesting thing about this is that each mode makes the game harder by changing a lot of things. Not only do you get fewer rewards after each fight, but you also get less starting resources, harder enemies, more elite enemies, and you’re unable to recover health outside of combat.

This ties in quite nicely to the game’s resource management layer, which is the game’s other biggest component. As you play the game and defeat enemy squads, you’ll gain resources and items that can help you achieve the ultimate victory. There are basic resources, such as skulls, weapons, flesh, and ectoplasm, that serve to summon new minions as well as to perform certain alchemical operations. There are different types of alchemy that you can perform, but they all involve sacrificing different resources to either get a random new item, to heal your minions, or to regain Iratu’s mana which he uses to cast spells during combat. Items come in the form of artifacts, which are essential items that you can equip and provide either minion or Iratus specific bonuses.

Furthermore, although minions gain experience as they fight, you can also instantly increase their level by implanting them with more experienced brains or letting them train in the arena, one of the buildings that you can construct back at your base of operations. As minions level up, you’ll be able to upgrade their abilities and increase their stats, which is paramount to achieve victory the closer you’re to the surface. Besides that, everything ends up being connected through the Graveyard, which is your base of operations. In the Graveyard, you can construct buildings and allocate minions to work on them in order to find resources, gain more experience during combat, heal minions back to full health, amongst a few other things.

If you play your cards right, you might be able to max out all of these systems in a single complete playthrough. However, there are incentives to replay the game, besides being able to take on a greater challenge. For instance, some minions can only be unlocked after beating the game in a specific difficulty, and you won’t always be facing the same bosses throughout the game, it might take a few runs until you see every enemy that the game has to offer. With that in mind, the time that takes to complete a full playthrough can vary, depending on the route that you take throughout the dungeon. While you may choose to take the longer route due to better rewards, you can also opt for a shorter route that doesn’t provide as many rewards or enemy encounters. With that said, you can easily spend 2 to 3 hours on a single floor, and up to a total of 15 hours or so to complete a full run. 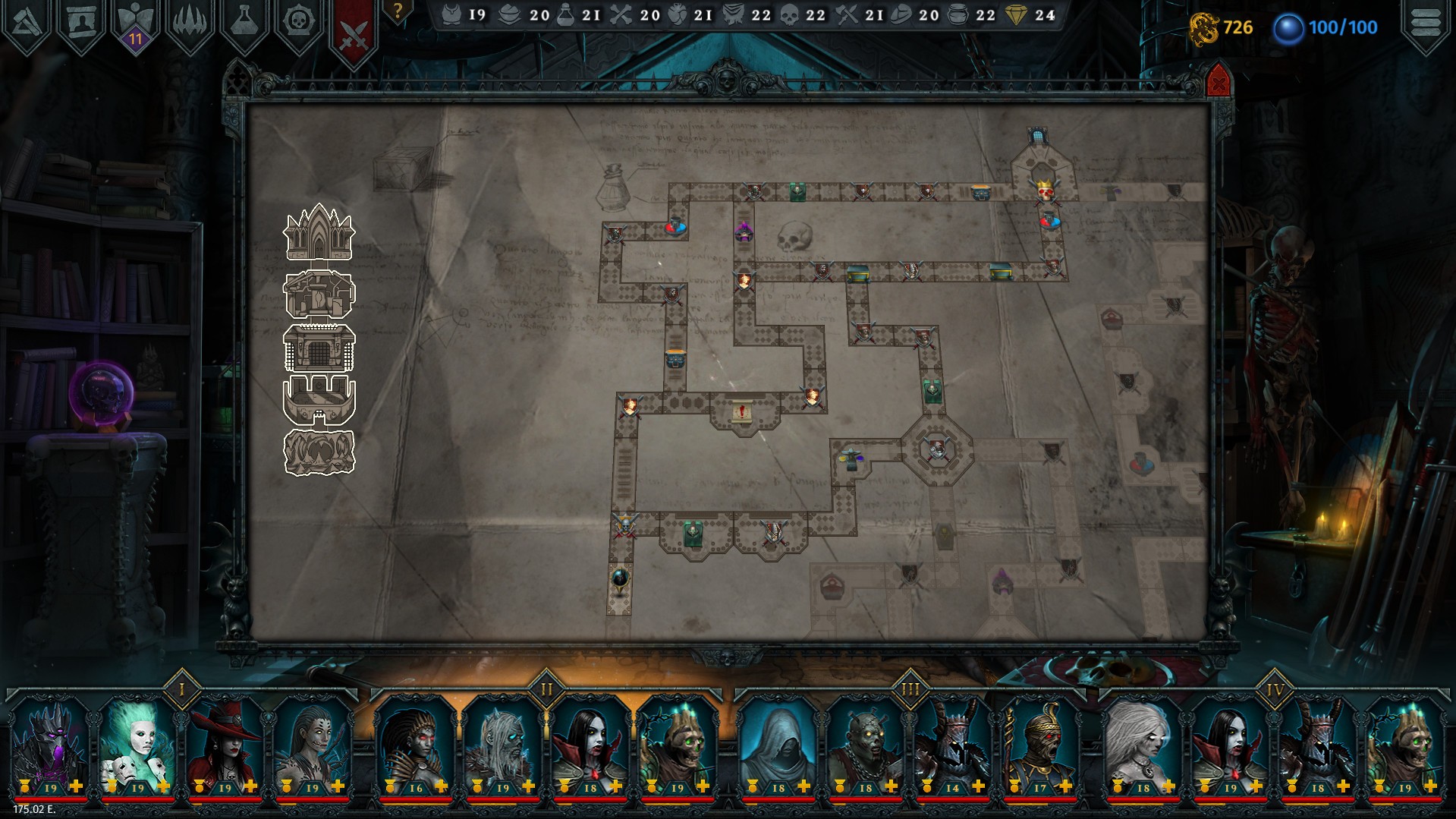 Now, while I’ve enjoyed my time with Iratus for the most part, the game isn’t exactly perfect. I can see how some people might feel discouraged when playing the game on the easier difficulties, as after a certain point you can pretty much roll through every enemy squad that the game throws at you. The game is actually quite difficult, but that side of the game only really shines once, or if, you ever get to play on the most challenging difficulties.

I understand if some people might just want to play games for the story, but if that’s the case, then I don’t think that this is the game for you. The times when I really enjoyed playing were when I was being challenged at every single turn, so if you’re into that, then I think that Iratus might be up your alley. On top of that, while I’ve absolutely adored Iratus on its own, the ending is extremely anticlimactic and the game just ends in a huge cliffhanger. Those who invest themselves in the story will most likely feel disappointed by this. With that said, I just can’t shake the feeling that this was done in a way to set up the stage for the game’s first DLC, Wrath of the Necromancer, as this not only adds a new final dungeon, thus upping the total dungeon number to 6, but it also adds another ending.

Ultimately, Iratus: Lord of the Dead features various mechanics and gameplay systems that fit perfectly within the game’s theme and setting. Nothing feels forced or as if it just exists just for the sake of fulfilling some arbitrary need. This only goes to show how well everything works together, the combat, the resource management, and the theme. As a whole, it’s a pretty compelling package, but I’m afraid that the game will never get the audience it truly deserves. Whether you’re a fan of turn-based tactical games, or if you enjoyed Darkest Dungeon but you want something different that still feels familiar, Iratus: Lord of the Dead surely has the potential to not disappoint you. Despite some shortcomings, I honestly can’t recommend it enough.

Iratus: Lord of the Dead Review

Iratus: Lord of the Dead is a dungeon crawler with turn-based combat where you play as an evil necromancer. Think Darkest Dungeon in reverse.