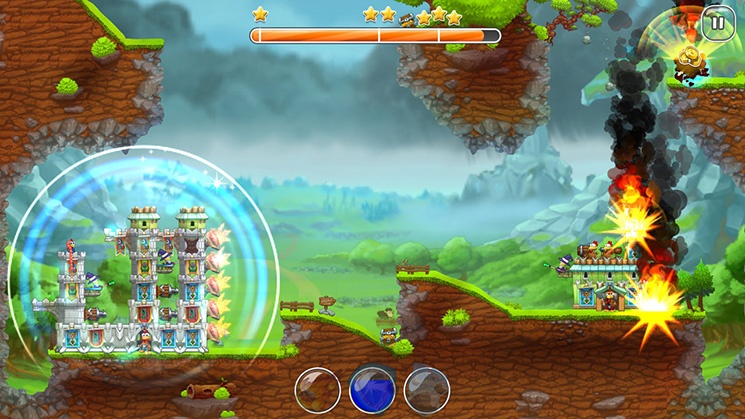 Have you ever heard of Moorhuhn, a video game character who originated from Germany and has spawned more than thirty titles? If you have, then full marks on being a hardcore gamer. Admittedly, I didn’t have a clue who he was until I learned that he was later distributed as Crazy Chicken; spawning releases on the PC, PS2 and DS. Well, now he’s back in Young Fun Studio’s Moorhuhn Knights & Castles, out now on the Nintendo Switch.

Despite his German origins, this iteration of Moorhuhn now sees him with a more, distinctly Scottish flavour with tartan, kilts and bagpipes. There’s no explanation for this sudden change of nationality, as there is no backstory to follow apart from the fact that, one day, your tiny hut is attacked by an invading force on the lush, green highlands of your home setting. Under the advice of your Grandfather, it’s now up to you to bolster your defences and build up your armaments in order to battle your opponents into submission.

The main gameplay elements of Knights & Castles follow the same template as the Angry Birds series. And why not? After all, it’s been a highly successful franchise that has developed a massive fan base amongst the young and old. However, the developers have incorporated a tactical element into the gameplay here, injecting a huge amount of depth and fun into the game which involves a lot more than just flinging your feathered friends across the landscape. 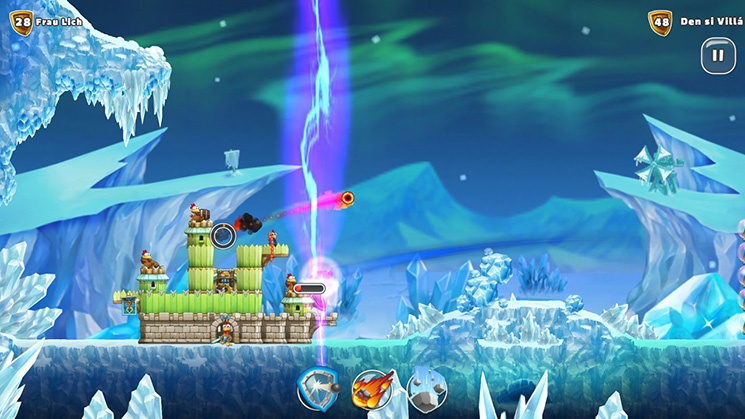 Through a series of easily understandable menus, you begin to add to the structure of your small hut by adding various elements such as walls, roofs and bridges in order to protect, what has now become, your throne room. You then add various weapons, such as cannons and catapults in order to repel any future attacks. However, these structural elements are severely limited by three factors: the amount of gold you possess, the number of available slots on which to build and your current XP level. Once you have erected your basic defences, you then proceed across 36 levels that sees you battling over icy plains and lava filled landscapes.

Each level sees you involved in skirmishes that rewards you by gaining gold and XP, this in turn increases your funds, level and adds build slots onto which you can further expand your defences. However, these skirmishes don’t just simply involve you in defeating the enemy that is attacking you. As with Angry Birds, each level awards you with stars, up to a total of three per battle, with a timed meter that determines what level of reward you earn based on how quickly you gain victory. This can be achieved by meeting one of the two rules of engagement; either force the enemy king into surrender by destroying all of his armaments or demolish the throne room within the enemy’s castle; all of this whilst the enemy tries to do the same to you.

All of these different elements combine to produce a real sense of urgency with each battle, especially as each level brings with it a progressively more difficult enemy to defeat. All is not lost though, for as long as you have the required funds and space upon which to build, you can develop some quite impressive looking structures that range from wooden forts to fully blown castles. You can also upgrade, or even rebuild, what you have already built to further strengthen your fortifications or increase the damage of your firepower. The more you level up, the more you can build as you begin to unlock new buildings, weapons and power ups; some of which can have very rewarding effects. It soon becomes apparent, however, that the funds with which to achieve these upgrades come in a very short supply; especially when you take into account the repair and maintenance of your current structure after a particularly hard or failed battle. 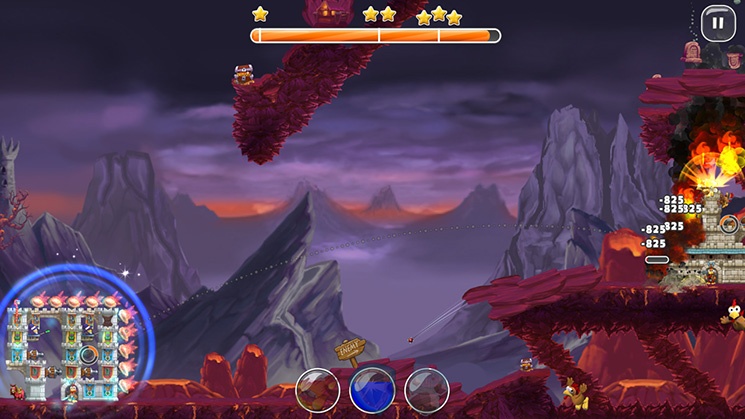 It doesn’t take long before your progression reaches a level where you are confronted by an enemy that you have no choice but to submit too. With these sudden spikes in difficulty, the game forces you to go back and replay previously fought battles so that you can scrape together the necessary funds in order to progress. However, with an upgraded arsenal from what you had when you first encountered these levels, these battles are a lot easier than previously fought. This allows you the luxury of seeking out those elusive three stars and various treasure chests that litter the landscapes, which can add a real bonus to your bank balance. Unfortunately, though, this develops a repetition that soon becomes very stale, especially when you take into account the frequency in which you have to go back through the same old levels. Speaking of repetition, I’d strongly advise you to turn off the soundtrack too, as all it consists of is a set of bagpipes that plays constantly on a loop and becomes very irritating extremely quickly; unless, of course, you like that sort of thing.

The developers have promised a real-time multiplayer addition and a new set of challenges with a free update coming in the spring of this year. This will certainly add an interesting perspective to the game, as well as add to its content, but whether it will be enough to counter the repetitive nature of the game remains to be seen. Control wise, the game plays beautifully whilst in the Switch’s handheld mode. The touchscreen offers a good deal of accuracy when firing your weapons and offers easy access to the various menus. When docked though, the control scheme is simply awful. Navigating menus is very cumbersome and when it comes to playing the game, you end up fighting against the controls as well as the timer and enemies thus increasing the difficulty of the game to nigh on impossible.

The graphics serve their purpose, being bright and colourful, but there is nothing ground breaking here. In fact, for me, this sums up the whole game really. There is nothing particularly new here and, despite the tactical elements to the gameplay, doesn’t offer anything we haven’t seen or played before. If you’re a fan of Angry Birds, then there is a lot on offer here and definite fun to be had. The game suits the portability of the switch well and is perfectly suited to the casual gamer. However, if you answered yes to my original question and are well aware of who Moorhuhn is, then I’m not too sure, being a hardcore gamer, that this would be a game that will hold your interest for long.