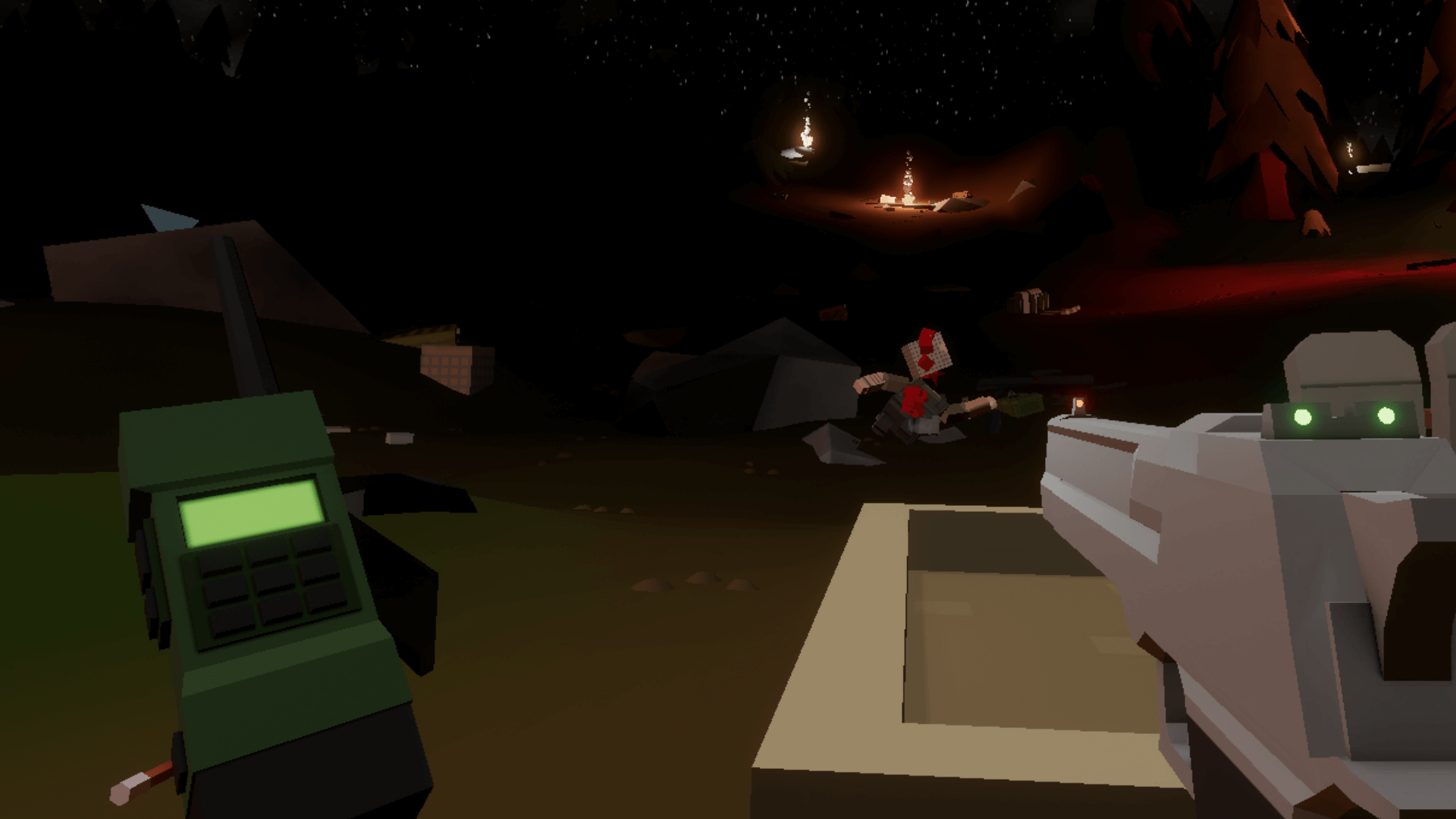 I’ve not been a strategy genre fan to be honest, I just want a game I can switch on, briefly learn the controls and then get engrossed. So, the idea of spending hours upon hours of placing and planning before pressing play on my master plan only for the console A.I or some online player who has spent his entire youth mastering strategy to the point of insanity to wipe me from the game’s history within a few short plays has never appealed. Don’t get me wrong I like a challenge but most games within the strategy genre require a lifetime of playing to achieve anything and I’m a “play and go” type of gamer.

So, when I was asked to review the PSVR port of a strategy game from Developer RocketWerkz I was a little reluctant, but being a VR fan, I agreed and now I can safely assure I will no longer dismiss a game because of its genre. The PSVR title in question is “Out of Ammo” and it has managed to convert the non-convertable. Originally a Vive exclusive developed by RocketWerkz, it’s now in the good hands of VR veterans ZenStudios to bring it over to Sony’s PSVR system. Placing you in a god like position from the start you are required to build and place your battle defences around a large mapped area to protect your base. Once these varying defence options are to your liking the onslaught commences. You can issue various orders and commands for specific defence points or even opt to defend a certain position yourself in the first person.

The presentation of “Out of Ammo” is not what I expected from this type of game, I haven’t personally played too many but I’ve watched enough online to know battle strategy games have a high realism aspect to them while Out of Ammo lends its presentation more to a Minecraft or Lego title. This may discourage veteran Strategy gamers but the planning and defence aspects are expertly devised and require some serious thought put into it if you want to score big. 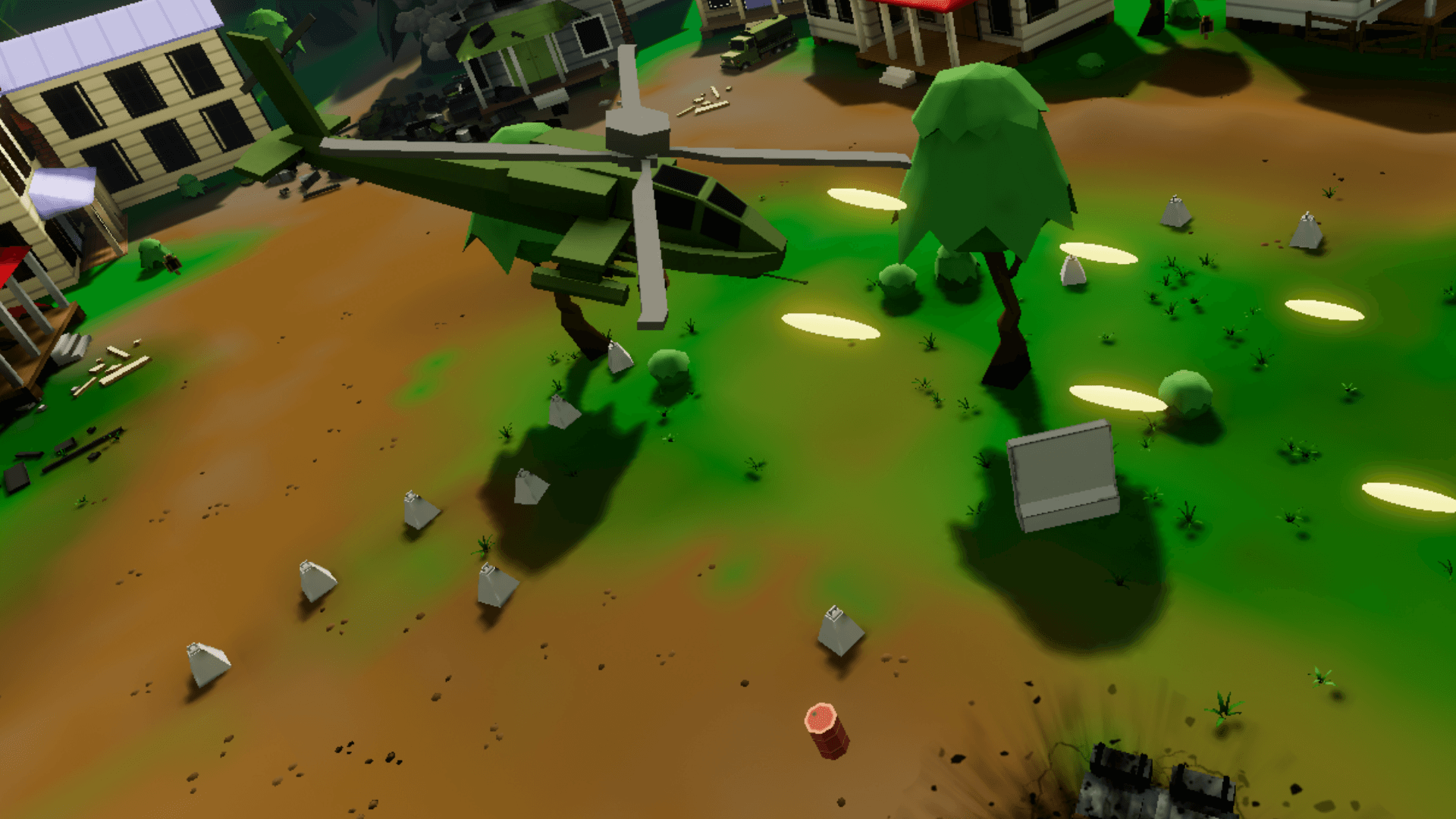 Surprisingly the main challenge in Out of Ammo isn’t as the title suggests, it’s the lack of rest periods. Every wave of enemy follows each other and there is no time to reset or re-plan, it’s just wave after wave of attacking forces ensuring you never spend too much time getting comfortable in one soldiers boots or sitting in one defensive position to long. You are constantly dropping in and out God mode (as I call it) to view the enemy’s charging positions, hoping to place yourself effectively and efficiently. However, as a non-strategy gamer I was often drawn to the first-person aspect of Out of Ammo which for me was pure joy (with a little frustration). Giving you the choice of five different class of soldier all with different weapons (which surprisingly do feel different).

Within the five options three have specific traits, the medic can heal the fallen, the engineer option can rebuild the crumbling defences and the rocketeer is armed with the powerful RPG’s. I did spend most of my playtime swapping between these, often leading me to neglect my planning and building duty’s resulting in a very short game. And to be honest, the reason for this was the fresh take on the first-person shooter Out of Ammo offers.

And to ramp up the VR realism you can hide behind objects and pop out to shoot the oncoming enemies, but make sure you have pre-placed stocks of Ammo if you decide to settle in one spot. However, if things do get too intense you can drop back into God mode and call in some air strikes to slow the attacking units. For me it’s these simple but effective game mechanisms that raises Out of Ammo’s FPS side above more familiar FPS titles. Sure, it doesn’t have the stunning visuals of COD or Battlefield but it has some serious and tense gameplay.

Game modes in Out of Ammo are nothing new, neither Co-operative Multiplayer or free play really need detailed explanation. The co-operative multiplayer is for up to 4 players’ but I’ve been unable to test this option as my review is being carried out before the official release and obviously no one is online but judging by what I’ve played in the single player it’s going to be fun. Free play currently contains eight maps to build your defences and all offer varying landscapes including a city, desert and canyon, even a random Alien themed option has been included. 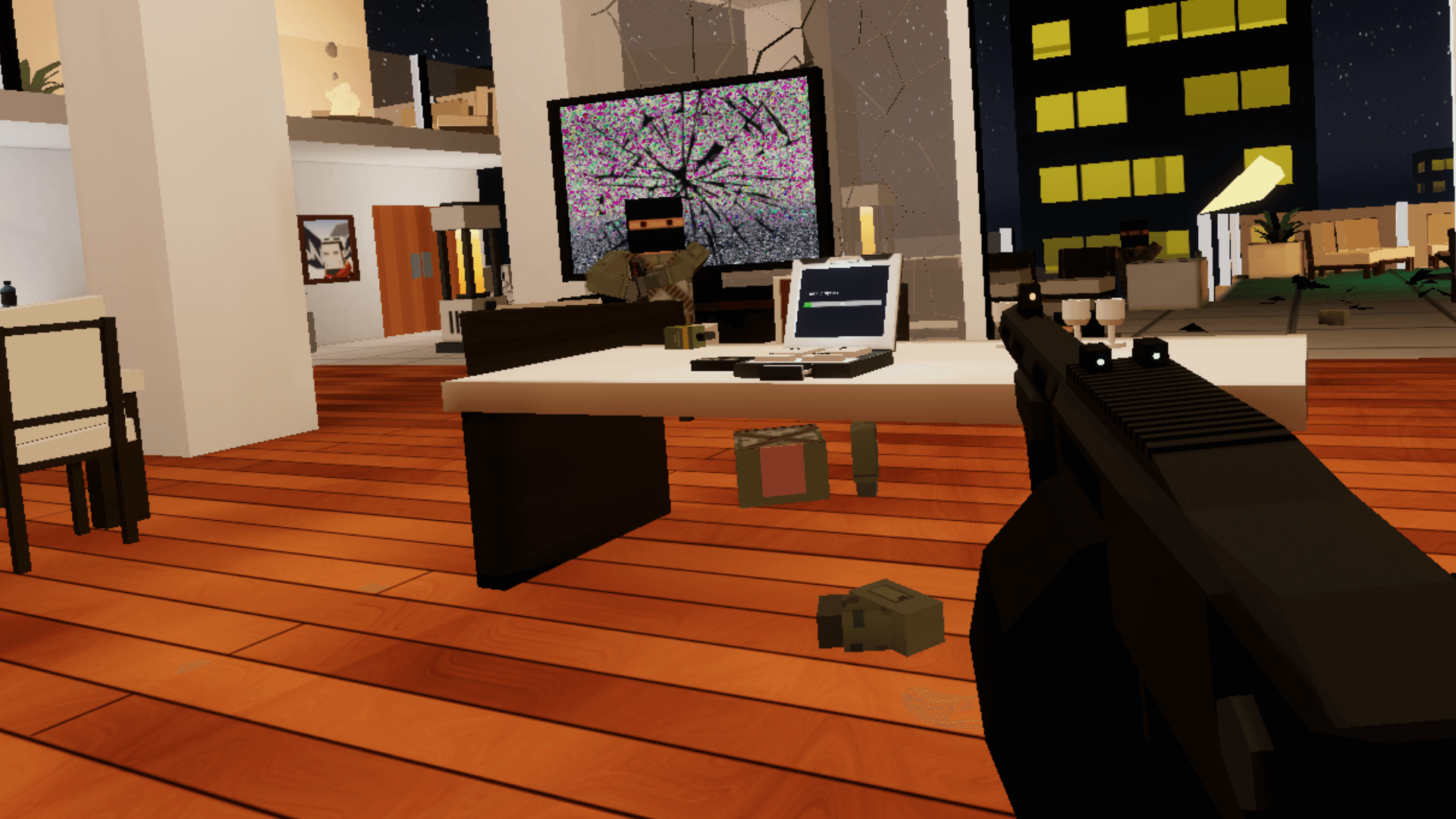 However, a nice touch by Developer RocketWerkz has been to include a single player option that removes the strategy side of the game completely and allows you to play just in the first-person aspect (to bring over the FPS fans maybe and a welcome rest bite from being commander). These three first person only missions vary in challenges, one sees you defending your position after a crash with bare minimum ammo crates dotted around the crash site, another pit you against an attacking team armed only with a shotgun but this must be done while hacking a PC on the rooftop of a very tall building. But the best of the three in my opinion is one called OverWatch that has you playing Sniper protection to a crashed helicopter while all the survivors await rescue.

However, Out of Ammo does have some minor issues that become irritating at times. The motion controller tracking is good but far from perfect, having the joy of reloading a sniper rifle with individual bullets or quick swapping an SMG magazine ruined by some shocking tracking can get very frustrating and the Minecraft graphics can get a little blurry with sudden movement especially through scopes.

Overall though Out of Ammo offers nothing new to the Strategy genre but then I’m not really an expert so some may disagree, but as an FPS it offers a simple and effective slice of realism, even if shooting at Block animated characters dulls the effect slightly. But as a non-strategy gamer Out of Ammo is a comfortable introduction to the genre without the intense aspect some similar game types tend to bring. And because of this and the FPS elements I have now widened my gaming genres to include Strategy.

All in all, Out of Ammo is fun and frantic but I personally feel it’s missed an opportunity, if the essential gameplay element (motion control) was more accurate (maybe a hardware more than a software issue) and the graphics more on the realistic side then I would certain upgrade the final score by a point. But I did find Out of Ammo to be a challenging base defence title and what it lacks in beauty it gains with its simple but challenging gameplay, fantastic FPS elements and great VR implementation. It offers hours of fun to both new Strategy players and veterans of the genre and thoroughly deserves a place in your PSVR collection. Consider me converted.