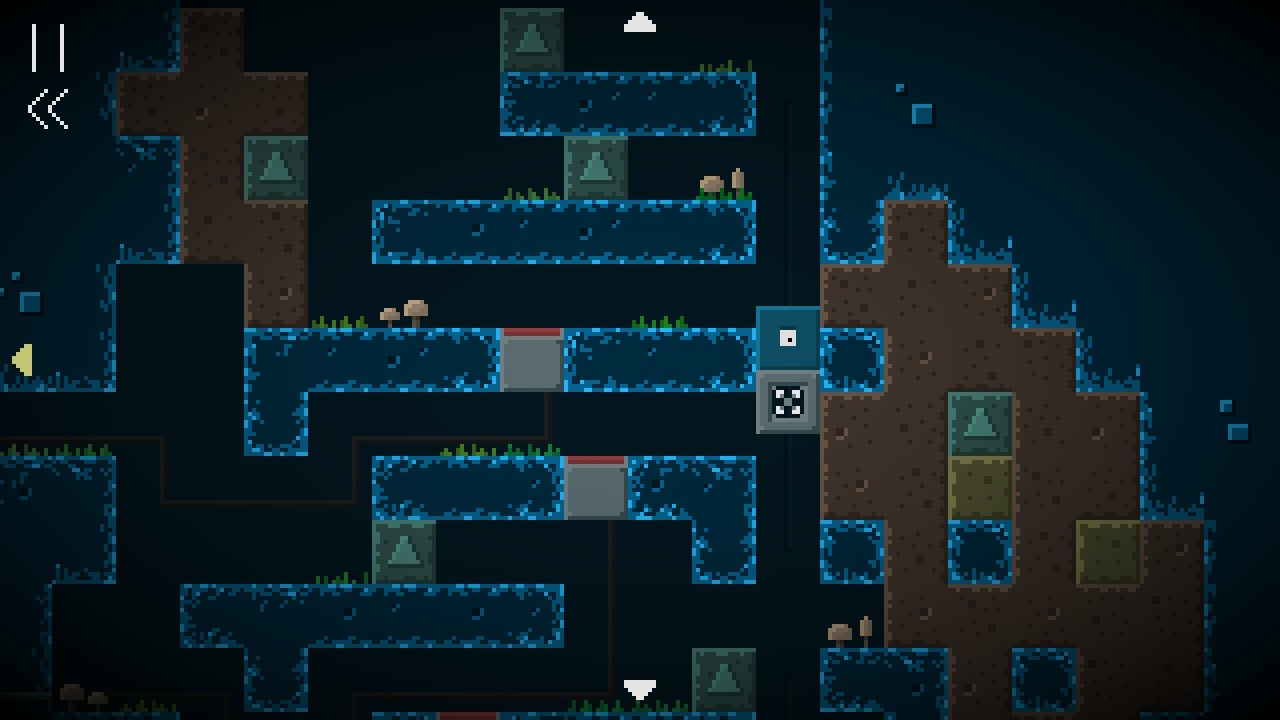 Qbik is a simple puzzle game that comes to us in the disguise of a platform style adventure, and the good folk at Forever Entertainment have decided to bring it to the Switch. Before I say anything else, I have to commend Forever Entertainment for moving forward with bringing some of their titles to this Nintendo console, because it can’t be the easiest thing when your games are generally not treated as well as they should be. A quick search online for Qbik may bring you to the Nintendo product page, or it may bring you to the Steam page, but, in those first few results, you will see keys for this game posted on the storefronts of various resellers. Now, I can’t attest or really give my opinion one way or another on gray market key selling, but, as a developer, it must suck to see your game being re-sold for pennies on the dollar when you see zero percentage of those sales. So kudos, Forever Entertainment: keep up the good fight.

Anyways, Qbik starts us off with a weird setup regarding the existence of matter and life in the universe as presented by a single white pixel, which, over time, expands to more and more. It’s kind of a bizarre, very existential thing that braces the player for something with a lot of metaphor and insight, and then…we meet Qbik. He’s a blue block with one eyeball and a mostly upbeat outlook in his life. His objective in the world is to eat yellow blocks. That’s all. He wants to eat all the yellow blocks that exist within a level, and then he’s gonna go do something else. Not really sure what else to make of it other than what I’m told here, but there you go.

Qbik plays as a simple puzzle design game, in which our geometric hero has zero abilities other than to move in a straight line and consume the blocks that are in his absolute immediate vicinity. To be clear, this means that, if something is to his diagonal left or right, he’s completely out of luck. And since none of the levels are convenient flat spaces that simply ask you to move left or right (well, beyond the first two) that means you and Qbik need to work together to plan out a proper strategy, because, once Qbik digs his way down (again, by eating blocks) he has nowhere to go but further down. 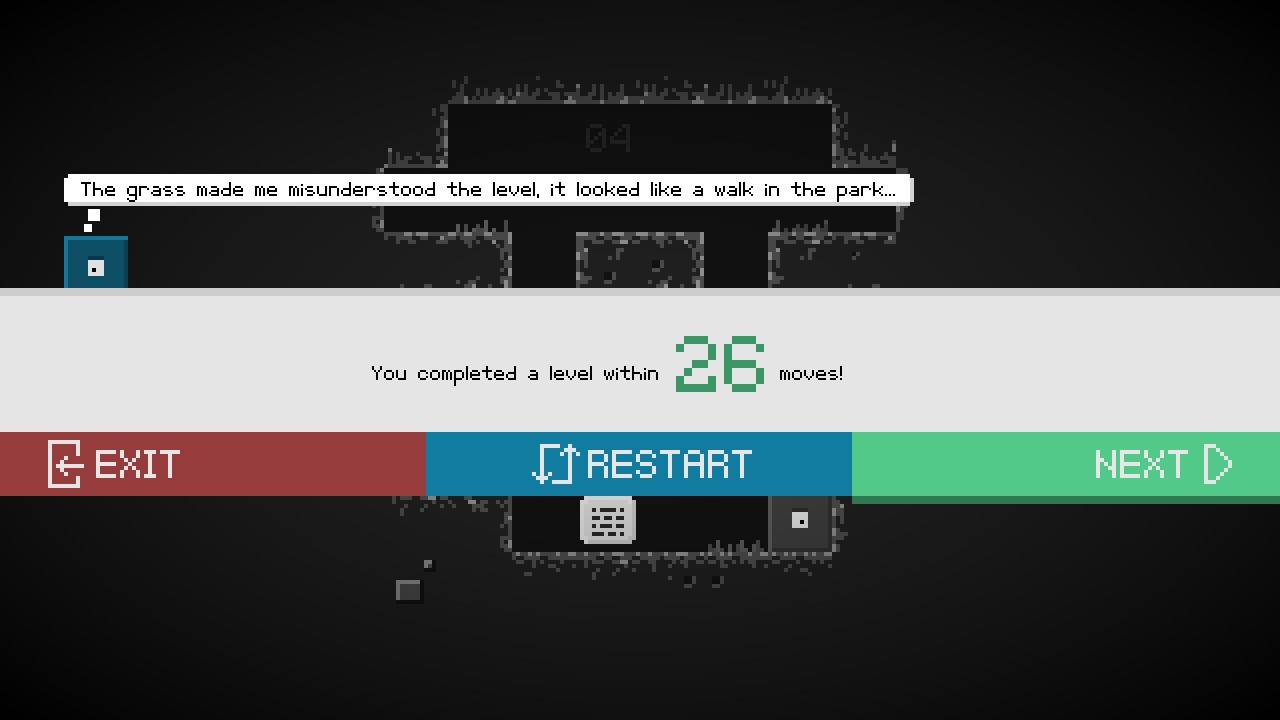 Conceptually, Qbik is the equivalency to doing the word jumble on the back of the Saturday paper while you eat your Corn Chex (easily the best Chex flavor). There’s something here that requires a bit of concentration, but not so much that you’re going to forget how to get something from your hand to your mouth without looking at it. You can pan the entire stage before you begin chomping away, and Qbik cares way more about the number of moves you take than the amount of time you spent. Once you start going and you have the path clear, there isn’t going to be a lot of deception or “oh damn, didn’t expect that,” with the small exception being some of the later and arguably trickier levels. For the most part, it’s simply remembering the core rules: gravity affects some blocks, not others, and you can’t jump or climb ledges. So if you’re going to eat somewhere, remember that’s your new primary direction, and it’ll be hell to have to reset the whole level.

Actually, Qbik does have some great mechanics that exist outside of the gameplay. Sure, you can reset the whole mess once you’ve totally screwed up the plan, but why take it that far? You can simply rewind your last move and try again, something that is done in a very appreciative “roll the tape back” effect. It looks cool and actually matches the title of “rewind” quite well. Qbik is aware of how many times or if you ever needed to rewind a puzzle, and he’ll comment on it at the end of the stage, but don’t worry about blue boy, just focus on getting the task done. Rewinding is cool and done well here and I really liked it.

I wasn’t a huge fan of Qbik himself, however. For one, he’s trying very hard to bring that “creepy cute” vibe into the game, but I don’t think he falls quite far enough into one slot or the other: he just comes across like a cyclopian cube. Additionally, even though he doesn’t speak, he constantly has word/thought bubbles hanging over him to let us know how many blocks or left, or, even worse, his epiphanies for the moment. Simple stuff like “gotta eat those blocks!” or “Let’s make sure to do our best!” It’s weirdly off putting, like I’m playing a game with Clippy that doesn’t involve Microsoft Word. Then, at the end of the stage, he always has an affirmation about how he did his best or the next time could be better, and I just wasn’t a big fan of this kind of setup. Like, I know, the puzzles are meant to test for perfection but we also don’t want people going crazy trying to nail the absolute minimum number of moves. I ended up just jamming the button as fast as possible to skip to the next stage so I didn’t have to read what he was saying. Trust me, in all the levels where I read what he said, it was never helpful or insightful for me, it seemed more for him, which is kind of endearing but not enough to make me allow it. 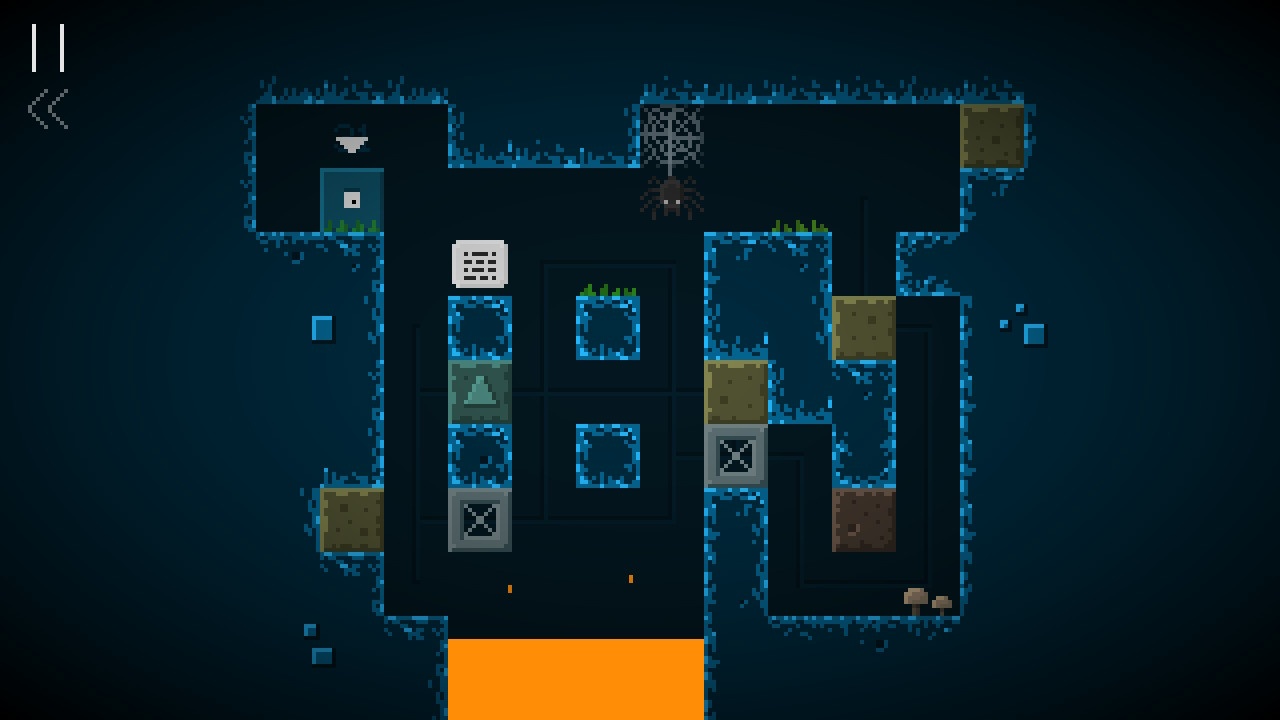 Graphics and performance are about on par with what you’d expect from a pixel art puzzle title in this day and age. Of course, it runs fantastically on the Switch: it’s not like I had frame drops or stutters in any way. And I did appreciate the cavernous aspect of everything, especially once the levels got big enough to require panning to different sides in order to get the full scope. The game felt like it constantly wanted to impress upon you how big Qbik’s task really was, and I think it did that in a spectacular fashion that actually made me nod and murmur when I got to certain stages. This could have been something incredibly quick and bland, but there really was a lot of thought into the design of it all, and it works out well. You could have had Qbik set in any number of places, but the underground just works so well for the gameplay and the setting that I have to tip my hat.

Qbik is relatively short, especially if you do it all in one go, but there’s replay value to be had for perfectionists. Puzzle fans will find some enjoyment here, and even casual players might gravitate towards the simple setup with good execution. And, not to be crass, but that price tag is ideal for anyone who wants a quick fix for the weekend but doesn’t need a game to carry them into next month. I say, if the blue cube calls to you and you wanna test your hand at block consumption, come on in, there’s plenty to be done.